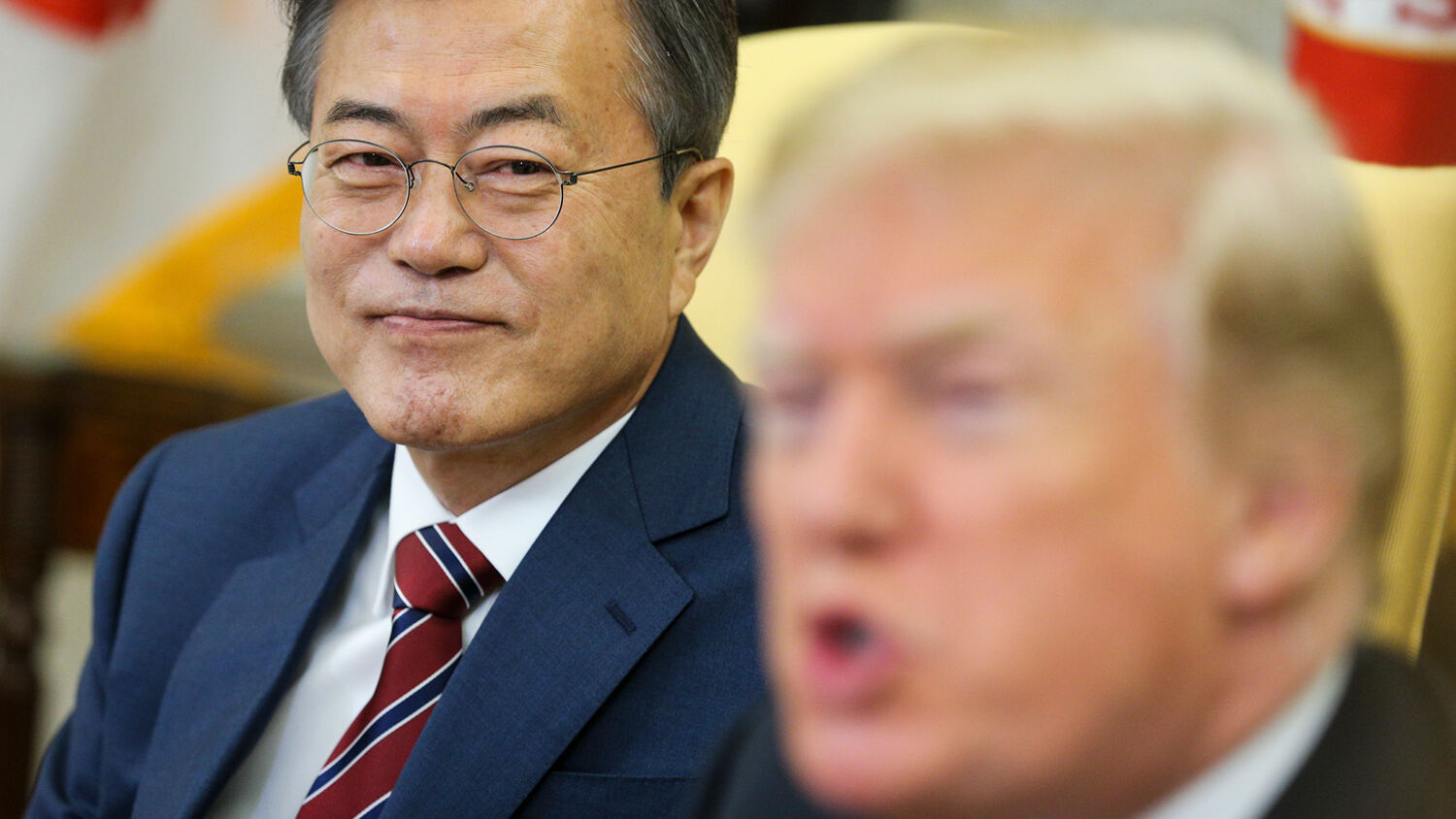 South Korean President Moon Jae-in listens as President Donald Trump speaks during a meeting in the Oval Office of the White House in May 2018.
Oliver Contreras-Pool/Getty Images

South Korea’s military alliance with the United States is coming under increasing pressure in a trend that could culminate in a colossal loss of America’s power in East Asia and a massive victory for China.

It came to light on October 27 that the phrase “keeping the current level of U.S. military personnel in Korea” had been omitted from the communiqué published after the latest Security Consultative Meeting between South Korean and American officials. South Korean Defense Minister Suh Wook suggested during a parliamentary inspection that the omitted phrase means the 28,500 U.S. soldiers stationed in the country may soon be reduced to a smaller number.

“This is the first time,” South Korea’s Dong-A Ilbo wrote, “that the South Korean military authorities have issued a statement indicative of a potential reduction of U.S. forces on the Korean Peninsula.”

The news came just two weeks after South Korea’s ambassador to the U.S., Lee Soo-hyuck, addressed the South Korea National Assembly’s Foreign Affairs and Unification Committee, saying: “Just because Korea chose the U.S. 70 years ago does not mean it has to choose the U.S. for the next 70 years, too.”

One week before Lee’s comments, the chairman of South Korea’s joint chiefs of staff, Gen. Won In-choul, told the South Korean parliament that wartime operational control (opcon) of South Korea’s forces must be transferred from Washington to Seoul. This system constitutes what the Brookings Institution calls “the most tightly woven system of integrated command and control the United States possesses anywhere in the world.” But Won wants the U.S. to quickly hand over power to Soeul. He said: “If the opcon transition becomes a distant aim, or is delayed too much compared to what we expect due to the conditions, those parts need to be revised or supplemented.” These sentiments were echoed in an October 27 editorial by an assistant chief of staff for U.S. Armed Forces–Korea.

Brookings points out that if South Koreans get their way, the move could have a domino effect with other U.S. allies. “If South Korea is to wrest away the top command position in the alliance from American allies, where will the process stop?” it asked in January. “Why would Britain, France and Germany not all demand their turns at running nato command in Europe, for example?”

Meanwhile, a special adviser to South Korean President Moon Jae-in said the nation should not participate in the nato-like military alliance in the Indo-Pacific, known as the Quad. The group includes the U.S., India, Australia and Japan and has petitioned other regional partners, including South Korea, to join its efforts to counter Chinese aggression. But adviser Moon Chung-in says South Korea should refuse. “If the United States forces us to join some kind of a military alliance against China,” he said, “then I see that will pose a very existential dilemma to us” because “China will treat us as an enemy.”

Clearly, more and more South Korean leaders are weary of their nation’s reliance on America, and some are increasingly concerned about pleasing China.

Since these developments follow U.S. President Donald Trump’s increased pressure on South Korea to pay more for American’s military presence in the country and allegations that he has insulted the South Korean people, strains in the alliance are understandable. But the prospect of a break in this union is worrying in light of all that is at stake for the region—and the world.

For seven decades, the U.S.-South Korea alliance has stood as a pillar in America’s strategy to stabilize Asia. A complete break would see American troops stationed in South Korea ousted, and would bring an end to the Terminal High Altitude Area Defense system that America operates in the nation. These developments would move a significant amount of political and military influence away from the U.S. and toward Asia’s regional behemoths. They would give China and Russia a freer hand to assert their will in East Asia and beyond.

The Trumpet has long predicted that such a power shift will take place. “The scenario of an America-free Asia will not remain hypothetical for much longer,” we wrote in our January 2014 issue. “We can already see tectonic geopolitical shifts that are rapidly turning it into a reality.”

For decades, the Trumpet and its forerunner, the Plain Truth, have forecast this development. Now a growing number of trends—such as the weakening of the U.S.-South Korea alliance—indicate how rapidly it could happen.

In the 1930s, Herbert W. Armstrong began forecasting that U.S. power and influence would eventually disintegrate. Following America’s failed attempt to invade Cuba in 1961, he put the blame not on the U.S. military or the Kennedy administration, but on the American people: “Unless or until the United States as a whole repents and returns to what has become a hollow slogan on its dollars: ‘In God we trust,’ the United States of America has won its last war! [T]he God America has deserted gave it its most humiliating defeat! What does the Cuban debacle mean? It means, Mr. and Mrs. United States, that the handwriting is on your wall!” (Plain Truth, October 1961).

Mr. Armstrong based this forecast on his understanding of Bible prophecy. The Scriptures make specific forecasts about the descendants of ancient Israel, which includes the Americans. (This can be proved by reading Mr. Armstrong’s free book The United States and Britain in Prophecy.) In Leviticus 26:19, God warned the people of Israel that if they rejected His law, He would “break the pride” of their power.

Since Mr. Armstrong’s death in 1986, Americans have increasingly rejected God and His law. Meanwhile, the U.S. has entered into numerous military conflicts, each one draining a little more of the nation’s pride in its power.

The situation on the Korean Peninsula today shows that more and more people around the world are coming to see that America’s pride in its power is broken. South Korea and other countries are preparing for a future in which they no longer rely on America.

Meanwhile, Revelation 16:12 discusses a group of nations called “the kings of the east” that will rise to power in the end time, just as the U.S. is weakening. Revelation 16, Ezekiel 38 and other Bible passages show that this bloc will play a major role in the final global war. Ezekiel 38 shows that this bloc will be comprised of Asian nations led by Russia and, to a lesser degree, China.

Revelation 9:16 shows that the combined militaries of all these Asian “kings” will amount to 200 million soldiers—a military far larger than any in mankind’s history. Ezekiel 38:6 lists as part of this Asian alliance some ancient names for the modern people of Korea. This shows that the Koreas will eventually lend their military power to the vast bloc led by Russia and China.

To understand where these trends are heading and the remarkable hope that is connected to them, order your free copy of our booklet Russia and China in Prophecy.