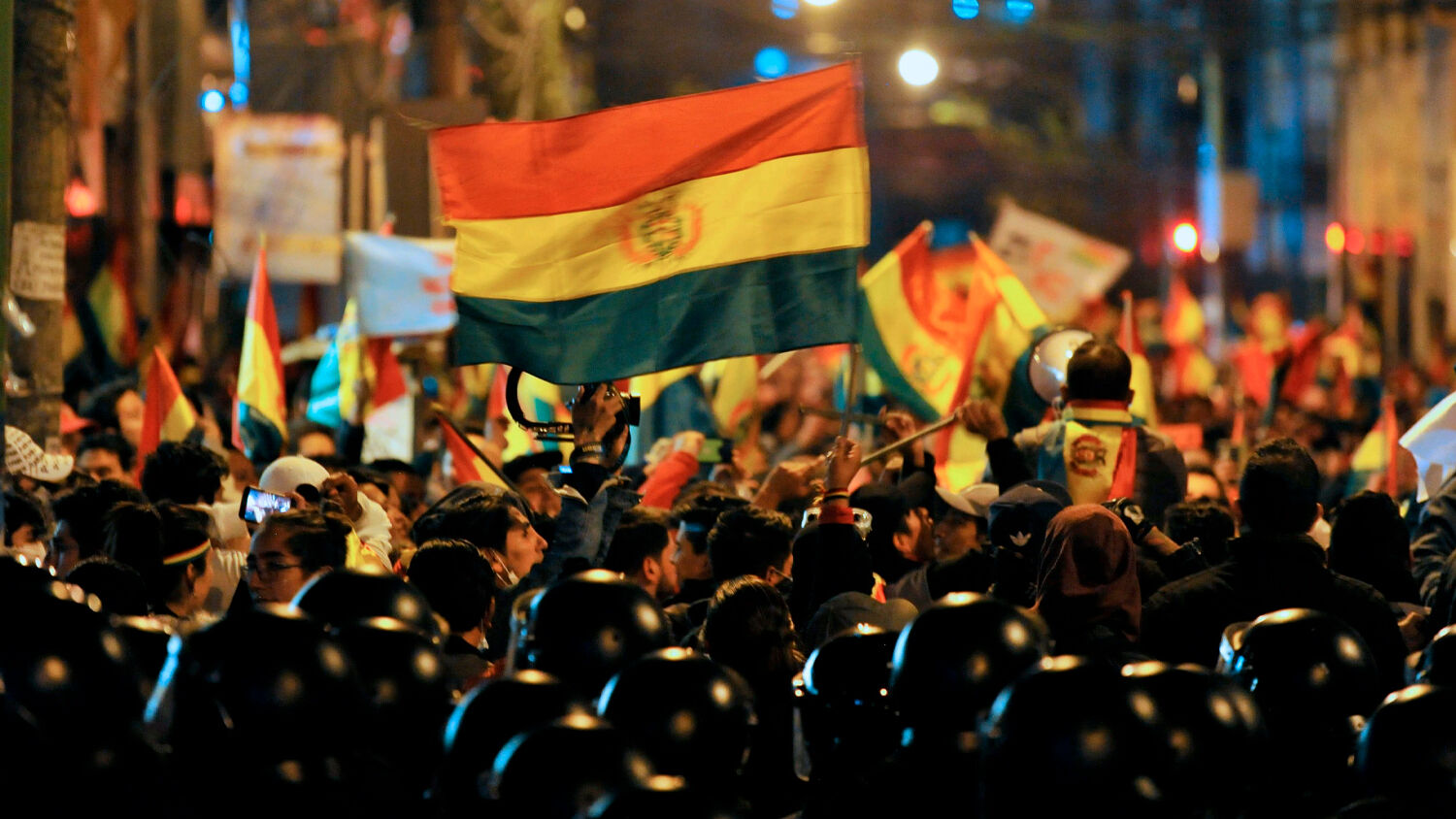 Supporters of the Comunidad Ciudadana opposition party clash with police as they try to reach the Electoral Supreme Tribunal in La Paz, on Oct. 24, 2019, after learning the election results.
JORGE BERNAL/AFP/Getty Images

Eleven months of centrist rule are cut short by a landslide victory for the nation’s socialist party.

Socialism is back in Bolivia after the Movement Toward Socialism (mas) party won a landslide victory in elections held on October 18. Last year, former socialist president Evo Morales was accused of rigging the election in an attempt to claim an unprecedented fourth term in power. He was ultimately pushed out and exiled from the country, and a centrist interim government came to power.

But after 11 months of an interim government, in which Bolivia campaigned against Cuba and Venezuela while strengthening diplomatic ties with Israel and the United States, the people have overwhelmingly voted for a return to socialism.

In November last year, thousands of Bolivians flooded the streets, protesting Morales’s attempt to extend his 14 years of presidency. After Morales fled to Mexico City as a result of the protests, Gabriela Poehlmann, president of opposition group United in Action, said, “I felt relief. I felt hope. I felt freedom.”

“If mas came back … it would be terrible for the country,” she added. “As the saying goes: People get the governors they deserve.”

Today, many people are embracing the return of mas despite the fact that just last year they cheered the ousting of the party’s leader. But the election of Morales’s former finance minister, Luis Arce, to the presidency has seen a return to form. Because, despite thousands protesting Morales’s presidency, many Bolivians viewed him fondly and believed him to be the victim of a coup and framing.

Under Morales, the economy and the country enjoyed a period of prosperity uncommon for socialist nations. Bolivia’s example therefore poses the question: Does socialism actually work?

The horrors of life in a socialist government are well documented in neighboring Venezuela, where extreme poverty and starvation have led many to start eating their pets. And yet Bolivia has long been hailed as a socialist success story. It’s economy has boomed and grown over the last decade as poverty, unemployment and illiteracy all dropped, primarily because of newly elected Arce’s stint as finance minister.

This is why Morales, and consequently socialism, is rather popular in Bolivia. Many in the West often hold up Bolivia as the example of the potential socialism has.

But reality must be considered.

Bolivia is rich in natural gas, which accounts for 45 percent of its exports. However, Venezuela is actually richer than Bolivia. The more significant difference is that Bolivia has been far more open to free-market capitalist policies than its unrepentantly socialist neighbors.

Rather than control and own local industries, companies and means of production, the Bolivian government merely shares the profits. While this by no means equates to free-market capitalism, it is much more conducive to a healthy economy, unlike Venezuela and Cuba, which wholeheartedly embrace socialism.

Bolivia has also been much more fiscally responsible than its neighbors. It has managed its natural gas and mineral resources more carefully than Venezuela or Cuba, creating budget surpluses that were then used to reduce public sector debt and build up reserves.

This socialism-lite approach freed Morales to enact policies of generous distribution of wealth to women, the disabled and other at-risk groups, which is highly popular with the majority in Bolivia.

As Brittany Hunter wrote for the Foundation for Economic Education, “Bolivia is no standard of socialist success. Indeed, any prosperity enjoyed by the country is simply because degrees of free-market capitalism have survived in spite of socialism, which in Bolivia, is more rhetorical than real.”

Is the Honeymoon Period Almost Over?

However, even in the limited degree that socialism has existed in Bolivia, it is no great model of success. Government corruption is endemic in the public sector. Infrastructure tenders are offered to pals of government officials rather than the most competent and qualified company.

Additionally, the government is hostile to the foreign companies operating mines and gas fields inside the nation. This leads to minimal investment and maximum exploitation of resources by foreign companies before they leave.

And since 2015, the government has been running large deficits that, if social welfare programs and handouts remain on the same trajectory, could soon see Bolivia in similar conditions to Venezuela. While these welfare programs have seen the number of chronically malnourished Bolivians drop from 32 percent in 2003 to 18 percent in 2012, the reality is that the nation still has 2 million starving people.

If Bolivia continues on the same path, this number is likely to steadily increase to higher levels than before.

Despite all this, many are still optimistic about the country’s direction. Morales’s ouster was a fight against the authoritarian tendencies of holding on to power for an inordinate amount of time. Many are happy to take what comes as long as some semblance of democracy remains in the country.

But the reality is that authoritarianism is inherent in socialism. What is to stop Arce from trying to succeed where Morales failed? History shows that he could be successful. Because while many protested against Morales, many would have been happy to see him stay in power.

It is a sad reality to see excitement and joy over a government that still has nearly 20 percent of its population in poverty. Celebrating progress is understandable, and going on the right track is definitely something to be proud of. But Bolivia’s progress is stalling and shows that socialism doesn’t work.

The governments all over this world, to one degree or another, have become satisfied with imperfection. Even the best form of government that this world has tried, one allowing free-market capitalism in its true form, still falls far short of perfection. And those who seek perfection chase after socialism, which history has proved time and again to be incapable of solving man’s problems, and instead doubles them.

Governments the world over are simply failing to deal with the mounting problems. Trumpet editor in chief Gerald Flurry wrote in the November-December 2020 issue:

It is becoming clearer than ever that the leaders and governments of this world do not have real answers to the problems we face! In many countries, dissatisfaction and anger with government are spreading faster than coronavirus. …

Protest movements are shaking Lebanon, Belarus, Bulgaria, Spain and elsewhere. Authoritarian China has silenced dissenters in Hong Kong and Taiwan. Strongmen in Russia, Turkey, Egypt, India, Malaysia, Pakistan and other nations have many people disturbed about their countries’ future. In so many cases, not only are our leaders not solving our crises, they are creating more crises!

Voters in Bolivia, vacillating between governments, marching against socialism last year only to welcome it back 11 months later are looking to all kinds of leaders to solve their problems. But no such man-made solution exists. The only solution is coming very soon; it is a government that, as Mr. Flurry wrote, “will actually solve all these problems.”

“It is the establishment of a new world government,” he wrote, “an entirely different type than any of the governments that are struggling with these escalating disasters on Earth today.” Please request a free subscription to our newsmagazine, the Philadelphia Trumpet, and read the latest cover article, “A New Government Is Coming!” That coming government is the only hope we have.