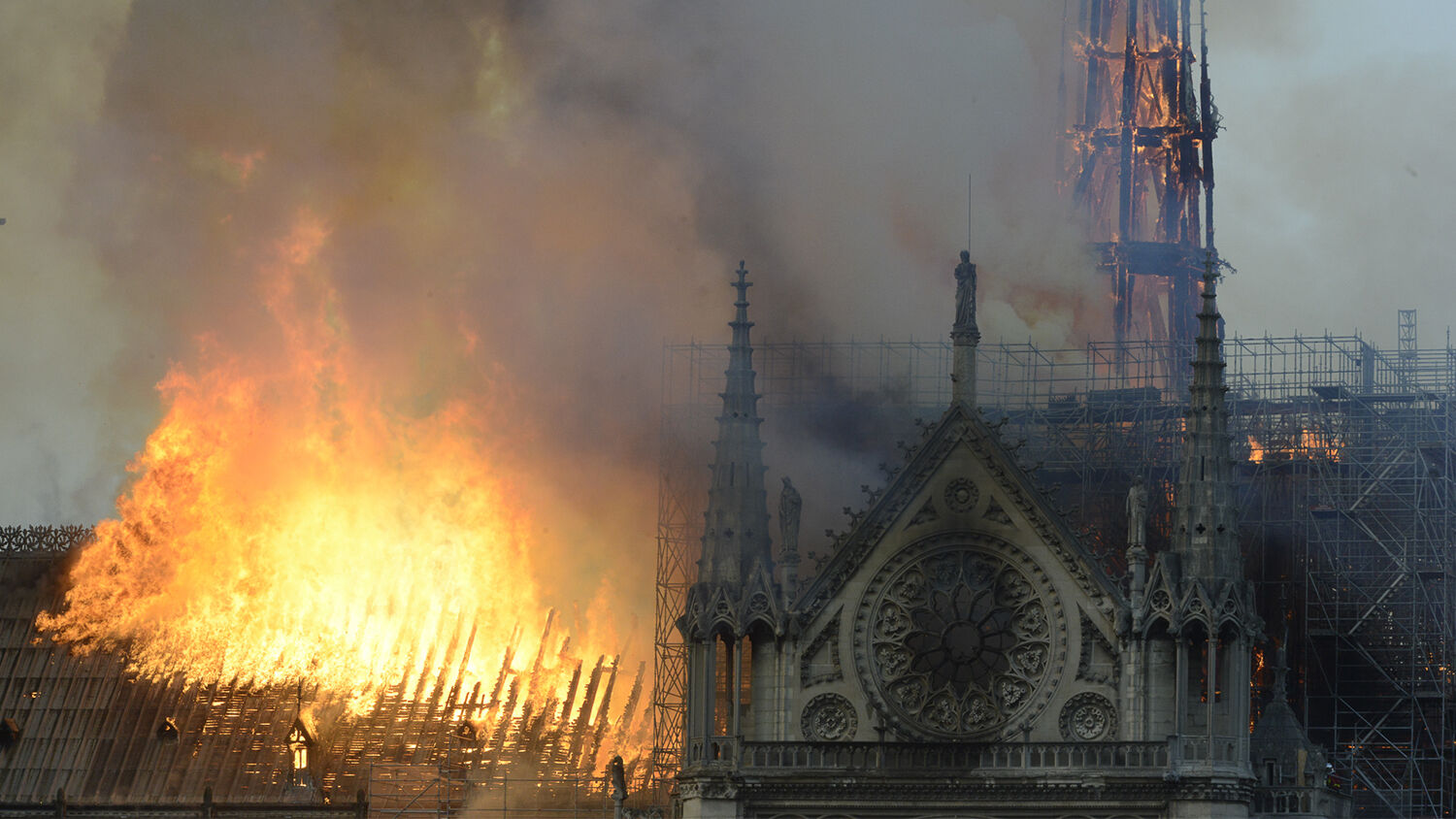 The burning of Notre Dame last night captured the imagination of the world. “Notre Dame is our history, our literature, our imagination,” lamented French President Emmanuel Macron. “The place of all our great events, our epidemics, our wars, our liberations, the epicenter of our lives.”

The cathedral is literally at the center of Paris—distances to the city are measured from a plaque just outside its front doors. No wonder the nation is mourning.

The fiery destruction of the cathedral’s roof and spire was an emotional event even for many outside France.

“Notre Dame is a symbol of France and of our European culture,” said a spokesman for German Chancellor Angela Merkel. “Our thoughts are with our French friends.”

Prince Charles said he was “heartbroken” to learn of the fire, and said that the Cathedral “represents one of the greatest architectural achievements of Western civilization.”

Melissa Mackenzie, publisher of the American Spectator, wrote, “The images from the burning of Notre Dame provoke the same sort of heart-heavy dread as the 9/11 images. … It feels like we’re witnessing the end of Christianity and Western civilization. Notre Dame is irreplaceable. No tower can be built in its stead. There will only be a time before and after Notre Dame.”

Notre Dame Cathedral, the fire, and the massive reaction to it are powerful reminders that the Catholic Church is at the heart of Western civilization.

Notre Dame Cathedral is nearly 1,000 years old. Construction began in 1163 and continued for two centuries. It took a huge investment of labor, with 1,000 craftsman working on it. Thirteen thousand oak trees went into the roof’s supporting beams—the fuel for yesterday’s massive fire.

That was where civilization of that time poured its choicest resources. Today we have our moon shots, our Olympic games and our commercial ventures. Back then, it was religious buildings.

Notre Dame had the highest ceiling of any cathedral ever built at the time; it required innovative building techniques. Cluny, a French monastery, was the largest enclosed space in Western Europe. Europe’s ornate palaces would not be built for several more centuries. At that stage during the Middle Ages, religious buildings were groundbreaking projects.

Also at that formative stage of civilization, the Catholic Church dominated.

I don’t entirely agree. The English-speaking world has made a huge contribution—and we’ve always been at least arms-length from the Catholic Church. But the Catholic Church “had a decisive and far-reaching influence on Western religion, politics, culture, science and education, often in ways most people fail to recognize,” as it says in our book The Holy Roman Empire in Prophecy. The book continues:

The Vatican has presided over the rise and fall of kings and governments, the emergence of political and ideological movements, and the discovery and colonization of new lands and peoples. The Catholic religion has influenced every facet of Western society, from art and music to science to the measurement of time to the annual holidays we celebrate. Its influence over Europe is even more extensive: It has shaped Europe’s legal systems, its educational institutions, many of its most prominent cities, its economies and even agriculture.

That is reflected in the fact that the greatest, most expensive, most time-consuming achievements of civilization of that time were dedicated to the Catholic Church.

Notre Dame’s fire is a powerful reminder of Europe’s Christian roots—and it’s on the front page of just about every newspaper in the world.

It’s also a powerful symbol of that civilization under siege.

The fire at Notre Dame appears to have been started by an accident during renovations. But that wasn’t the case at Paris’s Saint-Sulpice Church. The 17th-century building, the capital’s second-largest church, held important artwork. Police have said that the March 17 fire there was not an accident.

Nor was this the only church attacked. Saint-Alain Cathedral saw its statues and crosses smashed. “God will forgive,” said the city’s mayor. “Not me.” On April 2, the Washington Post noted the trend, writing:

Sometimes it’s a cross of human excrement smeared on a church wall, with stolen Communion hosts stuck at the four corners. Other times, a statue of the Virgin Mary lies shattered on the floor.

Now and then, a fire breaks out in a house of prayer.

Roman Catholic churches have increasingly come under attack in France, a country so long identified with Christianity that it used to be called “the eldest daughter of the church.”

French members of Parliament Annie Genevard and Philippe Gosselin have called for a parliamentary inquiry into anti-Christian acts.

But perhaps that’s merely a small example of the way Christianity of all stripes is under attack in Europe.

An increasingly secure culture looks down on and excludes those with more traditional morals. And the rise of Islamic fundamentalism, and the mass arrival of Muslim migrants, is prompting fears of survival for Europe’s Christian civilization.

But the outpouring of grief over Notre Dame shows the fight is not over yet. Catholicism still holds deep meaning for many.

The images from yesterday evening - of people quietly praying or singing in front of burning Notre Dame for hours - were truly unexpected. There seems to be a religious heart beating under the skin of a very secular capital like Paris.

The Catholic Church’s deep roots in Western civilization go back centuries. Which is why, even in this secular age, its monuments still hold great meaning.

And there are some ready to fight back. Cardinal Robert Sarah, prefect of the Congregation for Divine Worship, said in a recent interview that the modern lgbtq agenda is “the revolt of Satan.” He also warned that Europe will be “invaded by foreigners, just as Rome has been invaded by barbarians.”

“If Europe disappears, and with it the priceless values of the Old Continent, Islam will invade the world and we will completely change culture, anthropology and moral vision,” he said.

The solution? Europe must “rediscover its Christian roots and identity. A West that denies its faith, its history, its roots and its identity is destined for contempt, for death and disappearance.”

And Notre Dame reminds us what those roots are.

The Catholic Herald made a similar point, writing, “Only by returning to the faith can we truly rebuild Notre Dame.”

But what are those roots really? The lofty spires and ceiling of Notre Dame Cathedral tell only half the story. Faced with the threat of radical Islam, and with a society seemingly going mad with the transgender agenda, it would be easy to cheer a Europe returning to the roots that gave us Notre Dame Cathedral.

But there is a dark side to those roots.

From 1209 to 1229, while Notre Dame was being built, France and the Catholic Church embarked on another joint project. This time it wasn’t a splendid new cathedral to mark Paris as the capital of France. Instead, it was to stamp out any Christians they disagreed with. The two joined forces for the Albigensian Crusade in the south of France. Knights who fought for the pope were given a free pass through purgatory. They showed no mercy, and they killed at least 200,000 people.

This was not a one-off—it happened routinely during the time that Europe was in touch with these Christian roots.

Europe’s history is full of such contradictions. The Habsburg emperors helped kill huge numbers of non-Catholics. “They did their killing while supporting artists like Mozart, Bach and Schubert,” writes Trumpet editor in chief Gerald Flurry in Daniel Unlocks Revelation. “They were very sophisticated as they slaughtered people.”

This history sounds a powerful warning about Europe returning to these roots. The Bible gives the same warning. It forecasts Europe’s close relationship with the Catholic Church in detail.

I wrote “European Unity? Be Careful What You Wish For” in the latest issue of the Trumpet magazine to give a complete account of this history. Expect to see more people calling for Europe to return to its roots. Bible prophecy says it will happen.

You need to understand what those roots are.