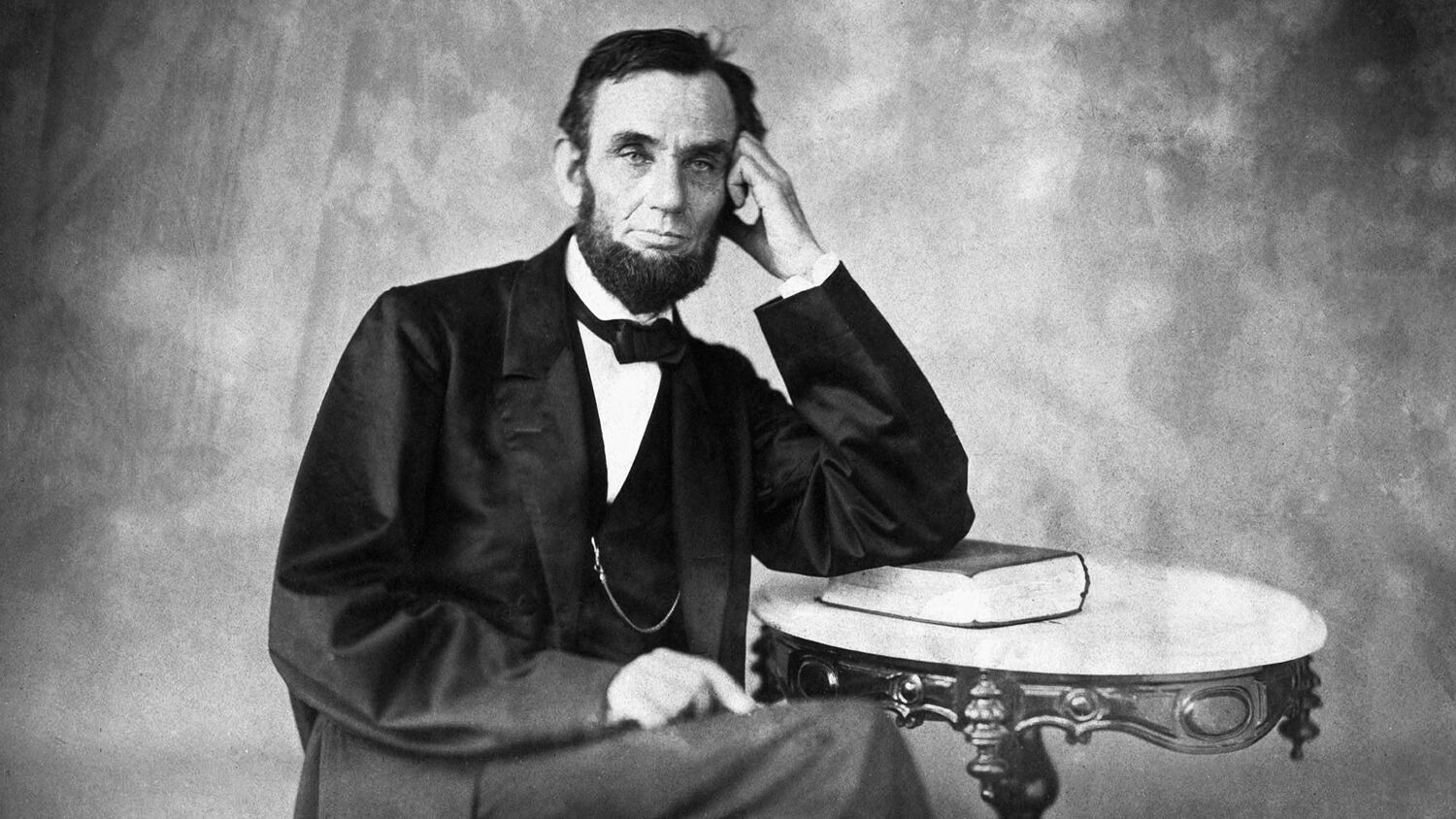 Like Herbert W. Armstrong, my father has focused on Abraham Lincoln again and again. He said he was “like a prophet of God” to America! Like the prophets he read about, Lincoln believed in God and studied His Word. Like the prophets, he had a message. And as in the days of the prophets, our people could survive and even avoid what is coming if they would listen. My father said in his Key of David program “How Lincoln Won the Civil War,” “If we were to actually follow the example of Lincoln and many Americans during the Civil War, we could avoid that bloody civil war. We could avoid it altogether.”

Abraham Lincoln became president in 1860. A war that killed more Americans than all others combined broke out a month later. The war—and his life—ended four years later. He had a narrow window and a slender chance to make his mark. In those four years, his education, his ambition and his connection to God changed history.

What made Lincoln who he was? What did he learn from the family Bible, from Blackstone, from Euclid, from the authors he read and compared to the Holy Bible, which he called “the best gift God has given to man”? What were his principles?

You get a marvelous insight into them in his famous address to the Young Men’s Lyceum in Springfield, Illinois. It was 1838, and he was just 28 years old.

And America was in the middle of mob violence! The issue was race. Abolitionist zealots and pro-slavery gangs were clashing, and regular citizens and even family members were growing more and more divided, breaking laws, committing violence, and killing people.

Here’s what the 28-year-old newcomer to the city whose education was largely the Bible had to say in his speech, which was titled “The Perpetuation of Our Political Institutions”:

We find ourselves in the peaceful possession of the fairest portion of the Earth, as regards extent of territory, fertility of soil and salubrity of climate. We find ourselves under the government of a system of political institutions, conducing more essentially to the ends of civil and religious liberty, than any of which the history of former times tells us. … At what point shall we expect the approach of danger?

Lincoln stated this so plainly, yet a lot of people, then and now, did not have this perspective or forgot it. But he saw God in history. He had read the Bible—not just what preachers said about the Bible, but the Bible itself. He had read Genesis. My father said recently that he must have understood to some degree the connection between Americans having “the fairest portion of the Earth” and scriptures like Genesis 35:11-12, where God said: “[B]e fruitful and multiply; a nation and a company of nations shall be of thee, and kings shall come out of thy loins. And the land which I gave Abraham and Isaac, to thee I will give it, and to thy seed after thee will I give the land.”

In this Lyceum speech, after acknowledging that America had so many natural and governmental blessings that it was ultimately impervious to foreign attack, he said, “At what point then is the approach of danger to be expected? I answer, if it ever reach us, it must spring up amongst us. It cannot come from abroad. If destruction be our lot, we must ourselves be its author and finisher. As a nation of freemen, we must live through all time, or die by suicide.

“I hope I am over wary; but if I am not, there is, even now, something of ill-omen, amongst us. I mean the increasing disregard for law which pervades the country ….”

To this young men’s civic organization, Lincoln warned that people on both sides of the issues across “the whole country” had attitudes of lawlessness. He recounted one report of violence after another after another, he connected these current events to a biblical perspective, and he warned that lawlessness was risking national suicide!

How far beyond his years! This reaches all the way to us today! How could a young man have such wisdom? It came from his biblical education!

Such are the effects of mob law; and such as the scenes, becoming more and more frequent in this land so lately famed for love of law and order. … Whenever the vicious portion of population shall be permitted to gather in bands of hundreds and thousands, and burn churches, ravage and rob provision-stores, throw printing presses into rivers, shoot editors, and hang and burn obnoxious persons at pleasure, and with impunity; depend on it, this government cannot last.

Lincoln warned that even “good men, men who love tranquility, who desire to abide by the laws,” who see lawless people go unpunished and unrestrained by the government, will not be willing or able to perpetuate the law, the government and the nation.

Lincoln, 28-year-old Lincoln, insisted on the rule of law. He knew there were bad laws. He desired for laws protecting slavery to disappear, for example. But he absolutely insisted that those bad laws be changed lawfully, according to the state and national constitutions. If people tried to change reality by using violence instead of using law, nothing less than the “perpetuation of our political institutions” (the existence of government itself) was at stake! He warned that uncontrolled passion would “be our enemy.” He was standing up for law—and against anarchy!

This powerful message comes from just one of Abraham Lincoln’s speeches. What a tremendous understanding he had of justice and lawfulness. And what a gift he had for understanding the heart of the matter and causing people to understand it as well. Imagine these same words from this same speech being given to a young men’s educational organization today, 180 years later. These words are timeless, much like the Bible. Imagine these words being followed.

What a mind and heart and message this man had. That had to come from somewhere!

“Let every man remember that to violate the law is to trample on the blood of his father, and to tear the character of his own, and his children’s liberty,” Lincoln said. “Let reverence for the laws be breathed by every American mother to the lisping babe that prattles on her lap—let it be taught in schools, in seminaries and in colleges; let it be written in primers, spelling books and in almanacs—let it be preached from the pulpit, proclaimed in legislative halls, and enforced in courts of justice. And, in short, let it become the political religion of the nation; and let the old and the young, the rich and the poor, the grave and the gay, of all sexes and tongues, and colors and conditions, sacrifice unceasingly upon its altars.

“Let those materials be molded into general intelligence, sound morality, and in particular, a reverence for the Constitution and laws: and, that we improved to the last; that we remained free to the last; that we revered his name to the last; that, during his long sleep, we permitted no hostile foot to pass over or desecrate his resting place; shall be that which to learn the last trump shall awaken our Washington” (ibid; emphasis added throughout).

Yes, that is 28-year-old Abe Lincoln exhorting young people and Americans everywhere to cherish the rule of law, to obey the law, and to keep biblically sound morality in their lives, their children’s lives and generations to come until the biblical doctrine of the resurrection comes to pass!

“Upon these let the proud fabric of freedom rest, as the rock of its basis; and as truly as has been said of the only greater institution, ‘the gates of hell shall not prevail against it’” (ibid).

These were not the fleeting ideas of a young man who would later let some college professor tell him God was a myth and socialism was our only hope. As he aged, he developed these same thoughts much further at a much more consequential time in much more crucial war-time comments, letters, speeches and proclamations. Maybe the best example of the Bible’s effect on Lincoln, his presidency and the whole nation on into future generations was his last major speech, the second inaugural, one of the most explicitly religious presidential speeches of all time!

We are entering a time of division and carnage like the one Abraham Lincoln faced. Turn to the words of one of America’s greatest presidents. Turn to the words that he himself turned to. Repent from forgetting God; admit our need—your need—for reverence for the laws, especially the perfect law of God. Admit that you have been wrong and are wrong. Admit that only God can save us! Fulfill your duty as an American and as a human being, as Abraham Lincoln instructed us to:

[I]t is the duty of all nations, as well as of men, to own their dependence upon the overruling power of God, to confess their sins and transgressions, in humble sorrow, yet with assured hope that genuine repentance will lead to mercy and pardon; and to recognize the sublime truth, announced in the Holy Scriptures and proven by all history, that those nations only are blessed whose God is the Lord.