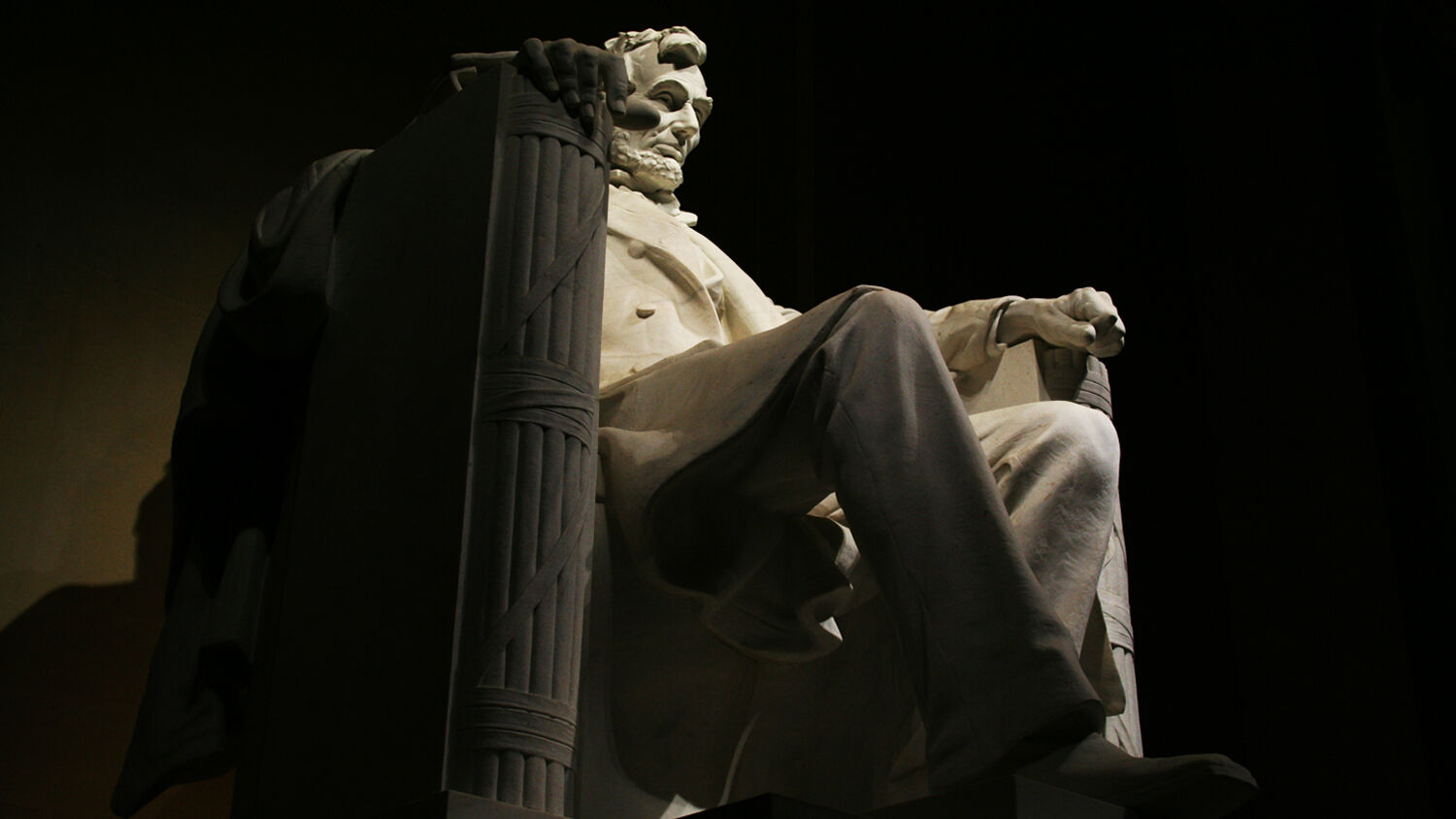 Educator Herbert W. Armstrong wrote in the December 1965 issue of the Plain Truth, “The future welfare and even the existence of civilization is dependent on the educational system.”

And what has been the foundation of the American educational system? “Little or nothing is taught about God, but even in the elementary grades the basic concept—the approach to knowledge—is evolution,” he wrote in Mystery of the Ages.

This is the education that has produced people who are passively, actively or barbarically dividing this nation. What was the education of the man who held it together?

The basic concept, the approach to knowledge, was God!

Young Abraham Lincoln, like others of his time, knew the obvious truth that there is a Creator.

And the Creator knew about him.

Carl Sandberg wrote his Pultizer Prize-winning six-volume biography of Lincoln in the 1920s. If you compare it to the abridged version, which he wrote in 1954, you can immediately notice a difference. The unabridged version reveals a lot more about God intervening in Abraham Lincoln’s education—in his very existence!

“His father had portentous dreams; his father told how in a night’s sleep once he saw a wayside path to a strange house; he saw the inside walls, the chairs, the table, the fireplace in that house; at the fireside a woman was sitting, and her face, eyes, and lips came clear; she was paring an apple; she was the woman to be his wife. This was the dream, and in his night’s sleep it came again and again; he could not shake it off. It haunted him till he went to the path, followed the path to the house, went inside and there saw a woman, sitting at the fireside paring an apple; her face, eyes, and lips were those he had seen so often in his night sleep; and the rest of the dream came to pass.”

It sure seems like God wanted these two to marry and have young Abraham! And learning about this, when he was old enough, had an effect on young Abe. He searched his dreams for meaning.

This is from pages 65-85 in Volume 1 of the unabridged biography. But this account of supernatural involvement in the birth of one of the greatest Americans was basically deleted from the abridgment!

Lincoln’s mother, Nancy, died when he was 9, the same year that he was kicked by a horse so badly that at first he was presumed to have been killed. But he recovered, and his father remarried. And do you think that remarriage could have also been guided by God? His stepmother read to him often—from the Holy Bible. It was how he and many other children at that time learned to read and write. This was the textbook of the “educational system” for him. Young Abe loved reading the Bible and any other books he could get his hands on, another fact that is deleted from the abridgment.

The unabridged biography notes that he read the Bible, studied the Bible, read writings about the Bible.

“And yet Lincoln read the Bible closely, knew it from cover to cover, was familiar with its stories and its poetry, quoted from it in his talks to juries, in political campaigns, in his speeches, and in his letters. There were evangelical Christian church members who felt he was a solemn, earnest, religious man” (ibid).

Page 416 relates that he wrote a touching letter to his half-brother, who was at their father’s bedside. He was dying, and Lincoln told his brother to tell Dad to put his trust in his Maker. When death was close by, “Lincoln often used Bible language” (ibid).

One woman on her deathbed asked Lincoln to read her a few Bible verses. Before someone could bring him a Bible, Lincoln started quoting Psalm 23 from memory: “Yea, though I walk through the valley of the shadow of death, I will fear no evil: for thou art with me; thy rod and thy staff they comfort me.”

Some point out that Lincoln did not attend church regularly. That is true, but it did not have to do with ignorance or disagreement with the Bible. It had to do with his familiarity with the Bible! Regarding church attendance, he said he “couldn’t quite see it.” He said of churchgoers in various denominations: “They all claim to be Christians, and interpret their several creeds as infallible ones. I doubt the possibility, or propriety, of settling the religion of Jesus Christ in the models of man-made creeds and dogmas.”

He rightly saw “debatable wrangles” that “divide denominations”; he did not see a church that taught and lived what he saw in the Bible, and so he did not attend. He once told a friend, “If the church would ask simply for assent to the Savior’s statement of the substance of the law: ‘Thou shalt love the Lord thy God with all thy heart, and with all thy soul, and with all they mind, and thy neighbor as thyself’—that church would I gladly unite with.”

Don’t think Abraham Lincoln was not educated by the Bible. He based his life and his leadership on what he read in the Bible. Not what preachers told him was in the Bible, but what he actually read there.

That education continued long past school age. Maybe the best example of its effect on Lincoln, his presidency, and the whole nation on into future generations was his last major speech, his second inaugural—one of the most explicitly religious speeches ever given by a president!

Trumpet editor in chief Gerald Flurry has focused on Abraham Lincoln again and again. As he has said, Lincoln was “like a prophet of God”!

And as in the days of the prophets Lincoln read about in the Bible, our people could survive and even avoid what is coming if they heeded the prophets’ message. “If we were to actually follow the example of Lincoln and many Americans during the Civil War, we could avoid that bloody civil war,” my father said in his June 19 Key of David program (“How Lincoln Won the Civil War”). “We could avoid it altogether.”

How could one man do what Abraham Lincoln did? After the nation became more and more divided over years and generations, one man—and those he led—welded it back together! How was that possible?

America survived the Civil War because of President Abraham Lincoln and the Holy Bible.

In the mid-1800s, many Americans still believed the Bible and still tried to obey the Bible. They disagreed over what it meant, and they followed it to differing degrees, but they let it guide them. And they responded to a president who believed it.

Later in life, upon receiving a Bible as a gift, he stated, “In regard to this Great Book, I have but to say, it is the best gift God has given to man. All the good the Savior gave to the world was communicated through this book. But for it, we could not know right from wrong. All things most desirable for man’s welfare, here and hereafter, are to be found portrayed in it.”

Abraham Lincoln grew up on the American prairie frontier in a one-room shack, received almost no formal education, and eventually found himself running, unsuccessfully, a store and tavern in New Salem, Illinois. He still had his voracious appetite for reading, his reverence for the Bible, an interest in law and real ambition, but he was a broke clerk in a town of about 300 people. And if this 23-year-old, heavily indebted shopkeeper had not experienced something exceptional, he would have perhaps remained an unexceptional man that history never heard of.

But one day, a farmer driving a wagon stopped at the store. He was heading back East and was trying to get rid of some of his belongings, including a large barrel. Lincoln at first declined, but then “to oblige him, I bought it, and paid a half-dollar for it.” He put the barrel in a corner. Months later, he needed to store something, and he dumped out the barrel. Out fell a bunch of junk—and a copy of William Blackstone’s Commentaries on the Laws of England.

As some have pointed out, if that book had not been in the barrel, Lincoln would not have taught himself law at that point, and possibly never. And he would never have become an excellent lawyer. He would never have entered politics. He would never have given speeches like his Lyceum Address. He would have never debated Stephen Douglas, never met the chairman of the Illinois Republican Party, never become the party’s nominee, and never become president of the United States of America on the verge of the Civil War. (Yet this history too was changed in the abridged biography.)

Not so with Abraham Lincoln. In more ways than one, the Word of God was his education. He did not understand or obey much of the spiritual aspects of the Bible. (He was not called by God to receive His Holy Spirit and understand spiritual knowledge.) But he thought about and cared and loved knowledge and truth and hope for building a better world through laws and governments that understand who and what a human being truly is. And that craving was more than satisfied when he opened the pages of his Bible.

Write God back into history, and it will amaze you.

Next week I want to write to you about Lincoln’s address to the Young Men’s Lyceum. I’ll be in Rapid City, South Dakota, so Mount Rushmore and the towering greatness of Lincoln will be on my mind still. I’d love to hear your thoughts on Lincoln, especially the young Lincoln. Write me at sflurry@thetrumpet.com.

Visit our book club page on Sandburg’s Abraham Lincoln: The Prairie Years and the War Years.