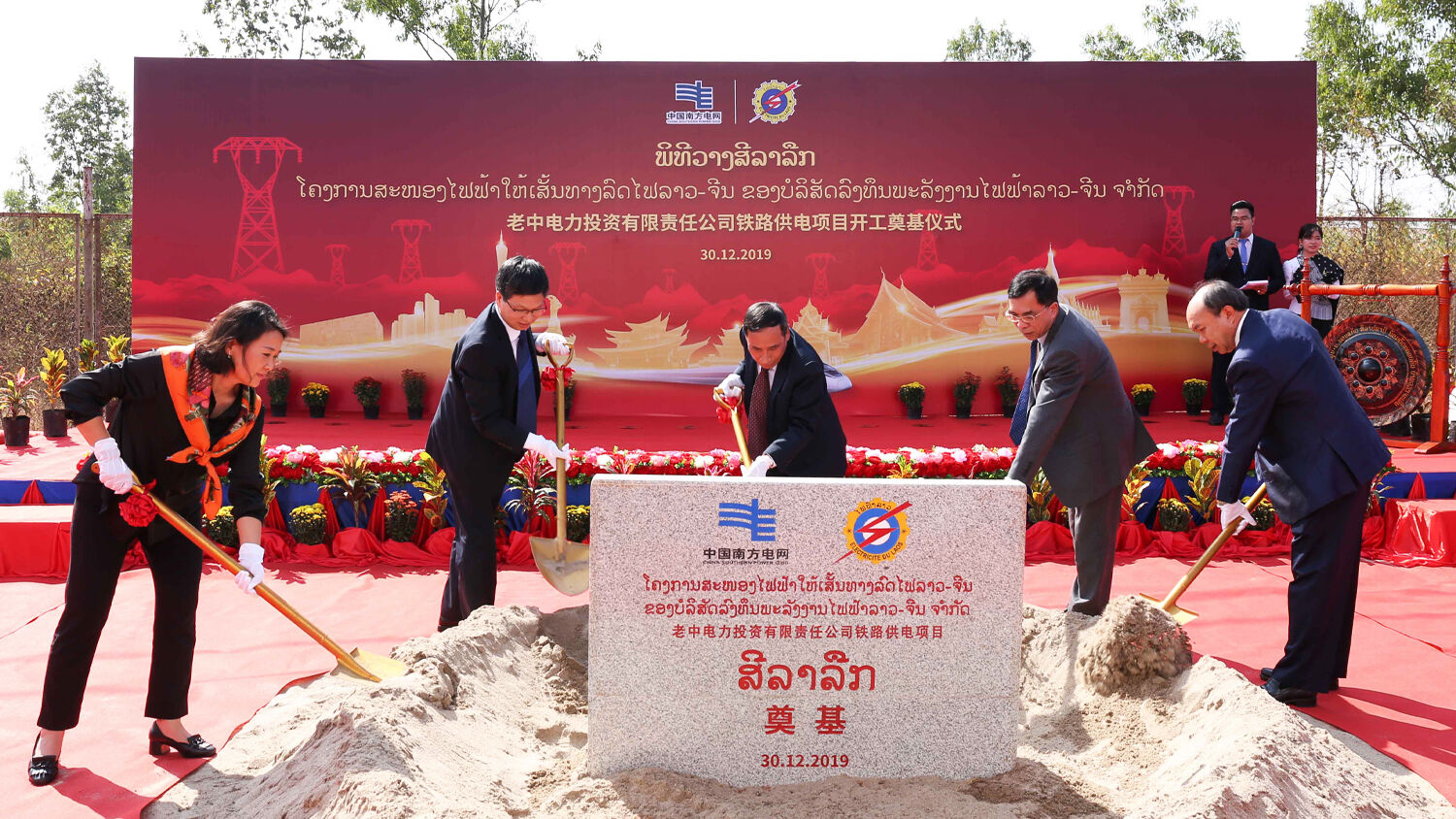 Representatives from China and Laos attend a groundbreaking ceremony for the power supply project for the China-Laos Railway on Dec. 30, 2019.
Xinhua/Zhang Jianhua/Getty Images

A new agreement ‘puts Laos fast on the track of becoming a pseudo-province of China.’

Laos has become the latest country to fall into China’s dangerous debt-trap, Reuters reported on September 4, noting that the nation has been forced to cede majority control of its electrical grid to its giant neighbor to the north.

The seed of Laos’s financial problems was planted during a landmark speech delivered in 2013 by Chinese leader Xi Jinping. “[W]e should take an innovative approach and jointly build an economic belt along the Silk Road,” Xi said. “This will be a great undertaking, benefiting the people of all countries along the route. To turn this into a reality, we may start with work in individual areas and link them up over time to cover the whole region.”

The project came to be known as the Belt and Road Initiative. By building roads, railways, ports and other infrastructure in nations throughout Asia, the Middle East, Africa and Europe, it would make the world more dependent on China.

The nation of Laos—with its landlocked territory and population of only 7 million—eagerly signed up. The Laotians were anxious for China to loan them hundreds of millions of dollars to build the country up and better connect it to the rest of the world.

In 2016, China began building a 260-mile-long high-speed railway linking Laos’s capital, Vientiane, to the border with China. Upon completion next December, the railway will connect the nation to China’s vast rail system. But due to Laos’s mountainous terrain, the line includes a staggering 123 miles of tunnels and almost 40 miles of bridges. These engineering challenges gave the project a price tag of $6.2 billion—or $24 million per mile.

Laos also let China build some major hydroelectric dam projects. Here Laos’s mountains presented more advantages than difficulties. When combined with the nation’s rivers, they made the country a prime candidate for power generation. And as it accepted China’s loans and expertise to build dozens of such projects, Laos began branding itself as “the Battery of Southeast Asia.” It would generate more power than it needed and sell the excess to neighbors.

It all looked promising for Laos—for a time.

In 2018, the Center for Global Development began warning Laos that all the loans it was taking from China for these projects were piling up, putting the nation at risk of default.

This warning came just months after Sri Lanka’s debts to China reached a breaking point. Like Laos, Sri Lanka had bought into Xi Jinping’s Belt and Road vision and had borrowed Chinese cash to build infrastructure. But Sri Lanka couldn’t repay the debts and its government had eventually determined that the only course of action was to hand China a controlling stake in the Rajapaksa Port for a period of 99 years. This transfer set off alarms in Sri Lanka and beyond because it represented a Chinese victory with potential military applications. “The acquisition provided Beijing with a deepwater port in the region in which it can dock its navy off the coast of its key regional competitor, India,” Foreign Policy wrote on Oct. 29, 2018.

But the leadership in Laos seemed unperturbed by the Center for Global Development’s warnings and the cautionary tale of Sri Lanka.

In 2019, a report by Australia’s Lowy Institute sounded the alarm once again, warning that Laos’s debts to China had reached 45 percent of gross domestic product.

Again, Laos did not heed the warning. And in August, Moody’s credit rating agency demoted Laos to junk territory, from B3 to Caa2. Moody’s also altered its outlook on the nation to negative because of “severe liquidity stress.” Then last week, Reuters broke the news that since Laos was unable to service the infrastructure loans it took out from China, the state-owned Chinese firm China Southern Power Grid Co. signed a deal taking majority control over most of Laos’s electrical grid.

For the Laotian people, this is a major loss. For China, it is a massive victory.

Beijing will now be positioned to determine who buys the electricity Laos’s rivers generate and at what price. This translates to greater influence for the Chinese over all of Southeast Asia. And in a general sense, this move takes Laos a significant step closer to being a vassal of China.

“Giving China a major stake in the ‘Battery of Southeast Asia Plan’ puts Laos fast on the track of becoming a pseudo-province of China,” Brian Eyler, director of the Stimson Center’s Southeast Asia program, told Reuters.

Eyler’s language is blunt. But it accurately describes what is happening with not just Laos and Sri Lanka but several nations that Xi has hooked with his Belt and Road Initiative (bri) infrastructure projects. Djibouti, Fiji, the Maldives, Montenegro, Pakistan, Tonga, Kanya and Zambia are all in similar positions, thanks largely to a lack of transparency in China’s bri loans. China has these countries so deep in debt that they, too, may soon have to sign parts of their nations over to what equates to Chinese control.

“China wants to avoid the impression that it is sinking its dragon claws into other countries,” said Lu Xiankun, senior research fellow at the Shanghai Center for Global Trade and Economic Governance, during a 2016 imd Discovery Event. But as bri progress continues, it is becoming clearer that for some nations, including Laos, that is essentially what is happening.

This trend is vital to watch because Bible prophecy tells us that in the “end time,” the world will enter an age called “the times of the Gentiles” (Luke 21:24).

In the February 2020 Trumpet issue, editor in chief Gerald Flurry wrote about this approaching era. “These ‘times of the Gentiles’ are yet to be fully realized” but “we are in the outer edges of this catastrophic storm,” he wrote in “The Climax of Man’s Rule Over Man.”

China’s bri and related initiatives are expanding Beijing’s power in Asia and beyond. And the debt traps with nations such as Laos make the dangers of the shift glaringly evident.

Mr. Flurry wrote that although the shift in global power now underway is deeply alarming, it is connected to good news. He continued:

This is terrifying news. Luke’s record of Christ’s prophecy says it will be a time of “[m]en’s hearts failing them for fear, and for looking after those things which are coming on the earth: for the powers of heaven shall be shaken” (Luke 21:26). …