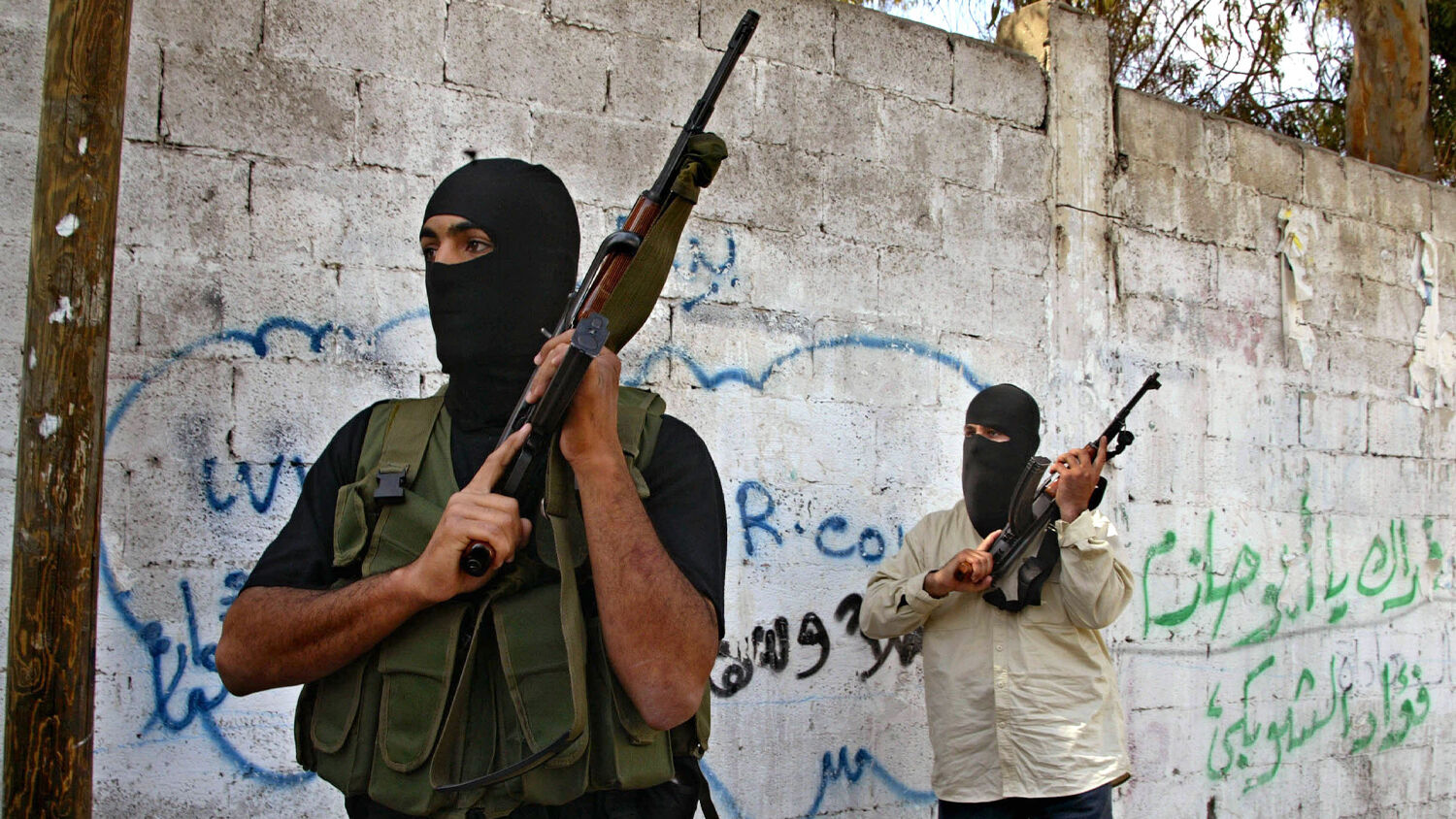 Masked Hamas fighters back up Palestinian policemen as they clash with gunmen of the former ruling Fatah faction after the gunmen stormed the Palestinian Health Ministry in 2006.
Abid Katib/Getty Images

Relations between Israel and the Gulf Arabs are warming—to the ire of the Palestinians.

Bahrain and Israel have agreed to establish diplomatic relations in another peace deal brokered by United States President Donald Trump on September 11. The agreement, reached a month after another landmark deal between Israel and the United Arab Emirates, is the latest example of Israel reaching out to the Muslim world.

These deals are huge for Israel—bringing recognition from Arab countries after decades of waiting. But they’ll also have a huge impact on Palestinians.

In previous years, many Arab states have said that the precondition for diplomatic relations was for Israel to withdraw from the West Bank and Gaza and recognize an independent state of Palestine.

Even the Arab states not involved in these new deals have been broadly supportive of them. Egyptian President Abdel Fattah al-Sisi tweeted his support of the new Bahrain deal, stating that it would bring “stability and peace in the Middle East.” Egypt is one of four Arab states to recognize Israel’s existence. The Sultanate of Oman does not; yet this didn’t stop its national broadcaster from stating that “the Sultanate welcomes the initiative taken by the sisterly kingdom of Bahrain.” Even the Arab League, an international organization of Arab states based in Cairo, doesn’t seem to be overtly hostile to the idea of its member states establishing relations with Israel. Earlier in September, a Palestinian delegation submitted a draft proposal to the League condemning the Israel-U.A.E. deal. Despite the fact that the majority of the Arab League’s member states don’t recognize Israel’s legitimacy as a country, the proposal failed to get off of the ground.

But the big prize for Israel would be Saudi Arabia. While Riyadh has made no indication at this point that it’s ready to establish diplomatic relations with Israel, a number of signs suggest that relations between Riyadh and Jerusalem are warming. Bahrain is a close ally of Saudi Arabia and many analysts state that Bahrain would have never established diplomatic relations without first consulting its Saudi friends. Marc Schneier, who has acted as an adviser to the Bahraini monarchy, stated, “The Bahrain government has been very respectful of the Saudi position throughout this process.” Saudi Arabia, the largest Arab economy, bailed out Bahrain during a financial crisis in 2018 and sent troops there to quell an uprising during the 2011 Arab Spring. Saudi Arabia also recently gave its consent for Israeli flights to use its airspace.

Some Middle Eastern nations are less positive about the agreement. Jordan and Turkey are among them; however, both already have diplomatic relations with Israel and have not indicated that they’re planning on changing that.

So, the Palestinians are left almost alone.

Without the traditional backing of the Arab states, where will the Palestinians turn to for support? One answer is each other. The Israel-Bahrain deal seems to be one of the few things that can bring the rival political factions Fatah and Hamas together. On September 12, various Palestinian factions—including Fatah and Hamas—agreed on a “unified field leadership for popular resistance” in response to the agreement. Hamas politburo member Husam Badran said that the meeting was a “major step of progress.”

For years now, Palestinian leaders have been squabbling with each other almost more than with Israel. If they form a united front, this could change very quickly. Hamas, a terrorist group based primarily in the Gaza Strip and considered one of the more violent Palestinian factions, has so far been unable to develop as strong a base in the West Bank as it would like. Fatah strongman Mahmoud Abbas, while not a friend to Israel, has been mostly successful in keeping Hamas out of Palestinian Authority politics.

Fatah and Hamas have spent years divided. Yet now they are closer than ever to unity.

But why is this so important? The Trumpet has been watching the rise of Hamas in the West Bank for years. We wrote in August 2016, “Given that the West Bank borders East Jerusalem, it is likely that the fall of half of the city is preceded by the West Bank coming under Palestinian control, especially that of the more violent Hamas faction.”

Trumpet editor in chief Gerald Flurry and managing editor Joel Hilliker wrote in the August 2008 issue of the Philadelphia Trumpet:

The Arabs of the Fatah party currently control the West Bank. However, Hamas terrorists (and weapons) are present throughout the West Bank and there is little doubt that they are working toward getting control of this strategic region of Israel. [Hamas’s sponsor] Iran’s ultimate goal is to overrun Jerusalem. The West Bank adjoins the city.

Jerusalem, throughout its millennia-old history, has always been the site of conflict. But is there any imminent danger threatening the city? An authoritative source says yes. That source is the Holy Bible. “Behold, the day of the Lord cometh, and thy spoil shall be divided in the midst of thee. For I will gather all nations against Jerusalem to battle; and the city shall be taken, and the houses rifled, and the women ravished; and half of the city shall go forth into captivity, and the residue of the people shall not be cut off from the city” (Zechariah 14:1-2).

Notice the reference to “half of the city” going “into captivity.” The Palestinians have long desired to have the eastern half of Jerusalem for themselves. They have sought support from the international community to pressure Israel to accept a “two-state solution.” But with their fellow Arabs turning against them, Palestinians might feel the need to take matters into their own hands. And Zechariah 14 implies a violent takeover.

Israel’s normalization of relations with the Arab world may have been the impetus needed for the Palestinians to finally unite and begin planning such a takeover.

Most wars between the Israelis and the Palestinians have been localized conflicts. However, the seizure of Jerusalem will unleash a domino effect of conflict that will engulf the entire world! To learn more about this, please request our free booklet Jerusalem in Prophecy.