The reason for the historic agreement between the United Arab Emirates and Israel holds a clue as to how it will end. 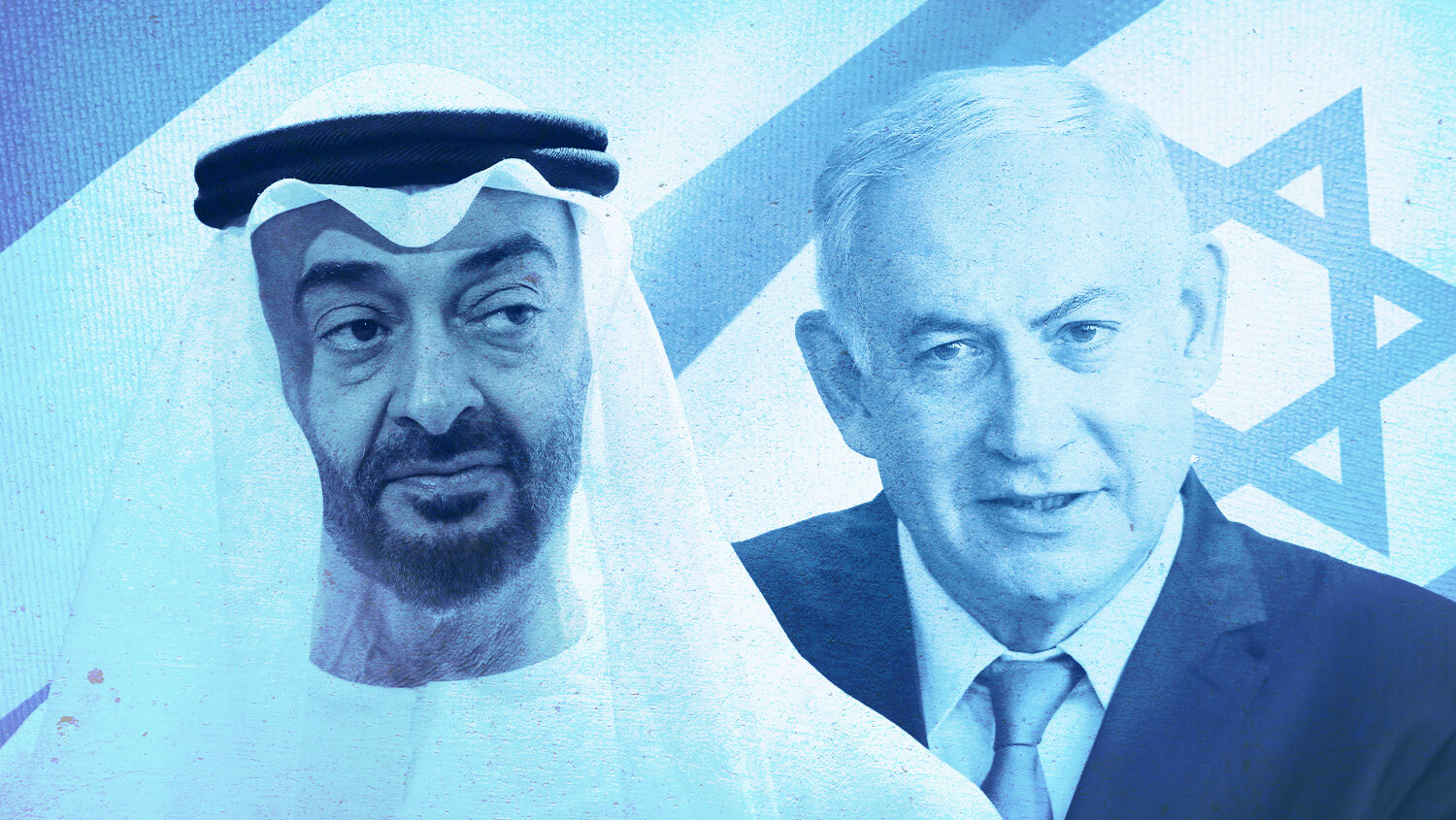 The reason for the historic agreement between the United Arab Emirates and Israel holds a clue as to how it will end.

The decades-old paradigm for Middle East peace was formally uprooted on August 13 when the United Arab Emirates became the third Arab state to normalize relations with the Jewish state of Israel. The first two—Egypt in 1978 and Jordan in 1994—signed peace agreements with Israel to formally settle terms after numerous bloody wars between the nations.

But the case with the U.A.E. is different. This is not about a cold peace and a militarized border as exists between Egypt and Jordan, but rather a full normalization of ties. Nicknamed the “Abraham Accords” after the biblical patriarch of both the Arabs and Jews, this agreement means the U.A.E. plans to treat Israel like every other nation, one open to cooperation, travel, trade and security partnerships.

Before this deal, the Arab consensus was that Israel would only be treated like a normal nation once it made peace with the Palestinians. Palestine first, Arab world second.

On August 14, the Emirates flipped the script and embraced Israel without any progress on the Palestinian issue.

This is a huge shift in Arab policy toward the Jewish state and a turning point in Arab-Israeli relations.

“This historic diplomatic breakthrough will advance peace in the Middle East region and is a testament to the bold diplomacy and vision of the three leaders,” read the joint statement by United States President Donald Trump, Israeli Prime Minister Benjamin Netanyahu and U.A.E. Crown Prince Sheikh Mohammed bin Zayed al-Nahyan. “All three countries face many common challenges and will mutually benefit from today’s historic achievement.”

While it will take some time for full cooperation between the states to take place, deals are already being signed. Within two days of the White House announcement, a U.A.E. investment company signed a “strategic commercial agreement” with an Israeli company over research and development related to the coronavirus. Phone lines are now active between Israel and the U.A.E. Israeli websites are no longer blocked by U.A.E. servers. Israeli airline carrier Israir is in discussions to begin direct flights between Tel Aviv and Abu Dhabi and Dubai. And in a sign of tacit support, Saudi Arabia will allow Israeli passenger jets to fly over Saudi territory.

As Israeli commentators have noted, the agreement is a boon for Prime Minister Netanyahu’s leadership. “Stunningly, Abu Dhabi’s groundbreaking decision to fully normalize relations with Jerusalem did not require any tangible concessions of Israel,” wrote Raphael Ahren for the Times of Israel. “Netanyahu did not agree to withdraw from one centimeter of West Bank territory. He did not evacuate a single settler. He didn’t even have to pay lip service to the idea of Palestinian statehood or pledge allegiance to the two-state solution” (August 14).

The one thing Netanyahu granted was to suspend plans to apply Israeli sovereignty to parts of the West Bank, including East Jerusalem and the Jordan Valley. The rumor that Israel would have President Trump’s blessing to annex West Bank territory had provoked a roar of backlash from the Arab world. The text of the U.A.E. agreement deliberately used the word “suspend”: Annexation may still happen in the future, but it is off the table for now. And for that act, Israel achieved peace with an Arab state.

The strategic decision to halt the annexation of the West Bank also allowed Mohammed bin Zayed to save face in making the agreement. He tweeted on August 13, “During a call with President Trump and Prime Minister Netanyahu, an agreement was reached to stop further Israeli annexation of Palestinian territories. The U.A.E. and Israel also agreed to cooperation and setting a road map towards establishing a bilateral relationship.”

Iran’s growing power, augmented by the U.S. under President Obama, compelled the U.A.E. and Saudi Arabia to seek alternative means of resisting Iran.

And with the U.A.E. pioneering the acceptance of Israel without demanding hard-hitting concessions on the Palestinian issue, other Gulf states could soon follow. Even Thomas Friedman of the New York Times was impressed and indicated that the door is now open for more nations to recognize Israel. In his August 13 piece, “A Geopolitical Earthquake Just Hit the Middle East,” Friedman noted, “This deal will certainly encourage the other Gulf sheikhdoms—Bahrain, Oman, Qatar, Kuwait and Saudi Arabia—all of which have had covert and overt business and intelligence dealings with Israel, to follow the Emirates’ lead. They will not want to let the U.A.E. have a leg up in being able to marry its financial capital with Israel’s cybertechnology, agriculture technology and health-care technology, with the potential to make both countries stronger and more prosperous.”

Bahrain is thought to be the next Gulf state to follow the U.A.E.’s lead, even this year. President Trump said, “Now that the ice has been broken, I expect more Arab and Muslim countries will follow the United Arab Emirates’ lead.”

In hindsight, one can see that the U.A.E. deal was in the works for the past five years. As Ben Caspit noted in Al Monitor on August 18, the first sign came in 2015 when the U.A.E. allowed Israel to open an office in the International Renewable Energy Agency in Abu Dhabi. Israel and the U.A.E. have quietly formed additional connections, including some military intelligence sharing and joint weapons contracts. The head of Israel’s Mossad intelligence agency has frequently visited the U.A.E. over the past couple of years in particular.

The thaw between the two countries five years ago coincided with an even more significant event in the Middle East: U.S. President Barack Obama’s Joint Comprehensive Plan of Action. Signed in 2015, the Iran nuclear deal effectively sought to “share” the Middle East among what are now rival powers: Iran, Gulf states like the U.A.E., and Israel. This huge shift in American policy rewarded the terrorist state of Iran and degraded America’s relationship with the Gulf states and Israel.

This brazenly pro-Iran policy terrified the U.A.E., since it was (and is) at war alongside Saudi Arabia against Iran’s Houthi proxy in Yemen. Iran’s growing power, immensely augmented by the United States under President Obama, compelled the U.A.E. and Saudi Arabia to look for alternative means of resisting Iran. In the end, this meant allying with Israel.

“The greater Iran’s involvement in ‘spreading the revolution’ by encouraging terrorism and undermining the region’s regimes, the [more] the [U.A.E.’s] relationship with the Jewish state advanced,” Caspit wrote. “The more the United States withdrew from the Middle East and removed its influence over its crazies, … Israel remained the only anti-Iran bastion of stability” (August 18).

The Abraham Accords are an admission of the need to counter the radical Islamic state of Iran—they are not evidence of newfound love between Gulf Arabs and the Jewish state. Ghaith al-Omari, a senior fellow at the Washington Institute for Near East Policy, said, “Iran is at the center of the convergence of interest between Israel and the U.A.E., both of whom see it as an existential threat, and this step will bolster the anti-Iranian axis” (Hill, August 13).

This is a relationship of convenience. Israel should not take for granted the longevity of a peace deal with any Gulf state.

In fact, biblical prophecy shows that it should be extremely concerned.

In his booklet The King of the South, Mr. Flurry explains how biblical prophecy foretells two alliances in the end time involving Middle Eastern states. The first is what Daniel 11 names “the king of the south,” a radical Islamic alliance led by Iran. Daniel 11:40 describes this alliance pursuing an aggressive foreign policy that pushes the region to the brink of war. Prophecy shows that other nations in this alliance will include Iraq, Ethiopia, Egypt and Libya.

The second alliance is prophesied in Psalm 83, a biblical book not many people consider prophetic. However, Lange’s Commentary and the Anchor Bible note that the alliance of nations forecast in Psalm 83 has never existed before.

“For they have consulted together with one consent: they are confederate against thee: The tabernacles of Edom, and the Ishmaelites; of Moab, and the Hagarenes; Gebal, and Ammon, and Amalek; the Philistines with the inhabitants of Tyre; Assur also is joined with them …” (verses 5-8).

The Middle Eastern nations listed in this psalm correspond to modern nations where mainly Sunni Islam is prevalent today. Ishmaelites is the prophetic term for the Arabs of modern Saudi Arabia and other Gulf states. Edom and Amalek describe modern-day Turkey. Moab and Ammon are located within Jordan today. The ancient Hagarenes dwelt in the land of modern Syria. Gebal and the inhabitants of Tyre are modern Lebanon, and the Gaza Palestinians are located in the territory belonging to the Philistines. Assur refers to modern-day Germany, as we prove in our free reprint “The Remarkable Identity of the German People” (theTrumpet.com/go/GermanIdentity). All these nations will be allied together.

Importantly, none of the “king of the south” nations in Daniel 11:40-42 are listed here.

Put together, these two passages of Scripture describe the two alliances forming now in the Middle East. One is the pro-Iran alliance. The other is anti-Iran.

The United Arab Emirates and other Gulf nations are part of the anti-Iran alliance. In this regard, they find their goals aligning with those of Israel.

However, although the Psalm 83 alliance may unite to counter Iran’s rise, the Bible reveals that its main purpose will be very different.

“They have taken crafty counsel against thy people, and consulted against thy hidden ones. They have said, Come, and let us cut them off from being a nation; that the name of Israel may be no more in remembrance” (verses 3-4).

This is what your Bible foretells.

It is natural to celebrate when we hear announcements of peace between Israel and Arab states. Yet the Bible tells us to beware claims of peace. The Prophet Jeremiah warned that false prophets would say, “Peace, peace; when there is no peace” (Jeremiah 6:14; 8:11). This is especially true regarding illusions of peace in the Middle East.

These prophecies show that long-term peace will not come to the Middle East through this or similar peace deals between the Jewish state and the Arab Gulf states. But there is comfort in knowing that events in the region are lining up with the prophecies of your Bible. Remember, these prophecies, made thousands of years ago, were fully revealed only in our lifetime—the time in which they would come to pass. Some would like to dismiss the Bible as a series of man-made writings compiled over hundreds of years to further a pro-Israel or pro-Jewish agenda. While the Bible is a book about Israel, its authenticity is corroborated through fulfilled prophecies that concern the whole world. As the Psalm 83 alliance comes together, and alongside Israel temporarily, we can be assured that the Bible is God’s Word, and that He is actively involved in our nations today.