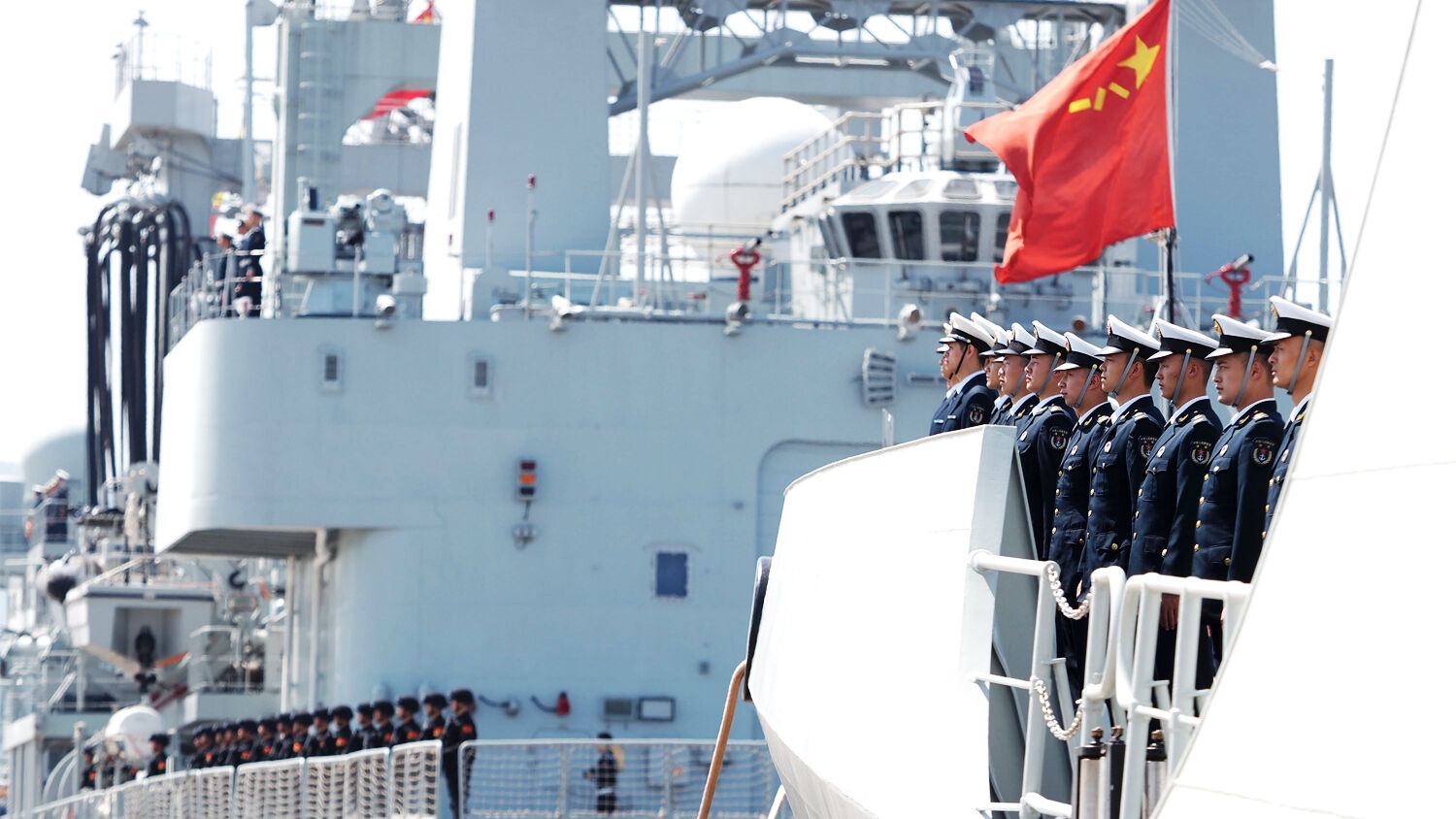 Officers and soldiers of the Chinese naval fleet for escort mission line up on the deck at a port in Zhoushan, east China’s Zhejiang province.
Xinhua/Jiang Shan/Getty Images

China has ‘marshalled the resources, technology and political will over the past two decades to strengthen and modernize’ its military ‘in nearly every respect.’

The Pentagon released its annual report to Congress about China’s military power on September 1, concluding that the People’s Liberation Army (pla) has surpassed America in the number of naval ships and missile development and is on the fast track to become a “world-class” military power.

The 200-page document, titled “Military and Security Developments Involving the People’s Republic of China 2020,” marks the 20th annual report on the pla that the Department of Defense has delivered to Congress. The tone of this year’s analysis is unambiguously more urgent than in previous years, as Pentagon officials seek to waken United States policymakers to the dangers of China’s rapidly growing firepower.

The report says the overarching aim of the People’s Republic of China, or prc, is to “develop a military by mid-century that is equal to—or in some cases superior to—the U.S. military, or that of any other great power that the prc views as a threat.” This has “serious implications for U.S. national interests and the security of the international rules-based order.”

Toward the conclusion, it states that China has “marshaled the resources, technology and political will over the past two decades to strengthen and modernize the pla in nearly every respect.” And the nation has already crossed some major milestones. The report states:

The prc has the largest navy in the world, with an overall battle force of approximately 350 ships and submarines including over 130 major surface combatants. In comparison, the U.S. Navy’s battle force is approximately 293 ships as of early 2020.

It is true that comparing only the number of ships gives an incomplete picture. The U.S. Navy remains ahead of China’s in terms of tonnage, and many of China’s vessels are considerably less advanced than those of America’s fleets. But that is no longer the case across the board, particularly in the case of the “130 major surface combatants.”

In terms of shipbuilding capacity, China has already surpassed America. As such, we should expect the gap in numbers to keep widening—unless some drastic changes are made.

Another section of the report focuses on China’s goal of developing support structures for its military at locations around Asia and beyond. The purpose is to be able to “project and sustain military power at greater distances.”

The People’s Liberation Army has already built an overt military base in Djibouti, on the horn of Africa. And the Pentagon report notes that it aims to build similar bases to support naval, air and ground forces in numerous other nations: Angola, Indonesia, Kenya, Myanmar, Pakistan, the Seychelles, Singapore, Sri Lanka, Tajikistan, Tanzania, Thailand and the United Arab Emirates.

In some of these countries, China’s progress has been rapid. And even though its current activities generally appear to be for civilian purposes, the Pentagon argues that China could quickly transform such installations into military bases to support a future pla footprint. “A global pla military logistics network could interfere with U.S. military operations,” the report notes, adding that it could also “provide flexibility to support offensive operations against the United States.”

The Pentagon also sounded the alarm on China’s nuclear weapons and missile programs. The pla presently has 200 nuclear warheads, but the report says it is in the process of doubling that number, and will soon have 400.

China has been in overdrive developing and improving various types of missiles that can deliver its growing number of nuclear warheads to their targets. The report counts more than 1,250 ground-launched ballistic and cruise missiles now in the Chinese arsenal. Some of these, such as China’s hundreds of DF-26, have ranges up to 2,500 miles.

When it comes to mobile intermediate-range ballistic missile launchers, the Pentagon notes that just a year ago China had only 80. That number is now 200, and set to keep multiplying. When the increase in nuclear warheads is placed alongside the growing number of missiles and launchers, it is clear that some of the most technologically advanced areas of China’s military modernization drive are happening at lightning speed.

The report emphasizes that the Chinese Communist Party (ccp) that rules the nation is not building up this military power for show: “[T]he ccp desires the pla to become a practical instrument of its statecraft with an active role in advancing the prc’s foreign policy, particularly with respect to the prc’s increasingly global interests and its aims to revise aspects of the international order.” In other words, the ccp is determined to bring an end to the era of American military dominance, and this goal is at the heart of its rapid military modernization.

In light of reports such as this new one from the Pentagon, it is plain for onlookers today to see what students of Bible prophecy have long understood. In 1934, when Herbert W. Armstrong identified China as one of the Revelation 16:12 “kings of the east,” which will play a major role in the final world war, faith was required to believe it. At that time, China was weak, undeveloped and too consumed by internal turmoil to pose a formidable threat to the global order. The reality appeared to dispute Mr. Armstrong’s forecast. But developments have occurred, time has marched on, and the early stages of his forecast about China are now happening.

Under President Xi Jinping, modern China has become a dynamic military power bent on domination. It now fits the description of what prophecy watchers would expect for a mighty, revisionist “kings of the east” nation.

In the August 2020 issue of the Philadelphia Trumpet, editor in chief Gerald Flurry examined China’s rising power in the context of specific Bible prophecies. In his article titled “Where Is the China-America Clash Leading?” he focused especially on China’s increasing naval might and its domination of the South China Sea. He wrote: “In Deuteronomy 28:52, God says that if the descendants of Abraham [meaning modern-day America and Britain] rejected Him, He would cause their enemies to take control of the gates.”

Mr. Flurry explained that “gates” in this scripture means maritime locations that let a country “allow or deny access” to a given region. By boosting its naval power and controlling the South China Sea, Mr. Flurry said, “China is prying the region away from American power.” The Pentagon’s new report vindicates this view, particularly in its assertion that China’s military might has “serious implications for U.S. national interests and the security of the international rules-based order.”

To understand the big-picture significance of China’s rapidly growing firepower, and what it means for the United States and the whole world, read “Where Is the China-America Clash Leading?”