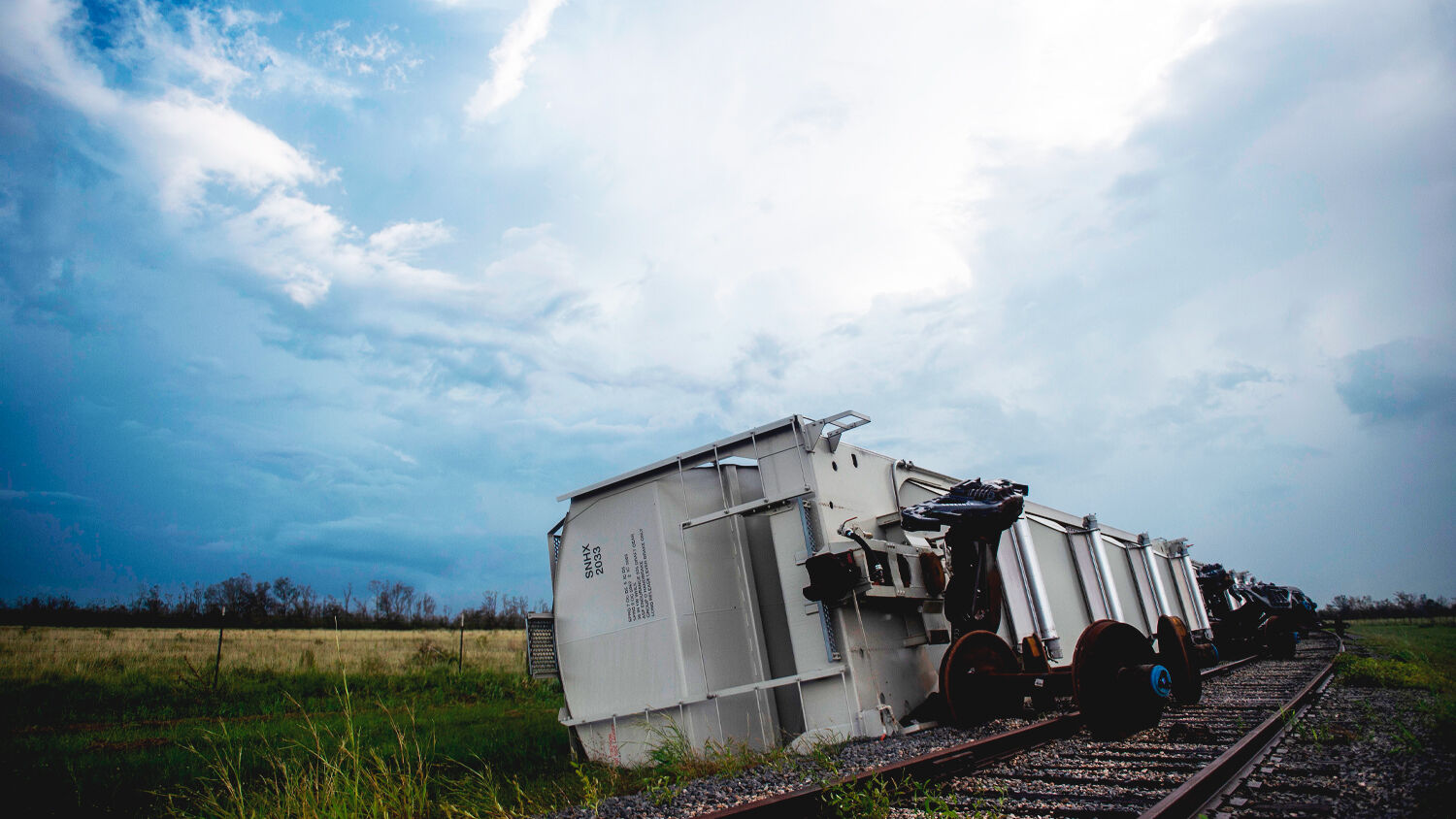 A derailed train lies on the side of the tracks after the passing of Hurricane Laura near Lake Charles, Louisiana on August 28, 2020.
ANDREW CABALLERO-REYNOLDS/AFP/Getty Images

What is the real cause of weather disasters?

The “climate crisis” is making headlines once again. Over 1 million acres in California have burned this week in some of the largest wildfires the state has ever experienced. Tens of thousands of people have been evacuated as the approximately 93 active fires—including the second- and third-largest in California’s history—have burned over 1.6 million acres of land in California, Arizona, Colorado, Montana, Nevada and Oregon.

At the same time, Tropical Storm Marco was followed by Hurricane Laura, a Category 4 hurricane when it made landfall around Louisiana. “The unprecedented kind of thing here is that it’s the same state within 48 hours of each other,” National Weather Service meteorologist Benjamin Schott said. “In modern meteorological history … there’s never been anything like this before where you could have possibly two hurricanes hitting within miles of each other over a 48-hour period.”

Laura was the strongest storm to make landfall in Louisiana in over 100 years. At least six people are dead and tens of thousands are without power. The hurricane hit Haiti and the Dominican Republic, killing at least 12 people.

The 150-mph winds were record-breaking, making it the fifth-strongest hurricane to make landfall in the continental United States, surpassing even the strength of Hurricane Katrina in 2005.

This year’s Atlantic storm season, which runs through November, could be one of the busiest ever, with the Hurricane Center predicting as many as 25 named storms. Laura is the 12th so far.

As bad as 2019 was, with all its record-breaking disasters, 2020 is set to possibly be far worse. Something unusual is happening in the United States. And most have unequivocally decided that climate change is to blame.

Hillary Clinton tweeted: “This week, millions of Americans will face the devastating effects of the kinds of fires and hurricanes climate change has made both more likely and more severe.” Seventeen-year-old activist Greta Thunberg urged German Chancellor Angela Merkel to be “brave enough to think long term” in a meeting with her on the climate crisis on August 20. Massachusetts Sen. Elizabeth Warren called the climate crisis an existential threat. Rep. Ilhan Omar said the climate crisis is real and it is happening now.

Today’s environmentalism almost universally attributes climate change as the cause of weather disasters, from politicians and public figures to the media. The New York Intelligencer wrote an article titled “Climate Change Has Led to Extreme Wildfires in California.” usa Today wrote that California shows us the future of climate change. North Carolina State News is reporting that climate change is going to make beer taste different.

As universally accepted as it is, climate change is not the problem. Our booklet Why ‘Natural’ Disasters? explains: “When climatic disasters occur, the usual political and media response is to blame the trend on ‘climate change.’ The worse the disaster, the louder the calls for taking action against climate change by addressing the supposed man-made causes, such as carbon emissions and the use of fossil fuels. This view about ‘climate change’ has taken hold of millions of minds around the world. It is often presented as if it is irrefutable scientific fact.”

Why is this so dangerous? What is so wrong about declaring climate change as the reason for all these devastating weather-related events? The truth is that this ideology, the idea that climate change is responsible for all these terrible disasters, is the exact opposite of what God says.

Human activity does cause problems. The environment is harmed by the industrial release of synthetic compounds, the replacement of forests with cities and asphalt, and the gaseous release from the exhaust of cars, planes and trains. But there is another far more significant reason for these disasters, and it is spiritual in nature.

This mainstream and almost universally accepted threat of climate change is a “deadly deception,” according to Trumpet editor in chief Gerald Flurry.

Many often ask why God allows such disasters to strike. Some believe that disasters themselves are proof that there is no God. However, as our booklet states, “One reason God sends storms is for correction. Yes, sometimes God bathes the Earth with gentle rain to show His loving concern and mercy—and other times God uses the weather to correct people! Do you believe in that God?”