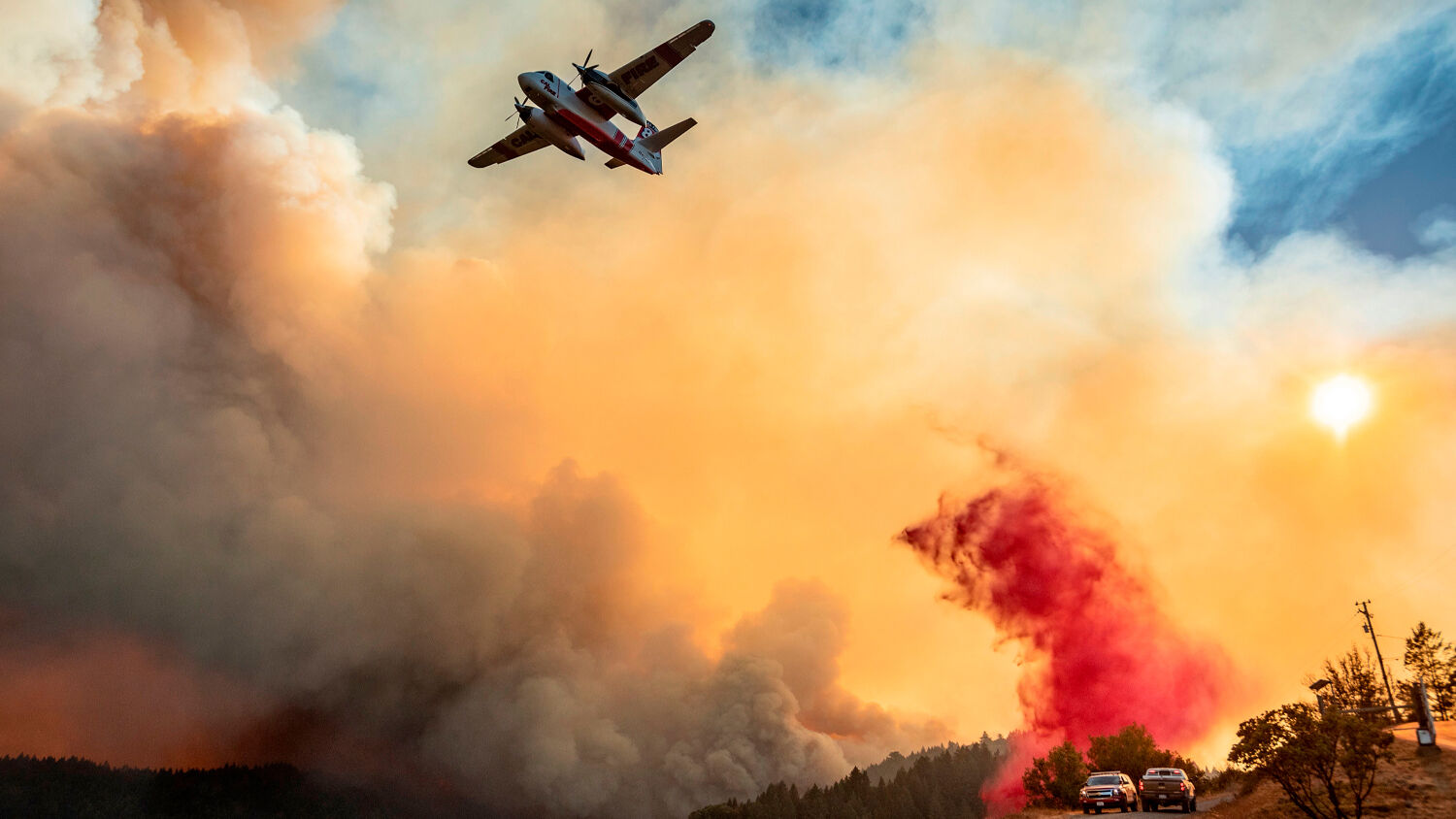 An aircraft drops fire retardant on a ridge during the Walbridge Fire, part of the larger LNU Lightning Complex fire, as flames continue to spread in Healdsburg, California, on August 20.
JOSH EDELSON/AFP/Getty Images

Climate change is claiming lives—just not in the way most think.

Since the lightning strikes began, 1.2 million acres (1,875 square miles) have been scorched. Last year by this time, California had lost only 56,000 acres (88 square miles) to fire. Over a five-day period this year, California lost more land to fire than it did in all of 2019.

As of August 25, seven people have died and 12,000 structures have been burned to the ground. Over 7,000 fires of various sizes are still raging. More than half of the total area burned is in the San Francisco Bay area.

Two of the fires now hold the record for second- and third-largest ever recorded. If not soon contained, they may claim the record for California’s largest-ever wildfire.

There will likely be more destruction before the end of the year, as the fire season is only beginning in California.

While fires are the most immediate problem, they are not the only one. Much of the response has been slowed and complicated by two other issues: blackouts and coronavirus restrictions.

Firefighting in California is partly done by prisoners. Normally, 190 inmate crews stand ready to respond. However, state leaders decided to decrease the number of crews this year to just 90. This is mainly due to coronavirus quarantines imposed on prisons and early releases of prisoners. As a result, firefighters are lacking extra help at a critical time.

In addition to shortages of fire crews, coronavirus restrictions have brought “an almost oppressive level of complexity” to the work of providing shelter for displaced residents, California’s director of the Office of Emergency Services told the New York Times.

As fires rage on, darkness is blanketing the state—not only because of smoke but also blackouts. California is experiencing a record-setting heat wave. In Death Valley, temperatures reached 130 degrees Fahrenheit, placing high demand on the electrical grid. Blackouts are worse this year because of the state’s attempt to switch over to “green” or renewable energy sources.

Currently, 36 percent of the state’s energy comes from renewable sources like solar energy. Traditional power plants have been shut down, and Democrats want to see the state reach 60 percent reliance on solar and other “green” energy by 2030. This should not have come as a surprise, but it has come at one of the worst possible times. The state’s power grid operator “has been warning for years that the state’s increasing dependence on intermittent renewables, especially solar, is making it harder to ensure reliable power,” reported the Wall Street Journal.

As California burns, the other side of the country is on alert for floods. Having two hurricanes at once in the Gulf of Mexico hasn’t happened since record-keeping began 150 years ago. But this week, it happened. Hurricane Marco made landfall as a tropical storm on August 24, breaking a rainfall record in Florida that has stood since 1966. Texas and Louisiana are now bracing for Hurricane Laura, which could arrive as a Category 3 hurricane, bringing severe flooding.

The media and general public ascribe these events to man-made climate change. While it is true that mankind tends to pollute its environment, it is worth asking: Could there be a deeper, more deadly reason for the fires ravaging California? Or for the floods wreaking havoc on Florida, Louisiana, Texas and other states?

In his February 2018 article “The Deadly Climate Change Deception,” Trumpet editor in chief Gerald Flurry wrote, “Analysts and experts have dangerously misdiagnosed the cause of devastating weather disasters.”

So what are they failing to take into account?

Bible prophecy specifically forecasts weather-related curses to come on the modern descendents of ancient Israel for their refusal to hear God’s warnings. The United States is one of those descendants (prove this by reading our free book The United States and Britain in Prophecy). In his article, Mr. Flurry cited Amos 4:7, where God says, “And also I have withholden the rain from you, when there were yet three months to the harvest: and I caused it to rain upon one city, and caused it not to rain upon another city: one piece was rained upon, and the piece whereupon it rained not withered.”

Doesn’t this sound like the mix of fires and floods pounding the U.S. in recent years? This was prophesied for our day. He explained:

Here God is controlling the rainfall, causing floods and droughts! Why would He do that? Verse 8 answers: “So two or three cities wandered unto one city, to drink water; but they were not satisfied: yet have ye not returned unto me, saith the Lord.” God causes these conditions as punishment for pushing Him out of our lives.

Climate change is claiming lives—just not in the way most think. Believing climate change is responsible for the devastation, instead of turning to the God who created the weather and environment, is what perpetuates the problem.

This Bible prophecy is a warning for California (and all of end-time Israel), but it should also bring great hope, because there is a definite way to stop the suffering. That can only be done by seeing past the deception of climate change and comprehending why God allows weather disasters in the first place. “The Deadly Climate Change Deception,” by Gerald Flurry, along with our free booklet Why ‘Natural’ Disasters? will make this understandable and provide a sure way of escape from current and future disasters.