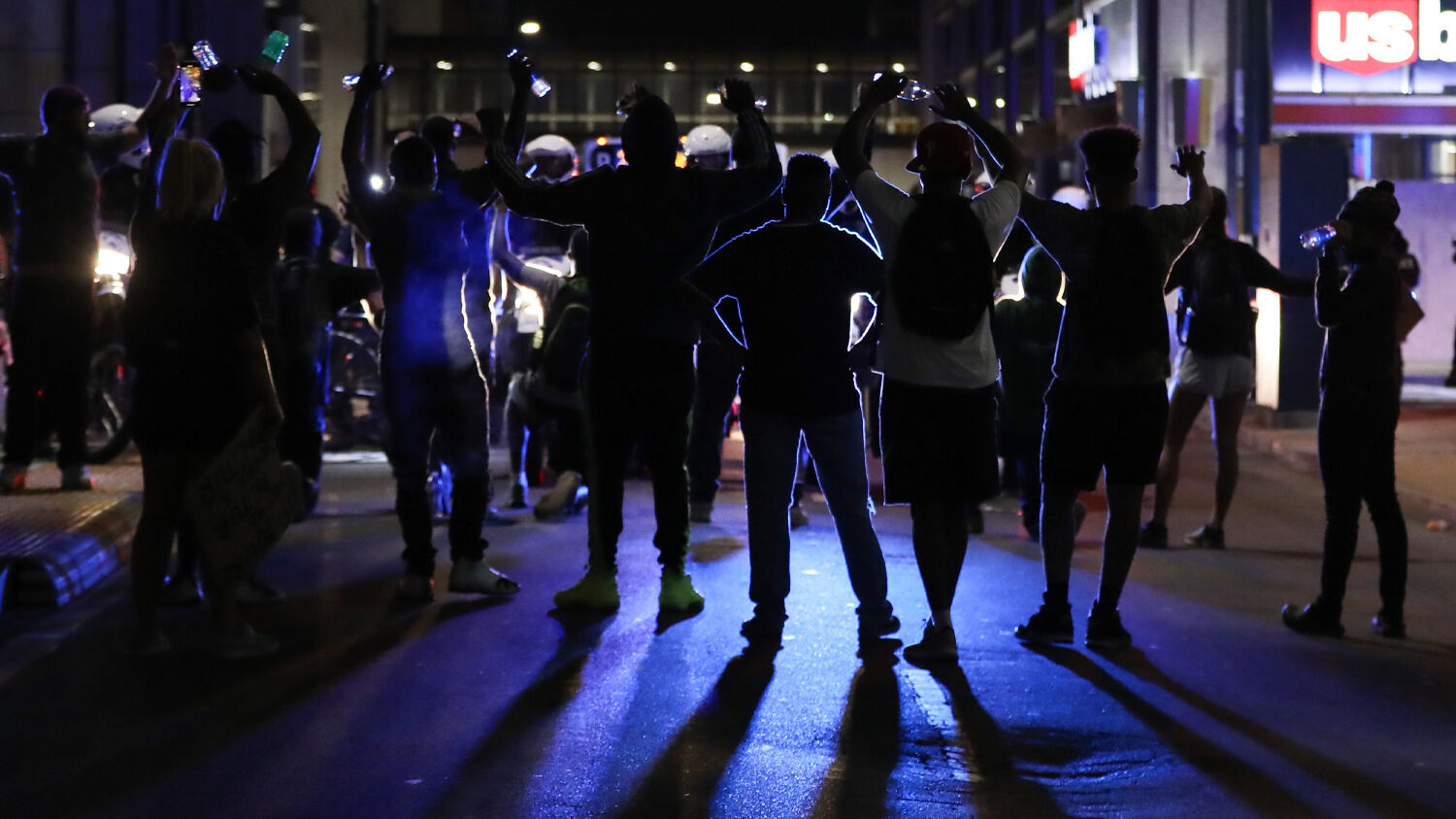 Rioters block the path of CMPD officers as they attempt to make an arrest near uptown Charlotte, North Carolina on June 2, 2020.
LOGAN CYRUS/AFP/Getty Images

Radical activists are organized in two distinct movements: one in government and the other in the streets.

During the 15 weeks since George Floyd was killed by a Minneapolis police officer, more than 4,700 protests have been organized in 2,500 cities and towns across the United States. Pew Research Center estimates that 15 million adults participated in these demonstrations, making them part of the largest protest movement in U.S. history. Many of these demonstrations escalated into large-scale riots costing hundreds of millions of dollars in property damage. Insurance experts estimate the costs of the damage in the Minneapolis-Saint Paul metropolitan area could exceed $500 million, making the Twin Cities protest the second-costliest civil disturbance in U.S. history, after the 1992 Los Angeles uprising.

At least 19 people have been killed in George Floyd protests, and over 1,400 have been arrested.

A protest movement on this mass scale does not just happen. Demonstrators have to be told where the protests are being held, what time they need to show up, and where they can pick up their placards. A large protest involving more than 100,000 can cost a planner over $1 million to host and organize. So, who is paying for the George Floyd protests?

President Donald Trump confirmed in an extensive on-camera interview with Fox News host Laura Ingraham on August 31 that “some very stupid rich people” were financing riots in America. Meanwhile, Homeland Security Secretary Chad Wolf told Fox News’s Tucker Carlson that an official investigation is underway into the funding of rioting nationwide. Wolf was specifically referring to allegations that organizations and individuals were paying for professional rioters to move from protest to protest across the country. We do not yet know for sure who is paying these professional rioters, but we do know who is paying for some of the demonstrations where these professional rioters go to stir up trouble.

The nonprofit organization Black Visions Collective received $19 million in online donations this summer, while its partner organization Reclaim the Block collected $11 million. These two groups have been fighting to abolish the Minneapolis Police Department for years, and have been involved in organizing protests in the Minneapolis-Saint Paul metropolitan area. Oluchi Omeoga, a founder of Black Visions Collective, even declared looting a form of reparations, saying looters were “taking from corporations and giving it back to people who actually need the resources.”

Even if you cannot prove that groups like Black Visions Collective are deliberately stirring up riots, why would a politician fundraise for an organization that declares looting a justifiable form of reparations?

In a 1957 tract, Czech Communist Party theoretician Jan Kozak explained how a small number of Communists managed to gain power in Czechoslovakia through parliamentary maneuvers. The trick was to exert pressure for radical change from two directions simultaneously—from the upper levels of government and from provocateurs in the streets. Kozak called this tactic “pressure from above and below.” One way to exert “pressure from below,” as Kozak explained, was to fill the streets with rioters, strikers and protesters, thus creating the illusion of a widespread clamor for change from the grassroots. Radicals in the government would then exert “pressure from above,” enacting new laws on the pretext of appeasing the protesters in the street—even though the protesters (or at least their leaders) were themselves part of the plot. The majority of the people would have no idea what was going on. Squeezed from “above” and “below,” most would sink into apathy and despair, believing they were hopelessly outnumbered by the radicals— even though they were not. Thus could a radical minority impose its will on a moderate majority, even under a democratic parliamentary system.

Many politicians in America today want to overthrow America’s constitutional system of government and replace it with a socialist system. Yet the silent majority of American citizens do not want to tear down the system. To convince the silent majority that the nation needs to be fundamentally transformed, the radicals need to create “the illusion of a widespread clamor for change from the grassroots.” This is why politicians like Barack Obama, Kamala Harris, Bernie Sanders and Alexandria Ocasio-Cortez are encouraging 15 million people to protest the murder of George Floyd, even though Floyd’s killer was fired, arrested and charged with murder almost immediately after Floyd’s death.

They are creating a problem for the government to step in and fix.

Four years ago, Trumpet editor in chief Gerald Flurry wrote “The Real Agenda Behind Black Lives Matter.” In that article he predicted that this radical organization would act as provocateurs for the Obama administration, helping the radical left tear down America’s system of government so that Democratic politicians could fill the void with a new socialist system. The more than 4,700 protests that spread across America this past summer show that his analysis was right.

The Bible prophesies this about America and Britain in the end time: “Your country is desolate, your cities are burned with fire: your land, strangers devour it in your presence, and it is desolate, as overthrown by strangers” (Isaiah 1:7).

The racially charged rhetoric being hurled by politicians is stirring up hatred and anger, while the money activists are funneling to groups like Black Visions Collective is creating ideal conditions for violence. This is part of a deliberate strategy to undermine America’s constitutional system of government. There is also an evil spiritual force at play that is going to amplify the violence to levels that even the most unscrupulous activists could not imagine. If you have not proved this truth, you desperately need to do so. We will send you a free copy of Gerald Flurry’s booklet America Under Attack. It explains the hidden, spiritual dimension behind the radical left’s strategy to fundamentally transform America!