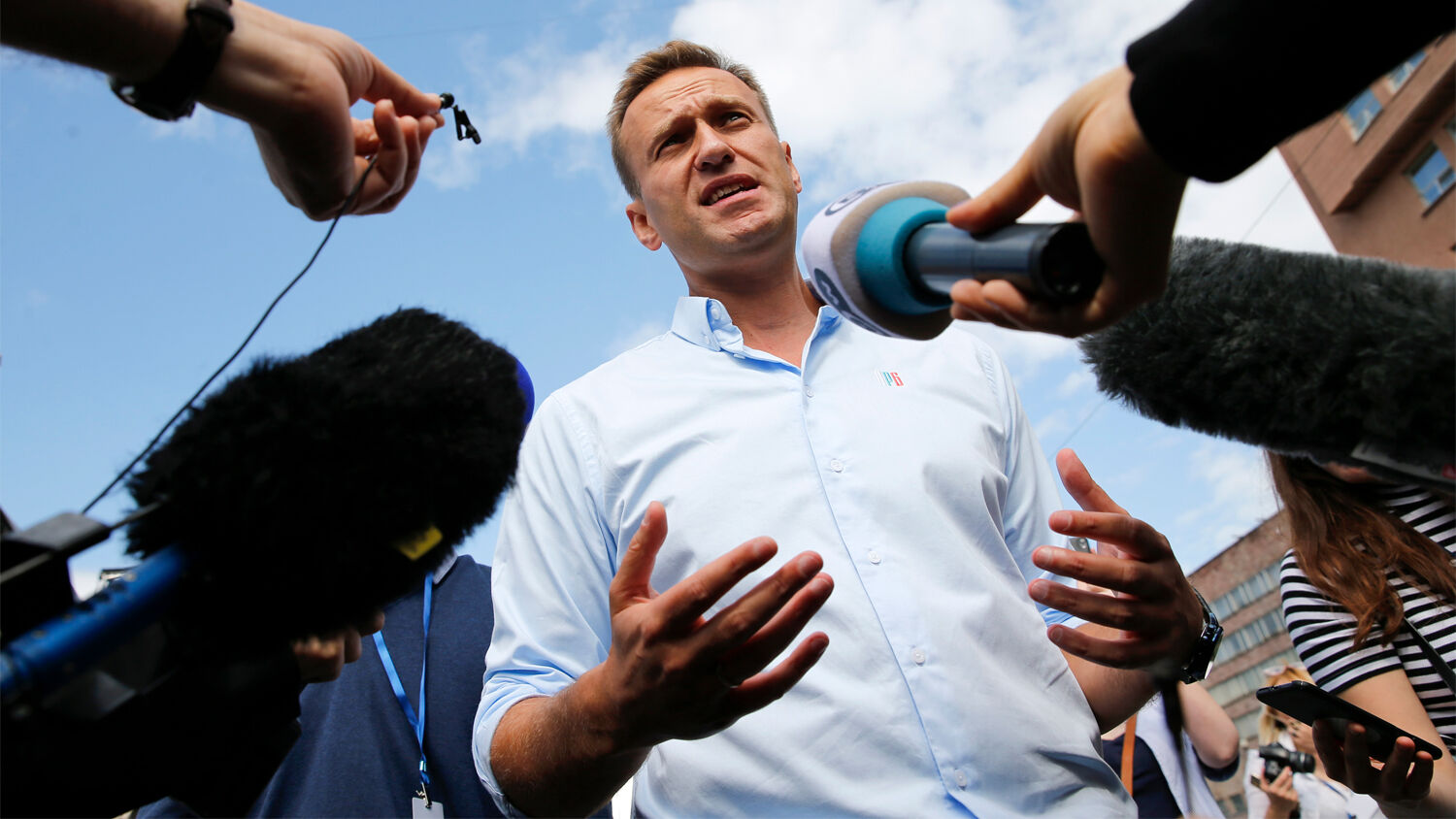 Russian opposition leader Alexei Navalny speaks with journalists in Moscow during a rally to support opposition and independent candidates after authorities refused to register them for September elections to the Moscow City Duma on July 20, 2019.
MAXIM ZMEYEV/AFP/Getty Images

‘Whether or not he gave the order personally, the blame lies with him.’

Navalny is a 44-year-old politician and activist who rose to prominence for exposing corruption by Putin and his cronies and organizing various protests against them. In a now famous 2011 radio interview, Navalny described Putin’s political party, United Russia, as a “party of crooks and thieves.” The phrase became a prevalent epitaph for Putin’s regime and helped seal Navalny’s reputation as the Kremlin’s fiercest critic. The next year, the Wall Street Journal described Navalny as “the man Vladimir Putin Fears most.”

Navalny has been arrested numerous times for trumped-up charges and has been jailed more than 10 times, totaling hundreds of days in custody. The true cause of these arrests is well understood to be his anti-Putin political activities.

But this time, the evidence indicates that Putin believed arresting and imprisoning Navalny was no longer enough.

On Thursday, August 20, Navalny was airborne en route from Tomsk, Siberia, to Moscow when he fell ill. The sickness hit him fast and hard, forcing the pilot to make an emergency landing. Navalny was rushed to a hospital in the city of Omsk where he slipped into a coma. He was placed on a ventilator as he fought for his life.

German officials, including Chancellor Angela Merkel, petitioned Moscow to let Navalny be transferred to Berlin’s main hospital for treatment. But the Russians denied the request until Saturday morning. Navalny was then flown on a plane laden with advanced medical equipment to the Charité hospital in Germany’s capital.

Specialists there said their tests found traces in his system of cholinesterase inhibitors.

These inhibitors block the breakdown of acetycholine, causing overstimulation in the connections between nerves and muscles. They are found in several drugs and also in nerve agents and pesticides. Ingesting large quantities of them can be fatal. Though Charité doctors have not determined which specific substance Navalny was exposed to, his colleagues say tea he drank at the Tomsk airport before boarding must have been the source of the poison.

German doctors are treating him with the antidote atropine and say his condition is no longer life threatening. But Navalny remains in a medically induced coma, and a hospital statement said “the possibility of long-term effects, particularly those affecting the nervous system, cannot be excluded.”

Much remains unknown about this apparent assassination attempt. But Navalny’s team claim Russia delayed transporting him to Germany in an attempt to buy time for the poison to leave his body before tests could be done. They also released a statement putting the blame squarely on Vladimir Putin: “Whether or not he gave the order personally, the blame lies with him.”

George Friedman of Geopolitical Futures agrees with this assessment. “[I]t is hard to imagine any lower-level official ordering the Navalny operation,” he wrote on August 25. “It was far too public, and the repercussions far too difficult to predict, for such a bold move. The architect’s own life would be on the line. The order would simply have to come from higher up.”

In 2014, theTrumpet.com managing editor Brad Macdonald wrote: “Putin’s conduct inside Russia is … alarming and repulsive. Since he became president, 40 journalists have been murdered.”

These were mainly journalists working, as Navalny works, to expose corruption at various rungs of the Russian government. Putin prefers to leave his crimes concealed, so he had them silenced. Six years on from Mr. Macdonald’s article, the number of journalists killed on Putin’s watch is somewhere in the neighborhood of 130. And in the bulk of these cases, no one has been arrested or convicted for the murders.

There is also no shortage of evidence implicating Putin specifically with poisonings.

In 2004, it became clear that he was behind the poisoning of Ukraine’s opposition leader, Viktor Yushchenko. Yushchenko was running against a man who was essentially Putin’s puppet, so Putin had him poisoned. Yushchenko survived, but with lifetime health complications.

Two years later, the evidence shows that Putin had a dissenter named Alexander Litvinenko poisoned. This time the toxin was Poliun-210 and it was a lethal dose. Litvinenko spent two weeks watching his body break down, and then he died.

In 2018, former Russian spy Sergei Skripal and his daughter Yulia suffered a poisoning in the United Kingdom, which Putin is believed to have masterminded.

The list of assassinations and attempts with Putin’s fingerprints on them goes on and on. So if the Russian president were behind the poisoning of Alexei Navalny, as Navalny’s spokesperson, Friedman and other analysts say is the case, it would fit into a well-established pattern.

Putin is determined to stay in power. He has shown himself willing to use violence to remove threats to his position and to tighten his grip on the nation.

Putin’s PR machine sells this man as a brave and masculine daredevil with high morals and a soft, empathetic heart. Don’t buy it. The real Putin is a cold, calculated autocrat. For 14 years [now 20], he has bullied, tortured and murdered opponents, both at home as well as abroad; he has actively buttressed many of the planet’s most dangerous despots and regimes; he has intentionally destabilized neighboring governments, and he has aggressively sought to undermine U.S. and Western efforts.

The Trumpet keeps a vigilant eye on Putin’s machinations both inside Russia and abroad mainly because of a prophecy recorded in Ezekiel 38. This passage was written some 2,500 years ago, but it concerns events occurring in our time.

Verses 1 and 2 state: “Now the word of the Lord came to me, saying, Son of man, set your face against Gog, of the land of Magog, the prince of Rosh, Meshech, and Tubal, and prophesy against him” (New King James Version).

As the chapter continues, it is clear that a tremendously powerful and ruthless man is being described. And for more than six years now, Trumpet editor in chief Gerald Flurry has proclaimed who this individual is. In his cover story for our February 2014 issue, he examined the names listed in this passage:

Scholars generally agree that “Gog” is Russia, and that “the land of Magog” includes China. . … Meshech [is] related to the Russian spelling of Moscow, as you can read in the International Standard Bible Encyclopedia. What about Tubal? On the eastern side of the Ural Mountains lies the city of Tobolsk, named after the Tobol River, derived from Tubal. Tobolsk was once the seat of Russian government over Siberia and was basically considered Russia’s Asian capital. … Rosh was the ancient name of Russia, once called Rus.

Mr. Flurry then wrote: “So who is this ‘prince’ of Russia, Moscow and Tobolsk? The use of all three names states that this is an individual ruler of all the peoples of Russia, from the west to the east.”

This world has a lot of authoritarian rulers. But Vladimir Putin is one we need to keep a particularly close eye on. His track record, his nationality and his ideology indicate that he could—and I strongly believe he will—fulfill a linchpin Bible prophecy that was recorded millennia ago.

The time frame of his rule … shows that nobody else could be fulfilling the Ezekiel 38 and 39 prophecy. … I believe he is almost certain to be the “prince of Rosh” whom God inspired Ezekiel to write about 2,500 years ago!

Since we know that Vladimir Putin is fulfilling this tremendously important prophetic role, we should not be surprised to see him targeting his enemies with poison and other violence to secure his power.

For a complete explanation of who the two men in Ezekiel’s prophecy are, order your free copy of Mr. Flurry’s booklet The Prophesied ‘Prince of Russia.’