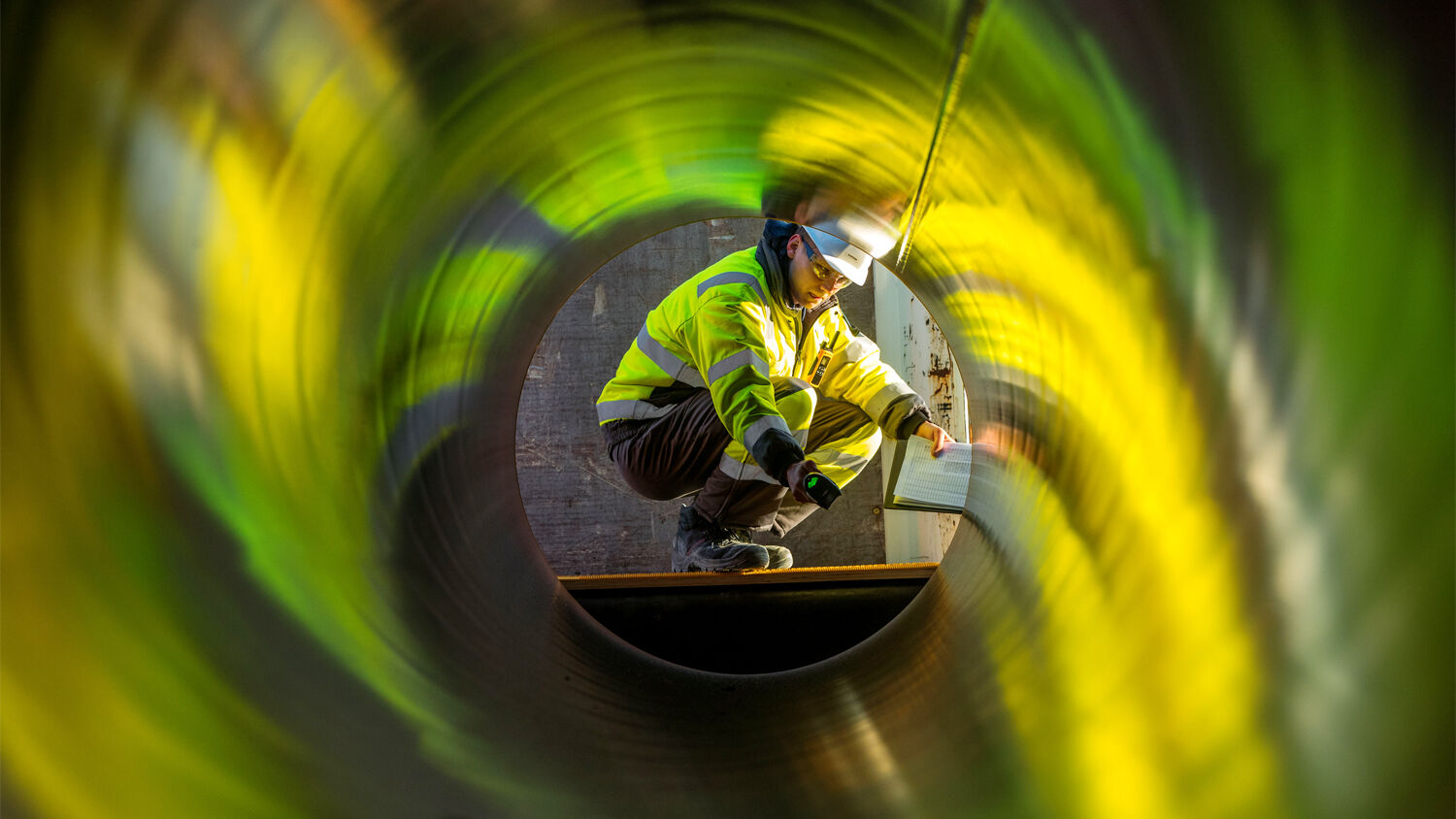 A worker inspects stacks of pipes weighing several tons each which will be used for the construction of the Nord Stream gas pipeline in the Sassnitz-Mukran harbour in northeastern Germany.
Jens Büttner/picture alliance via Getty Images

United States senators threatened “crushing” economic sanctions against a German port operator on August 5. Fährhafen Sassnitz GmbH operates Mukran Port on Germany’s Baltic coast and is a key base for work on Germany’s Nord Stream 2 pipeline. Senators Ted Cruz, Tom Cotton and Ron Johnson suggested that Mukran Port may qualify for sanctions the U.S. has already enacted against companies that participate in the construction of Nord Stream 2.

While Mukran Port has yet to publicly announce it would assist in this project, it is harboring two Russian ships, the Fortuna and the Akademik Cherskiy, that Moscow is planning to use to lay the pipeline.

Nord Stream 2 is an extension of the Nord Stream 1 pipeline that carries natural gas from Russia’s port of Vyborg across the Baltic Sea to Germany. Nord Stream 2 would double the pipeline’s capacity and carry gas to the rest of Europe. However, American sanctions on the project have slowed its development significantly.

Central and Eastern European states like Ukraine, Poland, Slovakia and Estonia are concerned that Nord Stream 2 will increase Europe’s energy dependency on Russia. It wasn’t that long ago that these countries were under Russian control. Some fear Russia is trying to bring them back into Moscow’s orbit.

The main concern is that Nord Stream 2 allows Russia to bypass its many pipelines in Ukraine. This could allow Russia to blackmail Kiev with the threat of turning off the taps, which happened in 2009, when Russia cut off energy to Ukraine for 13 days.

For these and other reasons, U.S. President Donald Trump has been one of the most outspoken critics of Nord Stream 2.

The sanctions would forbid anybody associated with the port from hosting any economic activity in the United States and would freeze any American assets owned by the corporation or its employees, board members or stockholders. Fährhafen Sassnitz GmbH is 90 percent owned by the municipality of Sassnitz and 10 percent by the German state of Mecklenburg-Vorpommern. While 10 percent may seem like a small number, Sassnitz is located in Mecklenburg-Vorpommern and the sheer size of the port would make it a valuable asset for the state.

This basically means that Washington is threatening sanctions against an asset of a German state government.

Mukran Port was constructed by the East German government during the 1980s to increase maritime links with the Soviet Union. When it was upgraded in the late 1990s, it was hailed as the biggest rail-ferry port in all of Germany.

Now, several U.S. senators have written a letter, putting this port on notice.

Germany is, of course, not taking this lightly. Mecklenburg-Vorpommern Premier Manuela Schwesig called the letter “blackmail,” while German Foreign Minister Heiko Maas “expressed [his] surprise and displeasure” to U.S. Secretary of State Mike Pompeo. Niels Annen, a member of the German Foreign Office, said the letter was “completely outrageous.” He added: “Threatening a close friend and ally with sanctions, and using that kind of language, will not work.”

The Russian Federation has expressed its willingness to tolerate sanctions on its ships and companies to complete the Nord Stream 2 pipeline. Russian officials assess that the economic and geopolitical windfalls from the pipeline are worth the cost. They also believe that sovereign immunity and raw economic power insulate them from potential legal liability.

Russia may be willing to accept the repercussions of American sanctions, but what about Germany? The fact that Germany has been pushing to get Nord Stream 2 completed despite the U.S.’s vocal opposition and the security concerns of its East European neighbors—some of whom are both EU and nato allies—implies that it is.

Why are America and Germany having this fight in the first place? Both are nato allies, and the U.S. is the EU’s largest trade partner. Wouldn’t Germany prefer to do business with a wealthy ally and democracy rather than a bellicose dictatorship already proven to be unafraid to redraw the borders of Europe (as Russia did with Georgia in 2008 and with Ukraine in 2014)?

Nord Stream 2 binds Russia and Germany together in a way that undermines nato. In fact, though Russia and Germany will not say so, this pipeline project is clearly intended to wreck nato. Why would these nations want to do that? … Many elite Germans feel their nation has now gotten all it can from the U.S. and they are ready to move on. Some powerful Germans today are thinking more and more about the Holy Roman Empire, and they want modern Germany to assume more power of its own in the spirit of that empire. They want to establish Europe as a mighty, German-led superpower. These Germans know that nato is an obstacle to their goal.

Germany may not seem to be the threatening beast described by Mr. Flurry above. However, he based his assessment by relying on a timeless source that shows us where this German-Russian cooperation is leading: the Holy Bible. Isaiah 10:5-11 describe Assyria, the ancient ancestors of the Germans, as an instrument of God’s wrath against Israel, His chosen nation, for their sins against Him. The U.S. is one of the modern-day descendants of ancient Israel. (For detailed proof, please read The United States and Britain in Prophecy, by Herbert W. Armstrong.)

The Nord Stream 2 pipeline exposes Germany’s hostility to the U.S. and its willingness to work with an American enemy.

Germany’s outreach to Russia and snubbing of the United States is of massive geopolitical consequence and will soon affect everybody on Earth. To learn more about the Nord Stream 2 pipeline’s place in this, please read “Germany and Russia’s Secret War Against America.”