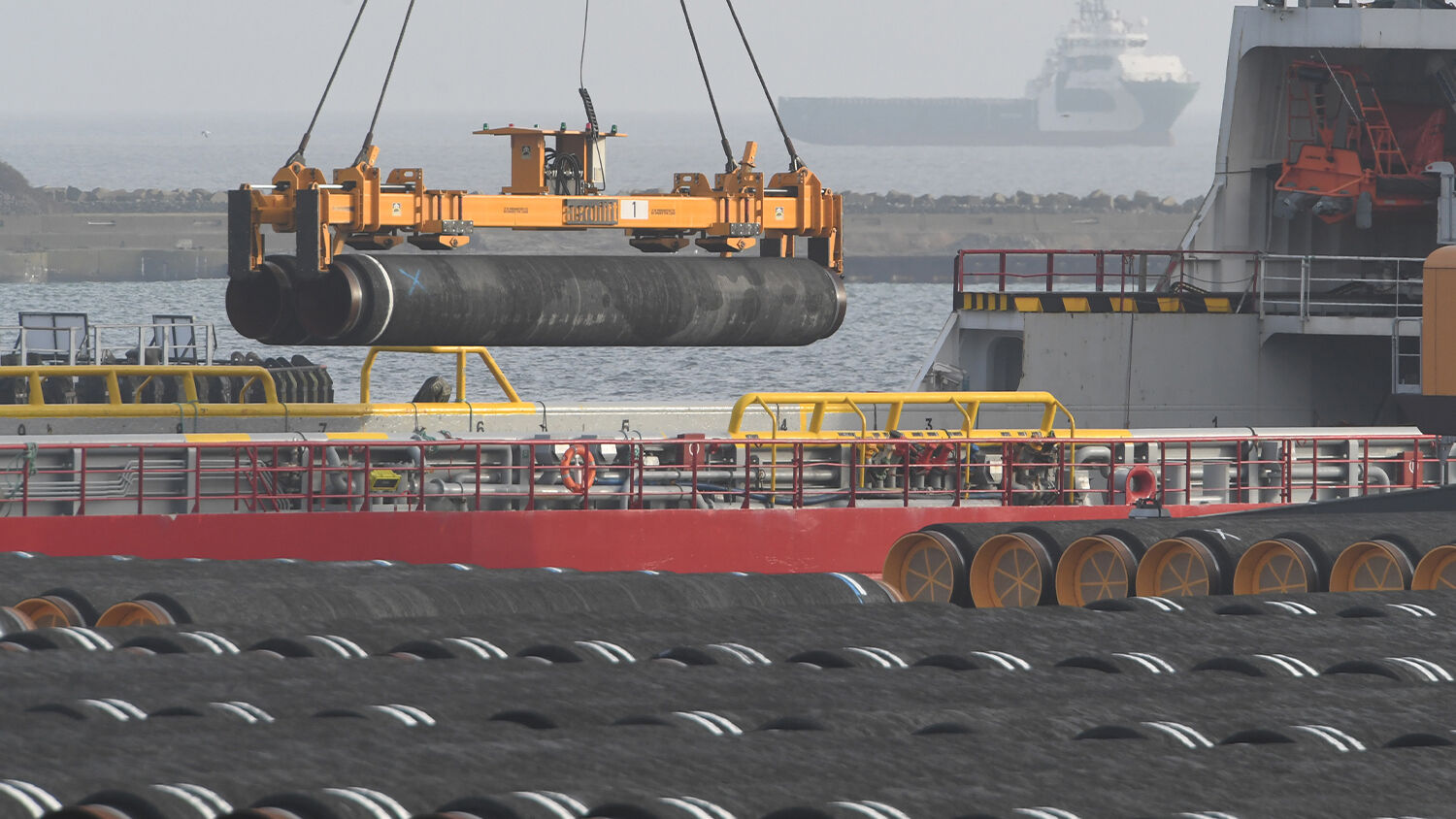 Pipes for the Nord Stream 2 Baltic Sea gas pipeline being loaded onto a ship at the port of Mukran.
Stefan Sauer/picture alliance via Getty Images

With the stroke of a pen, United States President Donald Trump shut down the most significant energy project in the world.

On Friday, Mr. Trump signed into law the 2020 National Defense Authorization Act. As soon as he did so, Allseas, the Swiss-Dutch engineering company laying pipe for the Russian-German Nord Stream 2 gas line project, stopped work.

It’s an impressive demonstration of the massive economic power America only rarely uses.

The law placed sanctions on any company involved in laying the pipes under the Baltic Sea between Germany and Russia. Had Allseas continued work, its office in Texas would have been seized—as would all of its specialized ships if they entered U.S. waters.

These sanctions have wide-ranging implications. The EU Observer wrote on Saturday (emphasis added throughout):

Nord Stream 2 has long divided the EU as well as the West more broadly on strategic grounds. It would enable Russia to pump almost all of its EU gas exports via Germany, allowing the Kremlin to cut off Poland, the Baltic states or Ukraine for political reasons.

It was seen as a betrayal in Eastern Europe, where it has been compared to the Molotov-Ribbentrop pact, a Nazi-Soviet-era deal to carve up the region, and it was mistrusted by Nordic countries.

Whether Mr. Trump has shut down the deal for good remains to be seen. Only around 100 miles of the 750-mile pipeline remains to be laid. The deeper, harder portions are already completed. But specialist pipeline ships are still rare. Russia has one that it says could do the job, but it could not make it to the Baltic for another couple of months.

Even if the project is only delayed, it still is a big boost for Poland. Poland is working on a new pipeline of its own—connecting it to Norway and its North Sea oil. Poland is also expanding its ability to import liquified natural gas, which is carried via tanker, not pipeline. Once these projects are complete, by the end of 2022, Poland will no longer need Russia’s gas. There is now an expiration date on Russia’s ability to blackmail Poland with energy. It will be touch-and-go whether Russia can get Nord Stream 2 operational before that expiration date passes. But President Trump has given Poland a fighting chance.

This is just the latest example of America’s ability to change the world with the stroke of a pen.

Shortly after coming into office, Mr. Trump put sanctions not only on Iran, but also on any company, based anywhere in the world, doing business with Iran (with some exceptions). America’s economy has such clout that even firms with nothing to do with the U.S. stopped trading with Iran. Even some Chinese state-owned oil companies have shied away from doing business with Iran, out of fear of economic retribution from the U.S.

Europe has tried to get around these sanctions, setting up new systems to bypass the dollar or the U.S. financial system. It has failed. No major company is willing to risk getting shut out of the U.S. for the sake of Iran.

At the same time, these aggressive sanctions have exposed a new world order.

During the Cold War, America, Britain and Western Europe were against Russia. But now, when it comes to Nord Stream, Iran or trade policy in general, it is America and Britain on one side and Western Europe and Russia on the other.

At the heart of this switch is Germany. It now leads Europe—and it led Europe into this relationship with Russian President Vladimir Putin. Much of Europe, including France, was at one point against Nord Stream 2. But Germany got its way.

We’ve now reached the situation where one half of nato is threatening sanctions on the other. And Germany is helping Russia expand its power in Central and Eastern Europe—rather than trying to keep Russia out.

Trumpet editor in chief Gerald Flurry described this split, and the pipeline’s role in it, in his article “Germany and Russia’s Secret War Against America.” In that article, he showed how the Bible describes the growing anger toward America that is building in Germany. Jeremiah 1:13 describes “a seething pot; and the face thereof is toward the north.”

“This symbolic language is describing modern Germany,” wrote Mr. Flurry. “Beneath the surface, that nation is full of simmering dissatisfaction with the current world order. Germans are angry at the U.S., and especially furious with President Trump. The imperialistic ambition that prompted Germany to start both world wars is alive and well. It is ‘seething’!”

It is becoming increasingly clear that the U.S. and Germany are no longer on the same side. They are allies on paper only.

And this trade war also points Germany to a powerful way to get back at the U.S.

The dollar, America’s banks and the other parts of the American financial system sit at the foundation of global trade. This gives the U.S. huge power—power that no other previous president has wielded in quite the way Mr. Trump is.

At the same time, America’s financial system is fragile. The nation is borrowing over $1 trillion a year. It has debt it can never realistically expect to pay back. The world’s economy rests on this flawed foundation. Sooner or later it will collapse.

Once that happens, the global economy will need a new foundation. Whomever supplies that foundation will have enormous power.

In Revelation 17, the Bible describes a “beast,” or empire, that “was, and is not” (verse 8). Periodically in history, this beast rises on the world scene and then disappears, only to rise up again and surprise the world. This empire is led by a women (verse 1)—prophetic symbolism for a church.

The description it gives matches the European powers, led by the Catholic Church, that have continually risen and fallen. And it tells us that it will rise one more time.

Revelation 18 tells us this power will have massive economic power. The “merchants of the earth are waxed rich” through her (verse 3). These merchants “were the great men of the earth” (verse 23). The empire is filled with “great riches.” This German-led European power will become the new center of the global economy.

The Bible says it will wield this economic power far more ruthlessly than America has ever done.

America, Britain and the Jewish state in the Middle East are the descendants of ancient Israel (for proof, read our free book The United States and Britain in Prophecy, by Herbert W. Armstrong). The Bible says these nations will be the target of this new economic and military power.

In Deuteronomy 28:52, God tells Israel that its enemies will “besiege thee in all thy gates”—cut its economy off from the outside world—the most extreme form of a trade war. Ezekiel 4-5 describe a siege of Jerusalem along with the other tribes of Israel. This siege, as outlined in Ezekiel 4, did not happen during Ezekiel’s time. In fact, most of ancient Israel had already been conquered, deported and enslaved by the time the prophet wrote this. It is prophecy, not history.

Germany will use its control of the global economy, not just to target one or two companies, but to cut off food, oil, energy—all trade—from the nations of Israel.

When it comes to the Nord Stream 2 pipeline, Germany and America are already on opposites sides. They are already in a trade war. Germany is laying the groundwork for a future clash. Europe has signed landmark trade deals with Canada and Japan. It is working on another with Latin America. These deals have all taken place in the last few years. Germany is creating the world’s largest free-trade zone—centered on the European Union.

The consequences of this trade war are terrible. At the same time, there is great hope in this inevitable future. This coming war is referred to time and again in the Bible. It is a key part of God’s plan and part of His great purpose.

To learn more about this coming clash and the great hope behind it, read Mr. Flurry’s article “Germany and Russia’s Secret War Against America.”