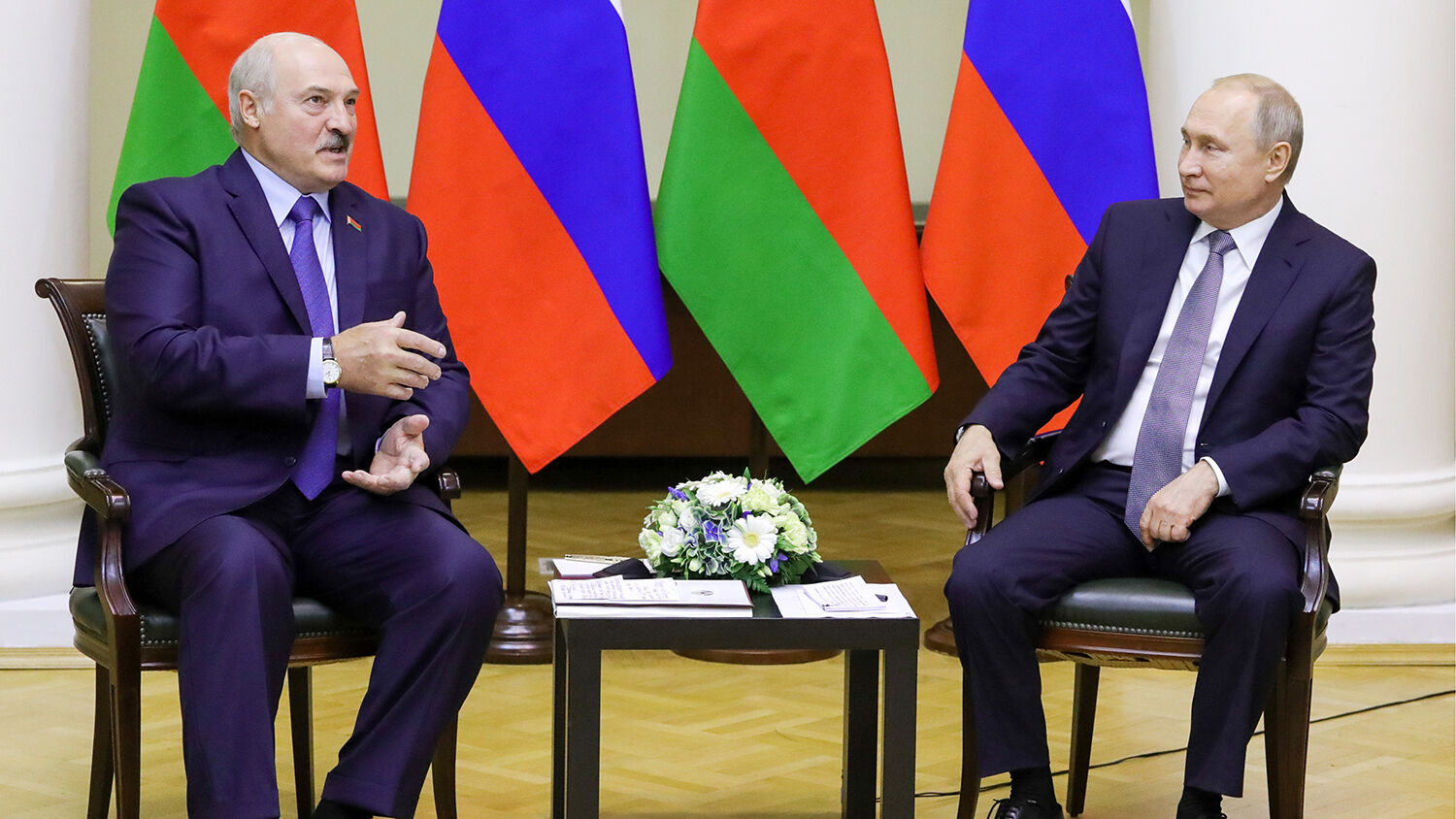 Will this enable Vladimir Putin to stay in power after his presidential term ends?

Belarus’s ambassador to Russia said on November 29 that the heads of the two nations are preparing to establish a single government as they work toward building the supranational “Union State of Russia and Belarus” by 2021.

The push is in accordance with the Union Treaty the two signed in 1999, which aims to merge Russia and its former Soviet neighbor into a two-state federation—with a single flag and military, a single currency, a common market and an integrated judiciary. Over the last two decades, implementation has lagged, but Putin and Lukashenko are eager to make it reality.

“The presidents agreed that the stated goals are ambitious,” Syamashka said, adding that the two agree that those goals “should not change.” He said 20 of the plan’s 31 disparate roadmaps for bilateral integration have now been “absolutely agreed,” and that the two sides will convene again on December 7 to finalize more of the plan’s steps. “[T]he last word will be for the presidents of the countries,” Syamashka said. “I am convinced that the tasks will be solved.”

Putin, in particular, is eager to bring Belarus under Russia’s control, for three main reasons.

Early in his presidency, Putin famously called the collapse of the Soviet Union “the greatest geopolitical catastrophe” of the 20th century. The Soviet Union included Belarus, Georgia, Ukraine and 11 other republics located in Russia’s periphery. It placed the peoples of these various countries under Russian control.

Putin looks back fondly on the era when all those countries were forged into one under the Soviet hammer. He wishes the Soviet Union had never busted apart. And one of his highest priorities as Russia’s leader has been to hammer as much of it as possible back into place.

Putin’s 2008 pounding of Georgia, which brought 20 percent of the nation back under Russian power, was part of these efforts, as was his 2014 annexation of Ukraine’s Crimean Peninsula. And Putin has been applying heat to Ukraine’s southeast for years, bringing it up to forging temperature, in possible preparation for another strike.

As for Belarus, it is already largely forged into Russia. The two militaries have close ties. Belarus is a member of the Collective Security Treaty Organization (csto) and the Eurasian Economic Union (eeu), both tools of Russian might. It is plain that in some weighty but unofficial ways, Belarus is part of Russia. But in Putin’s drive to forge the Soviet Union back together, “unofficial” may not be adequate for much longer.

Rally Around the Tricolor

Putin would also relish giving Russians a reason to celebrate his leadership once again.

The Russian Center for Social and Labor Rights has chronicled a record number of demonstrations in the country during 2019: almost 1,440, with a month still to go. Protests in July and August were the biggest Russia has experienced since 2013 and prompted a record number of arrests. Public trust in Putin has fallen to 31.7 percent—the lowest level since 2006. And the percentage of Russians who say a major leadership change is needed soared last month to 59 percent.

It is not hard to see why the people of Russia are increasingly disenchanted with Putin. Living standards are plummeting, poverty rates are climbing, and a government move last year raised the retirement age to a figure higher than the average man’s life expectancy. After learning of the change, one Russian citizen tweeted: “I remind you: 43 percent of males in Russia will not live until their retirement age!”

The Russians are suffering, and their misery is darkening their view of Putin. But history teaches that the Russian people are inclined to disregard their individual misery and personal complaints with the government if they see the motherland behaving powerfully abroad.

In 2006 and 2007, Putin’s popularity and trust ratings were disturbingly low. But after Russia invaded Georgia in 2008, those numbers surged. Over the next few years, the numbers slowly fell. But again, in 2014, after Putin’s annexation of Crimea, they soared into the stratosphere. His trust rating peaked at 71 percent—more than double the current number.

Putin understands this recent history well. He understands that his primary achievement in the eyes of average Russians has been “making Russia great again” with bold foreign-policy moves—especially those that forge former Soviet nations back under Russian power. If Russia’s trust in him keeps declining, he may determine that the best means of reversing the trend is by bringing Belarus officially under Russian control.

The Russian Constitution stipulates that presidents may serve no more than two consecutive terms. This means Putin will theoretically be obligated to step down when his current term ends in 2024.

But Putin, like the majority of authoritarian leaders throughout the ages, relishes his power and seeks to prolong it. This is partly because going into retirement would be risky, since he could never be sure of any personal security promises his successor may make to him. It is also partly because, in the words of author Richard Risch, “Tyrants are willing to commit to anything … including mass murder, to maintain their domination.”

And for Putin, the constitutional limitation is an obstacle only on paper.

He already sidestepped it once back in 2008. After completing two consecutive four-year presidential terms, Putin handed the presidency over to his subservient protégé, Dmitry Medvedev, and stepped into the office of prime minister. During this time, Putin continued functioning as the ruler of Russia in all but official title, basically using Medvedev as a puppet. Also in 2008, the government extended the presidential term to six years, effective upon the next election. In 2012, Putin returned to the presidency with a newly extended six-year presidential term. His rule over Russia was official once again, and he won a second six-year term last year.

When his current term ends in 2024, there is a chance Putin could orchestrate another rendition of this “castling move” with Medvedev or some other trusted protégé. There is also a chance that Putin will amend the Constitution so that he can stay in power after 2024.

But both moves carry considerable political risk. And with Belarus, there is another safer and perhaps more desirable option available for Putin.

The treaty that Russia and Belarus signed in 1999 stipulates that the supranational “Union State of Russia and Belarus” is to be governed by a Supreme State Council, with the presidents of the two countries taking turns as head “unless they agree otherwise.” Since 2000, Lukashenko has led the Union, but both nations have thus far prevented that office from holding any actual power or relevance.

If Putin took the reins of the Union State of Russia and Belarus after the supranational state is fully formed, he could imbue the entity with vast power. By taking charge of a greatly strengthened Supreme State Council, Putin could potentially become more powerful than whomever may succeed him as Russian president—and all without having to rewrite or sidestep the Constitution.

The Scriptures Foretell of a Russian ‘Prince’

The Trumpet vigilantly watches Vladimir Putin and his grasp on power because of what Bible prophecy says about his part in end-time events. Around the year a.d. 90, the Apostle John was inspired to write a sobering prophecy: “And the number of the army of the horsemen were two hundred thousand thousand: and I heard the number of them” (Revelation 9:16). This is a military force of 200 million soldiers, which is far larger than any force ever assembled in human history.

The Scriptures provide several important details about this massive power. Revelation 16:12 labels the force as “the kings of the east,” showing it to be a group of mainly Asian countries. A prophecy in Ezekiel 38:2 mentions a “prince of Rosh, Meshech, and Tubal” (Young’s Literal Translation). Meshech and Tubal are ancient names designating the modern Russian cities of Moscow and Tobolsk. And Rosh is a variation of an ancient name for Russia. Several Bible commentaries, such as the Jamieson, Fausset and Brown Commentary, understand this.

In the September 2014 Trumpet, editor in chief Gerald Flurry identified who exactly this powerful Russian “prince” is:

Some aspects of this “prince of Rosh” prophecy have already been fulfilled, and Mr. Flurry believes Putin will stay in power to fulfill even more of it. So whether Putin maintains power by becoming leader of a Russia-Belarus union, amends or circumnavigates Russia’s Constitution, or if the world falls into conflict before the question becomes urgent, the Trumpet believes Putin will be the primary power over Russia during the most violent era in mankind’s history.

But it is not all bad news.

In his booklet The Prophesied ‘Prince of Russia,’ Mr. Flurry writes that, though global calamity is fast approaching, there is a deep hope at the heart of these prophecies about Russia. He writes that the fact Putin is now in charge proves that the most joyous event in mankind’s history is near: “Mr. Putin’s warfare is going to lead directly into the Second Coming of Christ. … Vladimir Putin is a sign, literally a sign, that Jesus Christ is about to return!” he writes. “This is one of the most inspiring messages in the Bible.”

To comprehend these Bible passages and the danger and the hope that is laced into them, order your free copy of Mr. Flurry’s booklet The Prophesied ‘Prince of Russia.’