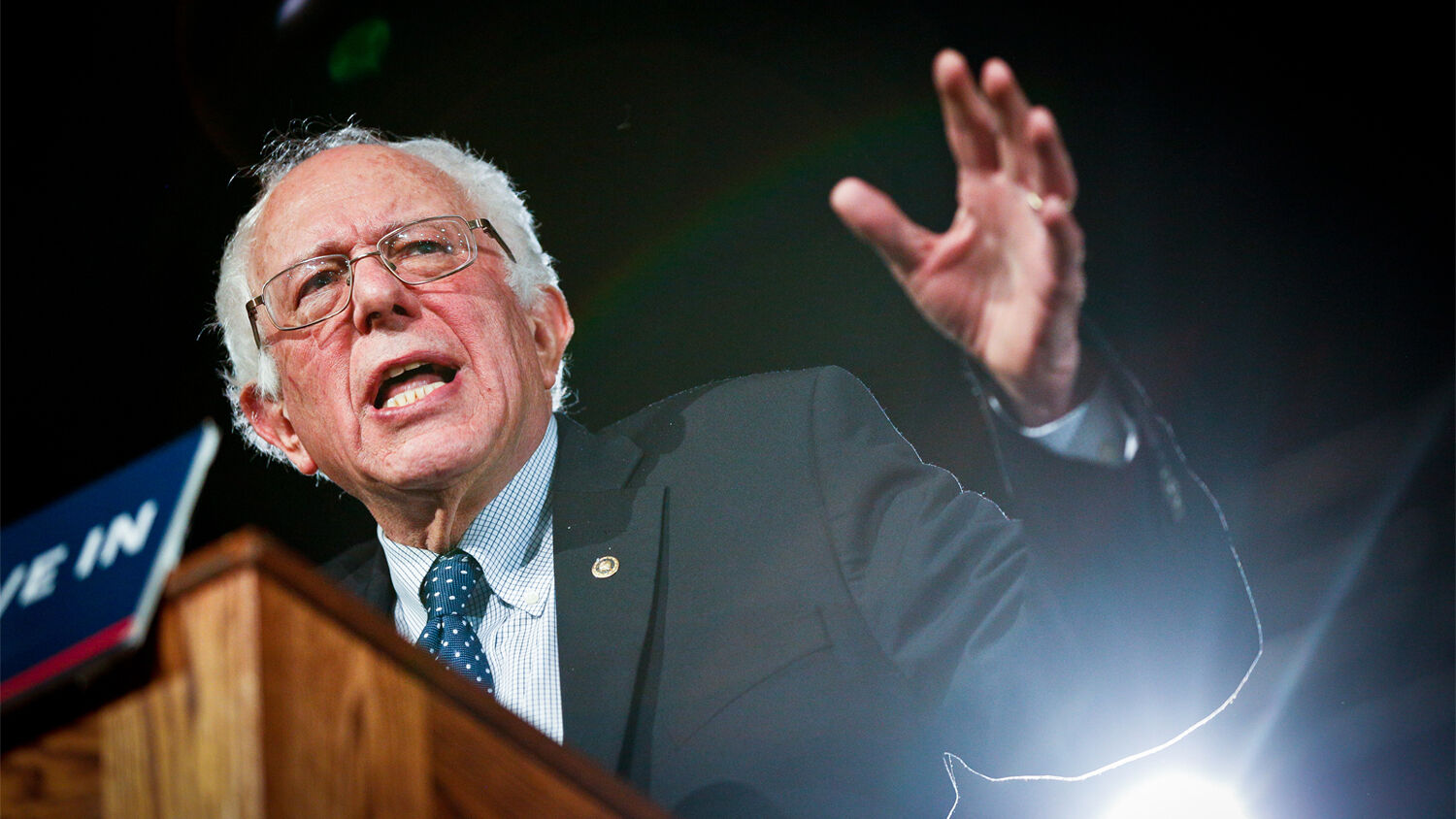 He may have lost the nomination, but Senator Sanders’s radical socialist movement has seized the soul of the Democratic Party.

Former First Lady Michelle Obama helped kick off the Democratic National Convention on August 17 with an emotional appeal to “vote for Joe Biden like our lives depend on it.” Yet while Michelle Obama may have stolen the show on the opening night of the convention, it was Sen. Bernie Sanders who delivered the most politically substantive speech. Even though Senator Sanders lost the Democratic nomination, his speech highlights the fact that the Democratic Party has almost whole-heartedly embraced his socialist agenda.

“This election is the most important in the modern history of this country,” he said. “Let me take this opportunity to say a word to the millions who supported my campaign this year and in 2016. … Our campaign ended several months ago, but our movement continues and is getting stronger every day. Many of the ideas we fought for, that just a few years ago were considered ‘radical,’ are now mainstream. But let us be clear. If Donald Trump is reelected, all the progress we have made will be in jeopardy.”

Senator Sanders then recounted how Democratic Party presidential nominee Joe Biden “supports raising the minimum wage to $15 an hour.” He recounted how Mr. Biden will “fight the threat of climate change by transitioning us to 100 percent clean electricity over the next 15 years,” how he will “greatly expand health care and cut the cost of prescription drugs,” and how he will “reform our broken criminal justice system” by ending “private prisons and detention centers, cash bail, and the school-to-prison pipeline.”

Yet for Mr. Biden to accomplish all the things Senator Sanders says he will accomplish, the U.S. government would have to completely nationalize the healthcare industry, the energy industry, and the prison system. This would be the largest expansion of government in U.S. history, transforming America into a Venezuela-style socialist state. Yet the Democratic Party seems perfectly OK with Senator Sanders’s socialist proposals.

The Biden campaign gave Senator Sanders a prominent speaking slot at the Democratic National Convention to showcase just how far left the former vice president has moved since winning the primaries. Senator Sanders is a self-identified socialist who has had quite a few positive things to say about Venezuela, Cuba and the Soviet Union over the years. And now the Biden campaign has pretty much adopted all the major planks of his socialist platform—except for “Medicare for All” and the Green New Deal.

On August 17, the Wall Street Journal noted that the “Biden-Sanders manifesto is the most radical policy document of either major party in our lifetimes. It leaps to the left of the Obama administration on nearly every policy area, from education to taxes to climate change. … The socialists of the Cold War era saw inequality as largely economic. The new left sees every inequity as a result of racism, sexism or other institutional bias. Mr. Sanders at age 78 may be having his last campaign hurrah, but he is serving as the transition figure to the new socialist generation who will redistribute income and wealth, regulate and direct business, and micromanage American social arrangements based on ethnic and gender categories.”

President Trump called Mr. Biden a “Trojan horse for socialism” and a “puppet of left wing extremists trying to erase our borders, eliminate our police, indoctrinate our children, vilify our heroes, take away our energy.”

Yet anyone who actually believes Joe Biden is a pragmatic moderate is being quite a bit more naive than the ancient Trojans. It should be easy to see that Senator Sanders is endorsing Mr. Biden because socialist revolutionaries have seized control of the Democratic Party. Some of these revolutionaries—like Barack Obama, Kamala Harris and Elizabeth Warren—pretend they are pragmatic moderates, even though their voting record exposes them as being just as radical as Senator Sanders. But at the grassroots level, an increasing number of activists are openly admitting that they are Marxists. Antifa is an overtly Communist group and Black Lives Matter co-founder Patrisse Cullors openly admits that she and her fellow organizers are “trained Marxists.” And earlier this year undercover investigators working for Project Veritas have uncovered a surprising number of militant Communists working on the payroll of the Bernie Sanders presidential campaign.

One field organizer for Sanders, Mason Baird, said in a video recorded secretly by Project Veritas: “We would need a federal government and labor union movement that is working together to strip power away from capitalists and preferably directing violence toward property …. A militant labor movement is kind of our last—our last real—chance before we try other means. … After we abolish landlords, we don’t have to kill them, that’s my feeling, I think it’s damaging to the soul, but there were plenty of excesses [during the 1917 Bolshevik Revolution] I would hope to avoid. … I’m not excited about the prospect of armed struggle.”

This man is not talking about political strategy or which “battleground” states are key for his candidate to win the most votes in. He is talking about literal battlegrounds, and he was not the only person that Project Veritas caught talking about violent revolution. America’s current system has to be torn down, they say. If you can do it without large-scale killing, great; but if you can’t, you can always resort to your backup plan and kill millions of men, women and children. That is how radical some activists have become in recent years!

The late Herbert W. Armstrong explained in his book The United States and Britain in Prophecy that the peoples who settled the U.S. and Britain descended from the ancient Israelites. God made an unconditional promise to Abraham to give his descendants great material wealth. God kept this promise by giving the U.S. and Britain nearly three fourths of the world’s usable resources and wealth during the peak of their power. But God did not promise to keep blessing these nations if they turned away from Him.

A prophecy in Leviticus 26 states that if the descendants of Israel came to despise God’s statutes, He would strip away their blessings and allow their cities to be laid waste.

In a January 1949 Plain Truth article, “The Plain Truth About Communism,” Mr. Armstrong specified that communism is a tool of the devil to blot out America’s blessings. In that article, he wrote:

The real goal of the Communist plotters is the violent overthrow of the United States and the British Empire. Why? We are the real “capitalist” nations. We possess nearly three-fourths of all the world’s “capital”—its developed and usable resources and wealth. … The plain truth, known by so few, is that we possess greater wealth and national resources than any other nation ever did, because Almighty God gave us this wealth in fulfillment of His birthright promise to Abraham, Isaac and Jacob! And communism is the devil’s effort, through his demon-inspired human tools, to take from us this greatest national and economic blessing God ever conferred on any people! And since this blessing from God is the world’s “capital” atheistic communism shouts, “Down with capitalism.”

Mr. Armstrong based his forecast on Bible prophecy. Hosea 7:8-9 predicts that the modern-day descendants of Israel would mix themselves with foreigners and their foreign ideologies. The far-left ideas put forward by the Democratic Party today are not based on traditional American culture, which is largely based on the Bible. They are ideas that were brought to America from Chinese, German and Russian universities. For decades, these anti-Bible ideologies have subversively “devoured” America’s strength while the average citizen “knoweth it not.” Yet soon, the atheistic ideals of Communism will ignite a violent revolution.

A prophecy from Isaiah sheds further detail on how this violent revolution will start.

“Ah sinful nation, a people laden with iniquity, a seed of evildoers, children that are corrupters: they have forsaken the Lord, they have provoked the Holy One of Israel unto anger, they are gone away backward. Why should ye be stricken any more? ye will revolt more and more: the whole head is sick, and the whole heart faint. From the sole of the foot even unto the head there is no soundness in it; but wounds, and bruises, and putrifying sores: they have not been closed, neither bound up, neither mollified with ointment. Your country is desolate, your cities are burned with fire: your land, strangers devour it in your presence, and it is desolate, as overthrown by strangers” (Isaiah 1:4-7). This passage describes cause and effect. The people are “laden with iniquity,” therefore the “whole head is sick.” The government is corrupt and the nation is faint. As a consequence, the people “revolt more and more.” This revolt intensifies until strangers burn down cities and tear down our system of government.

Today, socialism is gathering strength. What people don’t understand about “democratic socialism” is that its purpose is the same as any other form of socialism: to overthrow constitutional government, by violence if necessary. Bible prophecy shows that America’s great blessings will indeed be taken away—not just because socialists “outmaneuvered” conservatives— but because the American people have turned away from God.

To learn more about this deadly attack, please read “An Attack On Law,” by editor in chief Gerald Flurry. It explains the root cause of the spiritual degeneration of American society, and how this degeneration has opened the door for radical ideologies like communism. The Democratic Party’s shift to the far left makes perfect sense once you understand the hidden cause of society’s deadly decline.