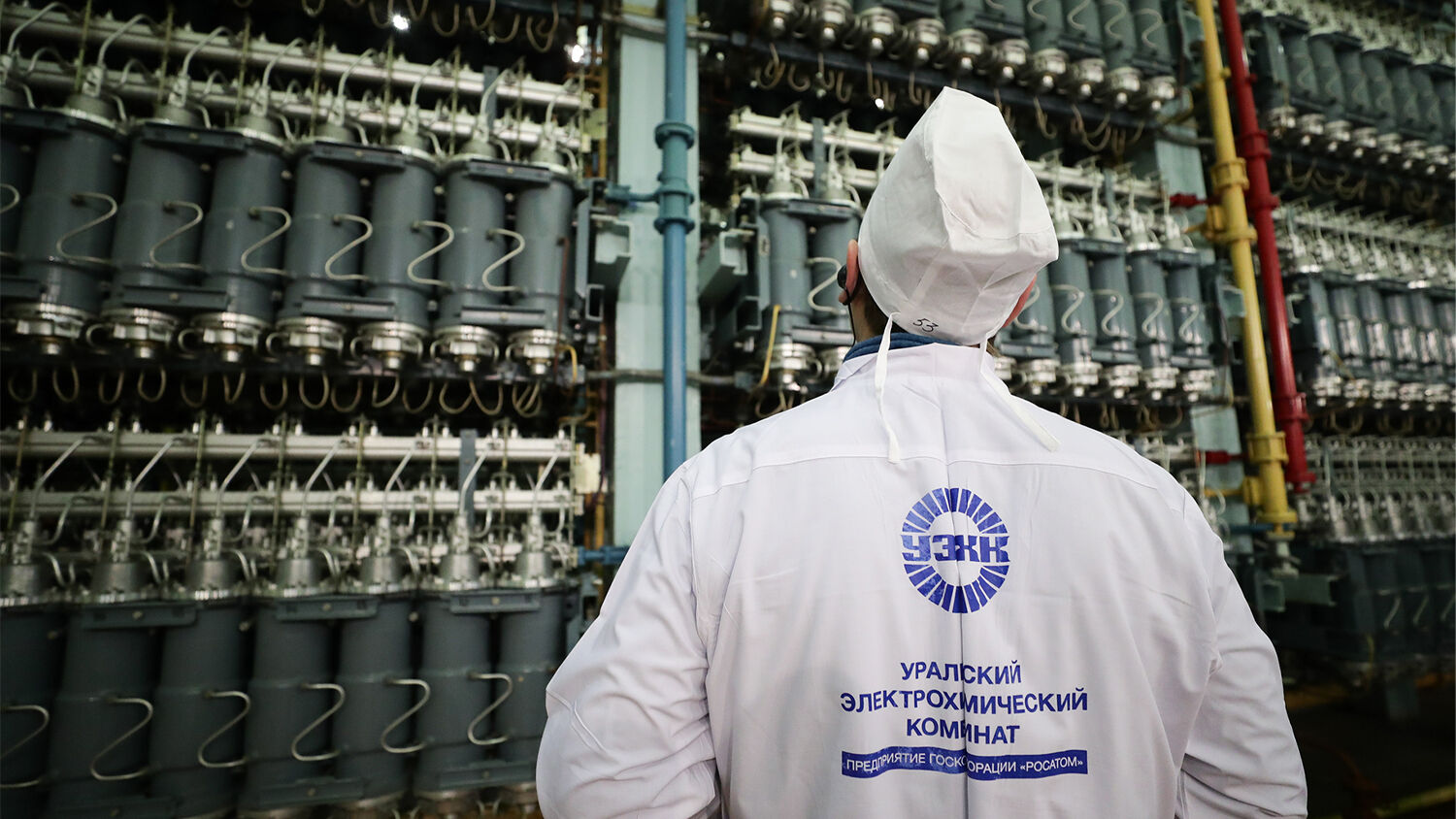 Why Vladimir Putin wants to control the world’s uranium

Most Americans do not understand how important uranium is to their national security. Nuclear power plants generate about 20 percent of the nation’s electricity. That means that America’s 98 nuclear reactors must be fed over 40 million pounds of uranium each year, so they can produce 809 billion kilowatts of electricity. The United States mining industry extracts less than 1 percent of the nation’s uranium needs each year.

To make up the difference, U.S. power plants import about 40 million pounds of uranium from foreign nations. America currently buys about 40 percent of the uranium oxide it needs to keep its reactors running from Russia and other former Soviet states.

“There’s just one potential problem for American nuclear power: Virtually all of the fuel needed to operate reactors is imported,” Maxx Chatsko wrote in a July 21 Motley Fool article. “The United States imported an estimated 91 percent of the fuel consumed in nuclear power plants in 2019, although the reliance on foreign materials is likely to increase. That’s because the country produced just 174,000 pounds of uranium concentrate last year—half the previous all-time low set in 1949—but requires over 43 million pounds to keep its fleet running each year. Should investors be concerned by America’s lackluster uranium production?”

America’s overreliance on uranium from Russia and other former Soviet states may be lost on the average American citizen, but it is something that Russian President Vladimir Putin thinks about a lot. In 2018, the Russian legislature passed a bill allowing Russian President Vladimir Putin to cut off nuclear fuel supplies to the U.S. anytime he sees fit. This bill gives the Kremlin the ability to blackmail the U.S. with a uranium embargo in a future diplomatic standoff.

The U.S. has about 389 million pounds of readily-extractable uranium reserves on hand, and probably several times that amount in undeveloped reserves. That means the nation has enough readily-extractable uranium to power all its nuclear reactors for about a decade. Yet the U.S. is not developing new reserves, because energy companies find it cheaper to import from former Soviet states. This is not a coincidence!

Russia has about 8 percent of the world’s uranium reserves, more than any nation except Australia, Canada and Kazakhstan. And Putin has a strategy to get control of the uranium in many other nations. In 2013, Russia’s state-owned nuclear energy corporation (Rosatom) purchased controlling stakes in the Canada-based company Uranium One, which has mines in Australia, Canada, Kazakhstan, South Africa and the United States.

This purchase gives Putin the power to increase uranium production in the former Soviet states while decreasing it in the U.S. and Canada.

“[T]he bottom line is this: Rather than produce their uranium, the Russians may have cleverly chosen to restrict the already limited production on their newly acquired Uranium One licenses in Wyoming in order to first create a shortfall,” wrote Ned Mamula in “Russia’s Uranium Gambit: The Real Uranium One Scandal.” “They then later could replace that U.S. shortfall with cheaper uranium imports from Kazakhstan at prices that undercut the U.S. market—easy to do since the Kazakhs are not under the same regulations, restrictions, and rules that govern production in the U.S. Therefore, it should appear to even the casual observer that the Uranium One buyout was a strategic success for armz/Rosatom ….”

With Canada and the U.S. mining less and less uranium, American electrical companies may have to rely on Moscow for years to come. And the saddest part of this situation is that U.S. policymakers were not caught off guard regarding Putin’s uranium strategy. The Federal Bureau of Investigation was aware of Putin’s intentions even before Rosatom purchased controlling stakes in Uranium One.

In his book Fallout: Nuclear Bribes, Russian Spies, and the Washington Lies That Enriched the Clinton and Biden Dynasties, investigative journalist John Solomon recounts how the fbi had undercover agents inside Rosatom informing the Obama administration about Putin’s plans to monopolize uranium production. Since Uranium One controlled roughly 20 percent of U.S. uranium production capacity, the Obama administration could have blocked Russia’s purchase by declaring it a national security threat. But Secretary of State Hillary Clinton and the heads of eight other government agencies signed off on the purchase.

Seven years later, the U.S. is more dependent on Russia for its uranium needs than ever. Granted, a sudden Rosatom cutoff of uranium supplies to the U.S. would not make it impossible for U.S. energy companies to get uranium. The nation has enough readily extractable reserves to keep it supplied for several years. But after years of reliance on cheap Khazak uranium, such a cutoff would cause a dramatic spike in the price of electricity. And if such a price spike were timed to coincide with other economic problems in the nation, it could be a catalyst for civil unrest.

A prophecy in the book of Ezekiel reveals that foreign nations will economically besiege the U.S. and Britain. “For I have laid upon thee the years of their iniquity, according to the number of the days, three hundred and ninety days: so shalt thou bear the iniquity of the house of Israel. … Moreover he said unto me, Son of man, behold, I will break the staff of bread in Jerusalem: and they shall eat bread by weight, and with care; and they shall drink water by measure, and with astonishment” (Ezekiel 4:5, 16).

God is very detailed in this verse. He is prophesying an economic siege that lasts 390 days and is so intense that bread and water are rationed. It would take a lot of power to cripple the U.S. economy to such an extent. But if it suddenly lost access to Russian uranium or even Chinese rare earth minerals, its economy would suffer a blow.

“The U.S. and other Israelite nations are surrounded or besieged by fierce and often unfair competition,” Trumpet editor in chief Gerald Flurry writes in his book Ezekiel—The End-Time Prophet. “Prophecy indicates that the German-led European Union will soon join forces with Russia, China and Japan to shut the U.S. out of more and more markets (see Isaiah 23). As the U.S. and Britain become less and less competitive worldwide, unemployment will steadily increase. … The United States and Britain are going to be left out in the cold as two gigantic trade blocs, Europe and Asia, mesh together and begin calling the shots in world commerce. These nations of Israel are going to be literally besieged—economically frozen out of world trade! As that happens, domestic rioting and violence will become much more prevalent. Already in America today, instances of rioting and burning are occurring more regularly, often associated with racial hatred.”

The fact that America was governed for eight years by a presidential administration willing to allow Russia to purchase controlling stakes in a company so vital to national security was a curse from God (Ezekiel 5:8-9). And if people do not repent and turn back to God, these types of curses will intensify until the nation is laid desolate. Yet the silver lining is that this desolation will eventually cause people to repent and turn back to God.

Ezekiel will have lived in vain if people do not hear his message today. The United States, Britain and many other English-speaking nations are heading for the worst crisis ever known. Current events like the Uranium One scandal prove this statement true.

To learn how the Prophet Ezekiel reveals God’s master plan to usher in the wonderful Kingdom of God, request a free copy of Ezekiel—The End-Time Prophet, by Gerald Flurry.