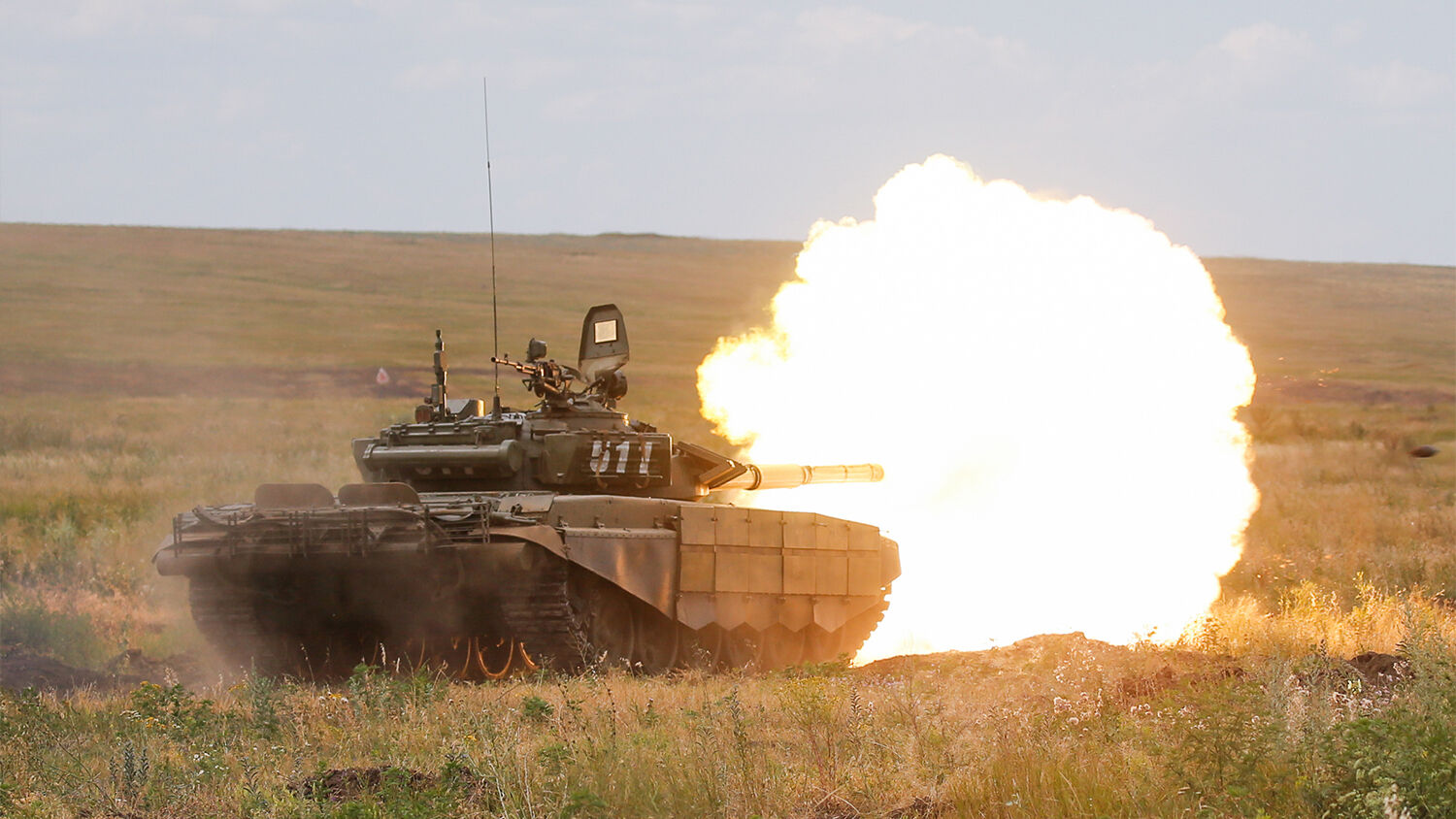 Battle tank of the 150th Motor Rifle Division of the Russian Southern Military District takes part in the final stage of an operational readiness check at the Kadamovsky range.
Valery Matytsin\TASS via Getty Images

How will the people of Europe respond to Vladimir Putin’s increasingly militaristic and dictatorial direction?

In spite of a collapse of oil and gas revenues and a deepening economic recession, reports from the Russian government published on July 14 say the nation has once again boosted security spending to record levels.

The Finance Ministry published a preliminary estimate for the first half of 2020 concluding that Russia’s spending on national defense reached the equivalent of $22.4 billion. This marks an increase of 10 percent, or $2.1 billion, over the same six-month period last year. In nominal terms, this smashed all previous records. Funds spent directly on armed forces increased by the equivalent of $2.1 billion, or 14 percent, to nearly $17 billion. And spending on nuclear weapons skyrocketed by 36 percent to more than $377 million.

Development of new weaponry grew by some 10 percent to $2.3 billion worth. And expenditures for a state program labeled “Development of the military-industrial complex” nearly tripled, rising from the equivalent of $18 million in the first half of 2019 to more than $63 million for the same time this year.

Three key takeaways are evident from these spending boosts: Increased spending in law enforcement indicates that President Vladimir Putin’s concerns about internal destabilization are growing and that he is taking proactive measures against any threat to his hold on power. Second, increased spending in the general military budget shows that Putin’s Russia is expecting war. Finally, the spending boosts for nuclear weapons indicate that the type of war Russia is expecting goes far beyond any kind of regional skirmishes.

Also significant is that the record spending hikes Russia made this year are no anomaly. They follow on the heels of some 15 years of what Stratfor calls “explosive growth” in the nation’s military expenditure—which usually persisted even through periods such as the present when Russia was facing serious economic difficulty.

This increasing military spending by Russia is often juxtaposed with that of the United States and framed in the context of a new Russia-America Cold War. But the most significant aspect of Russia’s mushrooming power is actually the catalytic effect it will have on European unification. Trumpet editor in chief Gerald Flurry discussed this fact as early as January 2004 when Putin’s authoritarian aims were becoming clear:

A more dictatorial Russian government is coming fast …. That power will be able to challenge Europe when nobody else can, including the U.S. … The Europeans still remember how violent Russia was in World War ii, and Russia is a close neighbor with massive piles of nuclear weapons. … The Russian election is triggering a fear that will hasten the uniting of the European Union.

As the people of Europe watch Putin’s shadow growing longer and his military power increasing, many wish to politically and militarily unite their countries. They understand that a unified European bloc could stand up to the rising Russian threat far more effectively than any individual nation. For this reason, Mr. Flurry said, fear of Putin’s Russia “will cause Germany and other European nations to want a stronger leader.”

In 2014, just after Russia invaded and annexed Ukraine’s Crimean Peninsula, Mr. Flurry reiterated the same basic forecast: “The fear you see in Europe because of events in Crimea is going to cause 10 leaders in Europe to unite in a sudden and dramatic way.”

Mr. Flurry has adhered to this forecast over the years because it is based on Bible prophecy. In his 2004 article, he quoted parts of Daniel 11. Verses 40 and 44 say that in the near future, “tidings out of the east and out of the north” will “trouble” a power called “the king of the north.”

Mr. Flurry explained that this prophecy will be fulfilled in the near future when the head of a revived Holy Roman Empire in Europe will hear troubling news about a mighty Asian axis led by Russia. At this future time, the European power will have already been on a path of violent conquest. But the “tidings” regarding Russia’s power will prompt Europeans to further unite behind a strong leader. “Throughout history,” he wrote, “Germany has often sought a strong leader” and “Bible prophecy says it will do so again—for the last time!”

In his 2014 article, Mr. Flurry pointed to related passages in the book of Daniel about this united Europe, and wrote: “Europe’s new fear of Russia is going to play a major role in hastening the fulfillment of that prophecy!”

Some early evidence has already emerged proving the accuracy of these forecasts. An April 2020 report by Stockholm International Peace Research Institute (sipri) showed that Russia’s increasing defense expenditure in 2019 lifted it back into the world’s top five spenders. The report highlights that during the same period, Germany made the largest percentage increase in defense spending of any of the world’s top 15 spenders. sipri made plain that these two surges are connected, writing: “The growth in German military spending can partly be explained by the perception of an increased threat from Russia.”

As Russia’s security spending and arms buildup accelerate, as shown by the Finance Ministry’s new report, Germans and other Europeans will be compelled to keep boosting their own defense budgets. This is all leading to a cataclysmic clash.

Mr. Flurry’s 2014 article highlighted other prophecies recorded in Ezekiel 38, Daniel 2 and 8, and Revelation, which show that the trends now underway are heading to an age of destruction that “will cause more suffering than the world has ever known!” Yet he added that these trends are closely connected to joyous news:

Is this a gloomy message? Well, it does describe a lot of suffering coming upon this world—the worst ever. … These prophecies can seem dark and dire, but the Bible tells us that they all have a positive ending.

To understand these Bible prophecies and to learn about the “positive ending” to the frightful trends that are now underway, please order your free copy of our booklet Russia and China in Prophecy. This booklet explains how to understand the Bible’s prophecies about the earthshaking geopolitical developments underway. It guides readers through the Scriptures to show what the future holds for Russia, Europe and the world. It reveals how Russia’s military might and Europe’s reaction to it will affect you personally—and shows that you can be preparing for the time when these trends explode into global chaos. This is a booklet you truly need, and the cost of your copy has already been paid. Please order your free copy of Russia and China in Prophecy.