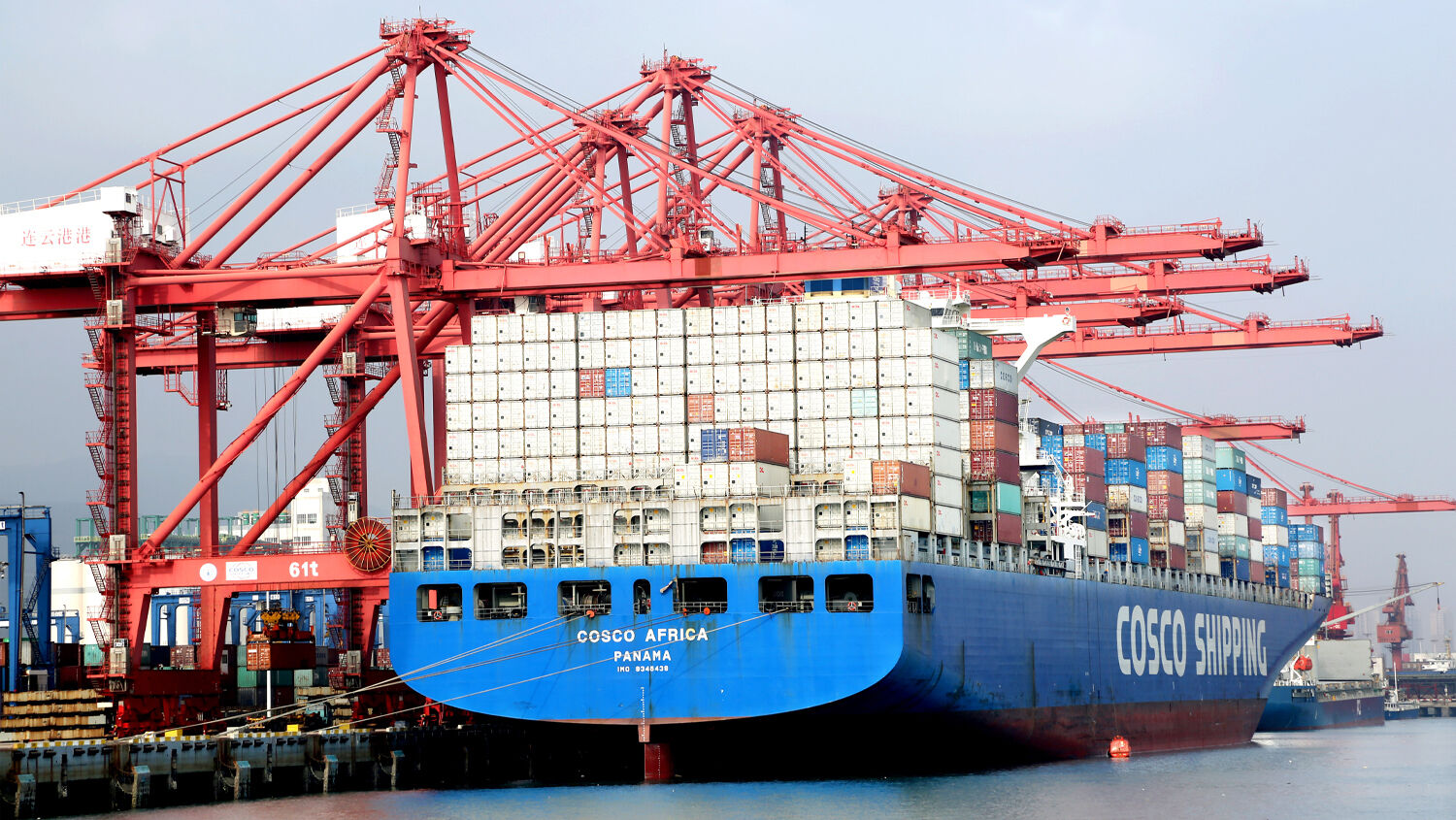 A container ship sits parked at Lianyungang port to load containers which will be shipped abroad on July 14, 2020 in Lianyungang, Jiangsu Province of China.
Wang Chun/VCG via Getty Images

Britain and America are losing trust in China. But Beijing has found a new economic partner.

When historians of the future look back at the consequences of coronavirus, they will notice that one of its biggest impacts was not on the field of health but on the composition of global trade.

As more corrupt actions of the Chinese Communist Party come to light surrounding the coronavirus outbreak, American and British sentiment toward Beijing is souring. Meanwhile, greater economic links are being forged between Asia’s biggest exporter, China, and the world’s second-largest economy, the European Union.

In recent months, public opinion in Britain has turned against China. Over all, 83 percent of Britons now distrust China, according to a recent poll cited by Financial Times. This contrasts with a separate survey published by Pew Research Center in December 2019, in which 55 percent of British respondents had an “unfavorable” view of China.

On July 14, the United Kingdom banned China’s Huawei from supplying the country with technology for its 5g mobile networks. This is a complete departure from the government’s welcoming reception of the company in January. Britain now looks set to follow the same path as the United States, where President Donald Trump issued an executive order in 2019 allowing his government to block Huawei from the American market.

The British Parliament made this decision knowing that it could incur extra costs and lengthen the time necessary to install 5g networks across the UK. It is clearly intended as a message to Beijing, and it shows how low trust of China has fallen.

London has also strengthened its stance on Hong Kong. China passed a new security law governing the island on June 30, banning “secession” from Chinese sovereignty, “subversion” of Chinese interests, “terrorism” including threats, and “collusion” with foreign nations. Proactively, the UK announced on May 29 that it would provide a settlement path for those living in its former colony, should they wish to emigrate. The offer, extended to almost 3 million people, predictably angered Beijing.

American consumers and investors are also losing trust in China. Some are considering “decoupling” from China economically. This would be a seismic shift, thought to be impossible not even a year ago.

The U.S. has also stepped up its official criticism of Chinese aggression in the South China Sea. Secretary of State Mike Pompeo issued a statement on July 13, saying: “Beijing’s claims to offshore resources across most of the South China Sea are completely unlawful, as is its campaign of bullying to control them.” He said international law and commerce face an “unprecedented threat” from Chinese aggression. As a result, the U.S. has officially rejected all of Beijing’s maritime claims beyond its 12 nautical mile exclusive economic zone. Pompeo hailed this as a “strengthening” of U.S. policy.

Britain supported the U.S. decision, announcing that one of its two aircraft carriers, along with destroyers and other support vessels, would go to the South China Sea this year or next to participate in drills with the U.S. and Japanese navies.

As leaders in Washington, D.C., and London become more vocal in condemning China, those in another important capital city have remained conspicuously silent.

“While China has come under criticism across much of the Western world, in particular in the U.S. and UK … the German government has been more cautious in its response,” wrote Politico on July 8. During a press conference, when German Chancellor Angela Merkel was asked about whether she would consider placing economic sanctions on China, she reportedly evaded the question, stating that Germany’s ties with China are “of strategic importance.”

As Politico noted, Germany’s stance on China has a “profound impact” on behavior of the entire European Union. This is especially true while Germany holds the European Council’s rotating presidency, which it took over on July 1.

Germany has refrained from criticizing China’s treatment of Hong Kong, and it’s not known for sending warships to conduct freedom of navigation exercises there. This does not mean, however, that Germany has no national interests in the area. Quite the opposite. In 2016, $117 billion worth of German goods transited through the South China Sea. Germany is the ninth-biggest source of commercial traffic in this waterway. Today, German exports to China are five times the size they were in 2005, when Chancellor Merkel took office.

“Merkel’s reluctance to call out China on the crackdown in Hong Kong may seem at odds with the popular image of her as a leader guided first and foremost by her moral compass,” wrote Politico. “Whether the issue was oppression in Tibet, the detention of Uyghurs, or the Chinese leadership’s pervasive surveillance of its own citizenry, Merkel has always put business first.”

Instead of criticizing China for its many violations of international law and human rights, Berlin—and the EU by extension—has chosen to take the route of less confrontation, putting trade relations first.

This is a trend the Trumpet watches closely. Trade relationships that have existed since the end of the Second World War are changing rapidly. But the most important reason the Trumpet watches this trend is its relevance in light of specific Bible prophecies.

Isaiah 23 describes a trade alliance called the “mart of nations.” This passage calls China by its ancient name, “Chittim.” The ancient world’s merchant capital, Tyre, refers in modern times to a prophesied European superpower. Russia will also be involved (Ezekiel 27). Our free booklet on Isaiah goes into detail about this prophecy, showing China and Germany will be two of the biggest players in this coming economic superpower. The United States and Britain, however, are not mentioned. Why?

Asian and European nations will join forces to besiege modern America and Britain economically, as Ezekiel 5 describes. This is where Germany’s appeasement of China is leading: to a radical shift in the world’s economy, which will not be in favor of the U.S. or Britain.

The outline of this prophesied alliance is coming into clearer focus. Modern trading and currency exchange systems are built largely on trust. As America and China drift further apart, watch for Europe to seize the opportunity and increase its trade with Asian nations, especially China.

Trumpet editor in chief Gerald Flurry writes in his book on Ezekiel (free upon request), “The United States and Britain are going to be left out in the cold as two gigantic trade blocs, Europe and Asia, mesh together and begin calling the shots in world commerce. These nations of Israel are going to be literally besieged—economically frozen out of world trade!”

Increasing trade activity between Europe and Asia, combined with growing American isolation, will change the world rapidly. It is leading to an economic siege, and eventually, a military attack against the U.S. and Britain.

To understand where this vital and rapidly changing part of your world is heading, read our free book Ezekiel—The End-Time Prophet.