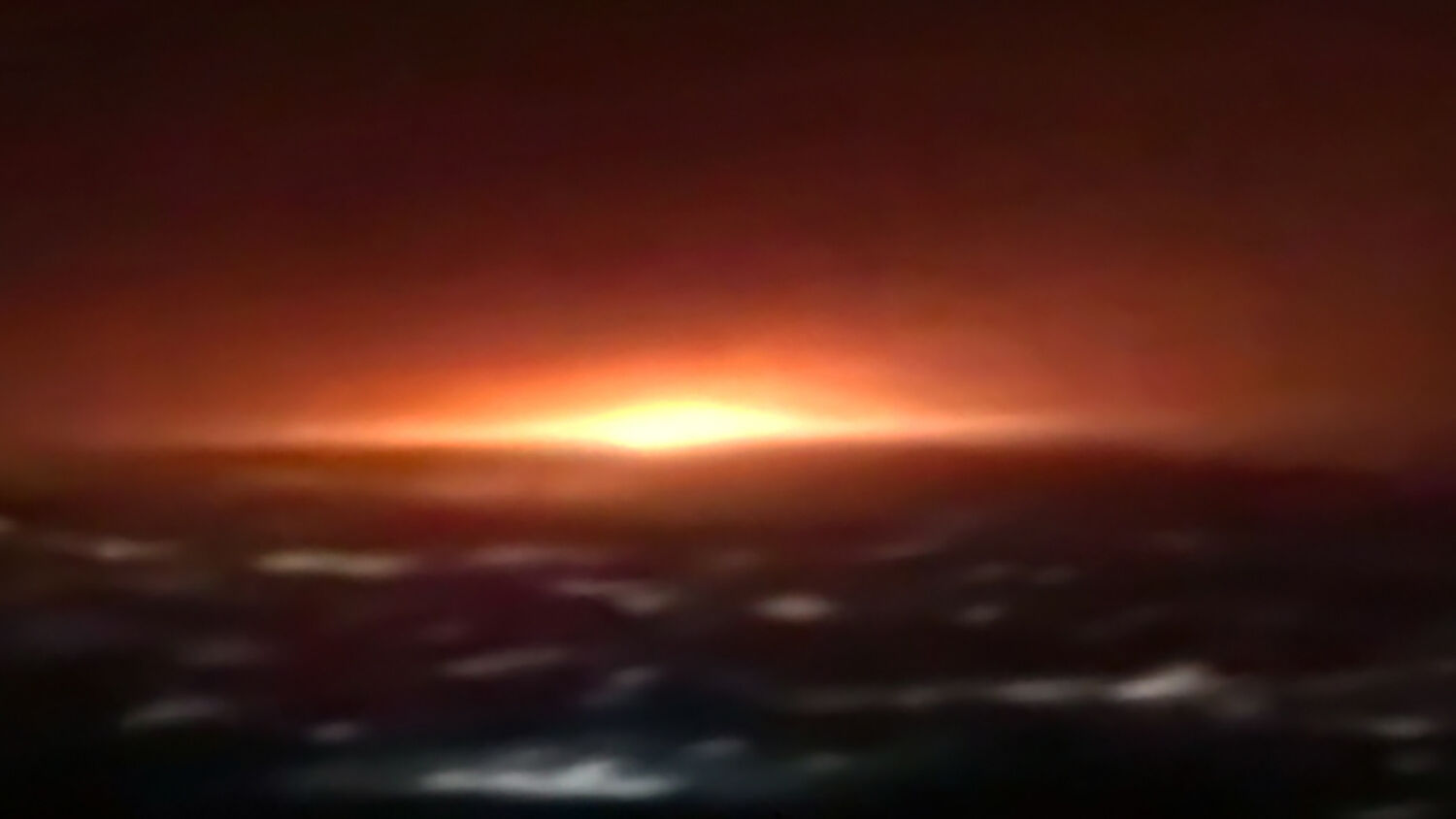 An image grab from footage obtained from Iranian State TV IRIB on June 26, 2020, shows an orange light, resulting from what the country’s defence ministry said, the explosion of a gas tank in the Iranian capital Tehran.
IRIB TV/AFP via Getty Images

Israel resorts to clandestine attacks to stop Iran from acquiring a nuclear weapon.

Over the past two weeks, mysterious explosions tore through areas around Tehran, leading many to believe that Israel is conducting a covert offensive against the Iranian regime.

Iranian media have announced six such explosions. It’s unlikely that Israel is behind all of these attacks; however, two of them stand out as potential Israeli targets because of their possible military dimensions.

The first took place in the early morning of June 26 in Khojir, about 12 miles east of Tehran. According to satellite data of the area, the explosion and subsequent fire seems to have taken place at a facility linked to the production of solid-propellant rockets. According to the Center for Strategic and International Studies, the Khojir site is made up of numerous underground tunnels suspected to be used in missile assembly.

While Israel did not confirm it was behind the attack, targeting a missile production site would be a natural extension of Israel’s no-tolerance policy on Iran’s desire to arm its proxies with Iranian missiles. Over the past two years, Israel has struck missile facilities and convoys of arms shipments inside Syria and Iraq. Israeli Prime Minister Benjamin Netanyahu has said that he will not allow Iran to place precision-guided missiles inside Syria and Lebanon, and he directs almost weekly attacks against such sites.

However, the alleged Khojir attack is the first time in recent memory that Israel has struck a missile production site inside Iranian territory.

The Natanz facility is well known to followers of Iran’s military nuclear program. The attacked building was constructed in 2012 by Iran for the development of advanced centrifuges. According to the nuclear deal, Iran had to halt work on these centrifuges, which are used in the process of purifying nuclear form at an expedited pace. However, for the past two years, work at the Natanz facility has continued.

A high-resolution satellite image of the #Natanz enrichment facility in Iran, collected today by @Maxar Can tell another story about the location of the blast that damege the center. pic.twitter.com/LIiqAUIa8r

According to the Times of Israel, once the new centrifuges were operable, they would be sent far underground to do the work of creating weapons-grade uranium. At which point, it would be very difficult for an Israeli bomb to penetrate the layers of concrete and steel and destroy their production capability. “They were vulnerable while they were still being put together in the above-ground building that was targeted,” the Times of Israel wrote.

According to nuclear experts, the Natanz attack set back the Iranian march toward a bomb by a matter of months or longer. Institute for Science and International Security President David Albright told the Jerusalem Post that the attack was highly impactful. “It is clear that a major explosion took place, destroying nearly three quarters of the main centrifuge assembly hall, generating a fire that blackened a major portion of the building, the blackening visible where the roof had been blown away by the explosion,” Albright said.

As usual, Israeli officials have not confirmed they were behind the attacks. However, the New York Times cited a “Middle Eastern intelligence official” who said Israel was directly responsible for planting a powerful bomb inside the facility. According to the official, the explosion “destroyed much of the aboveground parts of the facility where new centrifuges—delicate devices that spin at supersonic speeds—are balanced before they are put into operation.”

In a separate Reuters report, an Iranian official said, “Iran’s enemies had carried out similar attacks in the past.”

That both attacks took place at two Iranian military sites—one used for the production of nuclear fuel and the other for components that could be used in the delivery of a nuclear weapon—indicates a direct act of sabotage, rather than mere coincidence.

For many anti-Netanyahu commentators, the reason for Israel’s attacks on Iran is purely political. Writing for Al-Monitor, Ben Caspit opined that Benjamin Netanyahu himself might have leaked that Israel was behind the attack in order to divert attention away from bad poll numbers over his handling of the coronavirus. Caspit wrote, “The only card he has left to play is the security card, and he is going for broke. That means setting back the Iranian nuclear program in order to allow Israel and perhaps the United States to block an Iranian nuclear breakout should Iran abandon its ‘strategic patience’ policy.”

It could also be that Israel received a free pass by the Trump administration to attack Iran’s facilities. Curiously, a week before the first attack took place in Iran, the first copies of former National Security Adviser John Bolton’s book made it to reporters. One of the revelations of his book, The Room Where It Happened, was that President Donald Trump supported an Israeli attack on Iran’s nuclear program.

Bolton writes, “On Iran, I urged that he press ahead to withdraw from the nuclear agreement and explained why the use of force against Iran’s nuclear program might be the only lasting solution. ‘You tell Bibi [Netanyahu] that if he uses force, I will back him. I told him that, but you tell him again,’ Trump said, unprompted by me.”

With President Trump’s backing of a military strike now public knowledge, Israel would feel more confident that the U.S. would be compelled to come to Israel’s aid if Iran chooses to retaliate.

As we have reported recently, Iran is currently breaking every stipulation of the nuclear deal. It has reduced its breakout time (the time it takes for Iran to produce enough weapons-grade fuel) from one year down to three to four months. All the while, it continues to purport that it has never desired to produce a nuclear weapon.

While some far-left commentators state that Netanyahu may have ordered the attack to save his own skin politically, most security experts clearly note that Iran’s pace toward developing a nuclear weapon has dramatically increased over the past few months.

Any Israeli action against Iran comes with a risk of retaliation, which is why Israel often chooses not to claim such attacks. If Israel openly boasts of the attack, then Iran is compelled to retaliate, putting Israeli lives at risk. It could do this by instructing any of its proxy forces, such as Hezbollah or Hamas, to rain down thousands of rockets on Israeli civilians.

That Israel would choose to attack Iran with a limited strike on highly prized nuclear and missile assets, and yet kill no Iranians, shows that Israel was after a strategic victory, not a declaration of war.

It also shows that an Iranian nuclear weapon is an imminently real threat.

And with the backing of the United States, it seems the current Israeli leadership is going to do all it can to do stop it.

Conceding the Bomb to Iran

Some leading security experts believe that there is no way to stop Iran’s march toward acquiring a nuclear weapon, so Israel should focus more on developing its deterrence measures for when Iran gets the bomb.

In an interview with the Times of Israel on July 8, former head of Israel’s Mossad Intelligence Agency, Shabtai Shavit, revealed, “Iran can’t be stopped in nuke bid, but can be deterred.”

“That means we have to ensure we have the capabilities so that if you [Iranians] go out of your minds one day, and want to use [the bomb] against us, take into account that Iran will cease to exist,” Shavit stated. “The price you will have to pay if you want to utilize that capability against us will be prohibitive.”

Such reasoning might have worked with the Russians during the Cold War, but does anyone really believe Iran would be deterred by mutually assured destruction? If you don’t give a loaded gun to a crazy person, you wouldn’t give a nuclear weapon to the fanatical regime of Iran.

As Trumpet editor in chief Gerald Flurry has repeatedly stated, Iran is not a rational actor. In his booklet Great Again, Mr. Flurry writes, “The Iranian leader believes that causing a nuclear cataclysm will hasten the coming of his messiah. No matter what happens, these religious zealots believe they are winners. No other nuclear power thinks like that! It makes nuclear war inevitable.”

The fact that the former head of Israel’s intelligence agency is willing to concede that Iran will acquire a nuclear weapon shows that nuclear armageddon is at the door.

Logic tells us that, and so does biblical prophecy.

The Trumpet has repeatedly warned about the prophetic significance of a nuclear-armed Iran. Our free booklet The King of the South explains the Iranian regime’s role in end-time events.

Despite the horrific scenario of a nuclear Iran, there is some comfort.

Several biblical prophecies show that Iran’s push for nuclear weapons actually foretells a coming end to all nuclear proliferation. Iran will indeed push the whole world toward war, but the culmination of that war will be the Second Coming of Jesus Christ.

Jesus Christ prophesied the outcome of these problems in Matthew 24:21-22. He said the coming “great tribulation” would be worse than any in mankind’s long, tragic history! He warned that unless these perilous days were shortened, no flesh would be saved alive! … Without the return of Jesus Christ, mankind would war all the way to the point that there would not be a single human being left alive on Earth! This is talking about the nuclear world war just ahead of us!

A thousand attempts have been made to stop Iran from gaining a nuclear weapon. Hacking slowed but didn’t stop them. Espionage and assassination have yielded similar results. Attempts at friendship have been the most disastrous of all. Ongoing sanctions haven’t fared much better. Israel’s current turn to actual military action only further proves how close Iran now is to acquiring a nuclear weapon. And the radical regime will likely get it.

But there is good news at the end of all of this. As Mr. Flurry writes, “Christ is going to stop us from destroying ourselves completely! He—not an Islamic Mahdi currently hiding in a well—is going to return to this Earth. Jesus Christ is going to return in all power from heaven and place His feet upon the Mount of Olives, and bring us the real, true and lasting peace that we all desire!”