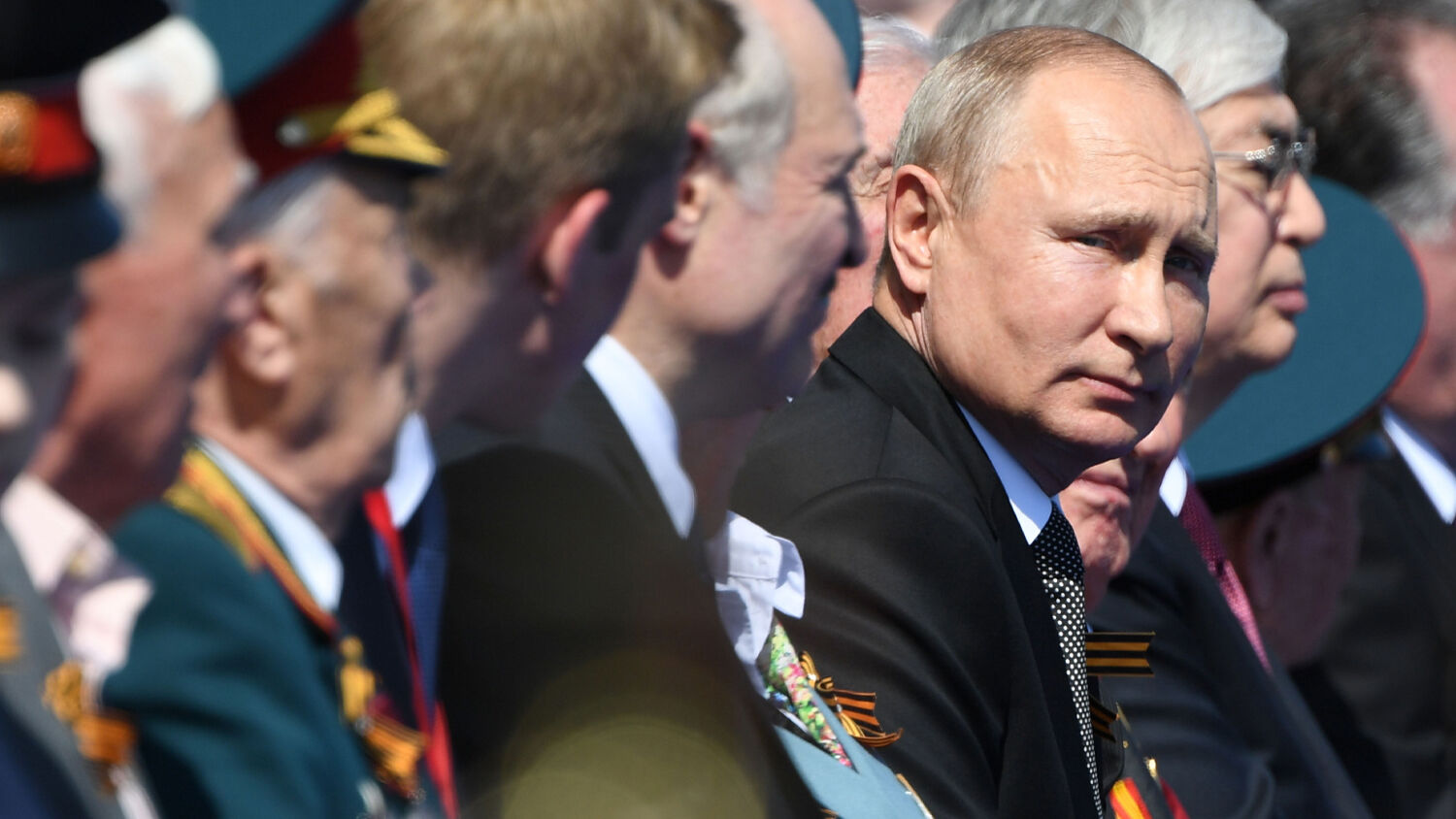 President of Russia, Vladimir Putin, looks on prior to the Victory Day military parade in Red Square marking the 75th anniversary of the victory in World War II, on June 24, 2020 in Moscow, Russia.
Sergey Pyatakov - Host Photo Agency/Getty Images

Coronavirus or not, the Russian ruler pressed ahead with the parades and the referendum.

Russian President Vladimir Putin flexed Russia’s military muscle on June 24 with parades commemorating the 75th anniversary of the World War ii victory over Nazi Germany. The celebrations came the day before a national vote designed to legitimize his plan to keep power until 2036.

Russia’s delayed military parade marking the 75th anniversary of the end of World War II has kicked off in Moscow. pic.twitter.com/ERDun0oxYl

“We can’t even imagine what the world would have become if the Red Army hadn’t come to its defense,” Putin said in a speech in Moscow about the conflict known in Russia as the Great War, in which 27 million Soviet Union citizens died. The anniversary parades celebrate “the triumph of good over evil, peace over war, life over death,” he said. “Today we bow our heads to the blessed memory of all who did not return from the war [and] mourn the veterans who have already left us.”

Russia’s annual Victory Day celebrations are normally held on May 9 but were postponed this year due to the covid-19 outbreak, which has so far infected some 640,000 individuals across the country. Some advisers had urged Putin to further delay the celebrations until after the virus is better contained. But he was eager to use the extravagant exhibition of military might to galvanize the Russian population because of an “all-people vote” that began the next day.

The vote represents the final phase of a plan Putin initiated in January and announced on March 10 that will change Russia’s constitution in a way that resets the clock to zero for his presidential term limits. Without the change, Putin, who has ruled Russia either as president or as prime minister since 1999, would be required to leave the presidential office after his current term ends in 2024. The change will allow him to run for president again. The same day Putin announced the measure, the Duma voted overwhelmingly to pass it. The legislation then sailed through the upper house and was approved within days by Russia’s highest court.

Now Putin says he is giving Russian voters the final say on the law.

Besides the change letting Putin prolong his reign, the package being voted on from June 25 to July 1 also includes measures intended to codify popular values into the constitution and to mitigate the financial struggles afflicting a growing number of Russians. One clause enshrines “faith in God,” and another officially outlaws same-sex “marriage.” One guarantees a minimum wage, and yet another mandates an annual increase in pension payments. Analysts say those measures are bundled in as a sweetener to encourage more voters to turn out and cast their ballots in favor of the referendum.

Putin’s government also arranged raffles for voters that will deliver some 2 million prizes. The military parade was just one final measure to stoke the patriotism of the Russian people, in order to further boost participation in the referendum—and thereby lend a thicker veneer of legitimacy to Putin’s power grab.

This move by Putin to prolong his rule takes on great significance when viewed in the light of Bible prophecy. In the Trumpet’s September 2014 issue, editor in chief Gerald Flurry explained: “We need to watch Vladimir Putin closely. He is the ‘prince of Rosh’ that God inspired Ezekiel to write about 2,500 years ago!”

Mr. Flurry’s article examines the Bible’s prophecies about a multinational Asian confederation that will congeal in the end time and field an army of 200 million soldiers. He calls special attention to Ezekiel 38:2, which labels the individual who will lead this Asian army as the “prince of Rosh, Meshech, and Tubal” (Young’s Literal Translation).

Meshech and Tubal are ancient names representing the modern Russian cities of Moscow and Tobolsk. Rosh is a variation of an ancient name for Russia, which was anciently called Rus. This is supported by the Benson Commentary on the Old and New Testaments and the Jamieson, Fausset and Brown Commentary.

Ezekiel goes on to describe specific military campaigns that will be waged by this Asian power, led by the “prince of Rosh.” Placing these prophecies alongside Putin’s tightening hold on power within Russia, and the increasingly brazen foreign policy the country has adopted under his command, Mr. Flurry wrote:

Putin’s increasing sway over other nations such as China, India and the other 11 that participated in his military parades adds to the proof that he is the “prince of Rosh” that will lead a multinational Eurasian force.

To understand more, order your free copy of Mr. Flurry’s booklet The Prophesied ‘Prince of Russia.’