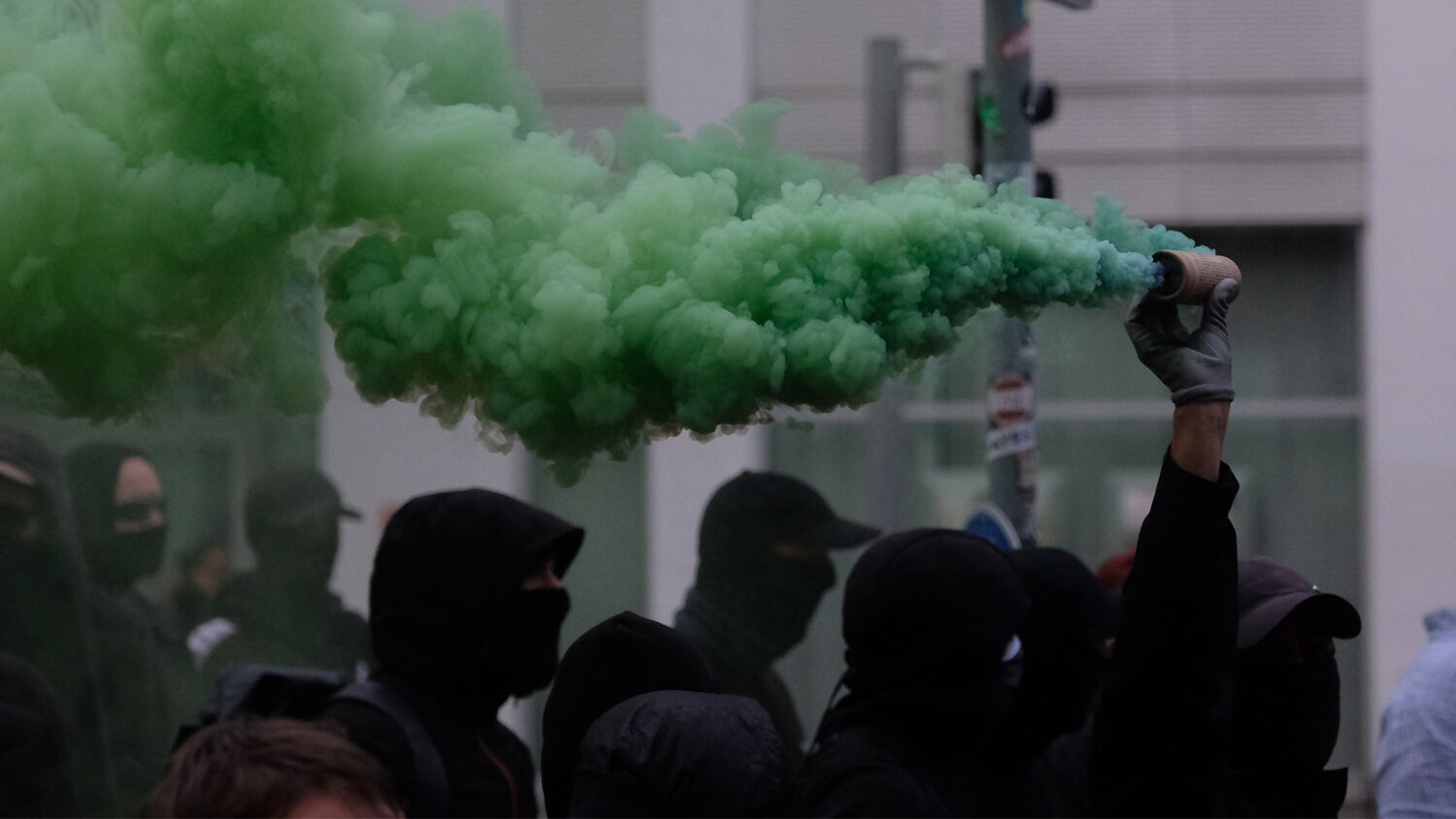 A left-wing demonstration marches through the Connewitz district in Saxony on June 17 and ignites pyrotechnics.
Sebastian Willnow/picture alliance via Getty Images

Left-wing extremist crimes increased by 40 percent in 2019, and the number of right-wing extremists increased by over 30 percent, according to the Federal Office for the Protection of the Constitution. These alarming statistics show that the extremes in Germany are growing more violent. This foretells a dangerous future for the country.

According to Der Spiegel sources, Germany’s domestic secret service categorized 32,080 people as potential right-wing extremists in 2019, up from 24,100 in 2018. This estimate includes 7,000 supporters of the radical wing of the far-right party Alternative für Deutschland (AfD). According to the Federal Office’s annual report, the number of “violent” right-wing extremists was 13,000 in 2019.

Since the beginning of 2020, authorities began monitoring an additional 13 extremists. The Criminal Police Office monitors 65 right-wing perpetrators in Germany. But as n-tv.de noted on June 3, some “doubt whether that number actually reflects” how many should be watched.

“There are almost 15,000 violent right-wing extremists in Germany, and yet only a fraction of them are listed as dangerous by the police,” Free Democratic Party member of the Bundestag Benjamin Strasser said. The fact that their number has increased so much within the past 12 months “makes it clear that in the past there was not enough classification.” This topic bears particular importance in Germany since a suspected right-wing extremist shot Walter Lübcke, president of the district council for Kassel.

Germany’s elite commando unit, the Special Forces Command (ksk), had at least 20 personnel investigated recently for suspected extremist activities and neo-Nazi loyalties. In proportion to the rest of the troop, the numbers in the ksk are estimated to be the highest in the military.

A letter from a captain of the Bundeswehr ksk elite has further increased concerns, Spiegel Online reported June 12. In the beginning of June, the officer wrote directly to Defense Minister Annegret Kramp-Karrenbauer claiming that extremist cases have been “ignored or even tolerated.” The thousand-man-strong unit has grievances that are “more profound and structural,” wrote the officer.

This problem has also affected the police. In early June, law professor Thomas Feltes, who held the chair for Criminology, Criminal Policy and Police Science at Ruhr University–Bochum, claimed that instructors and superiors paid too little attention to racist attitudes among police officers.

Many German citizens are dissatisfied. They feel misunderstood and ignored by the government. This has been the case for years, but only recently have so many turned openly to extremist parties and ideologies.

Those on the far left accuse the government of caring more for the rich than the working class. They blame the capitalist system for fueling a social divide, stating the solution is helping everyone prosper in a socialist system that opposes the Anglo-Saxon world.

This toxic mixture of far-right and far-left ideologies was prevalent during the days of Adolf Hitler. Hermann Göring, Hitler’s Air Force commander, explained: “Our movement seized the concept of socialism from the cowardly Marxist, and tore the concept of nationalism from the cowardly bourgeois parties, throwing both into the melting pot of our worldview, and producing a clear synthesis: German National Socialism.”

Today, many people view Germany as a peaceful nation, with a working class that ensures economic prosperity, police forces that bring law and order, and a military that is ensuring stability domestically and abroad.

But in the lead-up to World War ii, the silent majority was led by extremists who caused the greatest havoc on Earth.

Today, the world is ignoring the rising extremism in Germany. Yet the Bible says that this is most definitely a trend we need to watch.

The Bible reveals that a leader will unite Germany and channel its diverse ideologies toward a single purpose. Numerous Bible prophecies (e.g. Revelation 17) indicate that this strongman will rule in the tradition of the Holy Roman Empire. But this future leader will be more cunning and persuasive in demeanor. In “European Political Extremists Demand Authoritarian State,” Trumpet contributor Andrew Miiller explained:

Bible prophecy reveals that extremist forces across Europe will soon unite behind a populist demagogue who will rule over a revived Holy Roman Empire. This tyrant could very well draw support from both the far-left and the far-right political parties that are currently on the rise.

Instead of establishing a type of socialism that is exclusive to one nationality (as Adolf Hitler did) or trying to establish a type of socialism that purposes to include all nations on an equal footing (as Vladimir Lenin tried to do), he will establish an authoritarian government that rules over a union of 10 nations in Europe. Like many of the far-right parties currently on the European scene, these nations will be bound together by the Roman Catholic faith, and like many of the far-left parties, they will also be bound together by their hatred for the Anglo-Saxon world.

Request a free copy of A Strong German Leader Is Imminent to learn who will be leading in the tumultuous times ahead. The Bible reveals that this leader will bring temporary unity to Europe (Daniel 2:41-43), while causing war and bloodshed (Daniel 8:23-24). Yet in this same booklet, Trumpet editor in chief Gerald Flurry also explains the great hope in these prophecies (Daniel 2:44).