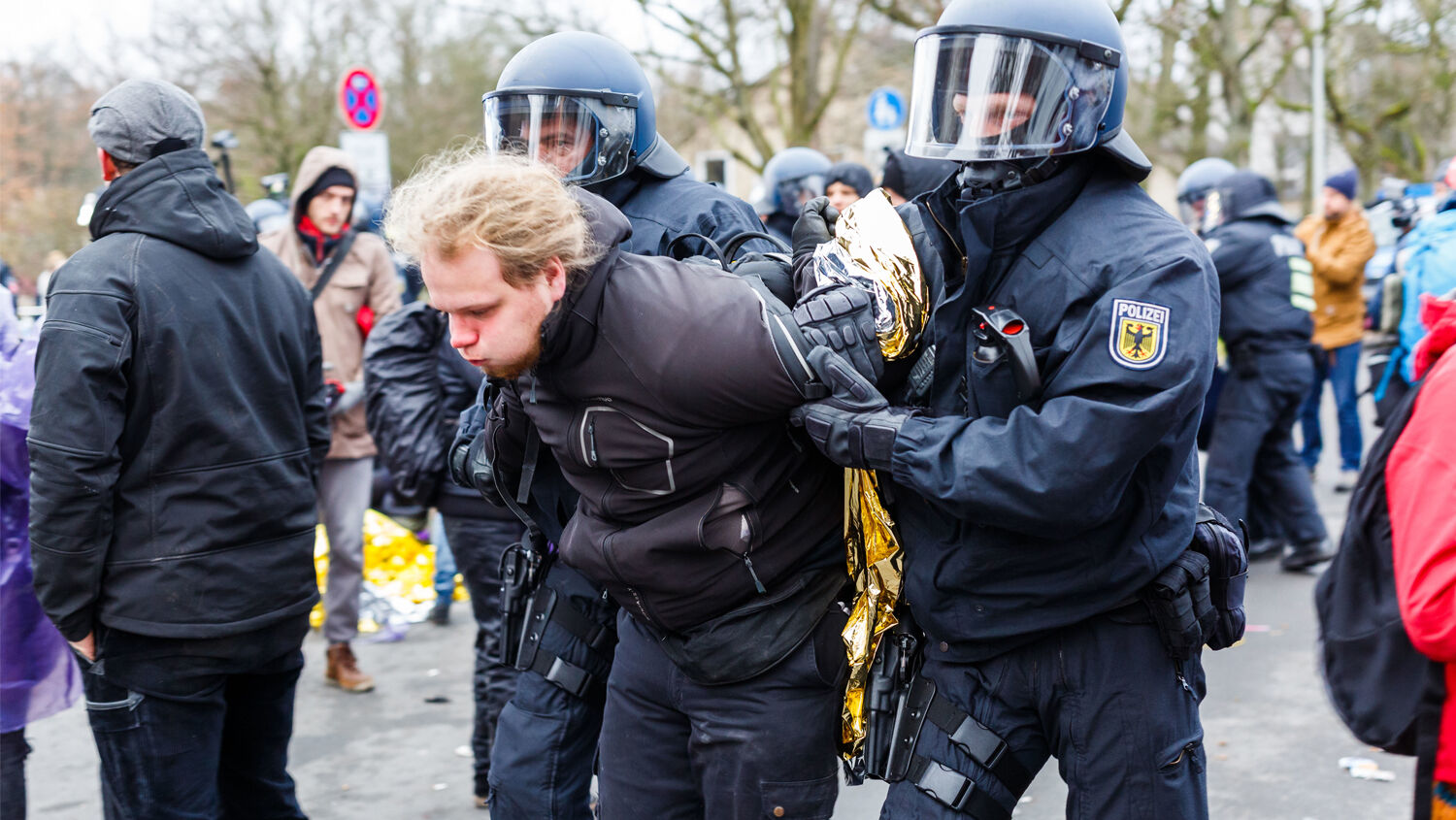 Riot policemen remove a protester during a demonstration against the Alternative für Germany on December 2 in Hanover, Germany.
PETER STEFFEN/AFP/Getty Images

A toxic mixture is simmering in Germany, one that has previously boiled over into fascism.

In 2017, German Chancellor Angela Merkel tried to appease the extremes in Germany. But far-right and far-left violence proliferated on both sides. The two seemingly opposite ideologies live on the support of a common audience: the unsatisfied citizen. Together, the two camps hold power that only a few in history have dared to fuse.

While Merkel does not dare tap into that power, another leader soon will.

The nation’s last election showed that Germany has millions of unsatisfied citizens. The far-right Alternative für Deutschland took 12.6 percent of the vote, up from 4.7 percent, and secured its first seats ever in parliament. Support for the well-established far-left Die Linke party rose from 8.6 percent to 9.2 percent, despite losing voters to its far-right counterpart.

Throughout Germany, 22 percent voted for extreme parties. In East Germany, 40 percent voted extreme, revealing a great amount of dissatisfaction. On top of that, neither side kept its frustration to itself—both expressed it violently.

Though the two extremes are opposites, their followers often switch camps, as revealed in the recent election. This means that both parties rely on disgruntled voters who express some of the same dissatisfaction, though in different ways. After the election, Die Linke leaders said they felt they should have adopted some of the right’s program and addressed the refugee crisis differently.

Though Germany is economically one of the best-placed countries, it’s citizens in the lower and middle classes are dissatisfied. They feel misunderstood and ignored by the government. This has been the case for years, but only recently have so many openly supported extremist parties.

How the Two Extremes Express Their Hatred

Those on the far right accuse the government of caring more for the foreigners in their midst than for traditional Germans. The main problem, in their view, is the huge influx of refugees. To them, the solution is a more nationalistic country that defends its own society, culture, ethnic identity, race and nation. The far right blames the government for acting against Germany’s national interest.

Thus far-right violence has reached a new level in Germany. Hatred against refugees has become more common, as have death threats to Angela Merkel. The AfD celebrates Nazi ideologies that were thought to be dead. In its push to overthrow Merkel, it has been rewarded with millions of supporters. The far right now has a stronghold in Germany not seen since the end of World War ii.

Those on the far left accuse the government of caring more for the rich than the working classes. The main problem, in their view, is the huge number of poor in Western and Third World countries. They blame the capitalist system for fueling a social divide that increases poverty while the rich swim in luxury. To them, the solution is for the government to help everyone prosper in a socialist system that opposes the Anglo-Saxon world.

In 2017, far-left violence also reached a new level. While far-right extremists are upset about Islamic terrorism, leftist extremists produce their own terrorism under a guise of righteous motives. At the G-20 summit in Hamburg in early July 2017, left-wing extremists attacked the police and blamed the violence on law enforcement officers. Though the police backed off from the initial legal charges, prosecution against some of the protesters continued.

So the radical left intensified its war on the police in December by publishing 54 photos of the most wanted officers. Christian Democratic Union (cdu) interior policy spokesman Armin Schuster described the escalation as “the beginning of terror,” according to Deutsche Welle.

One would think the left would be pleased with Merkel’s open-door policy; after all, the left’s ideology promotes the free movement of people rather than goods. But in its view, the whole crisis has been caused by a capitalist system that keeps getting richer while Africa suffers poverty. Since Merkel is still allied with that system, she is to be blamed.

At the center of this political spectrum is Merkel. She hoped her neutral position would please both sides, but the election proved she was wrong. Merkel didn’t venture close to either extreme as it would have displeased the other, so she failed to address the core problem of both extremes. But what other option did she have?

History shows that there is a way to please both extremes at the same time. While Merkel did not dare take that route, we at the Trumpet believe another leader will.

The Horseshoe Theory explains how. According to the theory, the political spectrum should be seen as a horseshoe rather than a straight line: Just as a horseshoe comes closer together at the ends while distance grows in the middle, so also do political parties. The more extreme the parties are, the closer they are to one another—and that’s exactly what we see in Germany today.

Germany’s election proved that the citizens are distancing themselves from the middle. History proves that the two extremes can form one united government—not by uniting the two parties but by addressing their core issues.

But there is a reason why Merkel did not venture down that path: The two sides make a toxic mixture of right-wing nationalism and left-wing socialism. In recent German history, Adolf Hitler faced a similar issue—and he fused the two extremes into one movement

Hitler’s air force commander Hermann Göring put it this way: “Our movement seized the concept of socialism from the cowardly Marxist, and tore the concept of nationalism from the cowardly bourgeois parties, throwing both into the melting pot of our worldview, and producing a clear synthesis: German National Socialism.” (To learn more about how the far left and far right can merge into one government, read Andrew Miiller’s article “European Political Extremists Demand Authoritarian State.”)

Notice the following quote from a speech Hitler gave at the Berlin Sports Palace in January 1941:

First, the German nation had to learn to understand its own political struggle, which enabled it to rally Germany’s entire strength, above all its idealistic strength. And this idealistic strength was at the time only to be found in two camps: in the socialist and in the nationalist camps. But these were the camps between which there was the most mortal feud and strife. These two camps had to be fused into a new unit.

Just as in the lead-up to Hitler’s rise to power, Germany’s extremists are split into two camps. And for the first time since World War ii ended, both are represented in the German parliament. Also, just as then, the two oppose and fight each other. But that didn’t stop Hitler from fusing and using their ominous power.

Numerous Bible prophecies (e.g. Revelation 17) reveal that Germany will soon be led by a strongman who rules in the tradition of Adolf Hitler. But this future leader will be more cunning and persuasive in demeanor. Request a free copy of A Strong German Leader Is Imminent to find out who will be leading in the tumultuous times ahead.

Daniel 11 reveals how this leader will channel the far right’s growing hatred—not just in Germany but all of Europe—into an attack on the source of violence in the Middle East and the cause of much of the refugee crisis: Iran. (Read “Germany’s Secret Strategy to Destroy Iran” for more information.) In Psalm 83, we read about how this leader will channel the far left’s growing hatred into an attack against what it believes to be the source of growing poverty: the Anglo-Saxon world. (Watch our video “The Psalm 83 Alliance” or read “A Mysterious Alliance” for more information.)

Hitler had a similar goal in mind, but he directed all his strength to conquer Europe first. Today, Europe is largely united, and far-right and left-wing extremists are on the rise throughout the Continent. Thus a Fourth Reich is coming that will be more powerful than Nazi Germany, encapsulating not only the power of Germany’s far right and far left but all of Europe. Our booklet Who or What Is the Prophetic Beast? explains in detail how Germany’s future government will work as foretold in Bible prophecy. The prophecies line up exactly with what the far right and far left are demanding today. The two not only can work together, prophecy foretells that they will and that in doing so, they will bring much suffering to this world.

While the Bible is full of prophecies about a coming Great Tribulation, these prophesies are not about gloom and doom alone. This time of great peril and suffering will be followed by a time of tremendous peace! Trumpet editor in chief Gerald Flurry always points readers to that hope. If you want to understand the full picture of these prophecies, request your free copy of his booklet Nahum—An End-Time Prophecy for Germany, which explains in detail why Germany is rising and what follows thereafter.