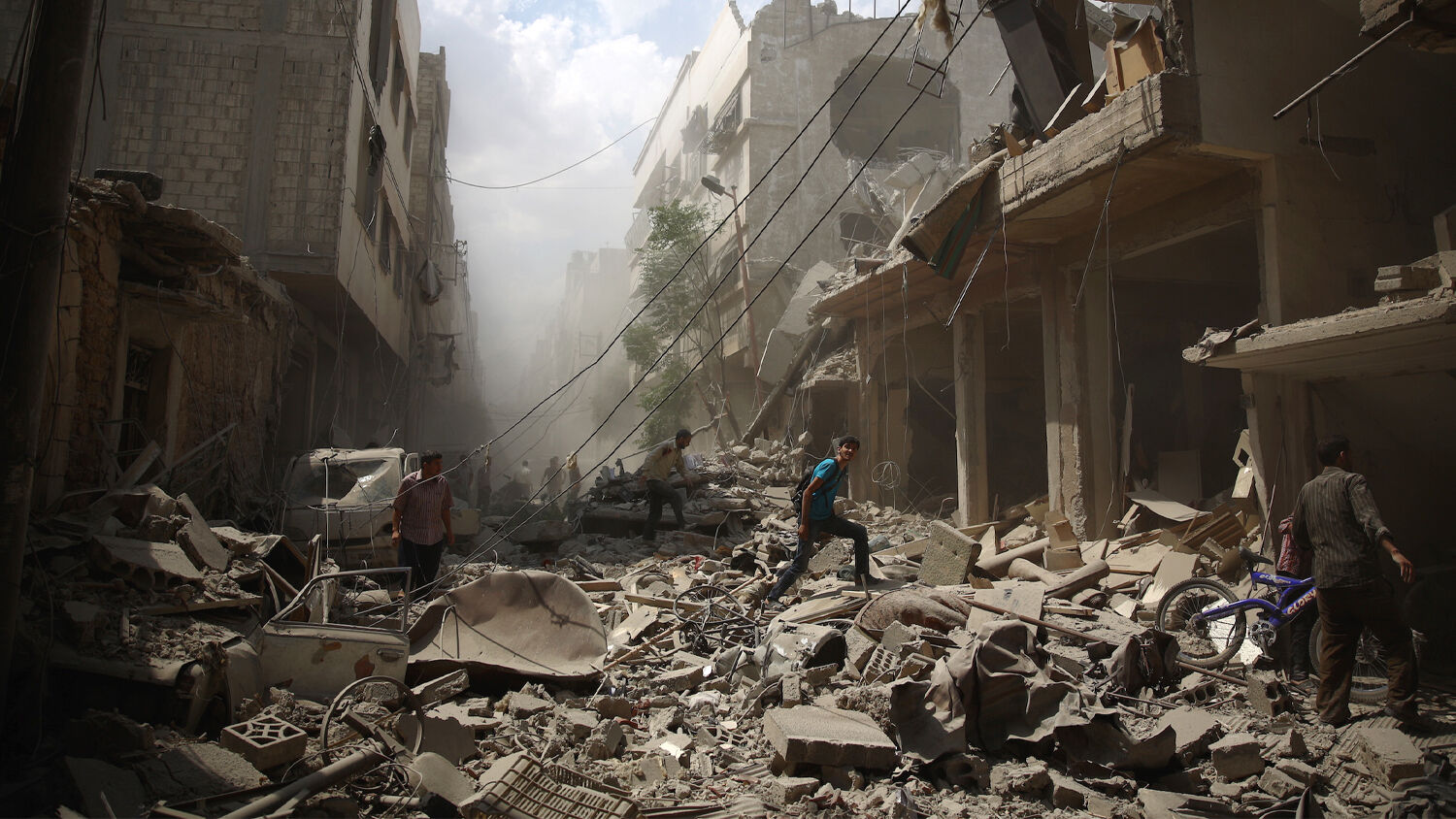 Syrians walk amid the rubble of destroyed buildings following reported air strikes by regime forces in the rebel-held area of Douma, east of the capital Damascus, on Aug. 30, 2015.
ABD DOUMANY/AFP via Getty Images

For nine years, the Syrian civil war has raged on. Over 700,000 people have been killed and over 6 million others have been internally displaced from their homes. Another 5 million have escaped the country; some walked to Europe, but the majority are stuck inside Turkey. What’s left of the rebel fighters trying to overthrow the regime of Syrian President Bashar Assad are located inside the northwestern Idlib province, an enclave mixed with jihadis, freedom fighters and another million civilians living under the protection of a Turkish security umbrella. The result of Assad’s war is a human tragedy so unfathomable that it is barely considered by people outside the region.

Yet finally, change is coming to Syria.

Today, the United States placed the most powerful financial sanctions yet upon the Syrian regime. Known as the Caesar Syrian Civilian Protection Act, the legislation empowers the U.S. to sanction any nation or individual that does business with sectors critical to the survival of the Assad regime.

From today, anyone that does business with Syria outside of humanitarian support will be subject to the full force of U.S. secondary sanctions. Basically, what the U.S. has done to Iran, it is now forcing on Syria.

The Caesar Act clearly labels Assad’s regime as criminal, and anyone that does business with it will be punished.

This decision by the Trump administration is the clearest sign yet from America that it seeks Assad’s removal from office and is willing to do everything it can, short of military action, to accomplish that purpose.

The sanctions will come at an extremely sensitive time for Assad, whose economy is already facing its worst downturn in history. The Syrian currency has lost half of its value in the past month. The hyperinflation has doubled the price of staples, such as bread and sugar, and led the World Food Program to report last week that Syria is at risk of falling to mass famine. At least 85 percent of Syrians already live in poverty.

Assad’s traditional backers, Iran and Russia, are also facing financial hardships, making it virtually impossible for them to further support the regime. To keep afloat, Assad has started to demand massive “tax payments” from the private sector and has locked up rich loyalists in order to take over their private businesses.

Assad sacked his finance minister last week, likely to deflect blame for the economic situation. However, facing the surging food prices, many people are taking to the streets with bold calls for Assad’s removal from power.

Earlier this week, Politico ran a story titled “Is Assad About to Fall?” in which Charles Lister described how for the first time in nine years the notoriously submissive Druze community has started to protest. In protests last week, the Druze in the southern Suwayda province shouted, “Cursed your soul, we are coming for you!” Pro-Assad loyalists started violent counterprotests, but the Druze are yet to back down from calling for Assad’s departure.

The Druze uprising is indicative of Assad’s heightened vulnerability, and as Lister related, presents a new opportunity for the Trump administration to take down Assad. He wrote:

This new and almost unprecedented moment offers America an opportunity. Although it may seem like the Trump administration—and particularly the White House—has paid little attention to Syria, it has an opening now. If it uses its remaining levers to exploit Assad’s newly vulnerable position within an energized diplomatic effort, in concert with our many allies in Europe, the Middle East and elsewhere, it has a chance to usher in real and long-overdue changes to a country that could otherwise become a global tinderbox.

Lina Khatib of the Chatham House think tank shares Lister’s optimism, writing last month that Assad’s “toolbox is empty, and he is actually more vulnerable than ever.”

The full enforcement of the Caesar Act, cutting off Assad’s international lifelines, is coming at just the right time.

No doubt some are wondering why it took almost a decade to enact the sanctions against the Assad regime.

The Caesar Act itself is named after a Syrian defector who released about 50,000 images between 2012 and 2013 that provide proof of Assad’s campaign of terror against his own people. Code-named Caesar to disguise his identity, the former Syrian military police photographer took images of over 10,000 corpses that had gone through the notorious government-run Hospital 601. The Damascus hospital was used in processing bodies and documenting deaths for the government of many of Assad’s political opponents during the early years of the war.

Caesar saved many of the images to thumb drives and hid them in his shoes as he smuggled the trove out of the country over a two-year period. The images were provided to United States law enforcement agencies in early 2014 and were made public in July of that year. The photographs provided “the best evidence to date of the industrial-scale campaign by the government of Bashar Assad against its political opponents,” wrote the Wall Street Journal at the time.

It was hoped by many, including Caesar, that the evidence would be used to create a strong case for Assad to be tried as a war criminal. However, no strong case was brought forward by the U.S.

During 2014, the Obama administration was in the midst of negotiations with Iran, Assad’s chief backer in the war, and knew that a decision to target Assad with prosecution would blow up the deal. Frederic Hof, who served as a top Obama adviser for Syria, said that the evidence was a “double-edged sword” for the administration. Hof told the Wall Street Journal, “On the one hand, it’s going to illustrate perhaps better than anything heretofore the absolute horror of what’s going on. On the other side, it raises the inevitable question: What are we actually doing about it?” The Obama administration chose to do little with the evidence.

A similar decision was made in 2013 when Assad used mustard gas on his own people, killing 1,700 men, women and children in a single attack. Even though the attack crossed President Barack Obama’s notorious “red-line,” the U.S. failed to act against the regime. Hof later told Jay Solomon, “There was definitely a fear that strikes in Syria could alienate the Iranians and make them walk away from diplomacy” (The Iran Wars, 2016).

And so, just as there was no retribution for the chemical weapons attack, Caesar’s cache of evidence did nothing to motivate the Obama administration to act forcefully against Assad. Solomon wrote in 2016, “This type of hesitancy came with a cost: Hundreds of thousands of civilians died in Syria, and the conflict fueled the rise of Sunni extremist groups such as the Islamic State.”

“The reason that so many journalists and opinion-makers of good conscience cannot make the connection between the Iran deal and the Syrian war is because the truth is too awful,” wrote Lee Smith in 2016. “The president’s policy is not simply a matter of a lack of vision or political will. The money Iran received through the [Joint Comprehensive Plan of Action], as well as the $1.7 billion paid in ransom for American hostages, has helped fund Iran’s war in Syria—which the president proclaimed to be Iran’s business and not ours.”

In search of rapprochement with Iran, President Obama gave Assad a free pass to butcher his people. Obama himself even penned a letter to Iranian Supreme Leader Ayatollah Khamenei, saying that the U.S. wouldn’t target Assad.

This is one of the reasons why Trumpet editor in chief Gerald Flurry called the nuclear deal the “Worst Foreign-Policy Blunder in American History.” Mr. Flurry wrote, “This deal does not make the world safer—it is a disaster for the world! And the fact that many people say it’s a cause for celebration is a sure sign of tragically broken leadership.”

A Turn for Syria

In stark contrast to the Obama administration, President Donald Trump campaigned on ending the nuclear deal with Iran, rightly viewing that nation as the nexus of terrorism in the Middle East and the cause of regional instability. His withdrawal from the nuclear deal, as well as his reinstatement of sanctions on the Iranian regime, has temporarily restrained Iran from pursuing an even more aggressive foreign policy across the region.

As Mr. Flurry noted in “Saving America From the Radical Left—Temporarily,” the election of Mr. Trump has led to a prophesied temporary resurgence of the U.S. both at home and abroad. Mr. Flurry wrote, “Donald Trump has proved himself willing to take a stand where others have not. It is quite something to behold him resisting these anti-American forces! … When you compare what this president is doing to what his predecessor did, there has been a clear change in direction, one that will slow the speed at which America is being pulled apart.”

We are now witnessing some of the knock-on effects internationally of the prophesied resurgence. Clearly, Mr. Trump’s change of direction has been a boon for the U.S.’s traditional Middle Eastern allies, Israel and Saudi Arabia, both of which have been given the green light by the U.S. to hit back at Iranian proxies in the region. Israel conducts almost weekly raids on Syrian and Iranian military installations inside Syria.

When President Trump exited the deal in 2018, we noted that Iran would likely lose out in certain areas of power. Based on Bible prophecy, we indicated pressure from the U.S. could lead to Iran losing power inside Syria. We wrote:

Point nine specifically demands that the Islamic nation “withdraw all forces under Iranian command throughout the entirety of Syria.” As we have forecast since the beginning of the Syrian civil war, Bible prophecy indicates that Iran will lose its position of influence inside Syria. U.S. pressure could lead to that change.

With the Caesar Act striking Assad at his most vulnerable moment, it is likely that we will soon witness Iran’s ouster from Syria. Such a move would fulfill a landmark forecast made by Gerald Flurry nine years ago, just after the Syrian civil war began. To study more of the biblical foundation to this forecast involving Iran’s ouster from Syria, please read “How the Syrian Crisis Will End,” by Gerald Flurry.