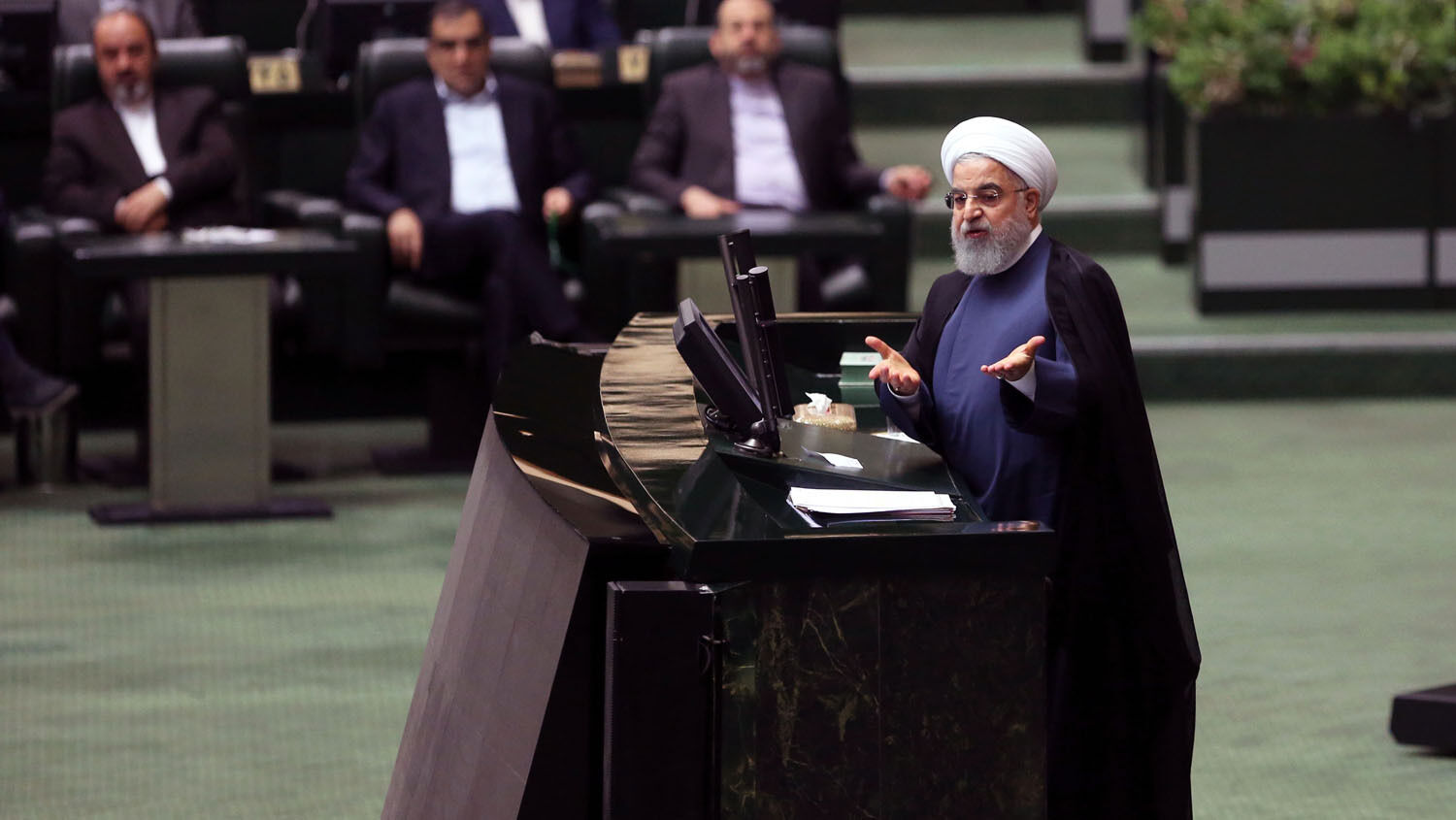 America’s largest tranche of sanctions on Iran are now in effect. How successful will they be?

Economic pressure against Iran ratcheted up a notch on Monday when the United States reinstated yet another tranche of sanctions on the Islamic Republic, exactly 180 days after U.S. President Donald Trump announced his country’s withdrawal from the Iran nuclear deal. The sanctions are designed to cut off Iran’s ability to fund its global terrorist activities and to pressure Iran’s government to change course.

In comments to Fox Business on Monday, U.S. National Security Adviser John Bolton said, “[W]e are going to do everything we can to squeeze Iran hard. As the British say, to squeeze them until the pips squeak …. [It’s] their choice. The mullahs in Tehran either change their behavior dramatically or face economic disaster.” (See video below.)

These sanctions target Iran’s most crucial industries—oil, gas and shipping—which earn most of the revenue and hard currency the nation desperately needs right now. “Our goal remains to get to zero oil purchases from Iran as quickly as possible,” a U.S. State Department spokesman explained on October 30. Theoretically, the effort will bring the Iranian economy to a screeching halt.

These sanctions started hurting even before they were officially reinstated on Monday. When President Trump announced on May 8 America’s withdrawal from the Iran nuclear deal, formally known as the Joint Comprehensive Plan of Action (jcpoa), he gave Iran’s trading partners 180 days to wind down their business ventures. Most of them have scaled back their business dealings with Iran accordingly. Even European companies, whose governments have largely opposed President Trump’s withdrawal from the nuclear deal, have voted with their feet, with all major companies pulling out of Iran over the past six months.

Economists predict that Iranian oil and gas revenue could now be cut by as much as half. The International Monetary Fund forecasts a 1.5 percent contraction of the Iranian economy by the end of this year and a 3.6 percent contraction by the end of next year. Already, the Iranian currency, the rial, has fallen 70 percent in the past year, leading to a steep rise in inflation.

The ultimate goal for such intense economic pressure on Iran is, as U.S. Secretary of State Mike Pompeo said in an October 31 interview, to dissuade Iranian leaders from “squandering … the Iranian people’s money on … silly malign activities” and to “get them to change their behavior.”

Back in May, Pompeo listed 12 conditions that Iran must meet in order for sanctions to be alleviated. Given the scope of the demands, the only way Iran would be able to comply is if there is complete regime change.

The US will impose the strongest sanctions regime in history on Iran, says Sec. Pompeo.
Here’s the list of 12 Trump administration demands for Tehran to get relief: pic.twitter.com/NikEnuCzdU

But will these sanctions actually compel Iranian leaders to change their behavior?

As tough as these sanctions are, it’s important to note at the outset that they are not as bruising as they were intended to be, at least not initially.

Indeed, in announcing the sanctions on Monday, Secretary of State Mike Pompeo said that eight nations will receive waivers on purchasing Iranian oil for the time being in order to not raise the international oil price, which would affect American consumers. Mr. Trump confirmed this on Monday.

China, India, South Korea, Japan, Italy, Greece, Taiwan and Turkey can continue imports for now without penalty. These exemptions are to last 180 days, which could mean that Iran’s most serious economic woes are still a few months off.

“We have decided to issue temporary allotments to a handful of countries responsible to specific circumstances and to ensure a well-supplied oil market,” Pompeo said. “Each of those countries have already demonstrated significant reductions of the purchase of Iranian crude over the past six months.”

U.S. officials have said these nations with exemptions will deposit Iran’s revenue in escrow accounts, and Tehran will be able to use the funds for only humanitarian purposes.

Pundits often say that Iran does not respond to pressure; it only responds to great pressure. What’s implied by this adage is that if the pressure is not great enough—if there exists a number of factors mitigating the intended full effect of sanctions—then Iran will actually be incentivized to become more adamant and belligerent.

‘Submission Is Much Costlier Than Resistance’

“With respect to the U.S. sanctions,” wrote the Washington Institute for Near East Policy on October 29, “some officials close to [Iranian Supreme Leader Ayatollah Ali] Khamenei have been pushing for a strategy of ‘greater resistance,’ aimed at getting Washington to back off.” The Washington Institute referenced Iranian missile strikes at Islamic State bases in Syria in early October. Soon after those missile strikes, “the dollar’s value relative to the [Iranian] rial fell for the first time in many months, the world prices of oil rose, and the United States decided to withdraw Patriot missiles that had been protecting U.S. military forces in Bahrain and Kuwait.”

Although most observers saw these developments as unconnected to the Iranian action, the hard-liners begged to differ. On October 10, a Kayhan editorial, “Economic Security Through Missile Supremacy,” suggested that this reaction had led to extraordinary economic benefits: “The depreciation of the dollar and oil price rise demonstrated that the Iranian people’s resistance and the [Islamic Revolutionary Guard Corps’] missile launch had reversed the result of U.S. threats. More important, it proved that in the real field of international and regional confrontation, resistance is the only way to counter threats, not negotiation.”

Khamenei himself confirmed this mindset when he said, “Submission is much costlier than resistance.”

Since the Trump administration withdrew from the jcpoa in May and threatened to slap sanctions on Iran, Iranian leaders have beefed up their arsenal of missiles, threatened to shut down the Strait of Hormuz, admitted for the first time ever that they facilitated the travels of some of the al Qaeda terrorists responsible for the September 11 attacks, and allegedly plotted assassinations in France and Denmark, among many other malign activities. Hardly expressions of submission.

Indeed, the response from Suleimani to the sanctions has been fiery and personal. Earlier this week, he responded to Mr. Trump’s tweet about the upcoming sanctions with his own poster, declaring, “I will stand against you!”

Qasem Soleimani, the Commander of the Quds Force, Iran’s external security agency, has posted this image on his Instagram in response to Trump’s tweet. pic.twitter.com/l1zdRIBK9f

Such warfare could easily cause immediate political and economic damage to Iran’s enemies—especially Israel. Foreign Policy warned, “Once sanctions are back in full force, the United States needs to be ready for the worst.”

A Temporary Setback for Iran

Nevertheless, while Iran may indeed strike U.S. interests in the region, it is possible that the sanctions will temporarily curtail Iranian actions in the Middle East. As noted by Trumpet editor in chief Gerald Flurry in his article “Saving America From the Radical Left—Temporarily,” the election of Mr. Trump has led to a prophesied temporary resurgence of the United States both internally and abroad. Mr. Flurry wrote, “Donald Trump has proved himself willing to take a stand where others have not. It is quite something to behold him resisting these anti-American forces! … When you compare what this president is doing to what his predecessor did, there has been a clear change in direction, one that will slow the speed at which America is being pulled apart.”

It is logical to expect that the temporary saving of the U.S. will have knock-on effects internationally. Clearly, Mr. Trump’s change of direction has been a boon for the traditional Middle Eastern allies of the United States, Israel and Saudi Arabia, both of which have been given the green light by the U.S. to hit back at Iranian proxies in the region.

Furthermore, it is possible that these sanctions may indeed temporarily restrain Iran, at least in some arenas. Especially considering that some of the objectives on Secretary Pompeo’s list of 12 conditions fall in line with what the Bible says about Iran’s end-time position. Point nine specifically demands that the Islamic nation “withdraw all forces under Iranian command throughout the entirety of Syria.” As we have forecast since the beginning of the Syrian civil war, Bible prophecy indicates that Iran will lose its position of influence inside Syria. U.S. pressure could lead to that change. (For more on our long-standing forecast on Iran’s exit from Syria, please read “How the Syrian Crisis Will End.”)

Bible prophecy indicates that Iran will suffer some losses in the near future, but it also shows that Iran will not be making any changes in terms of its long-term strategy. Bible prophecy reveals that nothing short of overwhelming military force, not economic sanctions, will ultimately stop Iran’s aggressive foreign policy. That military force will come, not from the United States, but from a European power.

The most revealing scripture about this clash is Daniel 11:40: “And at the time of the end shall the king of the south push at him: and the king of the north shall come against him like a whirlwind, with chariots, and with horsemen, and with many ships; and he shall enter into the countries, and shall overflow and pass over.” Iran leads “the king of the south,” and Germany will lead “the king of the north.” Mr. Flurry proves those identities in his free booklet The King of the South. This booklet has been updated multiple times since it was first published in 1996, proving more and more emphatically how Iran is precisely fulfilling this prophecy. This understanding is so critical that we will mail you a free copy of this booklet if you would like one. You can also download a free electronic version of the booklet here.

The European “king of the north” will perhaps realize by the point of the Daniel 11:40 clash that mitigating the impact of sanctions on Iran doesn’t help change the behavior of Iranian leaders. It will perhaps realize by that point that the economic pressure of sanctions also doesn’t do much to change the behavior of Iranian leaders—not because sanctions are themselves inherently futile but because sanctions against radical Islamists who cherish “resistance” and martyrdom are ultimately futile.

Keep track of Iran’s response to U.S. sanctions and Europe’s increasingly uneasy relationship with the Islamic Republic. Request your free copy of The King of the South now to gain an advance understanding of the future!