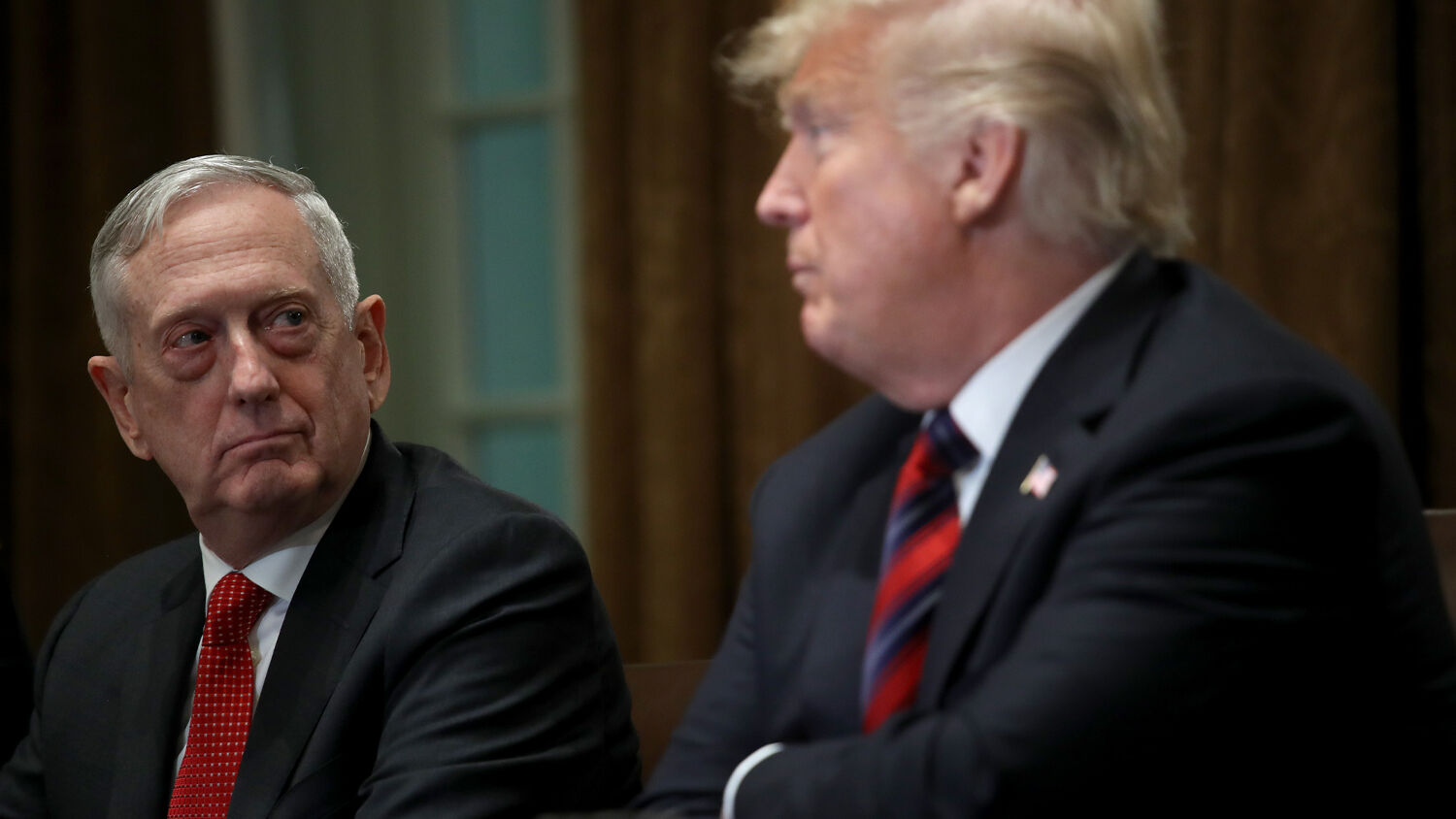 Can the American military prevent a second civil war?

What would America look like if its military split into hostile factions? What would happen if thousands of American troops refused to carry out the orders of their commander in chief? Or even took up arms against him? Nothing like this has happened in the United States since the Civil War. But today, more and more former defense officials are publicly accusing President Donald Trump of betraying his oath of office.

James Mattis, who is not only a prominent retired Marine Corps general but was also President Trump’s secretary of defense, had largely kept with the historic military tradition of not publicizing personal political views. On June 3, he broke his silence and issued a public statement condemning the president.

“Donald Trump is the first president in my lifetime who does not try to unite the American people—does not even pretend to try,” Mattis said in a statement obtained by cnn. “Instead he tries to divide us. We are witnessing the consequences of three years of this deliberate effort. We are witnessing the consequences of three years without mature leadership. We can unite without him, drawing on the strengths inherent in our civil society. This will not be easy, as the past few days have shown, but we owe it to our fellow citizens; to past generations that bled to defend our promise; and to our children.”

Mattis issued his statement after the president announced, “[W]e are ending the riots and lawlessness that has spread throughout our country. We will end it now. Today, I have strongly recommended to every governor to deploy the National Guard in sufficient numbers that we dominate the streets. Mayors and governors must establish an overwhelming law enforcement presence until the violence has been quelled. If a city or a state refuses to take the actions that are necessary to defend the life and property of their residents, then I will deploy the United States military and quickly solve the problem for them.”

For President Trump to use the military to disperse rioters would require him to invoke the Insurrection Act of 1807. This power was last used in 1992, when President George H.W. Bush used U.S. Marines to stop race riots in Los Angeles, California. Even though Mattis was a lieutenant colonel in the Marine Corps at the time, he claims Trump is the first president in his lifetime to divide people.

Whatever your views on President Trump, General Mattis, President Bush, the Insurrection Act, or the United States itself, sharp divisions between the commander in chief and the military during a time of national turmoil represents a threat to the stability of the nation—and of the world.

Other top retired generals and admirals are also condemning the use of military force to restore law and order to American streets: Army Gen. Colin Powell, Army Gen. Martin Dempsey, Navy Adm. Mike Mullen and Air Force Gen. Richard Myers. Their condemnations have been joined by those of former defense secretaries Leon Panetta, Chuck Hagel, Ashton Carter and William Cohen. All totaled, 89 former national security leaders have accused the president of “betraying” his oath of office by mentioning the Insurrection Act.

The current rioting in America may not be bad enough to require sending in federal troops. Still, the Insurrection Act has been invoked 11 times in the past century. It is both legal and constitutional for the president to use federal troops to put down “an insurrection in any state against its government … upon the request of its legislature or of its governor if the legislature cannot be convened.”

Deploying troops into America’s streets is a serious step. Overusing this measure would indeed threaten what is left of the U.S. Constitution. Understandably, citizens want to be sure that action is necessary. But the fact that so many former defense officials are openly accusing President Trump of sowing division in the nation illustrates that the U.S. military is divided.

The irony of Colin Powell’s condemnation of President Trump is that Powell was the chairman of the Joint Chiefs of Staff during the 1992 Los Angeles riots. He reportedly told President George H. W. Bush, “All you’ve got to do is say it.” He oversaw the deployment of 4,500 marines and soldiers into the city. But today, he says President Trump has “drifted away” from the U.S. Constitution for suggesting he could do the same thing.

Many political analysts are warning that political division in the U.S. is worse now than at any point since the Civil War. Other analysts say a conflict as devastating as the Civil War could not happen to the U.S. again, because the military would quickly put down the rebellion.

“Anybody unwise enough to seriously take up arms against Uncle Sam on home turf would be crushed overnight by the full might of our armed forces, which have 1.3 million men and women on active duty,” security expert John Schindler wrote in Observer. “Unlike in 1861, our states lack their own freestanding militias—despite lip service to state authority, our National Guard is fully integrated into the U.S. military—so there’s no force to even rebel against Washington. The notion that anybody could get even a brigade’s worth of organized troops to rebel against the feds is an online hothouse fantasy, not political or military reality.”

This assessment assumes that the U.S. military and National Guard are united and under the authority of the president. But is that true? Would America’s 1.3 million active-duty soldiers fight “anybody unwise enough to seriously take up arms against Uncle Sam on home turf”? Or would some of them like to see regime change?

During his first five years in office, former President Barack Obama fired at least 197 military officers, leading to speculation by active and retired military personnel that he was purging the military of ideological dissenters. Retired U.S. Army Maj. Gen. Paul Vallely told Investors Business Daily in 2013 that Obama was “intentionally weakening and gutting our military, Pentagon and reducing us as a superpower, and anyone in the ranks who disagrees or speaks out is being purged.”

It is hard to quantify political division in the U.S. military because officers generally do not publicly criticize their commander in chief until after they have retired. But a 2019 survey of 1,630 active-duty troops conducted by Syracuse University found that 50 percent of respondents had an “unfavorable” opinion of President Trump, compared to only 42 percent who had a favorable impression. The same poll found President Trump was more popular among the enlisted troops than among officers, with 43 percent of enlisted soldiers having a favorable opinion of the president, compared to only 33 percent of officers.

The fact that half the military disapproves of President Trump’s job performance is probably pretty standard for American politics. But at a time when Democratic politicians are encouraging race riots and former generals are accusing the president of betraying the Constitution for suggesting that the military could help put down those riots, this division represents a severe strategic vulnerability: disunity. This disunity is between the military and its elected commander in chief, and between the solders within the military itself.

Some of the groups behind the riots—like Antifa, Refuse Fascism, and the Revolutionary Communist Party usa—have openly stated their goal: to overthrow the United States government. What if these agitators stir up an insurrection so large that military troops are required to preserve America’s constitutional form of government? These groups are trying to tear down America’s constitutional system of government because they can’t build another one until that happens. Therefore they are trying to dissolve the glue of society by dividing the police from the people, the military from the people, the military from the commander in chief, the officers from the enlisted men, and the enlisted men from each other. The fact that 89 former national security leaders are publicly speaking against President Trump is a much more significant victory for these agitators than the establishment of the Capitol Hill Autonomous Zone in Seattle, Washington.

Is it true that anyone “unwise enough to seriously take up arms against Uncle Sam on home turf would be crushed overnight by the full might of our armed forces,” as John Schindler suggested? Or would certain troops sit this fight out or even take up arms on behalf of the protesters?

America is bitterly divided. Prominent observers are discussing the possibility of civil war, and one 2019 Georgetown University poll showed that two thirds of Americans believe the U.S. is “on the edge of civil war.”

Think about that for a moment. The Civil War took 620,000 American lives, about 2 percent of the nation’s population, and more deaths than all other American wars from the American Revolution to the Korean War combined. Could America be on the edge of another such catastrophe? Our technological capacity to kill is much higher now than it was in 1865. If the military split into hostile factions, the potential for mass violence is much higher today.

In Ezekiel 5, God reveals that one third of the population of end-time Israel will die from pestilence, famine and violence because they have committed abominations. “And I will do in thee that which I have not done, and whereunto I will not do any more the like, because of all thine abominations. … A third part of thee shall die with the pestilence, and with famine shall they be consumed in the midst of thee …” (verses 9, 12).

This sobering prophecy means that more than 100 million people will die in rioting and warfare in the United States. (Request your free copy of Ezekiel—The End-Time Prophet, by Trumpet editor in chief Gerald Flurry, for proof.)

You can see the fault lines of this seismic conflict forming.

Some people trust America’s military to preserve peace; others join right-wing militias or radically left groups like Antifa and the Democratic Socialists of America, which want to replace, rewrite or ignore the Constitution. As these trends continue to unfold, tensions are building and the rule of law is breaking down. For 100 million Americans to die in a civil war, the nation’s military will have to be broken.

The Prophet Micah warned that God would break America’s military power: “And it shall come to pass in that day, saith the Lord, that I will cut off thy horses out of the midst of thee, and I will destroy thy chariots: And I will cut off the cities of thy land, and throw down all thy strong holds: And I will cut off witchcrafts out of thine hand; and thou shalt have no more soothsayers: Thy graven images also will I cut off, and thy standing images out of the midst of thee; and thou shalt no more worship the work of thine hands” (Micah 5:10-13).

This is a literal, direct prophecy about this generation. Today, Americans worship the work of their hands. Because of this, God says that as America reaches the zenith of its military power, He will cut off its weapons systems and throw down its bases, in part by allowing radical ideologies to divide the troops. In many ways, God has already broken the pride of America’s power (Leviticus 26:18-19). But soon, He will break the very existence of America’s power!

Civil War President Abraham Lincoln famously quoted Jesus Christ when he said, “A house divided against itself cannot stand.” And it looks like America’s military may be as divided as the rest of the nation.

The grand lesson of all history is that the law of God is the only law that leads people to peace, unity and prosperity. As people seek unity with God, they also achieve agreement with each other. As political division and civil unrest grips America, as hostile foreign powers rise, it’s time to look to the same Bible Abraham Lincoln did and seek the Eternal while He may be found, and call upon Him while He is near!