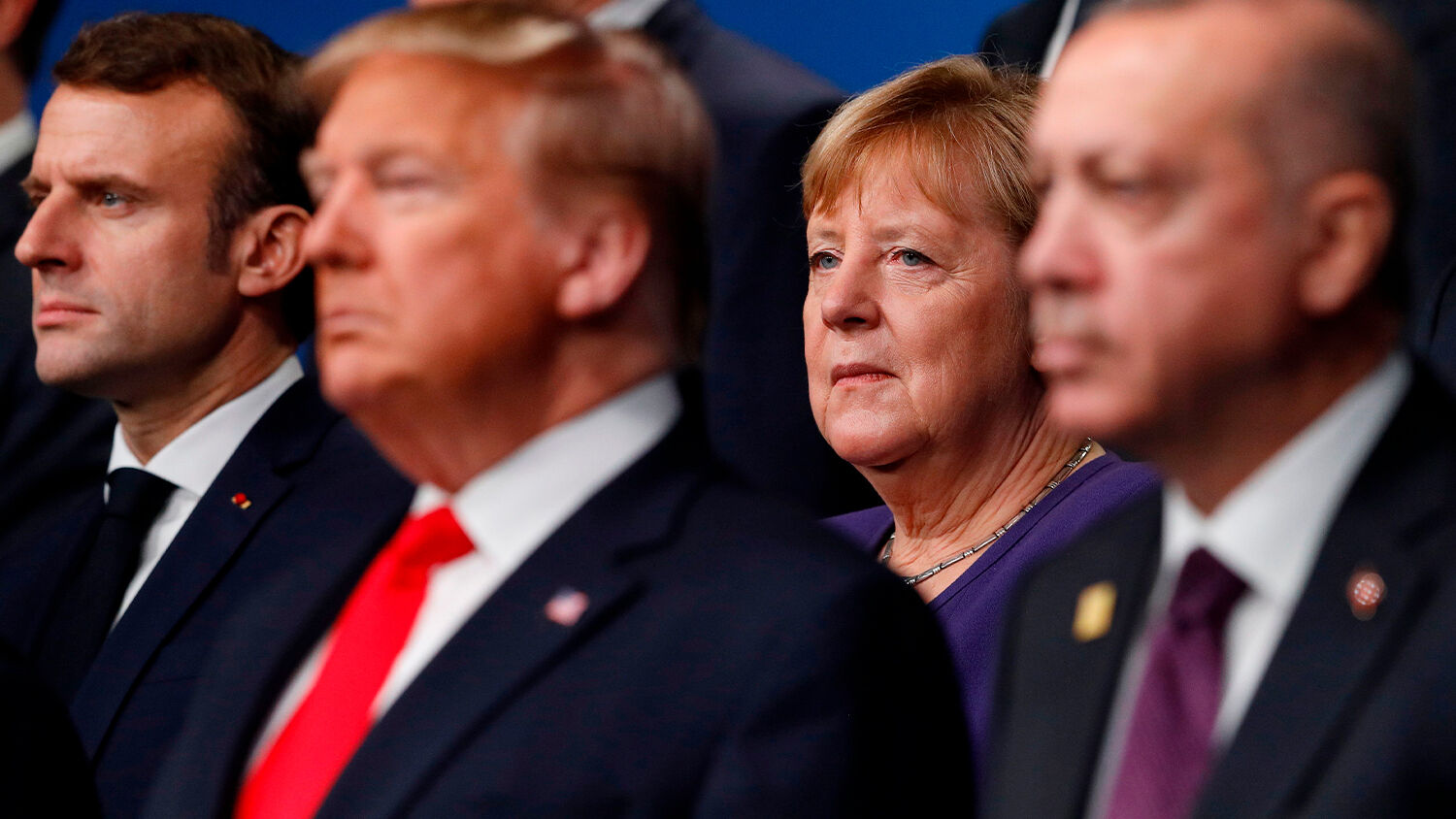 Last month, United States President Donald Trump invited world leaders to a rescheduled G-7 meeting to “be a great sign to all—normalization!” Most seemed eager to attend, until German Chancellor Angela Merkel shut it down.

“Officials aware of the trans-Atlantic discussions said Trump was furious over Merkel’s reluctance to attend the summit, and on Thursday, he phoned French President Emmanuel Macron in a pique,” Politico noted on May 29.

Many regard Chancellor Merkel as a voice of reason in a chaotic world. Yet her opposition to everything the U.S. president does is motivated by a source that will prove most destructive to the U.S.

Days after Merkel’s decision was announced, media reports claimed that President Trump ordered the withdrawal of 9,500 U.S. troops from Germany, without informing its ally. The German media and government officials were outraged as the White House neither confirmed nor denied the reports.

This is only one sign indicating relations between Chancellor Merkel and President Trump are deteriorating. Politico wrote: “In a call this week, the two leaders had heated disagreements on topics including nato, the Nord Stream 2 gas pipeline between Russia and Germany, and relations with China, according to a senior U.S. official, who declined to be named.”

Chancellor Merkel has often publicly disapproved of President Trump’s decisions and often sided with U.S. opponents. She endorses politicians, organizations and countries Mr. Trump has criticized. Why has she become such a vocal critic of the U.S. administration?

In a statement following Trump’s victory in November 2016, she said that the two countries were “linked by values of democracy, freedom, respect for human rights and dignity, regardless of origin, skin color, religion, gender, sexual orientation or political attitude.” She offered Mr. Trump a close cooperation “on the basis of these values.”

The first strong indication that Ms. Merkel and Mr. Trump would disagree came only days later. On his last visit to Europe as president, Barack Obama was heartily welcomed in Germany as a close friend. Obama, at the time, referred to Merkel as his “closest international partner.”

Days before, during his visit to Greece, Mr. Obama made clear that he and Trump “could not be more different.”

Their relationship with Chancellor Merkel could also not be more different.

Ms. Merkel’s positive relationship with Obama didn’t end after he left office. In May 2017, they held a joint public appearance in front of Brandenburg Gate. “In this new world we live in, we can’t isolate ourselves,” said Obama. “We can’t hide behind a wall.”

After their appearance, Firstpost noted on May 25, 2017: “Obama praised Merkel as someone who had done outstanding work, and defended his own presidency and the values of liberal democracy that both of them had championed.”

In the years since, Ms. Merkel has continued to defend Obama’s legacy.

In April 2019, they met again for an 90-minute-long private meeting. The topic of their discussion was more than likely Donald Trump.

Obama was in Berlin today to see Merkel. Looks like they got along a little better than Merkel and Trump pic.twitter.com/HmQ3Cu7fJR

In May 2019, Merkel said in a speech to Harvard’s graduating students, “I want to leave this wish with you: Tear down walls of ignorance and narrow-mindedness, for nothing has to stay as it is.” Clearly criticizing U.S. policy under President Trump, she said, “protectionism threatens the foundations of our prosperity.”

Merkel certainly knew her audience. Concerning Harvard’s class of 2019, the Harvard Crimson reported: “Well over half of survey respondents—68 percent—believe the country is headed in the wrong direction, and an overwhelming majority (92 percent) view President Donald Trump unfavorably. More than half of graduating seniors believe the president should be impeached.”

Merkel’s speech was well received by the graduates, Germany’s Die Welt noted: “The audience applauded Angela Merkel almost 30 times during her half-hour speech. During some passages, they applauded after each sentence. In so doing, the keynote speaker’s statements and the audience’s response combined formed a common message—directed against the policies of the American president, against the way in which Donald Trump operates.”

In the coronavirus crisis, Trump strongly criticized the World Health Organization (who) for spreading false information and acting as the long arm of the Chinese government. Ms. Merkel undermined his criticism significantly. “The chancellor stressed that the pandemic can only be defeated with a strong and coordinated international response,” said Steffen Seibert. “To this end, she expressed her full support for the who and numerous other partners.”

U.S. representatives Ilhan Omar, Alexandria Ocasio-Cortez, Rashida Tlaib and Ayanna Pressley have become some of the most vocal critics of President Trump’s policies. After taking much criticism, Trump suggested in a tweet that the congresswomen “go back and help fix the totally broken and crime infested places from which they came.”

When asked about the incident, Merkel said she distances herself from the comments and “stands in solidarity” with the congresswomen Trump “attacked.”

Germany is one of the strongest allies the U.S. has. But instead of focusing on cooperation, Chancellor Merkel has repeatedly undermined President Trump’s foreign-policy goals. It is crucial to understand what role former President Obama has had in all of this.

President Trump has been open in his criticism of the Obama administration. He has exposed the damage that resulted from Obama’s presidency. He has rejected key “achievements” of the previous administration, such as Obamacare, the Paris Climate Accord and the Iran nuclear deal.

The close friendship Ms. Merkel maintains with Obama strongly indicates that the two have joined forces to work against President Trump.

Following Trump’s decision to reject Obama’s 2015 Iran nuclear deal, officially called the Joint Comprehensive Plan of Action (jcpoa), Chancellor Merkel urged European leaders to uphold the deal. “We agreed that we should do anything to preserve the deal, the jcpoa. Germany is convinced that Iran should not acquire or have nuclear weapons,” she said during a joint press conference with Russian President Vladimir Putin in Moscow.

Merkel has repeatedly sided with President’s Trump internal and external enemies. She has thus risen as the chief defender of Obama’s foreign political legacy. In 2016, the New York Times put it this way: “As Obama Exits World Stage, Angela Merkel May Be the Liberal West’s Last Defender.”

But is siding with Russia, Iran and China really defending the liberal West?

It’s clear the U.S. and Germany are drifting apart, as forecast in Bible prophecy!

In The United States and Britain in Prophecy, late theologian Herbert W. Armstrong proved in detail that most biblical references to Israel apply to its modern descendants that have settled the U.S. and the British Commonwealth. He also explained that the descendants of ancient Assyria settled in modern-day Germany.

Assyria was among Israel’s chief enemies. Bible prophecy says this will be the case again in this end time. But Germany has been among the U.S.’s most trusted allies in recent years. For this reason, many have dismissed the Trumpet’s Bible-based predictions that Germany will turn against America. Yet these predictions are garnering more and more relevance.

Today, Germany and the United States could hardly disagree more. Despite the need for cooperation, hostilities are rising. In a survey conducted by the Kantar Public polling institute on behalf of the Körber Foundation, 73 percent of participants said they have a worse opinion of the U.S. today than they did before the coronavirus crisis. According to a 2018 survey by the same institute, 73 percent of Germans described relations with the U.S. as “somewhat bad” or “very bad,” but 70 percent of Americans said the relations were “somewhat good” or “very good.”

Many Americans still view relations with Germany favorably. Some even apologize for what President Trump is doing. Few, however, realize that Germany’s hatred for American policies is deeper than dislike for one man.

In World War ii, many of Germany’s cities were destroyed. Ever since, Germany has lived in the shadow of the United States. Some in Germany want revenge; some think it’s time for Germany to rise again and replace the U.S. as the world’s superpower.

It’s abundantly clear that many in Germany hate President Trump. They see those who voted for Mr. Trump as bigoted and evil. Though they may deny it, their hatred is really directed at America as a whole.

Where is this growing hatred for America really coming from? It’s not Barack Obama or Angela Merkel or Germany. And where will it lead? The Bible reveals the answers.

Ephesians 2:2 says that Satan stirs negative emotions in men. He is the cause of all hatred (John 8:44) and has deceived the whole world (Revelation 12:9). As Mr. Armstrong’s most-important book, Mystery of the Ages, explains, God has allowed this to happen so that man can learn some crucial lessons.

In this context, God prophesies that He will use modern-day Germany to punish Israel for its sins against Him. Ezekiel 23:9 reads: “Wherefore I have delivered her into the hand of her lovers, into the hand of the Assyrians, upon whom she doted.” Under the subhead “German Double Cross,” Trumpet editor in chief Gerald Flurry writes in his book Ezekiel—The End-Time Prophet:

Many may think it sounds unbelievable. But God has prophesied and warned that He will use a foreign nation to punish America for its sins. Concerning a parallel prophecy in Hosea, Mr. Flurry writes:

As Mr. Flurry explains in A Strong German Leader Is Imminent, when relations between the U.S. and Germany escalate, there will be a more fierce leader than Angela Merkel leading the German people. The fact that relations have already reached an all-time low under the moderate rule of Merkel should be alarming.

The recent hatred for America and its president must be understood in its prophetic context. Request a free copy of America Under Attack and read “America Has Been ‘Fundamentally Transformed’” to learn more about these prophecies, how they will be fulfilled, and the overall hope in this message.