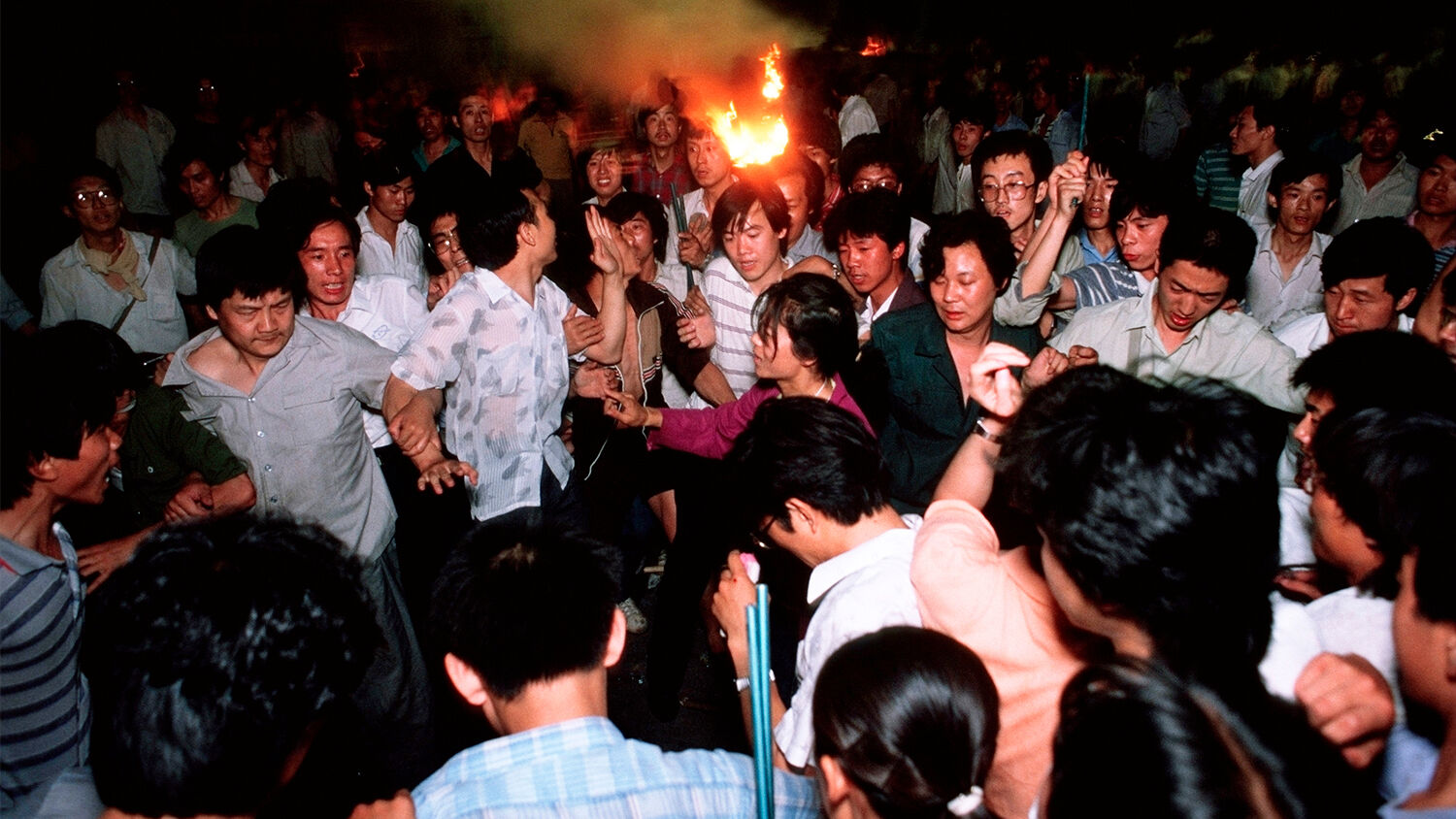 Pro-democracy demonstrators protest on Changan Avenue during the Communist Government’s bloody crackdown on students and protestors in and around Tiananmen Square.
Getty Images

The Chinese Communist Party mercilessly slaughtered thousands of its own citizens 31 years ago.

Chinese authorities unleashed a volley of criticism last week about the way some law enforcers in the United States have treated protesters and rioters. The most notable salvo came from China’s state-run Global Times, which posted a video of New York City police driving into a barricade and sending demonstrators sprawling, and asked: “Peacekeepers or mass murderers?”

The New York incident was disturbing. And though it did not cause any injuries, an investigation into it has been opened. But the fact that the People’s Republic of China is castigating another nation’s treatment of protesters during the anniversary week of the utterly barbaric Tiananmen Square Massacre cannot be ignored.

In early 1989, Chinese university students and other citizens began assembling in the square in central Beijing where they called out for the country’s authoritarian government to give China’s people greater freedoms and a voice in how they are governed. These people were driven by the hope that China could become a democracy and a land of opportunity and prosperity.

A look back at the #Tiananmen Square protests, in photos: http://t.co/kl6zbNqiAA pic.twitter.com/z1p8LXlCF4

As the protests spread into other Chinese cities, Chinese Communist Party (ccp) leaders began to fear that a revolution may be near. In mid-May, they declared martial law in Beijing and mobilized the People’s Liberation Army (pla) throughout the city. On the evening of June 3, the troops were ordered to advance to Tiananmen Square regardless of who or what may be in the way, and to clear the location by the next morning.

Jiang Lin was a 33-year-old pla lieutenant at the time. After staying silent about the bloodshed she witnessed that night in Tiananmen Square, she broke her silence last year in a landmark interview with the New York Times. “How could fate suddenly turn so that you could use tanks and machine guns against ordinary people?” she asked. Describing the slaughter of innocents that she witnessed, Jiang said: “It felt like watching my own mother being raped. It was unbearable. … The pain has eaten at me for 30 years.”

By June 5, the military had full control of Tiananmen Square and all of Beijing, and the ccp began immediately to rewrite the bloody history that had just occurred. Demonstrators had attacked the Army, provoking a reaction, they said. They also revised the number of protesters down drastically, and claimed that the death toll was minimal—only a couple hundred unruly people.

But a British diplomatic cable written that day exposes the massacre’s true scope and corroborates the testimony of Jiang and many other eye witnesses. “Minimum estimate of civilian dead 10,000,” the cable states, citing a highly placed Chinese government source. The cable, penned by Sir Alan Donald, Britain’s ambassador to China at the time, was only declassified in December 2017. And though its death toll estimate is disputed by China and some others, it is in line with U.S. intelligence estimates.

Sir Alan included some grusome details about the massacre. “Students understood they were given one hour to leave the square, but after five minutes apcs [armored personnel carriers] attacked. Students linked arms but were mown down. apcs then ran over the bodies time and time again … and remains [were] collected by bulldozer. Remains incinerated and then hosed down drains.”

He added: “One thousand survivors were told they could escape via Zhengyi Lu [a pedestrian avenue], but were then mown down by specially prepared M/G [machine gun] positions.” Sir Alan also included heartbreaking details about injured female students who begged for their lives but were bayoneted to death. And he wrote about a young mother who was shot dead as she attempted to assist her wounded 3-year-old daughter.

In the 31 years since this act of obscene barbarity took place, the ccp has tried to erase the massacre—and the calls for democracy that led up to it—from the history books. A percentage of Chinese people refuse to forget. In the early days of the Internet, they began using the code date “May 35th“ to talk to each other about what happened on June 4. This code originally prevented discussions from being flagged by China’s armies of censors. But now even “May 35th” is outlawed in all discourse inside the Great Firewall of China, and tools to locate and erase discussion of the massacre have achieved remarkable success. Anyone who brings it up can be flagged as an unemployable citizen. Anti-government protesters or political dissenters in China today face far worse.

Of course, none of this excuses any use of excessive force on the part of American law enforcement today. But for the ccp, of all governments, to sermonize about human rights abuses and “mass murderers” is the acme of hypocrisy. And on this 31st anniversary of the Tiananmen Square Massacre, the world should remember that the ccp has never apologized or expressed remorse for the broadscale savagery it authored that night. In fact, Chinese Defense Minister Gen. Wei Fenghe said last year that since the crackdown was against “political turbulence” it was “correct policy.” And this year, the ccp took a short break from criticizing the U.S.’s treatment of protesters to outlaw a vigil that Hong Kong has held each year to remember the Tiananmen Square Massacre.

Under Xi Jinping, the ccp continues to justify its brutality, tighten its hold on China, and violently stamp out internal dissent. The world should be sobered to see Xi’s China armed to the hilt and increasingly determined, not just to dominate the Chinese people, but also to project power well beyond China’s borders. We should remember what the ccp is willing to do to its own people to keep power, and realize how much more it would do to outsiders who threaten it.

The Trumpet closely watches China’s rise because Bible prophecy makes plain that as America’s influence on the world scene wanes, two main powers will rise up to take its place. One will be a European entity operating in the tradition of the Holy Roman Empire, and the other will be a bloc led by Russia and China called in Revelation 16:12 “the kings of the east.” The Bible shows—in such chapters as Jeremiah 50 and 51, Daniel 11 and 12, Matthew 24—that a clash between these two powers will contribute to the most violent conflict in human history—exponentially more violent than what the Chinese who sought democracy suffered 31 years ago last week.

This points to a terribly dark future that the world is entering into. But the Scriptures show that the season of darkness will be immediately followed by the brightest imaginable future. Our free booklet Russia and China in Prophecy explains:

Are you awake to what is really happening in this world? Think about this: The soldiers of Europe, Russia and China today are some of the same soldiers that will march from Megiddo to Jerusalem to be destroyed by Jesus Christ Himself!

That is how close we are getting to the end of this age of man! Are you ready for what is about to occur?

Revelation 19 describes Christ’s triumph over the evil forces of man. This victory ushers in the World Tomorrow, when Jesus Christ will rule this Earth with His saints! For 1,000 years, the world will blossom in abundant peace and prosperity!

To understand these prophecies, and the hope that is at their foundation, order your free copy of Russia and China in Prophecy.