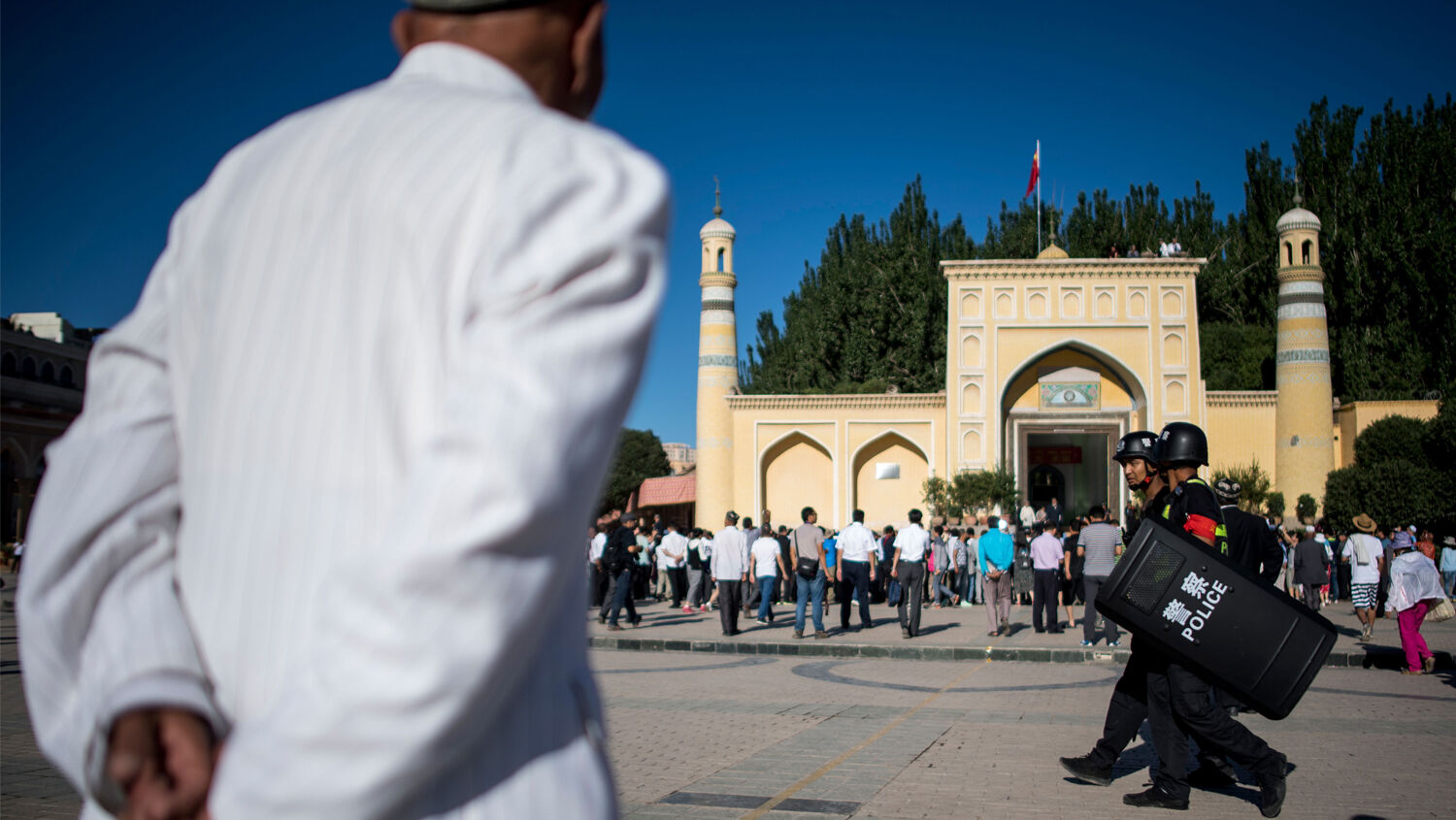 Muslim men arrive at the Id Kah Mosque for the morning prayer on Eid al-Fitr in the old town of Kashgar in China’s Xinjiang Uighur Autonomous Region.
JOHANNES EISELE/AFP/Getty Images

‘Those who are deceived by religious extremism … shall be assisted through resettlement and education.’

The United Nations has received credible reports that China is holding as many as a million ethnic minority Uighur Chinese and other ethnic minorities in internment camps for the purpose of “political reeducation.” The UN report, released August 10, said that the Chinese government has created what is essentially a “massive internment camp that is shrouded in secrecy.” The mass arrests amount to an ethnic cleansing campaign, a systematic attempt to snuff out religious dissent and political discord in China.

The Uighur ethnic group is primarily Muslim. More than 10 million Uighurs live in northwestern China in the autonomous Xinjiang region, an area with valuable oil deposits. However, the region has only been under Chinese control since 1949, and some Uighurs want their freedom back. Ethnic tensions there are high. After several incidents of violence in Xinjiang between Uighurs and Han Chinese (the largest ethnic group in China), the Chinese government cracked down on the Uighurs, blaming the violence on Islamic extremism.

In April, the United States Congressional-Executive Commission on China wrote a letter to the U.S. ambassador to China about the mass arrests of Uighurs. The commission, headed by Sen. Marco Rubio, called the situation in Xinjiang, “the largest mass incarceration of a minority population in the world today.” Up to 3 million Uighurs and other minorities, mostly Muslims, may currently be imprisoned in “counter-extremism centers” and reeducation camps in Xinjiang. A senior Chinese official, however, insisted last year that Xinjiang’s Muslims are the “happiest in the world.”

China’s Communist government strictly controls religion; religions not approved by the government are persecuted or banned. China officially recognizes five religions: Buddhism, Islam, Catholicism, Protestantism and Taoism. However, each of these religions is directly supervised and controlled by a state-run organization, such as the Patriotic Association of the Catholic Church in China, for example. Following a religion other than these five is a criminal offense. Only state-approved religious materials are allowed. Religious adherents can be arrested for possessing or distributing material that is not government approved.

On April 3, the Chinese government published an official document about “China’s Policies and Practices on Protecting Freedom of Religious Belief.” This paper was intended to promote China as a land of religious freedom. However, it declared that all “religions in China must be Chinese” (emphasis added throughout). Leaders of religious groups must “practice core socialist values, carry forward the fine traditions of the Chinese nation, and actively explore religious thought which conforms to the reality in China.” The government guides “religious believers to love their country and compatriots, safeguard national unity, ethnic solidarity, be subordinate to and serve the overall interests of the nation and the Chinese people.”

One way China does this is through reeducation camps.

Chinese Muslims who have been released from reeducation camps tell stories of being arrested because they showed signs of “extremism.” These signs can include wearing Islamic-style clothes, having a long beard or a Muslim name, praying at a mosque more than once a week, being caught with religious content like Koranic verses on a mobile phone, or sending nongovernment-sanctioned religious materials to other people.

A former instructor from one reeducation camp in Xinjiang explained how the process works. Once arrested, religious prisoners often sit in jail for days, weeks or months before they are taken to reeducation camps, where they are forced to watch hours of propaganda videos denouncing extremism. They are required to memorize and recite pro-Communist Party slogans, songs and chants. Muslim prisoners must repeatedly apologize for and criticize their religious beliefs, saying, “We have done illegal things, but now we know better.” Sometimes, Muslims are forced to violate their religious beliefs by eating pork or drinking alcohol. Instructors question detainees constantly: “Do you obey Chinese law or sharia? Do you understand why religion is dangerous?” Wrong answers lead to punishment.

China officially denies the existence of these detention camps. Hu Lianhe, Chinese delegate to the United Nations, told the UN on Monday, “The argument that 1 million Uighurs are detained in reeducation centers is completely untrue. … [T]here is no suppression of ethnic minorities or violations of their freedom of religious belief in the name of counterterrorism.” But he also said that “those who are deceived by religious extremism … shall be assisted through resettlement and education.”

Although China denies the camps, a state-run Chinese journal ran a story in June 2017 about how successful reeducation camps are. Of the 588 people surveyed who had been placed in Chinese indoctrination camps, none of them understood why they had been arrested initially. By the end of their internment, 98.8 percent of them said that they had “learned their mistakes.” AP News quoted one Chinese researcher as saying that transformation through education “is a permanent cure.”

Few hard facts are known about these camps. Most of those who are released are afraid to talk about their experiences. They fear retaliation against themselves or their families. However, credible witness testimonies have emerged that allege malnutrition, cruelty, beatings, torture and death in some of the jails and camps. One survivor told AP News, “I still think about it every night until the sun rises. I can’t sleep. The thoughts are with me all the time.”

Islam isn’t the only religion targeted. In 2017, China declared that Christianity was a “national security threat.” Chinese Christians have been told to replace Christian symbols in their homes and businesses with images of Xi Jinping. This month, the Chinese government commanded that all religious buildings fly the Chinese national flag outside their facilities. Many informal “house churches”—private homes and unofficial buildings where religious observers hold services—have been targeted and destroyed.

In April, Bibles disappeared from nearly all websites in China. Searches for Bibles on websites like Amazon now return no results. The government has remained silent about what has caused this phenomenon. Some online sellers privately told cnn that it is now illegal for them to publicly sell the Bible on these sites. A spokesperson for Amnesty International told cnn, “[There is] a broader trend under President Xi Jinping to more tightly control religion, especially Christianity. It’s absurd that the government claims to promote religious freedom at the same time that they’re banning the sale of Bibles.”

One source told the Miami Herald, “Xi is a closet Maoist—he is very anxious about thought control. He definitely does not want people to be faithful members of the church, because then people would profess their allegiance to the church rather than to the party, or more exactly, to Xi himself.”

Mao Zedong ruled China as chairman of the Communist Party for decades, exercising authoritarian rule, establishing a cult of personality, “reeducating” dissenters, and killing somewhere between 30 million and 70 million people.

Under President Xi Jinping, China’s most powerful leader since Mao Zedong, believers are seeing their freedoms shrink dramatically even as the country undergoes a religious revival. Experts and activists say that as he consolidates his power, Xi is waging the most severe systematic suppression of Christianity in the country since religious freedom was written into the Chinese Constitution in 1982. …

“Chinese leaders have always been suspicious of the political challenge or threat that Christianity poses to the Communist regime,” said Xi Lian, a scholar of Christianity in China at Duke University. “Under Xi, this fear of Western infiltration has intensified and gained a prominence that we haven’t seen for a long time.”

The camps aren’t the only factor in Xi’s crackdown on religion. As Trumpet writer Richard Palmer wrote recently, China is a now a “1984-style surveillance state.” The government can use its unprecedented surveillance powers to crack down even more on “religious extremism.” The Washington Post wrote that the Chinese government uses these powers particularly in Xinjiang, creating “all-encompassing monitoring” that “rates people’s loyalty to the Communist Party in order to control every aspect of their lives.”

Since coming to power in 2013, Xi has cemented his control over the Chinese government. In March this year, the Communist Party announced that it was abolishing term limits for the president, meaning that Xi can rule China for as long as he pleases. As long as Xi, who is also the head of the Communist Party of China, sees religion as a threat to China’s Communist values, his campaign of religious persecution is likely to continue. For religious and ethnic minorities like the Uighurs, displaying convincing support for Communist ideals to the police, the common passersby and potential spies is the only way to remain safe. These stories of religious persecution show the character of the rising Chinese state and its powerful strongman.

The Bible prophesied that in the end time, Gentile powers like China would rise to prominence. This trend is especially evident today in the rise of powers in the East, including China, Russia and Japan. In the January 2014 issue of the Trumpet, managing editor Joel Hilliker wrote about this time, which the Bible terms the “times of the Gentiles” (Luke 21:24):

Christ prophesied that we are about to enter a time when America’s and Britain’s global influence will be snuffed out, and Gentile powers—that is, non-Israelite nations, specified in other prophecies—will wreak unimaginable havoc on the Earth. Jerusalem, the literal city located in modern-day Judah, will be “trodden down of the Gentiles.” Revelation 11:2 also shows how the Gentiles shall “tread under foot” the “holy city” for 42 months, or 3½ years. But Bible prophecy also uses Jerusalem, the capital of ancient Israel, to symbolize all of modern Israel—chiefly the Americans and the British. …

Soon we will look back upon the problems making headlines today and recognize that they were merely, as Jesus Christ termed it, “the beginning of sorrows.”

The time for complacency is past.

The times of the Gentiles are upon us.

Xi’s “thought control” campaign is just one disturbing aspect of these times of the Gentiles. This is what the times of the Gentiles look like: thousands of people in forced reeducation camps, state-controlled religion, violence and persecution under the guise of protecting the state. This is a small foretaste of the kind of conditions that will soon exist around the world. However, as Mr. Hilliker wrote:

This seismic shift in geopolitical momentum—away from America and toward a clutch of non-Israelite, Gentile powers, accompanied by an escalation in brutal violence and war—is actually good news, ultimately. It is one of the signs Jesus Christ gave of His imminent return!

The darkness and evil that are about to flood this globe presage the most wonderful news in human history!