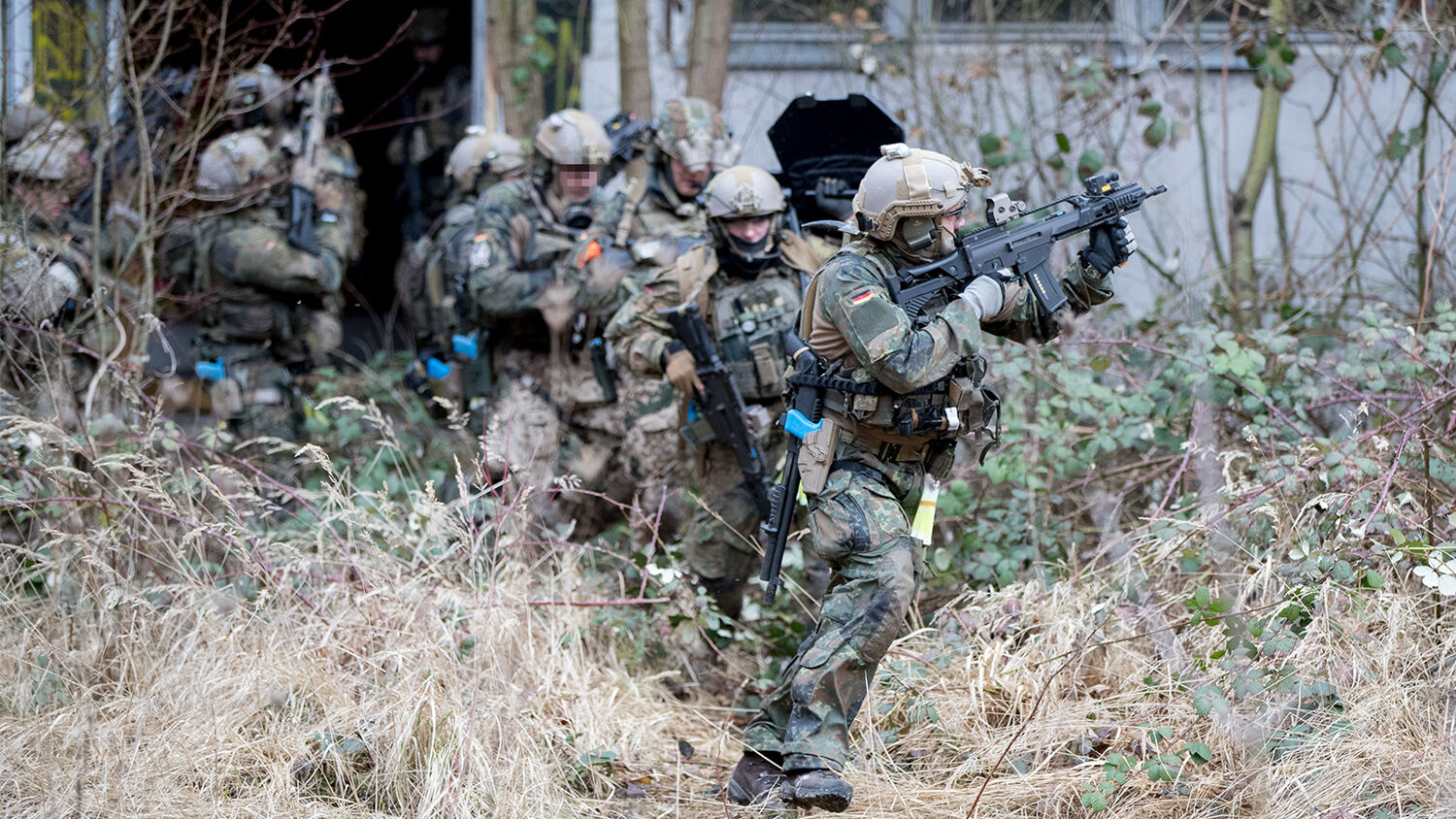 The Bundeswehr’s affinity for Nazism is revealed—again.

Germany’s elite commando unit, the Special Forces Command (ksk) has been rocked by yet another scandal. A warrant officer, identified only as Philipp S., was arrested last week after weapons, ammunition and Nazi regalia were found in his home.

The ksk is Germany’s crack military unit, whose numbers are kept secret but are estimated to be just over 1,000 troops. It is usually deployed for the most dangerous and daring missions, and it has a sterling reputation for efficiency and thoroughness.

However, this reputation is being tarnished by the recent discovery of widespread radicalism of officers in the unit. Soldiers have been accused of all manner of right-wing acts, from Nazi salutes and owning Nazi regalia to stockpiling Army-issue weapons and threatening to assassinate left-leaning politicians.

Philipp S., in particular, was placed under investigation in 2017 after giving a Hitler salute at a party. He was arrested two weeks ago after police found an assault rifle, 2 kilograms of explosives, smoke grenades, thousands of rounds of ammunition and Nazi memorabilia in his home.

Having had at least 20 personnel recently investigated for suspected extremist activities and neo-Nazi loyalties, the German military intelligence service believes that the ksk is a “hotbed of the far right.”

Brig. Gen. Markus Kreitmayr agrees, calling this “the most difficult phase” in the Army’s history. “In the midst of us there were and are, obviously still are, individuals from the so-called far right,” he said.

Indeed, after Philipp S. was seen giving the Hitler salute, he was suspended from the ksk and fined. Soon after, however, he was reinstated. Two years later, he has been arrested with proof of the persistence of his ideology.

The topic represents a “shocking nadir” for postwar Germany and its armed forces, according to General Kreitmayr. He has vowed to root out the extremists and Nazi sympathizers from the ksk and the Army as a whole. But the big concern is that those harboring far-right ideologies might outnumber those who do not. Recent discoveries prove that this is not far-fetched.

The Bundeswehr, or German Army, as a whole has been dogged by the same accusations in the last few years. Trumpet contributor Josué Michels reported on the approximately 550 members of the Bundeswehr being investigated for right-wing extremism. In 2019, an additional 360 cases were added. The ksk is believed to have a rate of extremism five times higher than that of the Bundeswehr.

As Michels asked, “If the elite forces and a few hundred army soldiers openly show their extremist mindset, how many harbor it secretly?” Philipp S. is not a one-off. He is just one of many anonymized members of the Army who have been discovered with Nazi sympathies. Der Spiegel rattles off names—Franco A., Maximilian T., Ralf G., among others—and tells the stories of soldiers in the Bundeswehr found to belong to the far right.

Like Philipp S., they were prosecuted for their views, and yet maintained them. How many fellow soldiers knew of their beliefs and yet did nothing. Furthermore, how many knew of those beliefs and sympathized?

In 1998, the Bundestag concluded that about 10,000 members of the Army belonged to the far right. Even terrorist groups have been thriving undetected in the Army. Der Spiegel wrote that what is most concerning is that such ideologies and groups “could have remained undetected by a constitutional organization that has the task of protecting democracy with a weapon if necessary.”

The story of Philipp S. is a worrying one. After he made a Hitler salute three years ago at a private party, how many people were upset by his actions? How many were comfortable with what he did? How many share his beliefs and values? He stayed in the task force and maintained his ideological leanings, to an apparently radical degree. Now that he has been arrested, how many are simply hiding those beliefs from view rather than eliminating them?

Herbert W. Armstrong, editor in chief of the Plain Truth, predecessor to the Trumpet, had an answer to these questions in 1945, when the world believed the Nazi threat had been eliminated. He wrote:

We don’t understand German thoroughness. From the very start of World War ii, they have considered the possibility of losing this second round, as they did the first—and they have carefully, methodically planned, in such eventuality, the third round—World War iii! Hitler has lost. This round of war, in Europe, is over. And the Nazis have now gone underground. In France and Norway, they learned how effectively an organized underground can hamper occupation and control of a country. Paris was liberated by the French underground—and Allied armies. Now a Nazi underground is methodically planned. They plan to come back and to win on the third try.

The frequency of radical elements being uncovered in the German Army, once considered to be isolated incidents, has increased. This trend can be traced over the last few decades.

Trumpet editor in chief Gerald Flurry writes in his booklet Germany and the Holy Roman Empire, “There were 72 right-wing incidents in the German Army in 1996. This number had climbed to 135 in 1999 and jumped to 196 in 2000. One particular outrage occurred in the small German town of Detmold. Uniformed German soldiers, while shouting, ‘Wogs out of Germany,’ attacked two Turkish immigrants and a 16-year-old Italian boy with baseball bats and knives. … German officials continue to downplay neo-Nazi-related activities within the Bundeswehr. But how much longer can they keep saying that such events are only ‘isolated’ cases—especially when statistics reveal an upward trend in violent incidents?”

As Mr. Armstrong warned decades ago, Nazism is making a comeback. Today we can see how right he was.

How did he know that Nazism would make a resurgence, at a time when the whole world thought it had been quashed forever? Because his primary source of intelligence was Bible prophecy. It reveals that the machine behind Nazi Germany, which many believed was destroyed at the end of World War ii, simply went underground.

Revelation 17:8 and 10 state: “The beast that thou sawest was, and is not; and shall ascend out of the bottomless pit, and go into perdition: and they that dwell on the earth shall wonder, whose names were not written in the book of life from the foundation of the world, when they behold the beast that was, and is not, and yet is. … And there are seven kings: five are fallen, and one is, and the other is not yet come; and when he cometh, he must continue a short space.”

In the Prophesy Again booklet, Mr. Flurry explains that this beast power is referring to the Holy Roman Empire. It has had six distinct periods of dominance over the last 1,500 years. Mr. Armstrong was alive during the sixth period when “God revealed to him secrets about this sixth resurrection of the Holy Roman Empire, which ‘was, and is not, and yet is.’” This was under the Hitler-Mussolini axis.

When the Allies won the war, this beast power disappeared from the scene. But the Bible shows that this was only a temporary disappearance. This truth was revealed shortly after the Axis powers had lost—at a time when the beast “is not” in power anymore. But the Bible also says, “it is.” Mr. Flurry explains: “[A]s Mr. Armstrong preached time and again, they just went underground—into ‘the bottomless pit.”‘

When it reemerges, this force will be the seventh and final head of the beast power, which Revelation 17:10 says “is not yet come.” What is happening in the German military today is a clear sign that the reemergence is beginning. It is proof of the fulfilment of that prophecy, and the seventh resurrection of the Holy Roman Empire!

These prophecies are real. A look today at the Bundeswehr, and the world as a whole, shows that these are not normal times. So much uncertainty reigns. But the Bible is sure. Request your free copy of Germany and the Holy Roman Empire to prove these prophecies and to see where they are leading.