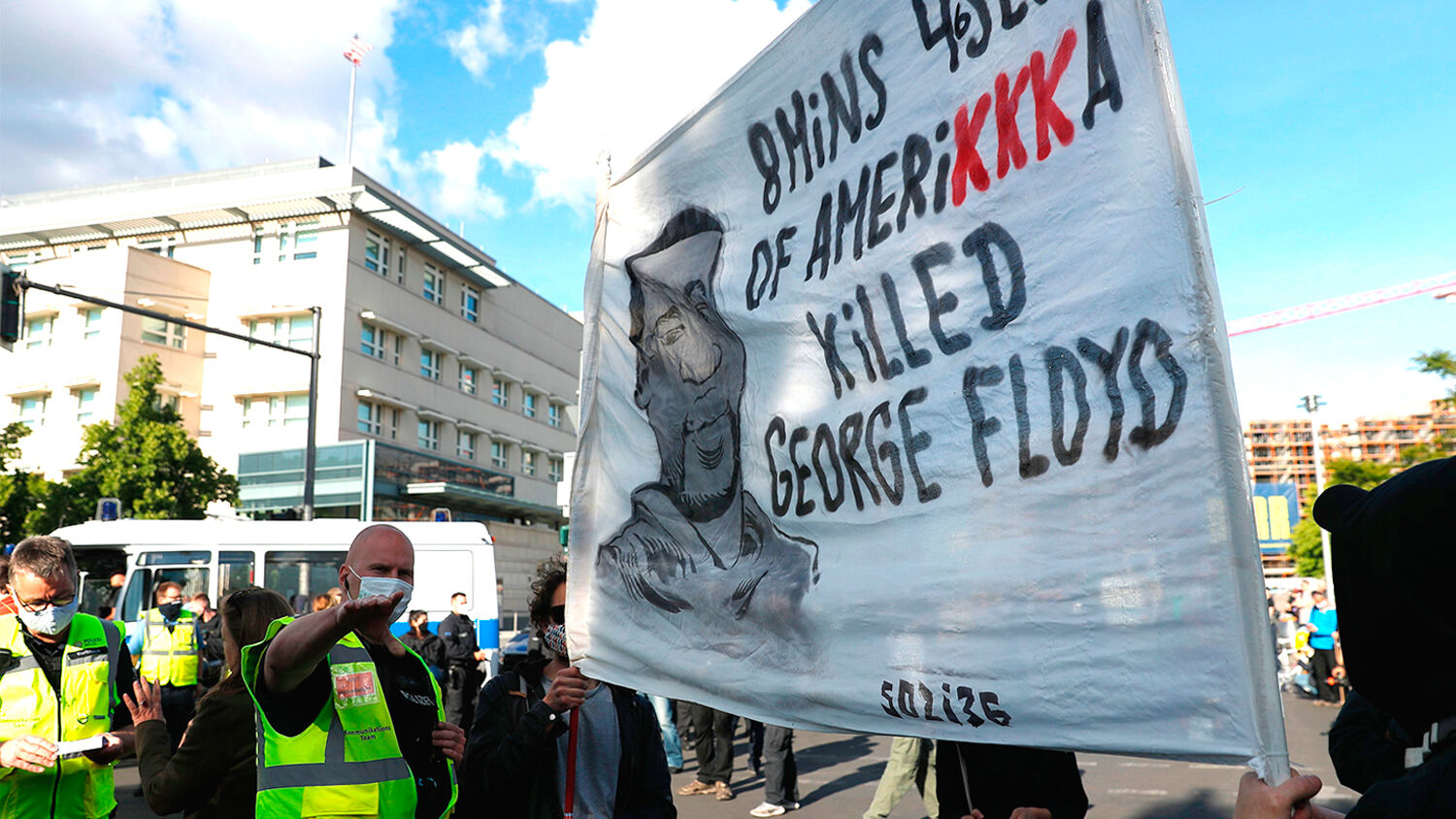 Protesters gather over the death of George Floyd in front of the U.S. Embassy in Berlin, on May 30.
AFP/Getty Images

‘There is great outrage in Germany about the violent death of George Floyd.’

Following the violent death of an African-American in Minneapolis, protests erupted throughout the United States—and, in an unprecedented development, even the world.

More than a thousand protested in Berlin. “There is great outrage in Germany about the violent death of George Floyd,” Spiegel Online reported on May 31 (Trumpet translation throughout).

Over the weekend, 1,500 people marched against the “ongoing police brutality” in the U.S. and the “global pandemic called racism,” in Kreuzberg, Germany. Only 100 participants were anticipated. A “memorial march against racist police violence in the U.S.” flocked before the Brandenburg Gate that had 200 participants, 125 more than previously announced. Another 2,000 protested in front of the U.S. Embassy in Berlin on Saturday.

Various articles on the issue paint the U.S. as unabashedly racist, and pin the blame squarely on U.S. President Donald Trump. An opinion piece in Germany’s Tagesspiegel stated: “Trump reaps what he fertilized well. The racism that brought him into office should secure his reelection. He has nothing else.”

Yes, the German media has reminded readers that the U.S. has dealt with this issue for years. “It’s true: Racism in the United States didn’t just start since George Floyd was brutally killed by four white police officers in Minneapolis,” it wrote on June 2. “It is open and hidden, systematic and systemic. If you want to see it, you can see it. If you don’t want to see it, you won’t see it.”

Many in the U.S. who believe racism is “systematic and systemic” are trying to overthrow the system with force: burning police cars, looting shops, besieging the White House—all in the name of social justice. While they may see this as the only way to solve the problem, the German media doubt the problem can be solved. Faz.net wrote in “America’s Eternal Trauma”:

It has been the eternal American theme since the first black-skin enslaved people were dragged to the continent they never wanted to enter. That was 400 years ago and the legacy is still inscribed on their bodies. That is the one side that grows on anger, despair, hopelessness. The other is that of the institutions. Where is the party that is committed to resolving these structures? What are the Democrats doing?

The underlying belief is that the American system is racist at its core.

As America burns, Germany seems to be enjoying its self-conferred status as America’s moral superior.

Following a report that Deutsche Welle journalists were kept from freely reporting in Minnesota, German Foreign Minister Heiko Maas said: “Democratic states under the rule of law have to meet the highest standards when it comes to protecting freedom of press. Any violence that occurs in this context not only has to be criticized—above all it has to be properly followed up and investigated so that journalists are protected when they are doing their work.”

Is Germany now responsible for ensuring that values such as freedom of the press are upheld in the U.S.? Wasn’t America the nation that helped institute those rights within Germany following World War ii?

Would Germany even be a democratic nation today without U.S. involvement? Yet here we see Germany judging its former judge, teacher and ruler.

It is rather rich to see Germany’s sanctimonious reaction to the death of George Floyd. Germany itself is facing a reemergence of right-wing extremism, including within its high-ranking police and army officers. But this trend is not receiving nearly as much coverage.

Last week, Germany had more than 2,000 anti-Semitic crimes, a 13 percent increase over the the previous year.

How many people have heard this statistic? How many have marched the streets to protest Germany’s recurring problem with anti-Semitism?

In October 2019, a right-wing extremist tried to shoot down the door of a fully occupied synagogue in Halle, Germany. After his attempts failed, he shot a woman on the street and a man in a Turkish snack bar.

This attack cast suspicion on the German police, but it received little attention. “A surveillance video of the attack on the synagogue in Halle raises questions about the police action,” mdr.de noted on February 9. “Among other things, the video shows that the perpetrator returned to the synagogue when the police were already on site. Nobody stopped him.”

Synagogues in Germany are generally under police protection. That alone is a sad fact, as German Chancellor Angela Merkel has noted. But the Halle synagogue was not protected by the police on October 9. This was the day the Jews celebrated Yom Kippur, one of the highest Jewish holidays. Naturally one would expect an increased police presence. What happened? Did the police know about the planned attack in advance and vacate? No serious investigation is underway.

Germany’s recurring problem with racism also affects its military, which in the past systematically killed Jews and foreigners. Shouldn’t we be concerned that similar sentiments are rising? Germany is so outraged about American police brutality, but shouldn’t it work to ensure its military doesn’t repeat its own history?

Germany’s Military Counterintelligence Service (mad) is investigating around 550 cases of suspected right-wing extremism in the army. In 2019, 360 cases were added to the investigation, Christof Gramm, president of mad, told the German newspaper Welt am Sonntag. Just last week, an officer from Germany’s Special Forces Command (ksk) was arrested after weapons, ammunition and Nazi regalia were found in his home.

Where is the global outrage over these incidents?

It is true that the U.S., like many nations, once had a problem with slavery—but it is also true that it overcame this particular problem. Germany, however, has far more recently had a much larger problem with anti-Semitism—and every indication is that this problem still exists.

Certainly America is not above reproof. But who made Germany America’s judge?

What about the refugee crisis? Germany has seen a drastic increase in xenophobic attacks. In 2016, Ulrich Lilie, president of Diakonie, one of the largest Christian charities in Germany, said: “We are witnessing the worst wave of racist and right-wing violence in 20 years.” Where were the mass protests warning of reemerging German nationalism?

That year, 2016, the Interior Ministry recorded 3,533 attacks against refugees in Germany. This exceeded the record set in 2015, when the refugee crisis was at its peak. Of these attacks, 988 were directed against refugee accommodations.

How many marched in protest when refugee accommodations were set ablaze, or when the fire brigade was hindered from doing its job?

Greece recently used its military to prevent refugees from crossing its borders. How many are calling Europe’s actions in the refugee crisis racist? How many say the European system has a “systematic and systemic” problem?

For decades, America has tried to rid itself of any form of discrimination and racism. It has become one of the most multicultural countries in the world. It is here that the idea of tolerating different cultures and races has become mainstream in the past century.

Germany, one needs to be reminded, fought for a completely different outcome just over 75 years ago.

Yes, the U.S.’s history of slavery is shameful, but of course, Germany is responsible for the death of 60 million in a war that was motivated by racial hatred. Six million Jews were systematically killed by Germany’s security forces. Blacks, Hispanics and other races were persecuted and killed in German concentration camps.

It is human nature to accuse others of one’s own fault. Germany apparently sees flaws in other nations but keeps its eyes closed to its own. As Tagesspiegel noted: “If you want to see it, you can see it. If you don’t want to see it, you won’t see it.”

Granted, there has been some level of self-examination on the part of prominent Germans watching the crisis in America.

Deutsche Welle’s Chiponda Chimbelu, reflecting on the killing of George Floyd, wrote, “There’s no relief for me that I live in Germany.” It’s a moment for Europe to reflect on its own racism, he added.

“A year ago, [the politician] Walter Lübcke was murdered,” Maas tweeted. “About 100 days ago, the attack was in Hanau. Right-wing extremism and racism kill. When we look at the United States, we have to be clear: Hate doesn’t just kill there—hate also kills here. Let’s face it together.”

Chimbelu was asked by one of his German friends if he were “actually happy not to live in the U.S. at the moment?” In his article, he responded:

Just because we aren’t reading about deaths doesn’t mean that racism isn’t a problem in Europe as well. There’s no race to the bottom when it comes to any form of injustice. We can best show our solidarity by naming George Floyd and discussing racial injustices and how they affect people’s lives in our own societies, so that we can prevent them.

This is a crucial perspective we would all do well to have.

Even more crucial is what the Bible reveals about this trend of blatant anti-Americanism. In America Under Attack, Trumpet editor in chief Gerald Flurry explains in detail why the U.S. has become the focal point of so many bitter attacks.

“Today many of the world’s most influential countries, institutions and organizations are brazenly anti-American,” theTrumpet.com managing editor Brad Macdonald noted in “The Global Ambition to Destroy America and Its President.” He continued: “Everyone knows Russia and China consider the U.S. an adversary, and that Germany and France are taking on the same view; but even America’s relations with traditional allies such as South Korea, the Philippines and Japan are deteriorating.”

Mr. Macdonald explained the extraordinary hatred for the United States. Then he quoted America Under Attack: “We are seeing the aftereffects of a calculated, aggressive, satanic attack aimed at weakening and ultimately destroying the nations of Israel, starting with the world’s most powerful nation!”

The nations of Israel refer today to America and Britain primarily (request a free copy of The United States and Britain in Prophecy, by Herbert W. Armstrong, to learn more).

The Bible prophesies of this hatred for America. And it shows in Psalm 83 that the primary assault against the U.S. will come from a German-led European empire.

2 Kings 14:27 prophesies of an attempt to “blot out the name of Israel from under heaven ….” As Mr. Flurry explained, this refers to an attempt from within the U.S. to destroy America. Psalm 83 prophesies that various nations under Germany’s leadership will unite, saying: “Come, and let us cut them off from being a nation; that the name of Israel may be no more in remembrance” (verse 4).

Hatred is boiling in Germany and around the world toward the U.S. This hatred has been prophesied. God reveals that He will use Germany to punish Israel for its sins against Him (Isaiah 10:5). This prophecy is explained in detail in Isaiah’s End-Time Vision (free upon request).

Israel was given the chance to lead the world in righteousness, but it has rebelled against God and led the world in wickedness. What we see today is the tragic result of that sin. It is leading to a civil war that will cascade into an even more devastating world war.

But God’s punishment will bear fruit: amid this devastation, many within the nations of Israel will be led to repent and turn to God.

In the midst of outrageous world events and a frenzy of reporting, it is important to understand what the Bible reveals about these events. To learn more about these prophecies, read “The Global Ambition to Destroy America and Its President” and request America Under Attack, by Gerald Flurry.