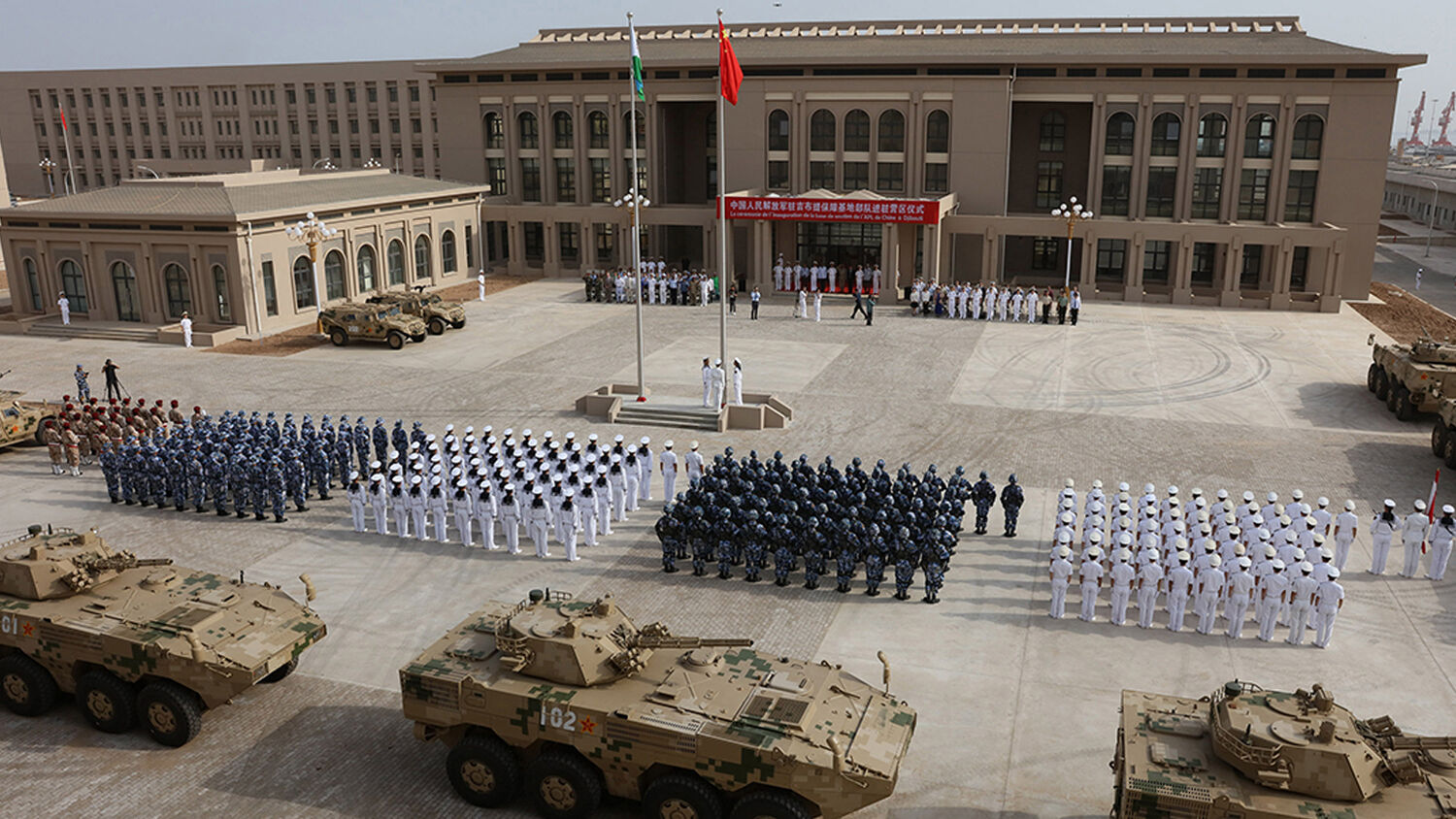 Baltic Fleet vessels in ceremonial formation at a rehearsal of the navy parade to mark the 70th anniversary of Victory in the 1941-1945 Great Patriotic War, May 7, 2015 in Baltiysk, Russia.
STR/AFP via Getty Images

Beijing continues to push the U.S. out of East Africa and soon out of global trade.

China has completed a massive extension on its military base in Djibouti, the Times reported on May 19. With its size, it is now China’s first permanent overseas military port able to accommodate aircraft carriers. And with the strategic location of Djibouti on the mouth of the Red Sea, China will now have an even more sizable presence in the Arabian Sea, Persian Gulf and Indian Ocean, along one of the world’s busiest shipping routes.

The majority of the work on a massive 1,100-foot pier was completed late last year. It is the main development that now allows China to accommodate aircraft carriers, large warships and nuclear-powered attack submarines. Further excavations point to the construction of a second pier.

Recent satellite images of #China’s support & logistics base in #Djibouti show how development work has carried on at the site through #Covid19 with new #PLAN modifications taking shape in the horn of #Africa https://t.co/mdGsDJDRY2 pic.twitter.com/2yFlpXFJBs

Another impressive aspect of this new construction is not its capacity for aircraft carriers and warships, but the magnitude of the base itself. The Asia Times even compared it to the “Great Wall of China” because of its sheer size.

The base doesn’t just look imposing, it has been designed to be highly defendable on a scale rarely seen in war zones. According to Forbes, while China has never had its bases attacked by insurgents, this new base’s defensive construction points toward having learned the lesson from Western forces being attacked in Afghanistan and Iraq.

An invader approaching via road would have to pass through an automated gate, take sharp turns—ideal for slowing down vehicles—and pass two vehicle checkpoints and pop-up vehicle barriers, all before reaching large concrete doors. Circumventing the road would mean being met by fences with razor wire before approaching wire-frame walls filled with gigantic sandbags, known as “Hesco” barriers.

For perspective, Western forces in Afghanistan use these barriers as the main fortifications; here, they are just the outer wall.

Inside the Hesco barrier is the main concrete wall, complete with crenellations, gun loops and tall towers. Every side of the base is substantially built, even the water side, which has significant security fences and guard forces, stationed marines, infantry vehicles, anti-tank missiles and automatic cannons.

Many countries have bases in Djibouti, but none so strategically located or as heavily fortified. Even America’s base at Camp Lemonnier pales in comparison to China’s.

This massive base was China’s first overseas, but it appears it will not be the last.

According to the Times, China is intent on developing more strategic facilities, allowing it to base parts of its navy in key parts in the world. This Djibouti base at the mouth of the Red Sea is opposite another heavily financed Beijing base at the port of Gwadar in western Pakistan. The Times added that China is interested in constructing another naval base in South America.

One senior United States defense source said, “In the 20 years since [9/11], China has a blue-water navy and an offensive missile capability, they have man-made islands in the East and South China Seas for military purposes, and they have a base overseas [Djibouti] and, we believe, plans for one in Pakistan.”

All through the coronavirus pandemic, China has been stepping up efforts to tighten its grip in the Pacific and secure its dominance in the South China Sea over competing Asian powers. This Djibouti base on the other side of the world is a similar statement of intent, not only to dominate Asia but the world.

China’s total takeover of Djibouti directly jeopardizes the U.S.’s Camp Lemonnier base and its 4,000 troops. U.S. Gen. Thomas Waldhauser expressed concern at the potentiality of China controlling Djibouti. The Port of Doraleh, directly adjacent to China’s newly completed base, provides the U.S. with services for most of its military operations in Africa.

“If the Chinese took over that port, the consequences could be significant,” General Waldhauser said. “Moreover, our U.S. Navy ships come in and out of there to refuel and whatnot. There could be some consequences, that is why it is important to watch this.”

The recently completed expansions effectively give China control over a port where American ships refuel, restock and resupply the base, and China is still expanding the port. And America has done nothing to stop it. Beyond jeopardizing America’s base in Djibouti, it is pushing the U.S. out of world trade, as prophesied in the Bible.

Jesus Christ Himself prophesied of a period of war and conflict called “the times of the Gentiles” (Luke 21:24). In The United States and Britain in Prophecy, Herbert W. Armstrong proved that Bible prophecy regarding Israel refers mainly to the nations of Great Britain and the United States of America.

Trumpet editor in chief Gerald Flurry explained in his article “The Climax of Man’s Rule Over Man” that the term Gentiles refers to non-Israelite nations. “Once you understand who Israel is,” he wrote, “then you can see how the Gentiles—the non-Israelite peoples—have started to take charge of the world already.”

Indeed, we do see China, one of these Gentile nations, starting to take charge today—not only of Asia-Pacific but of the whole world.

In Russia and China in Prophecy (request your free copy), we write, “Critics groused about China’s poor human rights, its authoritarianism, its support for corrupt regimes, its pollution. Correct as they are, their criticisms simply aren’t going to stop this bullet train. This country is barreling into the future—and, in the process, changing the world.”

Even today, China has lied about coronavirus, hoarded medical supplies, and subsequently used “mask diplomacy.” And yet even with that, it continues barreling into the future, increasing its naval power around the world, as the U.S. and other countries simply watch.

As we write in Russia and China in Prophecy, “Keep your eye on China. Within a few short years, this nation—the ascendant, proud China that has emerged today—will dazzle the world. Watching its vault into great-power status truly is a look at the future.”

To fully understand the role China will play in world events once the times of the Gentiles are fulfilled, read “The Climax of Man’s Rule Over Man,” by Mr. Flurry.