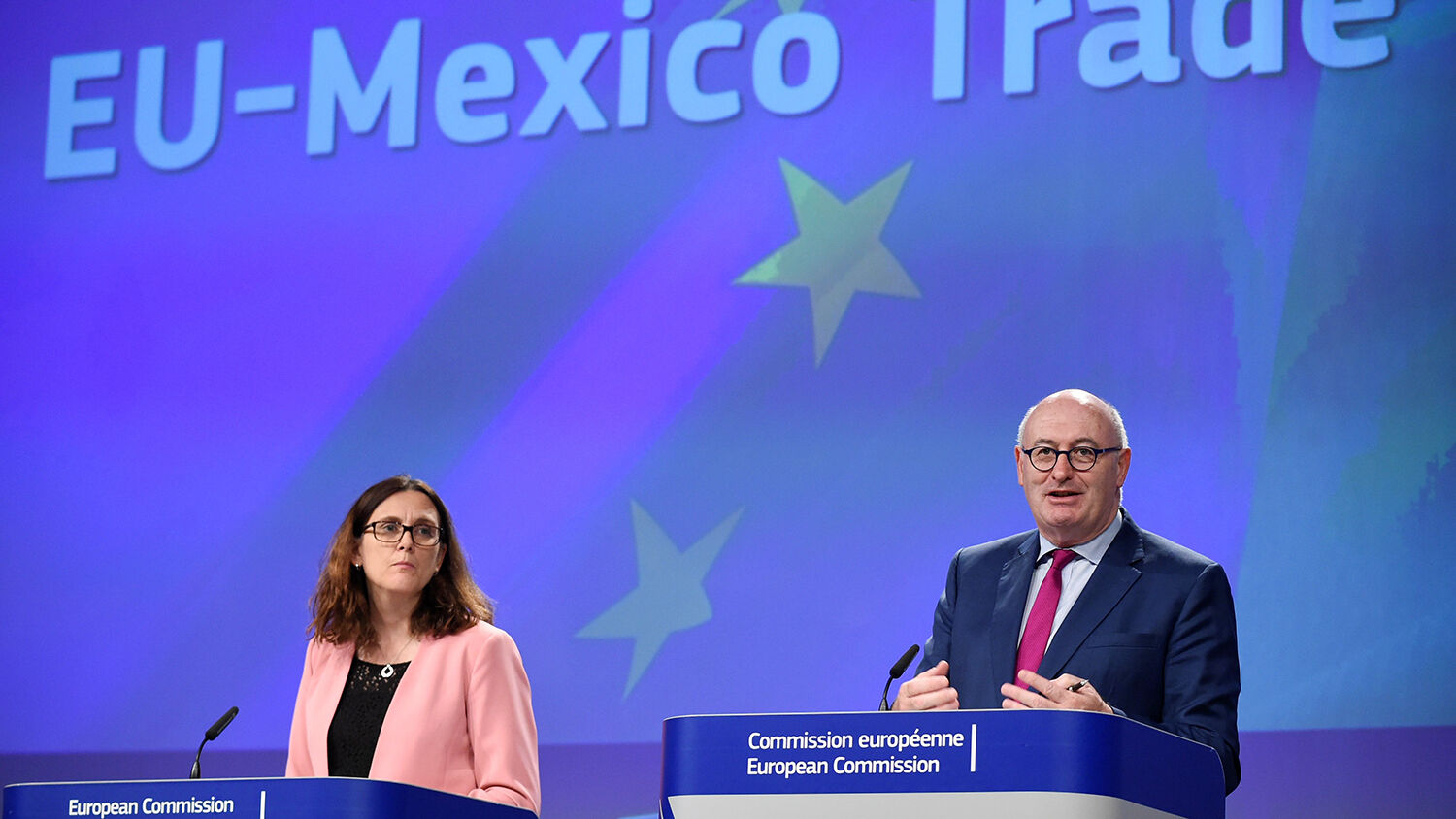 Former European Commissioner for Trade Cecilia Malmstrom (left) and Former EU Commissioner of Agriculture Rural Development Phil Hogan give a joint press on the EU-Mexico trade agreement at the EU headquarters in Brussels on April 23, 2018.
JOHN THYS/AFP via Getty Images

Another step toward closer union with Europe’s old colonies

The European Union and Mexico struck a free-trade agreement on April 28, updating the previous 2000 accord. It promises to boost Mexico’s struggling economy with new employment and production activities, and allow for greater cooperation with the EU. Most of all, it shifts Mexico’s economic outlook further from America and closer to Europe.

Almost all trade in goods between the EU and Mexico will become duty free. Customs procedures will become simpler, and fees will be removed. EU Trade Commissioner Phil Hogan and Mexican Minister of Economy Graciela Marquez Colin were the main negotiators. Hogan stated, “While most of our efforts have been focused lately on tackling the coronavirus crisis, we have also been working to advance our open and fair-trade agenda. … I am very pleased, therefore, that together with our Mexican partners, we share similar views and that our continued work could now come to fruition.”

The EU and Mexico concluded today the negotiations of their new trade agreement.
Openness and partnerships will be even more essential as we rebuild our economies after the #coronavirus pandemic. #EUtrade https://t.co/sQZJc6rLn6

This has been in progress for two years. Mexico and the EU agreed on April 21, 2018, to update their 2001 deal after a visit by then Trade Commissioner Cecelia Malmstrom.

The new deal will now advance to the next stage, where EU and Mexican officials will sign it into law.

Mexico is the EU’s number one trading partner in Latin America. In 2018 and 2019, $72.4 billion in goods and $20.8 billion in services flowed between the two. Although Mexico still trades more with the United States by far, its move toward greater trade and cooperation with Europe is worth noting.

“Few Americans are paying attention to the situation that is developing to our south. But I guarantee they won’t be able to ignore it indefinitely,” wrote Trumpet editor in chief Gerald Flurry in a March 2019 article on the EU-mercosur deal. The mercosur bloc involves Argentina, Brazil, Paraguay and Uruguay. “This trade agreement will impact the whole world! It is going to affect your life dramatically. The seeds are being sown for a trade war and an economic besiegement that will help destroy America. This trade deal is that important!”

In the end, this will lead to a trade war, which America won’t be able to win.

In 1962, the Plain Truth, our predecessor magazine, warned what is beginning to happen today: “[T]he United States is going to be left out in the cold as two gigantic trade blocs, Europe and Latin America, mesh together and begin calling the shots in world commerce.” How could it have foreseen this with such accuracy?

Bible prophecy gives the answer. Ultimately, South America will draw nearer to Europe. Isaiah 23:3 describes a “mart of nations,” or trading bloc, that will soon shut America out of world trade (read our article “The Great ‘Mart of Nations’” for more information). America will be economically besieged by two giant trading powers.

Mercosur has a combined gross domestic product of $2.4 trillion. The combined EU gdp is almost $18.8 trillion, according to the World Bank. Together, they would equal or surpass the U.S. as the world’s largest economy.

Why will this happen? Mr. Flurry wrote:

To understand what Bible prophecy says about this Europe-Latin America deal, you need to know some crucial ancient history.

The story of America’s exalted position in the world today traces all the way back to the biblical patriarch Abraham. God called Abraham and put him through a severe test of his faith. When Abraham passed it, God made an extraordinary promise to him: “By myself have I sworn, saith the Lord, for because thou has done this thing, and hast not withheld thy son, thine only son: That in blessing I will bless thee, and in multiplying I will multiply thy seed as the stars of the heaven, and as the sand which is upon the sea shore; and thy seed shall possess the gate of his enemies” (Genesis 22:16-17).

God promised to bestow real power on nations that would descend from Abraham—nations that are still on the scene in modern times! You can read the full story of how God kept this promise in Herbert W. Armstrong’s book The United States and Britain in Prophecy, which we will be glad to send you at no cost.

What does it mean to possess the “gates” of your enemies? In practical terms, it means controlling worldwide trade.

America and Britain have already given up most of these “gates” today. One of the last major sea routes where the U.S. has remained unchallenged by strong foreign competition is the gulf of Mexico. Now, Latin and South American countries are becoming the front line of a trade war. This war has been waged by Russia and China. However, an often overlooked competitor is Europe.

Though Mexico’s economy is not as large as the combined might of mercosur, its trade agreement with the EU is another important step in turning Latin America toward Europe and shutting out America, just as the Bible prophesies.

Read Mr. Flurry’s article “America Is Being Besieged Economically” to understand what this developing trade war means for you.