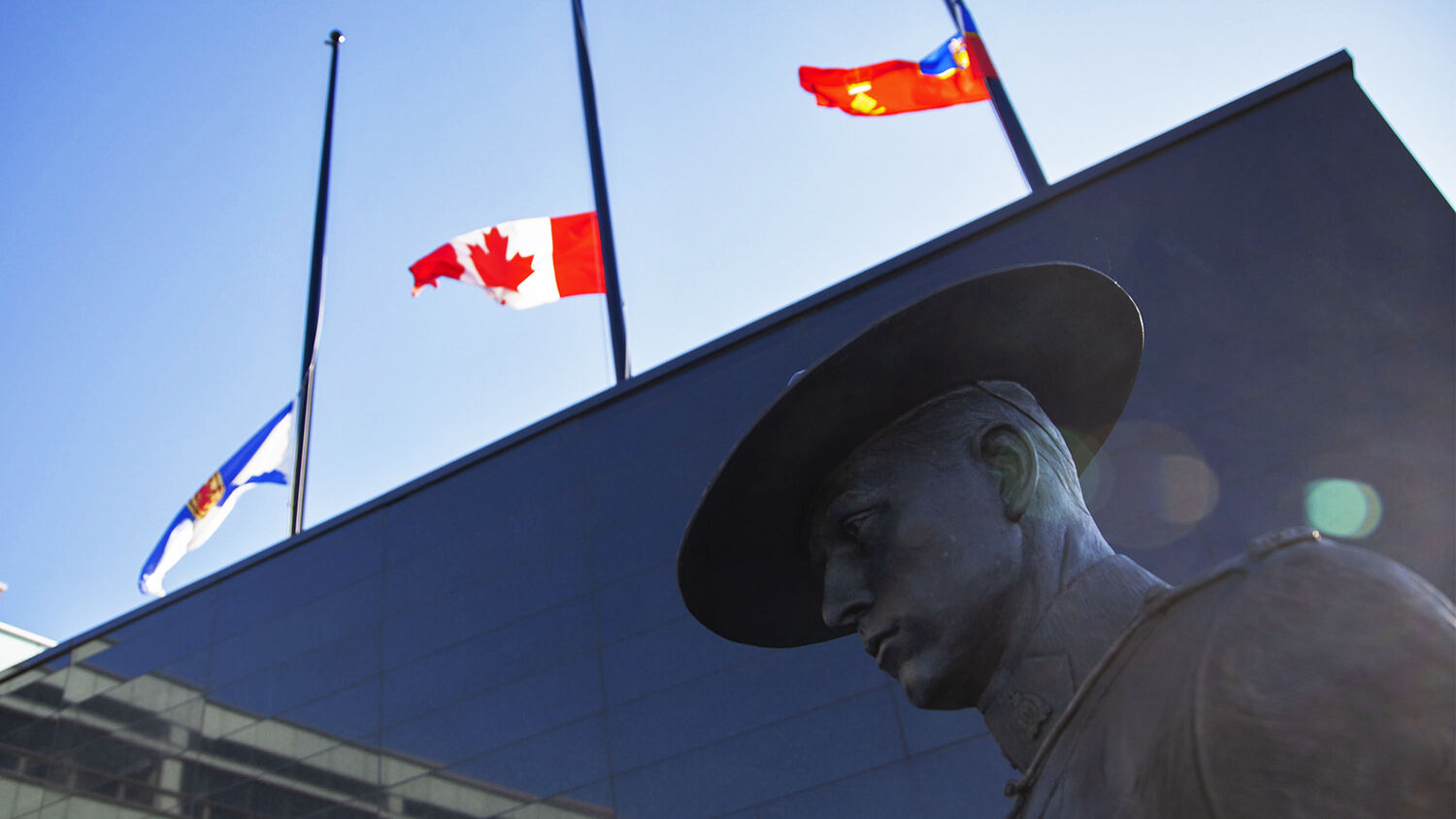 Flags of Nova Scotia and Canada fly at half-mast outside the Nova Scotia Royal Canadian Mounted Police headquarters in Dartmouth, Nova Scotia, on April 19 after a shooting rampage.
TIM KROCHAK/AFP via Getty Images

An armed man driving a decommissioned police cruiser and wearing a police uniform killed 18 people before police shot him and ended Canada’s deadliest mass shooting. The violence unfolded over the course of 12 hours between Saturday and Sunday, April 18 and 19, in the eastern province of Nova Scotia.

The attacker, Gabriel Wortman, began his killing spree on Saturday night by murdering several people and setting fire to three houses in the small town of Portapique. The next day near 9 a.m., Royal Canadian Mounted Police (rcmp) responded to reports of an active shooter. Wortman had prepared for the attack and was able to evade police before being killed at a gas station in the town of Enfield around noon.

Wortman’s disguise enabled him to trap his victims because “they would have trusted him,” a police source told the Toronto Sun. When people answered his knock at their door or were pulled over by him, Wortman shot them, and then left to find another victim.

“The fact that this individual had a uniform and a police car at his disposal certainly speaks to it not being a random act,” said rcmp Chief Superintendent Chris Leather.

So far, the death toll stands at 19, including Wortman. It surpasses what had been Canada’s deadliest mass shooting at Montreal’s École Polytechnique College, where a gunman killed 14 women in 1989.

“There could be more [deaths],” another police source told the Sun. “There were burned homes that have not been searched. Officers have been going into homes and finding bodies.”

One of the officially identified victims was rcmp officer Heidi Stevenson, killed in an exchange of gunfire after attempting to stop Wortman on the highway.

All the victims are believed to be from the small town of Portapique, which has a population of only 100 to 250 people depending on the time of year. “This is one of the most senseless acts of violence in our province’s history,” stated Nova Scotia Premier Stephen McNeil. He called it a “heavy burden” at a time when the country is already beset by the effects of the coronavirus lockdown.

Those who knew Wortman, who was a denturist from a quiet town in Nova Scotia, were stunned to learn what he had done. Compared to the United States, where mass shootings have been more common, Canada’s gun control laws are incredibly strict. Those looking to buy a gun first need official training, a personal risk assessment, two references and a criminal record check, in addition to notifying their spouse.

Yet all this failed to stop the country’s worst act of violence in recent memory. Why?

The investigation has only begun, and it remains to be seen what will be uncovered about Wortman’s background. It may reveal his motivation. It may show that he was troubled mentally. Whatever is discovered, it will not reveal the underlying cause. To truly understand the source of such atrocious deeds, we must look to the Bible.

“People keep asking for solutions, but nobody seems to have one,” wrote Trumpet editor in chief Gerald Flurry in “The Real Solution to Mass Shootings and Violence.” “This gigantic problem threatens to tear our society apart!” Mr. Flurry showed that the solution to these tragedies is rooted in law—not human law, but God’s law.

This is why even the strictest gun control measures cannot solve society’s violence epidemic. The Bible says that violence will get worse. “Make a chain: for the land is full of bloody crimes, and the city is full of violence” (Ezekiel 7:23). “Think about what this is saying, then look at the headlines,” Mr. Flurry wrote. “Our land is so saturated with bloody crimes that one crime follows another like links in a chain—just the way God prophesied it would be!”

Canada has not experienced the same frequency of mass shootings as the U.S. Yet despite many years of comparative peace, Canada is not immune to these tragedies. This weekend’s events were a wake-up call for the country, but such events will happen more often unless the root of the problem is dealt with.

The only way to understand what truly motivates people to commit mass shootings is to look at what the Bible reveals about a powerful spirit being that influences the minds of humanity.

The Bible explains that this is not God’s world. 1 Corinthians 4:4 and Ephesians 2:2 show that Satan is the “god of this world” and the “prince of the power of the air.” He broadcasts hatred, anger, selfishness, violence and other evil attitudes to human minds (read Chapter 2 of Mystery of the Ages, by Herbert W. Armstrong, for a detailed explanation).

But there is a solution.

“Within our present governmental system we cannot solve the terrifying problem of violence! We are having trouble even deterring it!” wrote Mr. Flurry. “Only God can solve these problems of violence and crime. And we must start with His law.”

The solution is to individually turn to God’s law and live by it. God plans to restore His law to the whole world very soon. Until then, you can choose to learn and live by God’s law today. Doing so will bring you peace of mind and even physical protection amidst an increasingly dangerous and uncertain world.

To understand in depth the real cause of today’s increasing violence, order your free copy of Mystery of the Ages. It offers a clear, biblical explanation of why today’s world is plagued by violence, as well how God will soon establish His law, ending those problems permanently.