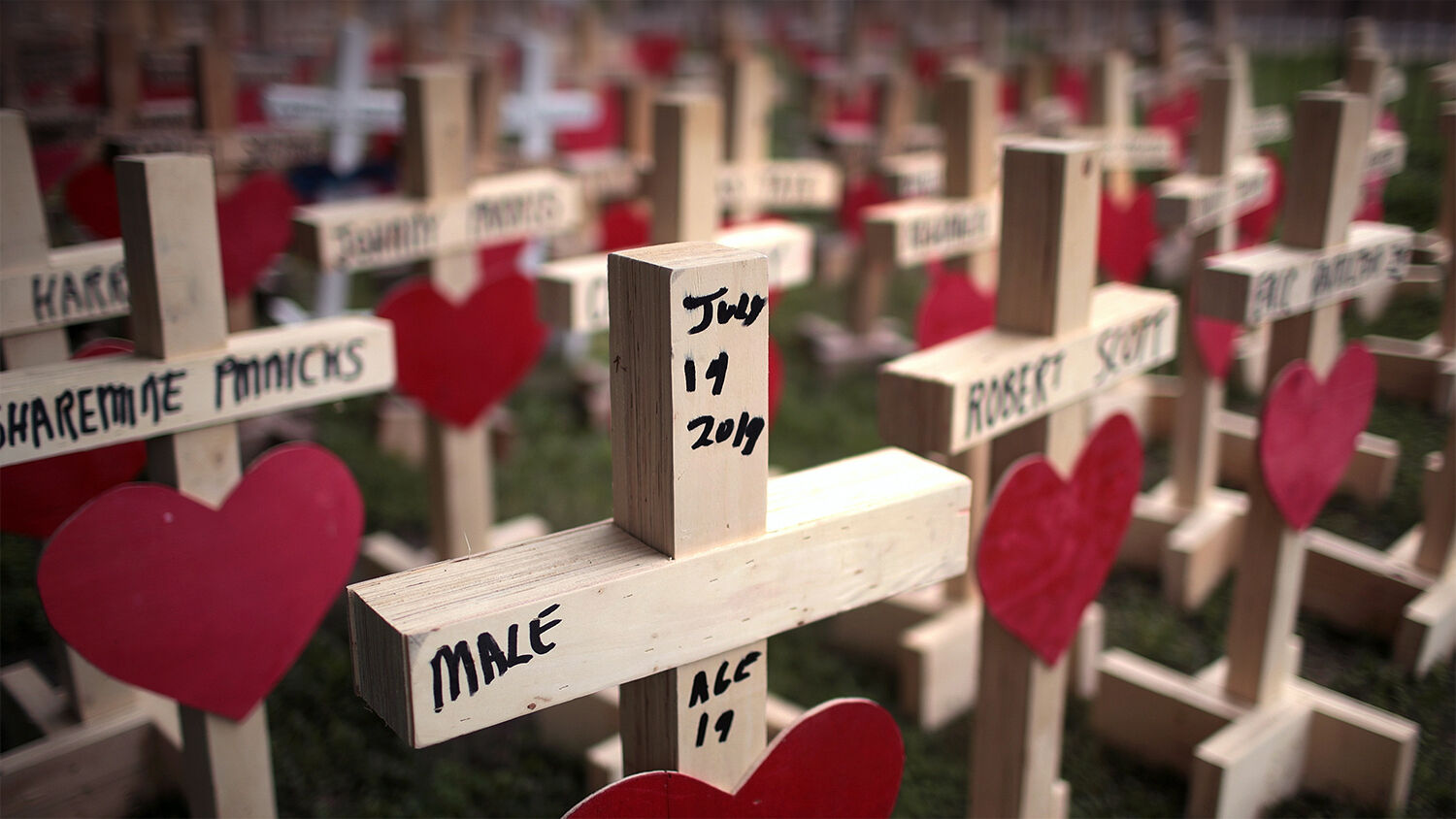 The Real Solution to Mass Shootings and Violence

Crosses cover a vacant lot in Chicago, Illinois, set up by Crosses for Losses, as a memorial for the 314 people murdered in that city as of August 16.
Scott Olsen/Getty Images

The Real Solution to Mass Shootings and Violence

You aren’t hearing about it—and that is at the root of the problem.

From the October 2019 Trumpet Print Edition

Mass shootings never seem far from our headlines. Recent shootings in El Paso, Texas, and Dayton, Ohio, that killed over 30 people caused great concern among the American people. But these were only the most recent, and most prominent, in a continual dirge of brutality. America is continually plagued by bloody, violent crimes.

People keep asking for solutions, but nobody seems to have one. This gigantic problem threatens to tear our society apart!

This article discusses the only real solution to the epidemic of violence.

When our government fails to provide a solution, people begin to take matters into their own hands. More and more people are buying guns. Many people feel a personal gun is their only real defense.

After a mass shooting there is renewed calls for stricter gun control. More gun-control laws might make it more difficult to obtain a gun, but the laws don’t affect the hundreds of million of guns that Americans already own.

America has lost the war on crime! And the consequences are going to be staggering. You can’t lose a war without devastating results!

In many places in America, our law enforcement is simply too overtaxed to adequately address crimes that occur. In some cities, the majority of murders are going unpunished! That means the killers are winning!

Within our present governmental system we cannot solve the terrifying problem of violence! We are having trouble even deterring it!

There is good news though. God is about to implement a new system of government.

Many people don’t know it, but America’s problem with gun violence and crime was prophesied to occur in our day.

The book of Ezekiel contains many prophecies that are addressed specifically at America and Britain in the end time. Anciently, the kingdom of Israel had been in captivity more than 100 years when Ezekiel was delivering his warning message. This shows that Ezekiel’s message is primarily for the end-time descendants of Israel; America is the most prominent of these descendants. (Request our book Ezekiel: The End-Time Prophet for more explanation on this crucial point. All of our literature is free.) This means that Ezekiel’s message will have mostly been in vain unless we proclaim it today!

The subject is the end time (Ezekiel 7:1-2)—the end of the age of man, the time right before the return of Jesus Christ. This is a message for today! Several other indications in Ezekiel’s prophecy show this to be true.

“Make a chain: for the land is full of bloody crimes, and the city is full of violence” (verse 23). Think about what this is saying, then look at the headlines. Our land is so saturated with bloody crimes that one crime follows another like links in a chain—just the way God prophesied it would be!

God is very wrathful about this serious problem. Many prophecies explain what He will do to address it. Here it is in summary: “Wherefore I will bring the worst of the heathen, and they shall possess their houses: I will also make the pomp of the strong to cease; and their holy places shall be defiled” (verse 24). You can put this together with many other prophecies to see that God, in order to correct us, is going to send Germany. Many people scoff at such a warning. But soon they will not be scoffing. Just look at the history of World War ii, and you will gain insight into how dangerous Germany can be. Biblical prophecy says what they do in World War iii will be even worse. (Request our booklet Germany and the Holy Roman Empire, and read Chapter 5, “Germany in Prophecy.”)

Why would God correct us so harshly? If you know God, you know that He would not punish so severely unless the magnitude of our sin demanded it! What is our great sin?

Ezekiel’s prophecy continues: “Mischief shall come upon mischief, and rumour shall be upon rumour; then shall they seek a vision of the prophet; but the law shall perish from the priest, and counsel from the ancients” (Ezekiel 7:26). The law, or the Ten Commandments, was prophesied to “perish” from the priests, or ministers. The word perish can also mean to loosen the reins.

How many religions teach that God’s law was done away with today? Almost all of them! Worldly religions are transgressing God’s law more brazenly than they ever have before, though they have never really kept it in this end time.

At the same time, even God’s own Church, to whom He gave His law in this end time, has become spiritually lukewarm and has cast away the law (Revelation 3:14-19). This is why God said “the law shall perish from the priest.” God’s own people are rejecting the very law that would eliminate these violent and bloody crimes in our society!

There is cause and effect. There is a cause for every problem. The cause of our violent and bloody crimes is that as a society we have rejected God’s law!

The cause of our violent and bloody crimes is that as a society we have rejected God’s law!

That law is a law of love. It teaches you how to love God and love your fellow man (Matthew 22:36-40). It forbids hatred and murder. It prohibits lust and coveting, which lead to violence (James 4:1-3). That law would bring peace and abundance to our society in every way. The more we transgress it, the worse our bloody crimes become.

God is revealing that even His own people are involved in rebellion. “My face will I turn also from them, and they shall pollute my secret place: for the robbers shall enter into it, and defile it” (Ezekiel 7:22). Where is the place in the temple anciently that God called His secret place? It was the holy of holies, where God dwelled and only the high priest entered once a year on the Day of Atonement (Leviticus 16). Today, God is referring to the holiest place on Earth—His own Church. Tragically, this holy of holies has been polluted!

Then God discusses our bloody crimes in the next verse (Ezekiel 7:23). Is there a connection? Indeed there is! The only solution to America’s crime problem is God’s truth. And that truth is in only one Church today—God’s Church. However, most of God’s people have become lukewarm. Only God’s Philadelphia Church has retained God’s law in this end time, and the government that is based on that law.

What a disaster when people reject the very law that would solve our colossal crime problems!

What a disaster when people reject the very law that would solve our colossal crime problems! Only God can solve these problems of violence and crime. And we must start with His law.

In Ezekiel 9:2, God addresses the “brasen altar.” This was inside God’s temple anciently, which is a symbol of God’s Church today. “And the Lord said unto him, Go through the midst of the city, through the midst of Jerusalem, and set a mark upon the foreheads of the men that sigh and that cry for all the abominations that be done in the midst thereof” (Ezekiel 9:4). Jerusalem is a type of all the modern nations that descended from ancient Israel, most prominently America and Britain (read The United States and Britain in Prophecy). God puts a mark on His people who sigh and cry about these abominations—like mass shootings and crime. God’s true Church expresses that “sigh” and “cry” by warning the modern nations of Israel about their problems and then showing God’s solution. The mark is on them to demonstrate that God is going to save them from Israel’s destruction. They will be taken to a place of safety (Revelation 12:14).

But when the nations of modern Israel collapse and go into captivity, God’s lukewarm people will be left unprotected! “Slay utterly old and young, both maids, and little children, and women: but come not near any man upon whom is the mark; and begin at my sanctuary …” (Ezekiel 9:6). The punishing will begin at God’s “sanctuary.” God starts the punishment with His own Laodicean people who have not repented!

But that isn’t where the punishment ends. It will also swallow the whole nation, in large part because modern-day Israel does not look to God for a solution to the violence problem. “Then said he unto me, The iniquity of the house of Israel and Judah is exceeding great, and the land is full of blood, and the city full of perverseness: for they say, The Lord hath forsaken the earth, and the Lord seeth not” (verse 9). The “land is full of blood”—because we reject God’s law. The city is “full of perverseness”—or, the Hebrew could read, “a wresting of judgment.” The judgments our leaders make concerning these bloody crimes are based on human reasoning, not God’s law!

What a terrible penalty we are receiving for this error in judgment. “And as for me also, mine eye shall not spare, neither will I have pity, but I will recompense their way upon their head” (verse 10). God is going to punish without pity because Israel has rebelled against His law. He will “recompense their way upon their head.” That means the fruits of their own wrong judgments will come crashing down on their heads. Our society is unraveling because of our evil way of life!

“Woe to the rebellious children, saith the Lord, that take counsel, but not of me; and that cover with a covering, but not of my spirit, that they may add sin to sin” (Isaiah 30:1). Woe of the worst kind is coming upon the rebellious children of Israel. Why? Because they “take counsel, but not of me [God].” Do we really seek God’s counsel about our problems? Not even close! Just listen to the national discussion after these most recent mass shootings. The “solutions” being proposed are mostly actions meant to score political points—it seems the greatest preoccupation is not to solve problems at all, but to use those tragedies to smear political opponents!

And sadly, God’s lukewarm saints are so blind that they don’t even proclaim the solution to Israel!

“Now go, write it before them in a table, and note it in a book, that it may be for the time to come for ever and ever” (verse 8). The expression “time to come” in the Hebrew means “the latter day.” God wrote these prophecies in a book for the latter day—or the end time. The only reason these prophecies are in a book is for our time now! “That this is a rebellious people, lying children, children that will not hear the law of the Lord” (verse 9). God says Israel and the Laodiceans are “lying children” who “will not hear the law of God.”

“Which say to the seers, See not; and to the prophets, Prophesy not unto us right things, speak unto us smooth things, prophesy deceits” (verse 10). Because God’s lukewarm saints are rebelling against God’s law, they say “prophesy not.” They used to prophesy, when they had strong leadership under Herbert W. Armstrong, but after he died, they stopped. They refuse to prophesy the mind-numbing prophecies, such as our problems of violence and crime. Instead they say, “Get you out of the way, turn aside out of the path, cause the Holy One of Israel to cease from before us” (verse 11). God was with them, but they caused Him to cease from among them! This is the greatest crime of all. That leaves only the Philadelphia Church to proclaim the truth of God! We must not fail God.