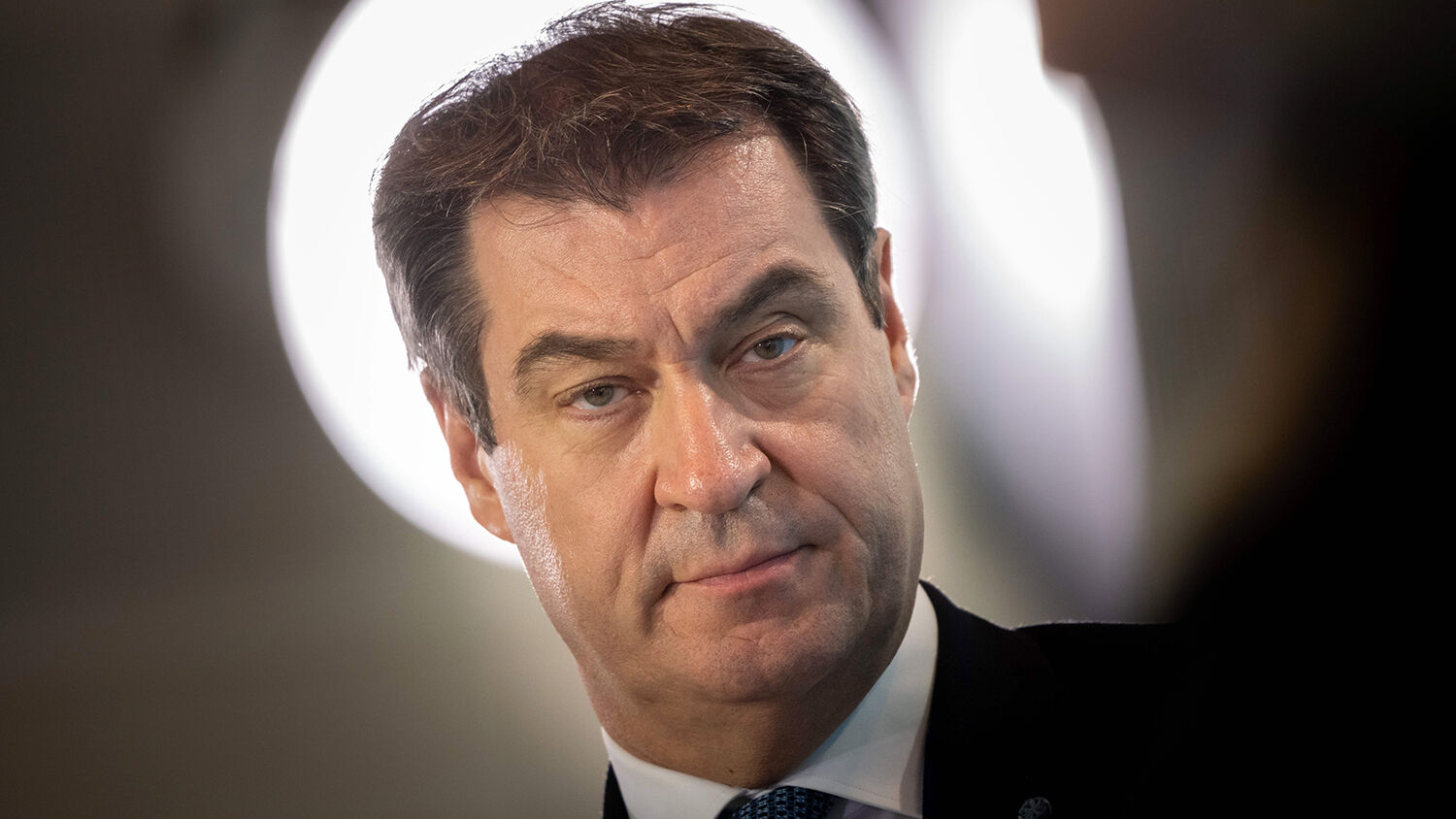 Markus Söder, state premier of Bavaria, gives a press conference on March 30 in Munich, Germany, to announce that Bavaria will prolong its measures to limit the spread of coronavirus.
PETER KNEFFEL/POOL/AFP via Getty Images

The combination of religion, heritage and strong government is a recipe for success in Germany.

“Stay healthy! And for everyone who prays and believes, like me, God protect our homeland!” (Trumpet translation throughout). That’s how Bavarian State Premier Markus Söder ended his address to the government in the State Parliament on March 19. Beyond praying for protection, Söder also ordered the most restrictive measures in Germany to combat the coronavirus outbreak. His tough actions caused his popularity to soar. His method for success is worth taking note of.

In response to Söder’s appeal to pray together, a broad ecumenical network of Catholic, Protestant, Orthodox and Free Church Christians joined together on April 8 for “Germany Unites in Prayer.” Oftentimes, religious leaders of varying Christian sects will lay aside differences in the face of crisis. Söder himself took over the event’s patronage that united around 200 Christian churches with members of all different denominations; some politicians and celebrities even joined.

Prof. Thomas Schirrmacher, chairman of the Theological Commission, joined as the theological adviser. Schirrmacher is the associate secretary general of the World Evangelical Alliance, which represents more than 600 million evangelicals.

Söder is only Bavaria’s second Protestant state premier since 1945; most others have been Catholic. This means Söder has a unique opportunity to lead the ecumenical work of the churches. Instead of attempting to lure Protestant churches back to the mother church, Söder is leading by example, showing that Protestants and Catholics can work together.

Söder has been working to revive Christianity in Bavaria. In June 2018, he requested that a cross be hung in the entrances to all state buildings in Bavaria. Following the refugee crisis and the increase in Germany’s Muslim population, this display was especially controversial. According to Söder, however, the cross is not a symbol of exclusion or “the pin of a religious association” but rather a symbol of charity and respect for the individual.

In other words, even though church and state are officially separated, a Christian symbol in a state building can’t be prohibited.

In the Tradition of Bavaria’s Legends

In addition to reviving Christianity, Söder can also attribute his success to walking in the footsteps of Bavaria’s legends. “Mr. Söder hopes to maintain the [Christian Social Union (csu)] as a broad church, emulating the party’s other great leaders, Edmund Stoiber and Franz Josef Strauss,” the Economist wrote on April 4.

Ever since he was a teenager, Söder has admired Franz Josef Strauss: “I even had a huge Strauss poster, almost larger than life,” he said. “I lived at our house under a sloping roof, and there was this poster. When I woke up, I looked directly at Strauss on the ceiling.”

Strauss played a crucial role in postwar Germany. He was Germany’s second defense minister; he later led the csu and was Bavaria’s state premier until his death in 1988. Strauss was also the first leader of the csu to be a candidate for the chancellery. Edmund Stoiber was Strauss’s general secretary, and to date, the only other csu leader to become a chancellor-candidate.

Stoiber is still seen as a puppet master in the csu today. He works within the EU, visits leaders abroad, and criticizes the leadership in Berlin as he pleases. When Söder ran to become Bavaria’s state premier, Stoiber was at his side campaigning for him.

“Bavaria, a big, rich, swaggering state, has more covid-19 cases than any other,” the Economist noted. “But Mr. Söder is having a good crisis. He closed schools early; when other states followed, it seemed as if Munich rather than Berlin was driving policy.” His crisis management has caused many to ask: “Might he bid to be Germany’s chancellor?”

Rather than coordinating joint actions with other states, Söder enforced the first lockdown in Germany independently. He restricted people’s freedoms, but grew in popularity—not only in Bavaria, but in the whole country.

In the October 2018 state elections, the csu, under Markus Söder, received 37.2 percent of the vote. Following the coronavirus crisis, a representative survey by the opinion research institute Civey shows that 44 percent would now vote for the csu.

Nationwide, Söder has reached unprecedented favor in the polls. According to the Insa Institute, in one week, his approval rating increased 28 points to 156 out of 300 possible points. “It is the highest increase that has ever been measured since the start of the January 2019 survey,” Focus magazine wrote. German Chancellor Angela Merkel came second in the rating with 138 points, adding 12 points to her previous rating.

“When he finally became state premier,” Die Welt wrote, “the versatile Markus Söder started a breathtaking chase. … He has long since become a kind of secondary vice-chancellor.”

Die Welt further explained, “In the coronavirus crisis, he embodies, like no other, the strong state that leads the citizens with determination and, at the same time, relies on their understanding.” The recent crisis truly has bolstered Söder’s popularity. While he has been considered a potential chancellor-candidate before, it now appears that the people may nearly beg for him to run for the Christian Democrats in the next election.

The Yearning for Strongmen

Europe’s history is marked by the rise of kings and emperors who united the Continent through religion. History refers to this church-state union as the Holy Roman Empire.

Few realize, however, that this recurring union of church and state was foretold thousands of years ago.

In Revelation 17, the Apostle John describes a woman riding a beast. Daniel 7 tells us that the Bible uses the symbol of beasts to describe empires; a woman often refers to a church (Isaiah 47; Ephesians 5). Revelation 17:2, then, refers to a church with “whom the kings of the earth have committed fornication.” The headquarters of this church is between “seven mountains” and has influence over “peoples, and multitudes, and nations, and tongues” (verses 9, 15).

As explained in The Holy Roman Empire in Prophecy, this passage is referring to the Roman Catholic Church.

Trumpet editor in chief Gerald Flurry explained in “A Monumental Moment in European History”: “The church leading the Holy Roman Empire is not God’s true Church. But God does allow this church to gain control of this German-led European beast power. Expect the Catholic Church to become more vocal and for this church-state axis to become more evident.” We are now seeing the stage being set for this church-state union to dramatically come on the scene.

People are increasingly willing to accept strong government and are no longer repelled by their leaders delivering religious messages. The fact that Söder was able to enforce mandatory crosses in public buildings and take over the patronage for a religious event is a strong sign that we are about to see the fulfillment of these dramatic prophecies—and the rise of the Holy Roman Empire.

The Roman Catholic Church is the biggest driving force behind ecumenical events. Most Christian churches today have broken away from the Catholic Church, but Isaiah 47 prophesies that the Catholic Church will not “know the loss of children” (verse 8). That means the church’s Protestant daughters will return to the fold.

Söder has defended the church’s claim for a church tax and state government services for church decisions.

If he now also furthers the unity between the Catholic Church and its various daughter churches in Germany, his government could play a significant role prophetically.

However, this unity will not be achieved in the name of peace. Mr. Flurry wrote in May 2007, “Indeed, biblical prophecy indicates that full unity will not be achieved purely voluntarily. At a certain point, the mother church will abandon its efforts to woo her daughters back by flatteries and instead revert to the age-old method of preserving ‘Christian’ unity by exerting physical force.”

For this prophecy to be fulfilled, the Roman Catholic Church needs to be allied with European leaders who are willing to execute the church’s will over the people. Revelation 13 shows that most people will comply willingly, while some will be punished severely for their disobedience.

In Revelation 17, the Bible describes 10 kings, or European leaders, who will join forces with the Catholic Church in the end time. While it remains to be seen who will specifically fill these roles, the stage is now being set for this prophecy to be fulfilled.

The Holy Roman Empire is rising again, and you need to understand what this is about. The Bible says this empire will be mankind’s last attempt to rule itself before Jesus Christ intervenes and brings peace and prosperity to the world. Request your free copy of The Holy Roman Empire in Prophecy, by theTrumpet.com managing editor Brad Macdonald, for a detailed study of this empire’s history and future in light of Bible prophecy.