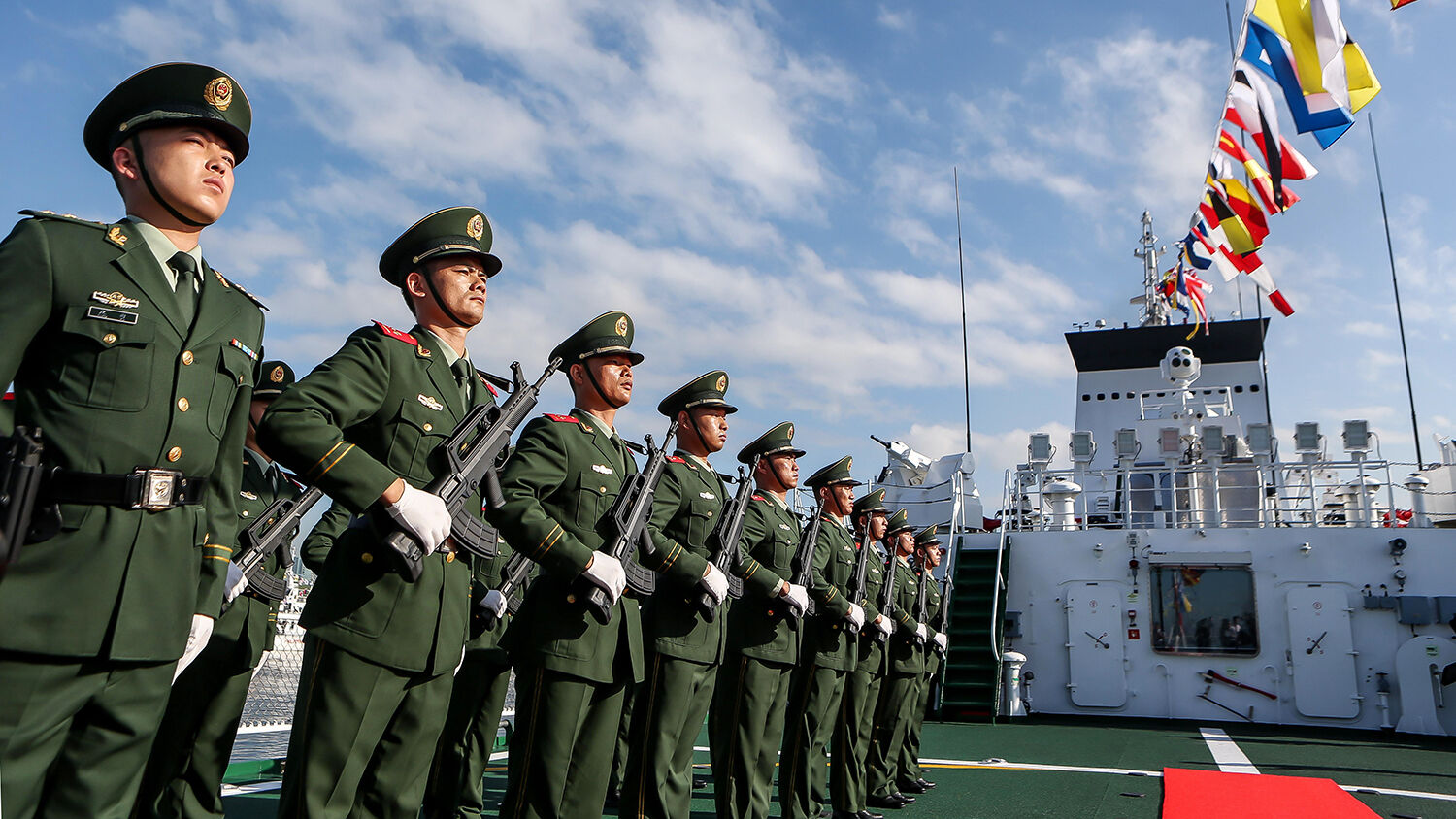 Members of the Chinese Coast Guard stand at attention on the vessel ccg-5204 at Pier 15 in Manila, Philippines, on January 14.
Xinhua/Wu Mali via Getty Images

China continues strategic maritime incursions under cover of the disease.

A Chinese ship rammed and sunk a Vietnamese fishing boat in the disputed South China Sea on April 2. The Chinese Coast Guard detained the eight fishermen on board. Two Vietnamese rescue boats deployed to rescue the fishermen were also detained. All were released later that evening.

According to Chinese Foreign Ministry spokeswoman Hua Chunying, Vietnam was the aggressive party, not China. After the fishing boat refused to leave the area when ordered to by the Coast Guard, she said, the fishing boat “suddenly turned sharply” and hit the Chinese ship, which had tried to avoid it.

The incident happened off the coast of the disputed Paracel Islands. The island chain is claimed by Vietnam, but since the bloody 1974 invasion that killed several Vietnamese, China has claimed sovereignty over it.

This is the second time a Vietnamese fishing vessel has been involved in an altercation with a Chinese ship near the Paracels. The Vietnamese Foreign Ministry released a statement, saying, “The Chinese vessel committed an act that violated Vietnam’s sovereignty over the [Paracel Islands] and threatened the lives and damaged the property and legitimate interests of Vietnamese fishermen.”

The United States State Department said it was “seriously concerned” by the reports of China’s aggressive actions. Spokesperson Morgan Ortagus called it “the latest in a long string of [Chinese] actions to assert unlawful maritime claims and disadvantage its Southeast Asian neighbors in the South China Sea.”

While China has been fostering goodwill overseas amidst the coronavirus, it has been reshaping the Asia-Pacific through a methodical series of strategic and military incursions.

For years, China has been consolidating the South China Sea. Global crises usually tend to bring at least the hope of a suspension of geopolitical advances for the sake of international cooperation. China, however, has seen fit to do both: While providing aid to ailing European nations, such as Italy, it is also ensuring that its authority and claims in the highly valuable trade route remain assured.

Whether China or Vietnam was the aggressor in the April 4 conflict, China’s assured and resolute response shows that it has both the means and the will to ensure that it has no challengers in the area it claims as its own. In fact, since the coronavirus outbreak, China has made other moves to strengthen its stranglehold over the South China Sea.

Since the pandemic began, it has constructed new research stations at its military bases on the artificial islands. It has landed aircraft on its Fiery Cross Reef military base, while also continuing the deployment of naval militia. China has used the cover of coronavirus to reinforce, rather than pause, its maritime incursions.

China claims nearly 90 percent of the South China Sea, despite rival claimants Vietnam, Malaysia, Taiwan, Brunei and the Philippines also claiming the waters as their own. It has built seven artificial islands in the Spratly and Paracel archipelagos. And in recent years, it has become more aggressive in its claims.

While the U.S. has condemned China’s actions, it is actually America’s weakness in the wake of Chinese aggression that has allowed such maritime inroads.

In “China Is Steering the World Toward War,” Trumpet editor in chief Gerald Flurry wrote: “Each year, $5.3 trillion of trade passes through the South China Sea. That is roughly one third of the world’s maritime commerce! Since Japan’s defeat in World War ii, America has protected this vital trade route and brought peace to this part of the world. Now the American military is retreating, and other great powers are coming in to fill the vacuum. This is going to dramatically affect trade around the world, and U.S. trade especially.”

America had a military presence in the South China Sea, but it retreated. Although it condemns China’s aggressive behavior, it lacks the will to use its strength to make a difference. China, on the other hand, has used its will to make inroads in the Asia-Pacific and is indeed leading the world toward war!

A prophesied trade war will precede this coming conflict. God warned the nations of Israel—primarily the U.S. and Britain, today (for proof, read The United States and Britain in Prophecy)—that if they disobeyed His commandments, He would break the pride of their power (Leviticus 26:19). He also said that He would give their sea gates, vital trade routes, over to their enemies (Deuteronomy 28:52).

These nations are full of terrible sins today, and God is going to correct them for that! This prophecy and several others show that He will send foreign enemies to punish America and Britain!

You can already see this prophecy moving toward its fulfillment: The European Union is moving into South America, making trade agreements that are taking business away from the United States. Russia and China are militarizing the most important trade routes traversing the Asian continent.

This prophecy is being fulfilled before our eyes! America’s enemies are securing shipping lanes and creating economic alliances that will very soon enable them to choke off America’s supply lines.

It is this economic siege that will launch the world into the prophesied Great Tribulation, a time of war, violence and suffering such as was never before on this Earth (Matthew 24:21). The developments in the South China Sea are building toward this time of tribulation.

To fully understand what China is doing, how it impacts you, and your sure source of hope, please read “China Is Steering the World Toward War.”