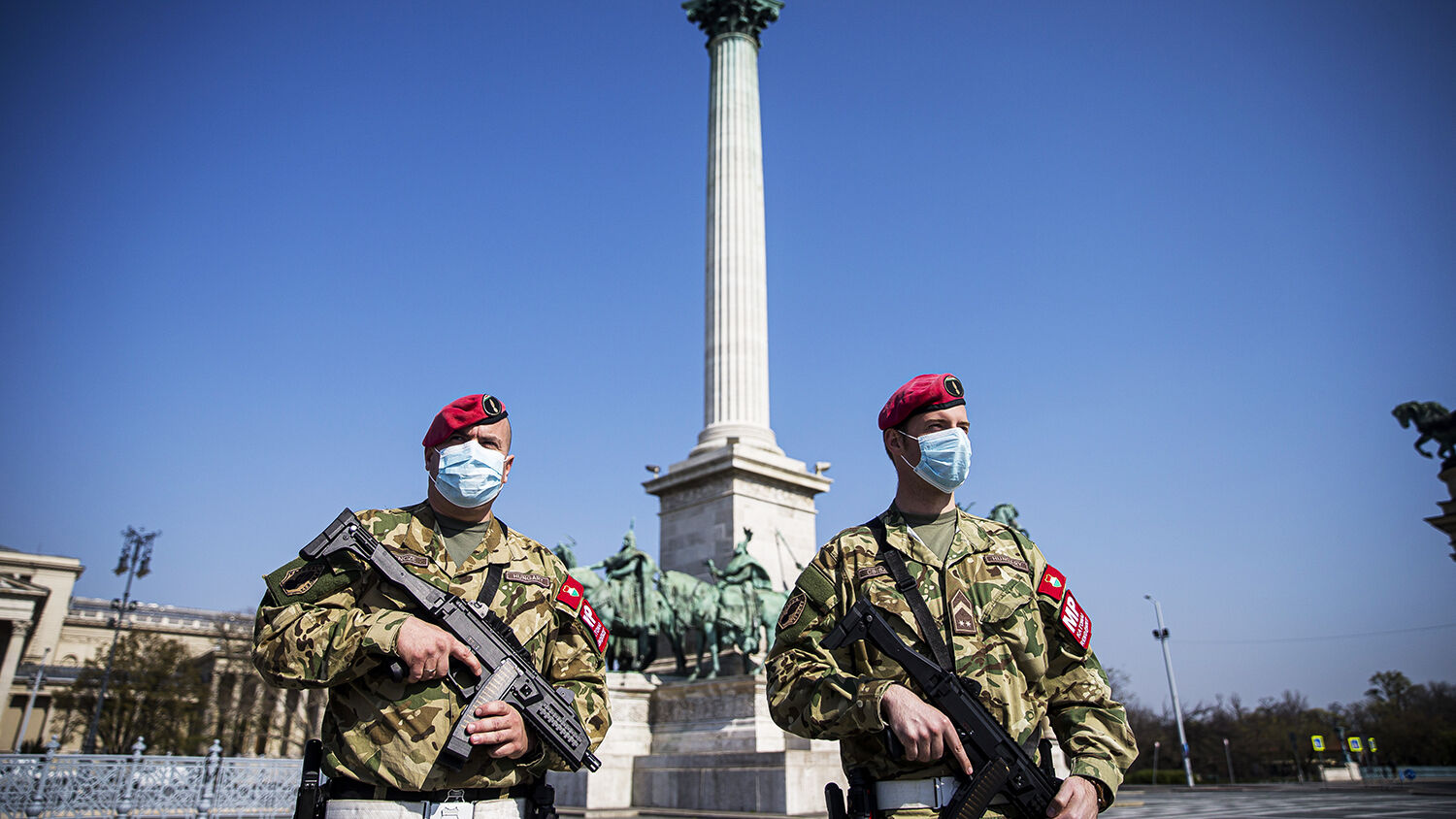 ‘If the EU does not act, authoritarianism will spread in Europe.’

What Hungarian Prime Minister Viktor Orbán did March 30 was unprecedented in Europe’s recent history. Orbán used the coronavirus crisis to abolish democracy and establish rule by decree. The Hungarian parliament approved the law, giving Orbán almost unlimited emergency powers. It seems Europe is willingly accepting a dictator in its midst.

Hungary’s parliament is now closed, elections are canceled, and anyone spreading “false” information can be imprisoned for five years. Hungarians’ freedoms are fast being abolished.

But one institution could bring enormous pressure on Orbán and possibly force a change of course: the European Union.

The EU has responded to the new Hungarian law. But the much anticipated rebuke disappointed many and caused others to laugh out loud.

“It is of utmost importance that emergency measures are not at the expense of our fundamental principles and values as set out in the treaties,” EU Commission President Ursula von der Leyen said. “Democracy cannot work without free and independent media. Respect of freedom of expression and legal certainty are essential in these uncertain times.”

She added that the Commission would monitor the application of emergency measures closely, to which the New York Times commented: “EU Tries Gentle Diplomacy to Counter Hungary’s Crackdown on Democracy.”

The rebuke, which didn’t even directly mention Hungary, will likely be of little consequence. The EU’s joint statement was so vague that even Hungary officially adopted the statement. In “Orbán Makes Fun of the EU,” n-tv.de wrote, “Orbán dismissed the European Union’s criticism of his authoritarian course in the coronavirus crisis as the work of a so-called ‘Brussels bubble.’ ‘What is Brussels doing?’ he asked on Friday on state radio. ‘It could save lives with cooperation. That would be necessary now’” (Trumpet translation throughout).

German-Foreign-Policy.com suspects that the mild rebuke is due, to a certain extent, to Germany’s acceptance of Orbán’s dictatorial course. Germany’s major political parties, the Christian Democratic Union (cdu) and Christian Social Union (csu), refrained from taking a strong stance against Orbán’s power grab.

Orbán has maintained a particularly close relationship with the Bavarian csu. For many years, he has maintained close ties with many of Bavaria’s state premiers and csu honorary chairman Edmund Stoiber, even calling him Hungary’s “friend.”

These close relationships and Orbán’s ties to the Roman Catholic Church have likely sustained his unprecedented power in Europe.

“A letter yesterday, in which 13 conservative parties from 11 European countries called for Prime Minister Viktor Orbán’s Fidesz party to be excluded from the [European People’s Party] was not supported by the cdu and csu,” German-Foreign-Policy.com wrote on April 3. “The German EU Commission President Ursula von der Leyen also took a very weak position.”

Spiegel Online noted on April 2: “Orbán’s controversial party was suspended from membership about a year ago. At that time, however, the majority was missing to exclude them—partly because the csu and cdu didn’t approve of it. The current demand has also not yet been supported by the Union.”

Orbán’s dictatorial rise didn’t start during the coronavirus crisis; it has been occurring over a number of years. Why hasn’t he been stopped?

Europe’s weak response may be linked to a growing fear that vocalized disagreements and sanctions could split the Union. It might also be an effort to conceal other nations’ controversial measures.

Germany passed an Infection Protection Act, which lawyers writing for the Frankfurter Allgemeine Zeitung criticized as a break with key lessons from “the historical trauma of the Enabling Act of March 1933.” Its article “Unlimited Enabling?” stated: “The new Infection Protection Act largely disposes the government and administration’s need to be bound by law.”

Following the Reichstag fire, Adolf Hitler forced the approval of an emergency decree that was a major step toward dictatorial rule. Although we have the advantage of looking back and learning from that history, such knowledge doesn’t prevent us from repeating those mistakes.

Many European countries have employed dictatorial measures to cope with the coronavirus crisis. Strict lockdowns enforced by the police and increased surveillance are only a few examples of government actions that would have been previously considered unthinkable.

“Hungary’s prime minister has abolished democracy,” Spiegel Online warned on April 3 in “Europe Must Stop Viktor Orbán.” “If the EU does not act, authoritarianism will spread in Europe.”

The recent crisis has shown that Europeans are quite willing to accept strong government action. If future crises arise, what will stop Europe’s leaders from extending their powers?

Orbán has set an example of how major Bible prophecies will soon be fulfilled in all of Europe.

For years, Orbán has worked in close cooperation with Hungary’s Christian churches. In 2019, he was listed in “Top 10 People” of the American monthly Catholic magazine Inside the Vatican.

Together with the Catholic Church, Orbán has led various school construction projects and church reconstruction projects in the Middle East. He also reversed the trend of secularization of Hungary’s educational system and handed the nation’s schools over to the churches.

The Roman Catholic Church is Europe’s oldest and most powerful institution. A member of the Calvinist Hungarian Reformed Church, Orbán’s alliance with the Catholic Church has more to do with his desire to extend his power than with faith.

Though he works closely with Hungary’s Calvinist churches, his alliance with the Roman Catholic Church makes his recent power grab most interesting. This alliance is likely one of the strongest reasons he has only a few critics.

For decades following World War ii, Hungary was under Soviet rule. As our free booklet He Was Right explains, it was largely due to the Catholic Church’s influence that Hungary joined the European Union.

The Trumpet’s predecessor, the Plain Truth, wrote in 1972:

This forecast is most astonishing when you realize that it was made during the Cold War, when the Iron Curtain still divided Europe. Even more astonishing, it is based on Bible prophecy.

Daniel chapters 2 and 7 and Revelation 17 reveal that the final world-ruling empire—the Roman Empire—would be resurrected 10 times. The last seven of these resurrections would occur with the help of the Roman Catholic Church, symbolized by the little horn in Daniel 7 and by the woman riding the beast in Revelation 17.

“So he carried me away in the spirit into the wilderness: and I saw a woman sit upon a scarlet coloured beast, full of names of blasphemy, having seven heads and ten horns. … And the ten horns which thou sawest are ten kings, which have received no kingdom as yet; but receive power as kings one hour with the beast” (Revelation 17:2, 12).

These kings will not be controlled by liberal Western institutions but by the Roman Catholic Church (verse 1). They will also not be democratic leaders, but as the late Herbert W. Armstrong explained; they will rule as dictators.

Viktor Orbán’s rise to power, his cooperation with the Roman Catholic Church, and Europe’s more or less acceptance of his power grab are dangerous signs that we are about to see these 10 prophesied kings emerge suddenly in Europe.

To learn more about Orbán’s recent dictatorial power grab, I encourage you to read “Coronavirus Brings the EU Its First Dictator,” by theTrumpet.com assistant managing editor Richard Palmer. Also request a free copy of “Strongman Rising in Europe,” a collection of articles by Trumpet editor in chief Gerald Flurry that explain in detail what is ahead for Europe.