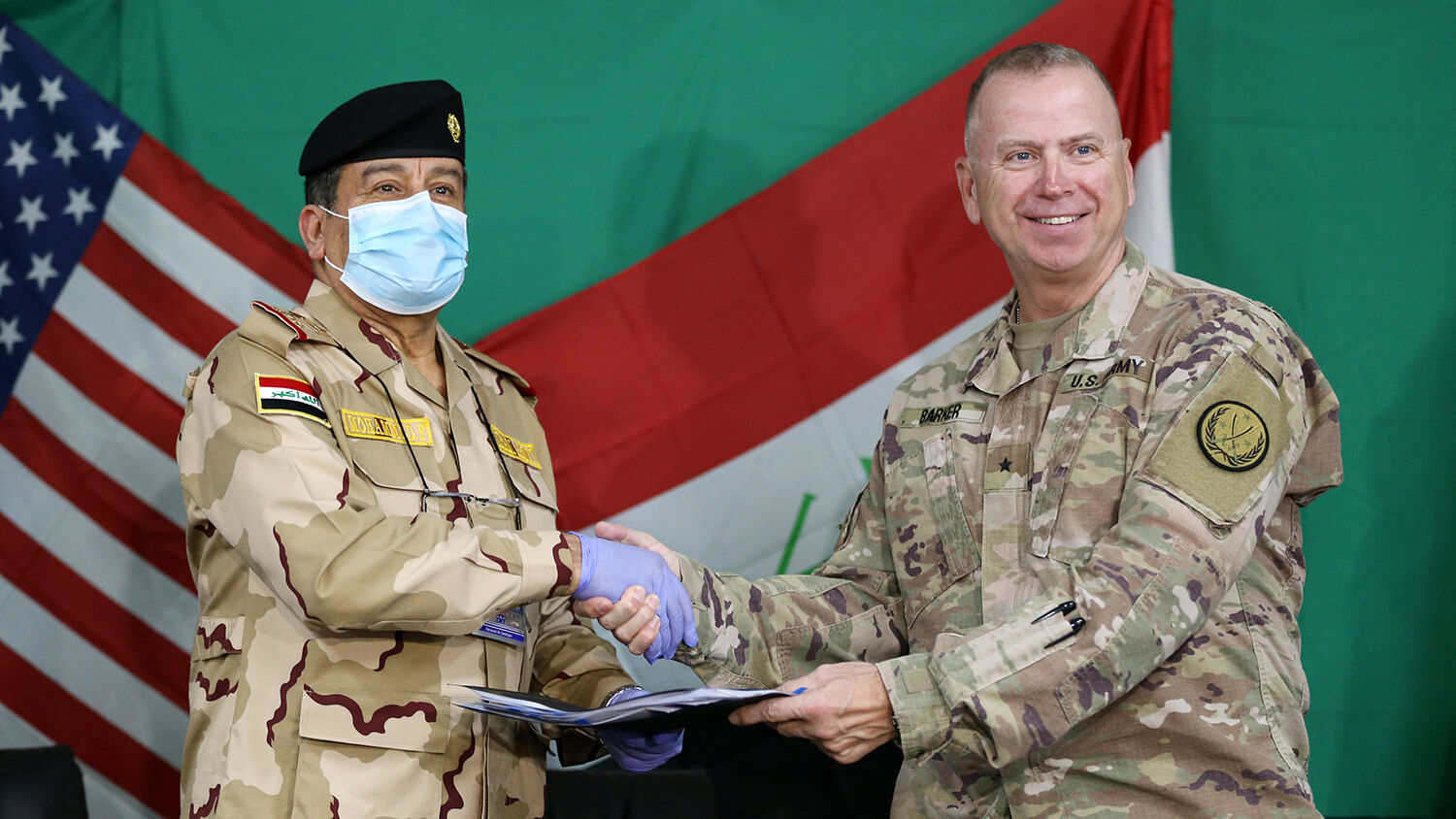 After being besieged by Iran, America consolidates troops and hands over bases.

The United States has begun a major withdrawal throughout Iraq. As it draws down its number of military bases and consolidates its troops, Operation Inherent Resolve looks to be coming to an end, and a new pro-Iran, anti-American Iraq is about to be fully realized.

On March 27, the U.S.-led coalition forces withdrew from its third site, the K-1 military base in northern Iraq, the same base where an American contractor was killed in December, which nearly ignited war between Iran and the United States. The U.S. handed the base and its approximately $1.1 million of equipment over to the Iraqi military.

In previous weeks, the U.S. and coalition forces had withdrawn from both the al-Qaim base, along the nation’s western border with Syria, and the Qayyarah Airfield in a subdistrict of Mosul, Iraq’s second-largest city.

U.S.-led coalition spokesman Col. Myles Caggins said further withdrawals were planned “in the coming days.” One of the bases he specified was the Habbaniyah Air Base west of Baghdad.

Jerusalem Post’s Seth Frantzman wrote: “The U.S. is withdrawing from six bases and posts in Iraq. … It appears the U.S. is now consolidating bases, leaving smaller posts … leaving many places that have been targeted by rocket fire and will stay in fewer locations.” Given the nature of the withdrawal, this drawdown could also include the Balad Air Base, north of Baghdad, which has also been attacked by rockets fired by Shiite militias.

Bloomberg wrote, “All the withdrawals were in line with plans to pull out from bases across Iraq and consolidate coalition forces in Baghdad and at the Ain al-Asad Air Base” and in the Kurdish capital of Erbil in northern Iraq.

While the U.S. is consolidating its troops, it has also deployed two of its Patriot air defense systems. One battery was sent to the Harir Air Base near Erbil; the other was sent to the Ain al-Asad Air Base in Iraq’s western desert. Talks regarding the deployment of the system began in January. In February, Iraqi officials recommended the drawdown as a tradeoff for deploying Patriot batteries. However, thus far, the Iraqi government has rejected America’s request to deploy the Patriot system in Baghdad, fearing the Shiite militias would see the new system as a significant threat and lead to increased violence.

“We’ve been seeing something brewing and developing pretty seriously,” a U.S. official said on April 1. “We expect something soon.” Rumors of war have been circulating in the media. According to the Jerusalem Post, pro-Iranian groups and militias have indicated they would target Americans this week. Meanwhile, in Washington, rumors are spreading that the U.S. has plans to strike and totally obliterate the Kataib Hezbollah organization, an attack in which the Patriot batteries could be used.

On March 31, Islamic Revolutionary Guard Corps (irgc) Maj. Gen. Mohsen Rezaei said on Twitter, “America should leave Iraq; otherwise Iraqis will kick them out.” An irgc statement warned that a small U.S. mistake would incur a “decisive and destructive response” by Iran.

Responding to the threat, U.S. President Donald Trump wrote on Twitter, “Iran or its proxies are planning a sneak attack on U.S. troops and/or assets in Iraq. If this happens, Iran will pay a very heavy price, indeed!”

According to the Wall Street Journal, President Trump’s warning “coincided” with the head of the irgc Quds Force Maj. Gen. Ismail Qaani’s “first known visit to Baghdad” since assuming his new role as Quds Force commander. Three months ago, former leader Qassem Suleimani was assassinated after leaving the Baghdad International Airport. Prior to the assassination, U.S. intelligence concluded that Suleimani was coordinating another attack against the U.S. Embassy and other interests in Iraq. This time there were no assassinations, just words and withdrawals. Iranian proxies have posted videos claiming that the “countdown” to a full U.S. withdrawal has begun.

America’s military involvement in Iraq began in 2003 with the U.S. invasion to oust Iraqi President Saddam Hussein. America’s 2007 troop surge made it seem that the U.S. was committed to establishing a functioning democracy in Iraq and the Middle East. But Iraqis lost hope when the Obama administration initiated a speedy troop withdrawal in 2011.

“[T]he region lost trust in American power,” Vali Nasr writes in The Dispensable Nation. Iraqis learned that the U.S. “had neither the patience nor the perseverance to see through what we started.”

To most Iraqis, the 2011 withdrawal confirmed that the U.S. was not dedicated to Iraqi freedom but to its own global interests. This power vacuum in Iraq led to the rise of the Islamic State. The terrorist organization quickly gained control of entire cities, banks and a large swath of territory. At the invitation of the Iraqi prime minister, on June 15, 2014, the U.S. dispatched troops to Iraq to help fight the Islamic State. Operation Inherent Resolve had begun. However, the wound inflicted by America’s initial withdrawal hasn’t healed. Ever since, U.S. forces have remained in Iraq at the invitation of the Iraqi government.

This is beginning to change.

Many Iraqis have lost faith in the U.S. and have turned to Iran. Throughout the war against the Islamic State, the Iran-backed Shiite militias proved to be strong allies.

Since most of the territories lost to the Islamic State have been regained, several militias formed the Fatah Alliance and ran in Iraq’s May 2018 parliamentary elections. Some of the militias in the alliance are U.S.-designated Foreign Terrorist Organizations. Nevertheless, the election resulted in the Fatah Alliance gaining the second-largest number of seats.

Iraqi Executive Order 91, enacted by former Prime Minister Haider al-Abadi in 2016, made the Iran-backed militias a state organization. That same order forbids them from entering politics. However, due to their extreme popularity, many Iraqi Shiites have overlooked this inherent disregard of the law. The same militias, which declare allegiance to the ayatollah in Iran, are now in the government working to kick the U.S. out of Iraq.

The Iraqi parliament passed a resolution on January 5 calling for the U.S. and all foreign forces to leave the country. The parliament does not hold the political authority to kick out American forces, so the resolution is merely symbolic of the direction of the Iraqi government. By law, only the prime minister has that authority. Currently, however, there isn’t a prime minister, but Iran is working behind the scenes to install its candidate of choice.

On July 1, 2019, then Iraqi Prime Minister Adel Abdul-Mahdi issued a decree ordering the Iranian-backed Shiite militias to fully integrate with the Iraqi Armed Forces. Many of its militias, including Kataib Hezbollah, openly welcomed the decree. That month, we wrote:

Full integration with the Iraqi military will also provide the militias with an extra layer of protection. The U.S. and other forces will not be able to target the militias without attacking Iraq’s official military force. Combined with rising tension in the Middle East, foreign powers are unlikely to risk igniting a regional war. Therefore, the Iran-backed militias will be able to carry out terrorist attacks against U.S. assets without facing retaliation.

We have seen this extra layer of protection already begin to benefit the Shiite militias. After the U.S. conducted retaliatory air strikes against Kataib Hezbollah locations last month after the death of two British soldiers and an American, several Iraqis came out in defiance against the U.S. air strikes. The military claimed the strikes killed members of the Iraqi security forces; the Iraqi president said the strikes were an attack on Iraq’s sovereignty; the Foreign Ministry announced that it would bring the complaint to the United Nations.

The overall message was clear: America is no longer wanted in Iraq.

The U.S. has found itself backed into a corner, unable to retaliate against the militias without receiving political backlash from the Iraqi government. As a result, its only option is retreat.

It is on this political battlefield that the U.S. has signaled retreat by deciding to drawdown its presence, withdraw from several military bases, and consolidate its troops to three locations in Iraq.

In our March 2019 issue, Trumpet Jerusalem correspondent Brent Nagtegaal described the effects of the inevitable American withdrawal from the Middle East. In “America Is Back … ing Out,” he wrote: “Every important biblical prophecy that takes place in the Middle East occurs in a power vacuum created by America’s exit. In fact, Bible prophecy indicates that the U.S. will have vacated so entirely from the Middle East that it will not impact it at all.”

One of those critical Bible prophecies is recorded in Daniel 11:40, which states: “And at the time of the end shall the king of the south push at him: and the king of the north shall come against him like a whirlwind, with chariots, and with horsemen, and with many ships; and he shall enter into the countries, and shall overflow and pass over.”

This prophetic clash occurs between a group of radical Islamic extremist nations, led by Iran (king of the south), and a united, German-led European superpower (king of the north).

For more than 20 years, the Trumpet has warned about this biblical king of the south’s rise and how Iraq would fall to Iran! This forecast has largely come to fruition. As the U.S. begins its retreat from Iraq, and from the Middle East and North Africa as a whole, leaving behind a large power vacuum, Iran will gain even more control. Continue to watch this extremely volatile region as we accelerate toward the prophesied Second Coming of Jesus Christ.

For more information, request The King of the South, by Trumpet editor in chief Gerald Flurry.