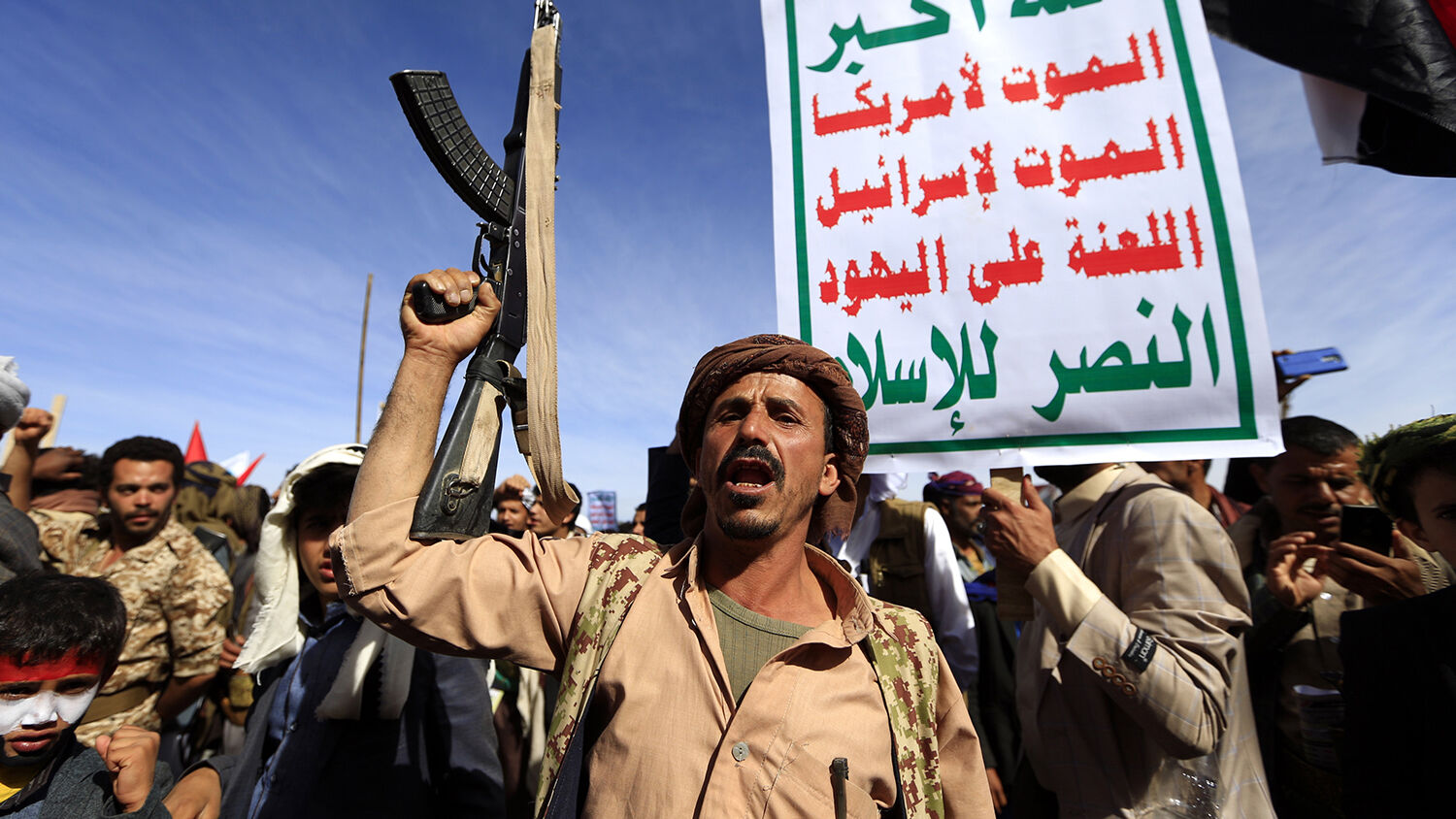 Supporters of Yemen’s Houthi rebels attend a rally in Sanaa on March 26 marking the fourth anniversary of the Saudi-led coalition’s intervention in Yemen.
MOHAMMED HUWAIS/AFP via Getty Images

Houthi’s request to release Hamas members is ‘straight out of the Iranian playbook.’

Abdel-Malek al-Houthi, the leader of the Iran-backed Houthi militia, announced the group’s “complete willingness” to exchange several Saudi captives in return for the release of Hamas members detained by the Saudi kingdom.

The Saudi captives included a pilot and four other soldiers and officers. Last month, the Houthi militia shot down a Saudi Tornado jet fighter with its new anti-air missile defense system and abducted its two pilots. One pilot is part of the exchange, but nothing was said about the second pilot.

More than just a simple captive exchange, the Times of Israel announced, “The Houthis’ unprecedented intervention in the cases of Hamas members appears to come straight out of the Iranian playbook.”

Hamas thanked the Houthis in a statement, writing, “We greatly appreciate the spirit of brotherhood and sympathy with the Palestinian people and support for their steadfastness and resistance. We express our thanks for this interest and this self-initiative.”

Enter Iran. In last week’s Trumpet Hour radio program, Jerusalem correspondent Brent Nagtegaal explained that five years ago, at the beginning of the Yemeni Civil War, the Obama administration denied that the Houthis had any connection to the Iranian regime. As far as the world was concerned, the Houthis were just another terrorist organization. The majority fail to recognize that Iran is the head of the terrorist snake—a truth the Trumpet has been warning about since November 2001.

Iran has a long history of supporting the Houthi militia (for more information, read “The Houthis and Iran’s Red Sea Strategy,” from our March-April Watch Jerusalem issue). Iran has provided the Houthis with anti-air defense systems, drones, funding, missiles of various types, sea mines, training, weapons and much more. The Houthis follow a sect of Shia Islam. This Shia bond partially explains Iran’s support for the Houthis.

But Iran has also proved willing to support Sunni terrorist organizations, such as Hamas. The fact that Iran demanded the release of Hamas members rather than Houthi shows that it currently places a higher priority on Hamas’s mission to take over the West Bank during a time when Palestinian frustrations are high amid United States President Donald Trump’s peace deal and Israel’s Benny Gantz turning his back on the Arab Joint List.

The Trumpet has based these forecasts on sure Bible prophecies. Nearly 2,500 years ago the Prophet Daniel wrote an end-time prophecy about a Middle Eastern power called “the king of the south” pushing the world toward war (Daniel 11:40). This king of the south will have an aggressive foreign policy. Its pushiness will lead to a terrifying clash of civilizations between a Catholic European military superpower and a radical Islamic alliance in the Middle East and North Africa, led by Iran.

Already, Europe is watching the rise of this king of the south. Estonia’s ambassador to nato claimed that nato ministers have agreed that Europe must address the “threats emanating from the south” to a “greater degree.”

Far from a simple captive exchange, last week’s events with the Houthi and Hamas prove that Iran is the head of the terrorist snake. As Iran rises in power, exerts more control over its terrorist proxies, and unites radical Islam under its command, its role as the biblical king of the south becomes more and more irrefutable.

For more proof, read our free booklet The King of the South, by Trumpet editor in chief Gerald Flurry.