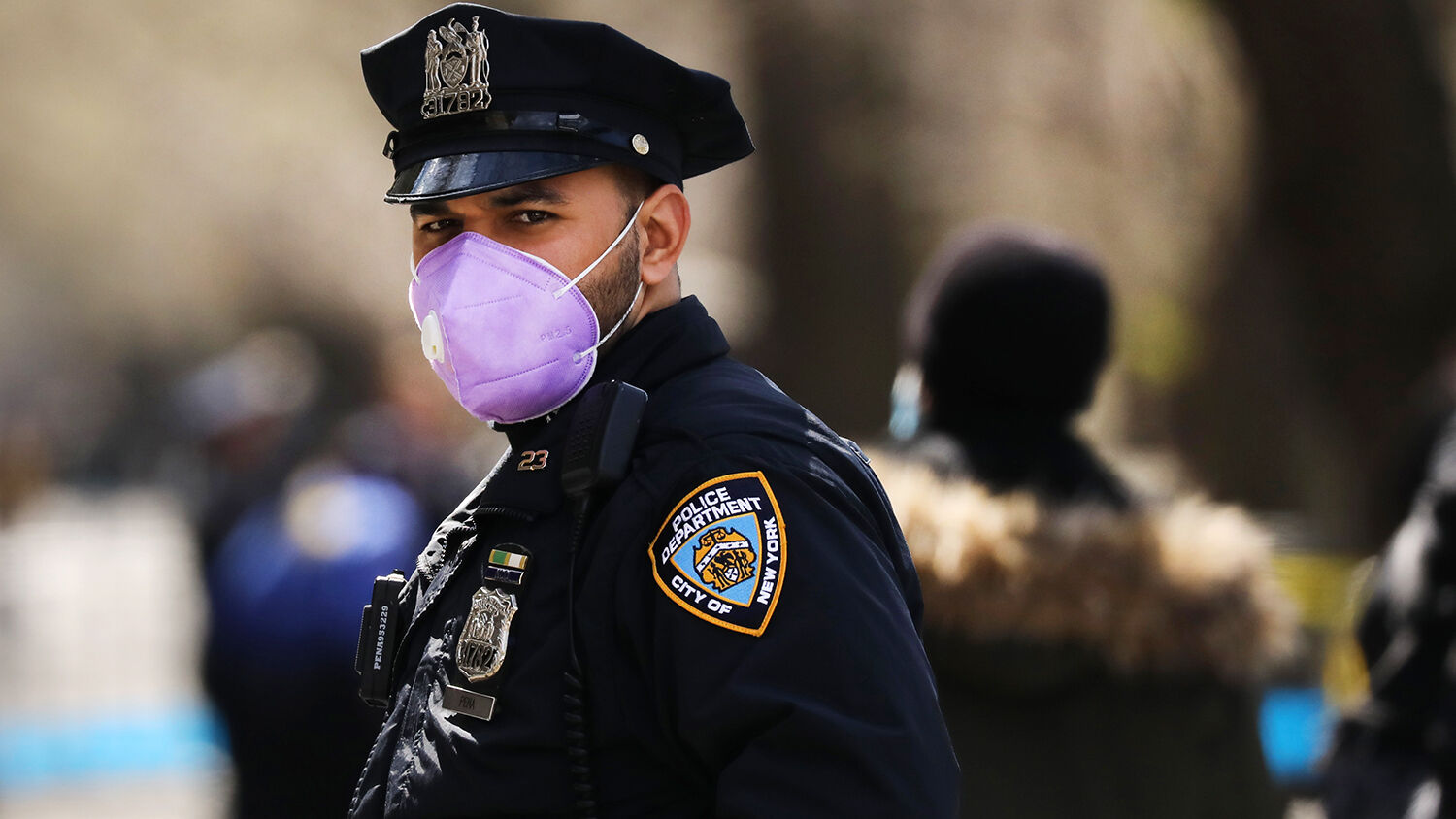 A police officer stands outside of Mount Sinai Hospital amid the coronavirus pandemic on April 1 in New York City.
Spencer Platt/Getty Images

Are Americans becoming more willing to give up their freedom?

Thirty-one American states are now on lockdown. Citizens are forbidden to leave their homes except for essential tasks, such as shopping, exercise or work that cannot be done from home. They must also practice “social distancing” by remaining six feet away from others at all times.

Rules vary by state. Washington has banned all public gatherings, even religious services, weddings and funerals. Others, like Oklahoma, have chosen to keep parks open and still allow people to travel by public transit.

United States President Donald Trump declared a national emergency on March 13 and recommended that Americans stay at home beginning March 17. He restricted public gatherings to groups of 10 or less and directed everyone to avoid nonessential travel as much as possible. On April 2, he extended these guidelines until April 30.

#NEW: President Trump is extending social distancing guidelines to April 30 and says the coronavirus outbreak in the U.S. will likely to peak in two weeks.

He also says the country will be on its “way to recovery” by June 1. pic.twitter.com/OXwneHzOp8

While the exact rules vary from state to state, the response by some authorities reveals a nation willing to give its constitutional freedoms away.

Around 265 million people, or 80 percent of the U.S. population, have been told to stay home. According to the Constitution, a national lockdown is not enforceable. But that isn’t preventing states from seeking greater powers to control and even arrest citizens.

In New York, owners of bars and restaurants are now subject to arrest if they open their establishments during the lockdown period. This came as an executive order from Mayor Bill de Blasio.

One Kentucky man who caught the virus refused to self-isolate. The county sheriff immediately swept in, enforcing his isolation by posting armed police officers around his house at all hours of the day and night for two weeks.

In other areas, government crackdowns have essentially violated the First Amendment. On March 30, Rodney Howard-Browne, a pastor from Tampa, Florida, decided to hold worship services in violation of the state’s prohibition on large gatherings, which includes those for religious purposes. After seeing pictures posted online, the county sheriff became “furious” and decided to arrest Howard-Browne.

In Newark, New Jersey, the Department of Public Safety warned residents that they could be criminally prosecuted for spreading “fake information” about the virus and causing “unnecessary public alarm.” This is a dangerous violation of the First Amendment. It is a vague statement with no clear definition of what would fall into that category.

Abortion clinics in Virginia remain open to the public, as they are considered essential. State officials from Mississippi, Ohio and Texas opposed this, arguing that abortion can be put off and clinics should be closed so that their medical supplies can be used to fight the virus. However, clinics in Ohio refused to close, and some in Texas have filed a lawsuit against Gov. Greg Abbott. Alabama voted to close abortion centers, but a federal court issued a restraining order, keeping them open. While abortion is coming to be looked on as a constitutional right, religion has taken a backseat. All places of worship have been declared to be nonessential.

California is fining residents who venture outside. It has also failed to list a free press as part of the state’s “critical infrastructure” as others have. The stay-at-home order hints that residents may venture outside for food or to care for those in need but does not explicitly allow it. While these activities will likely be permitted, Bloomberg noted, they are technically illegal because they are not explicitly mentioned. This gives state authorities a concerning level of power.

On March 17, the Seattle Times reported that the U.S. government was holding talks with Facebook, Google and other tech companies in hopes of finding a way to access data on millions of Americans, primarily through their smartphones. This would primarily be location data, used to indicate whether people were abiding by government advice to stay home and keep a safe distance from others.

The Seattle Times acknowledged that this is a “powerful tool” that is also likely to make Americans uncomfortable. The reality is that it could be a powerful tool in the hands of more than just health authorities.

Unacast, a company that processes location data for businesses, is already harnessing its data to rank each state according to how well its people socially distance themselves—based on tracking mobile phone signals and average movement. It’s not hard to see how an information-hungry government could misuse this capability.

Expanding government power such as is happening with coronavirus is what the America’s founders sought to prevent. The Constitution was built on the fundamental premise of preventing government overreach.

Attack on the Constitution

Some state laws are likely already in violation of their own constitutions. The American Spectator commented that many of the stay-at-home orders could violate the U.S. Constitution and end up being struck down, especially if they are not relaxed within a reasonable amount of time.

Many state constitutions mention the concept of inalienable rights. California’s states, “All people are by nature free and independent and have inalienable rights. Among these are enjoying and defending life and liberty, acquiring, possessing and protecting property, and pursuing and obtaining safety, happiness and privacy.” California lawyer Mark Meuser told the American Spectator that his state’s lockdown violates the privacy of its citizens. Not being allowed to work also impinges on their ability to maintain property.

Now back to our question of whether the government—state or federal—can confine persons against their will in order to protect public health. The short answer is yes, but the Constitution requires procedural due process. That means a trial for every person confined.

Thus, a government-ordered quarantine of all persons in a city block or a postal zip code or a telephone area code would be an egregious violation of due process, both substantive and procedural. Substantively, no government in America has the lawful power to curtail natural rights by decree.

Procedurally, notwithstanding the fear of disease contagion, the states and feds may only quarantine those who are actively contagious and will infect others imminently. And it must present evidence of both at a trial at which it bears the burden of proof.

President Trump has been faced with this decision himself. He must decide daily how much power government agencies will have to police the coronavirus lockdowns. Making it more difficult for the president, the press has been continually pressuring him to make fast decisions and extend surveillance powers of government agencies.

Self-quarantine during sickness is a sound principle. However, “bipartisan support for rights-restricting covid-19 responses could smooth the path for constitutional erosion,” warned the Atlantic. “After the threat has subsided, Americans must recognize any constitutional violations for what they were, lest they become the new normal.”

The Atlantic conducted a survey, giving eight options of how the government should respond to coronavirus—and explicitly stated that all of them are unconstitutional. The result? Criminalizing free speech received support from 70 percent of respondents, 77 percent supported banning religious gatherings, and 58 percent endorsed government seizure of businesses.

One might think this was the result of surveying a largely left-wing audience. It’s not. “Perhaps the most striking feature of our results is the broad bipartisan endorsement of these liberty-restricting policies,” wrote the authors.

America’s freedom was paid for in blood. Compared to what the U.S. has endured throughout its history, coronavirus is a relatively small crisis. Yet a majority of U.S. citizens appear willing to trade their constitutional freedoms to the government in exchange for a dubious assurance that they won’t get sick or die.

What’s happening in America is fundamentally dangerous to democracy. While it is logical to issue guidance during a virus epidemic, the danger is that freedom, once taken away, may never return to what it was before.

The force that wants to take away American liberties is nothing new.

“Liberals in academia, the media and in government don’t believe governing officials should be restricted by the limitations imposed by the Constitution,” wrote Trumpet editor in chief Gerald Flurry in “Saving America From the Radical Left—Temporarily.” They are ignoring the fundamental reason why the founders put so many limits on government in the Constitution. “America’s founders imposed those restrictions to prevent tyranny!” he explained. “The protections afforded by the Constitution have allowed God to bless this nation tremendously. They prevent a dictator from seizing control of the nation’s unmatched resources.”

It’s not hard to see examples of such tyranny around the world. Mr. Flurry warned that “government tyranny is routine in human history.” Hungarian Prime Minister Viktor Orbán’s attack on the rule of law in Hungary is an example of how quickly this can happen.

In America, it is not a right-wing dictator that is undermining the nation’s freedom. It’s the radical left.

“Their aggressive attack on the rule of law is chopping at the pillars of our nation!” wrote Mr. Flurry. “Had Hillary Clinton been elected, the destructive trends that unfolded during the Obama presidency would have continued unchecked, and they surely would have intensified. Many people—including me—believe it would have meant an end to our constitutional republic!”

The reason the radical left are able to attack the Constitution is that America is forsaking God. The Bible predicted long ago that this would happen, and that it would be restrained—temporarily—by a strong president. However, the anti-God approach to law that is destroying America isn’t going away just yet.

To learn what’s behind the attack on America’s Constitution, and what it means for the future of the world’s most powerful free nation, read America Under Attack, by Gerald Flurry.