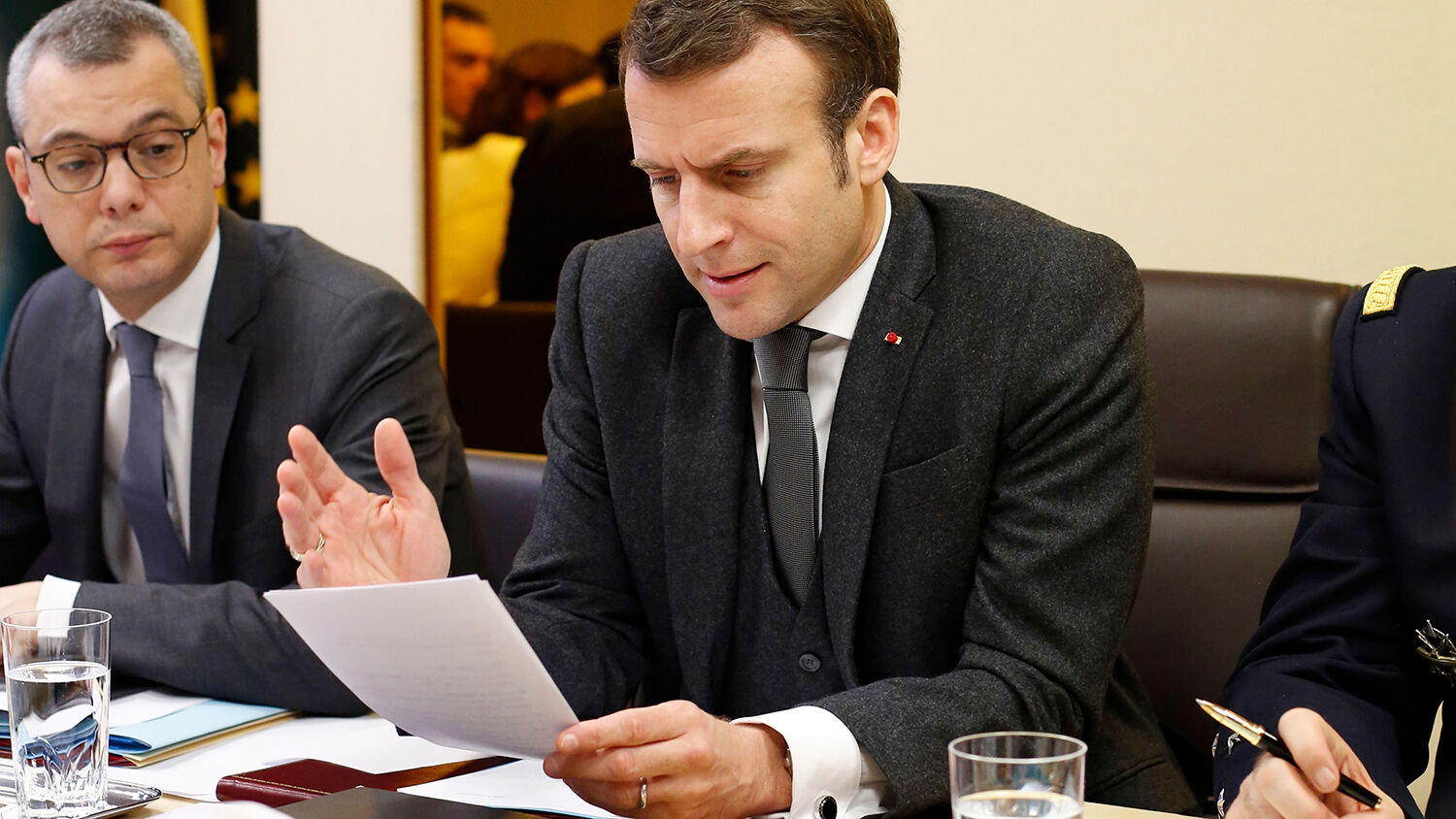 President Emmanuel Macron attends a Defence Council at the Elysee Palace, in Paris, on March 4, 2020.
THIBAULT CAMUS/POOL/AFP via Getty Images

Emmanuel Macron’s popularity is rising as he leads France into a new war.

French President Emmanuel Macron has taken drastic actions to combat the spread of coronavirus in France. In doing so, he is pressuring other European leaders to do the same. His “popularity rating jumped to a more than two-year high, according to an opinion poll published on Friday,” France 24 reported, “edging past the 50 percent mark for the first time since 2018 as voters give his handling of the coronavirus crisis a vote of confidence.”

The French were quick to forget the waves of protests against Macron’s past decisions. The whole country is now looking to his leadership. The crisis presents him with a chance to solidify his rule as France’s strongman. But what most don’t realize is Macron’s actions are ultimately playing into Germany’s hands.

Like other countries around the world, France wasn’t prepared for the coronavirus crisis. Its economy is threatened by recession and its hospitals are overburdened with patients. Some patients have even been transferred to Germany for critical treatment.

The people in France are glued to Macron’s speeches. His address on March 12 reached 25 million French viewers, breaking all previous records. But that record was soon broken: On March 16, his address reached more than 35 million people—96 percent of television viewers.

“What the French president announced, after the sounds of [the French national anthem], in his television address sounded like a general mobilization,” faz.net noted (Trumpet translation throughout). “France is at war against an ‘invisible enemy,’ he told his compatriots. Just so no one would miss the message, he repeated the word war six times. … After Macron’s war speech, there was primarily applause. Even the left-wing populist Jean-Luc Mélenchon, who would like to overthrow Macron, spoke of ‘national unity’ and called for solidarity.”

Macron’s warlike terminology may sound strange to outside observers. But he chose the perfect words to rally France behind him. Die Welt noted: “Unlike [German Chancellor Angela] Merkel, Macron now acts as the nation’s commander in chief, who he de facto is.” Macron did not only call the crisis “a public-health war,” he also deployed the French Army and used war rhetoric and military metaphors to talk about the “invisible enemy.”

The enemy is real, though not as lethal as some claim. Yet the people are scared. That’s why even Macron’s lockdown of many French businesses and most public life is widely accepted. “Emmanuel Macron presents himself as a warlord in the fight against coronavirus—and as a leader of Europe in the crisis,” Die Welt explained. “The yellow vest crisis and months of protests against pension reform seem to have been forgotten. According to the Ipsos Institute’s latest survey, 55 percent of citizens believe that the government is ‘fighting the virus effectively.’”

The streets that were previously filled with protesters and lit by burning cars are now empty, as most citizens diligently follow Macron’s orders.

On March 17, the French populous was no longer allowed to leave their homes without a certificate. The bureaucratic measures included certificates for people to walk their dogs, go shopping, and attend work. In accordance with the new rules, shopping and exercise must be limited to one hour and can’t take place further than one kilometer from one’s home. Transgressors can be fined between €135 and €1,500 (us$146 and $1,620) for repeat offenders.

“Five days into lockdown, on March 21,” the British Spectator noted, “French Interior Minister Christophe Castaner—whose brutal repression of the [yellow vest movement] is legendary—boasted on Twitter about the achievements of his 100,000 police tasked specifically with enforcing ‘confinement’: 867,695 individuals checked by the police, 38,994 fines issued. He didn’t detail the hundreds arrested for the French crime of ‘endangerment’—putting other people’s lives in danger—punishable by six years’ imprisonment.”

“I haven’t moved from home for the past four or five days, but outside it’s surrealistic,” Gerald Carmont, a 60-year-old Frenchman working in educational services just outside of Paris, told cnbc over the phone. “It’s like you’re living in a death place.”

France continues to struggle to keep rebels down, but now most view the measures as justified. The people yearn to return to a routine, believing that if they follow the government’s orders it will come sooner rather than later.

“In France, after a week of curfew,” Die Welt noted, “the overwhelming majority of citizens understand that without an intermittent, possibly lengthy renunciation of individual freedoms and pleasure, this epidemic will not be contained.”

Macron has had to deal with many setbacks in recent months. One of them was Brexit. Britain officially left the European Union on January 31. In some cases, it seemed Prime Minister Boris Johnson was gaining the upperhand in negotiations with the EU. This, of course, was to the great displeasure of Macron, who likes to view himself as the de facto leader of Europe and defender of the Continent’s unity.

In the coronavirus crisis, Macron was able to achieve an apparent victory. He told Johnson on March 20 that he would close France’s border to the United Kingdom if Johnson continued to refuse to take more restrictive measures to contain the coronavirus.

Macron, at the time, was upset that no more major European leaders were following his lead, causing him to look extreme. Johnson eventually ordered the shutdown of schools, pubs and restaurants and asked that people stay indoors.

Britain’s tougher measures cause Macron to shine. Hesitant leaders look weak. Even if Macron’s actions are too extreme, the fact that others are taking similar actions now make the measures appear justified. People are now thankful for his leadership.

Throughout his time in office, Macron has appeared to rise to Europe’s leadership. He has criticized the United States and Britain. He has called for greater unity within Europe. But in all this, as Trumpet editor in chief Gerald Flurry has explained, a “clear trend is taking place: President Macron demands what Germany wants.” Mr. Flurry continued in “France Is Resurrecting the Holy Roman Empire”: “I don’t believe Macron would ever say what he said unless Germany approved of it. He acts as a sort of puppet to Germany!”

Germany eventually took steps to contain the virus, but its no-contact policy and ban of all gatherings of more than two people looks mild compared to Macron’s measures.

In World War ii, the German war machine relied on a submissive populous. Since the war, however, Germans have been reluctant to trust their government. But the recent crisis and how various leaders are dealing with it have caused many in Europe to trust and look to their own governments once again.

Out of all the nations in Europe, Germany was the most prepared for this crisis. It has been saving money for years and has invested heavily in its health-care system. Though the crisis will certainly take a toll on Germany, lockdowns will harm the rest of Europe much more. The crisis will thus solidify Germany’s economic rule in Europe.

Macron is leading Europe into lockdown and effectively tying Europe’s economic needs to Germany. In a very subtle way, he is helping Germany take on more leadership in Europe and appear moderate, in doing so.

Macron is thus fulfilling Bible prophecy. The Bible reveals that in the end time, 10 kings, who are all anchored and submissive to Germany, will rise in Europe. Revelation 17:12-13 read: “And the ten horns which thou sawest are ten kings, which have received no kingdom as yet; but receive power as kings one hour with the beast. These have one mind, and shall give their power and strength unto the beast.” Concerning this prophecy, Mr. Flurry wrote:

This prophecy shows that the European Union, currently at 28 nations, will be pared down to 10 kings. Britain has already withdrawn from the EU. Others will follow or be kicked out.

Verse 13 shows that these 10 kings will all have one mind—and it will be revolving around the German mind and the Holy Roman Empire mind. These kings will “give their power and strength unto the beast.” This is a prophecy that these nations will be anchored to Germany! France of all countries is the first to admit it!

These 10 kings are prophesied to rule as dictators. Macron’s recent lockdown of France gives us a glimpse into what that may look like. Citizens are getting used to the rule of strongmen. They are being forced to rely on what the government tells them to do and concede their normal freedoms.

The role President Macron is playing in Europe and Bible prophecy is utterly unique to that of any other current leader, as Mr. Flurry explained in “France Is Resurrecting the Holy Roman Empire.” Read his article to gain an in-depth study into Macon’s leadership, his ambition and what this means for Europe and you personally in light of Bible prophecy.