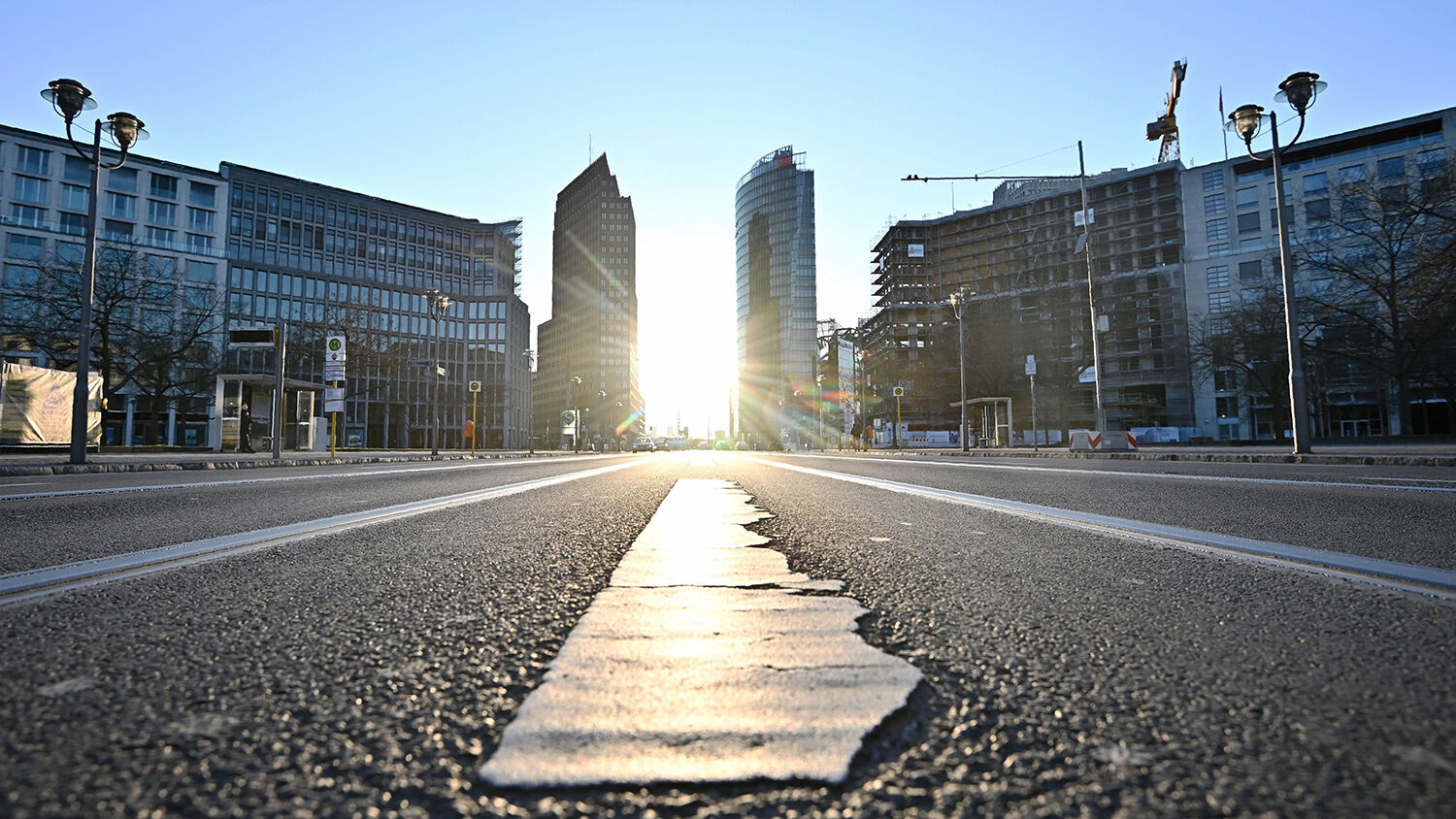 The Potsdamer Platz square in Berlin is almost empty on March 24 amidst the new coronavirus covid-19 pandemic.
TOBIAS SCHWARZ/AFP via Getty Images

The coronavirus crisis is a prelude of a far greater crisis about to hit Europe.

German Chancellor Angela Merkel referred to the coronavirus crisis as Germany’s greatest challenge since World War ii. Over the weekend, she announced a ban of public gatherings of more than two people. Most people are willingly complying with the new measures, and some are even calling for stricter laws.

Within a few days, the lives of millions in Germany have drastically changed. But the crisis is just a prelude of a transformation Germany is about to undergo. In many ways, the current crisis is laying the foundation for a much larger crisis to hit Europe.

On Sunday, Chancellor Merkel published a nine-point plan in the fight against coronavirus. After numerous debates, the federal and state governments finally agreed on a contact ban that is viewed as the last measure before confining people to their homes. According to the ard Germany trend, 95 percent of respondents support the contact ban, despite the economic consequences it will bring.

Other European countries have taken stricter measures, urging Germany to do the same.

“Not since German reunification, no, not since World War Two has there been such a challenge to our country.”

German Chancellor Angela Merkel delivers an historic address to the nation regarding the coronavirus outbreak. pic.twitter.com/pwtm1TYAGz

The coronavirus is spreading rapidly in Europe. Ms. Merkel herself had to go into quarantine after having contact with an infected doctor. Merkel is still trying to display stability. However, her potential successors using the crisis to present themselves as crisis managers.

Germany’s comparatively moderate measures and the leadership crisis have caused many to look to neighboring governments for direction.

German Chancellor Angela Merkel is currently in quarantine after being in contact with a doctor who tested positive on #Covid19.

What happens if Merkel can’t work?

And what are the newest coronavirus restrictions in Germany?

“States in which the virus started to spread only a few days earlier have already shut down or initiated it,” faz.net noted on March 16. “In addition to Italy, France, Spain and Austria have now closed all shops and completely frozen social life—Germany is lagging behind. This is extremely dangerous because we are accepting an unabated increase in the number of cases.”

In Austria, Chancellor Sebastian Kurz has already enforced confinement measures, weeks prior to Germany. His clear orders have, for the most part, been diligently obeyed. Zeit Online noted that this may cause people to “accept restrictions on liberties sooner than before” and “the longing for the proverbial strongman, who will finally take action, will grow stronger.”

Kurz made decisions that applied to the whole nation equally. But Merkel has been forced to coordinate with the heads of respective German states to find a unified approach. The lost time in debates has been criticized abroad and at home. Some have even asked for changes to be made to the Basic Law that would grant the federal government more power.

Germans are looking to the leadership of French President Emmanuel Macron. In “Does General Macron Really Do a Better Job Than Merkel?” Die Welt noted: “Unlike Merkel, Macron now acts as the nation’s commander in chief, who he de facto is.” Macron did not only call the crisis “a public-health war,” he also deployed the French Army and used war rhetoric and military metaphors to talk about the “invisible enemy.” In doing so, his approval rating rose.

“Emmanuel Macron presents himself as a warlord in the fight against coronavirus—and as a leader of Europe in the crisis,” Die Welt explained. Macron has made his fair share of mistakes, and the death rate of the virus is far greater in France than in Germany. Still his popularity is rising in France and throughout Europe. People long for strong leadership, even if the end result doesn’t match the promises.

“The yellow vest crisis and months of protests against pension reform seem to have been forgotten,” Die Welt continued. “According to the Ipsos Institute’s latest survey, 55 percent of citizens believe that the government is ‘fighting the virus effectively.’”

Germany’s reaction to the crisis seems rather moderate. At the time Merkel announced the nationwide contact ban, only around 90 people in Germany had died from the virus. In numbers, the crisis is comparatively small. But the people’s willingness to give up their freedom is unprecedented.

The German Army is only allowed to be deployed in a national emergency. Many have tried to change this law, but heavy protests have always resulted. But with coronavirus, the state of Bavaria declared a disaster situation with immediate effect, allowing for the Army to be drafted. The citizens seem to be accepting the measure as necessary. Then again, no one can join a demonstration when public gatherings are prohibited. Disobedience to government orders is subject to high fines.

Few seem to recall that a manufactured emergency in 1933 enabled Adolf Hitler to pass the Reichstag Fire Decree that paved the way for his dictatorial power grab. In times of crisis, dictators rise.

The recent crisis has already caused the German economy to face major setbacks. President of the German Federal Bank Jens Weidmann warned in an interview with Der Spiegel that “slipping into a pronounced recession cannot be prevented.”

The fact that many Germans are willing to give up their freedoms in a considerably minor crisis is an ominous sign. The late Herbert W. Armstrong predicted that Europe’s unification and the rise of a European strongman could be the result of a major economic crisis that “could suddenly result in triggering European nations to unite as a new world power, larger than either the Soviet Union or the U.S.” (co-worker letter, July 22, 1984).

It’s a rare time in history when the people and media demand stronger government action and are willing to sacrifice their freedoms.

Hungarian Prime Minister Viktor Orbán is one European leader who is exploiting this crisis. He drafted an emergency bill that would grant him “sweeping powers to rule by decree,” the Guardian wrote. Under the new law, “Hungary faces a ‘transition to dictatorship,’” the Austrian Kurier warned. The bill is expected to pass in the second hearing.

It is becoming more evident that in crises, people are willing to accept the rise of strongmen. They yearn for unity and leadership.

A prophecy in Revelation 17 says that Europe will unite under one leader, possibly during a time of global crisis. “And the ten horns which thou sawest are ten kings, which have received no kingdom as yet; but receive power as kings one hour with the beast. These have one mind, and shall give their power and strength unto the beast” (verses 12-13).

The Bible indicates that the people of Europe will willingly accept the rise of this dictator. Revelation 13 describes how this leader will take drastic measures that cut deep into the freedoms of every citizen. No one will be able to buy or sell unless they follow the government’s dictatorial rules.

The coronavirus crisis shows how Europe responds in a crisis. Germany is at the economic heart of Europe. Its changing mood and willingness to accept stronger government action, and its longing for stability and unity, are strong indications that many biblical prophecies are on the verge of being fulfilled.

Order your free copy of A Strong German Leader Is Imminent and read “How the Global Financial Crisis Will Produce Europe’s 10 Kings,” by Trumpet editor in chief Gerald Flurry, to find out how quickly Germany and Europe will change in a prophesied crisis.