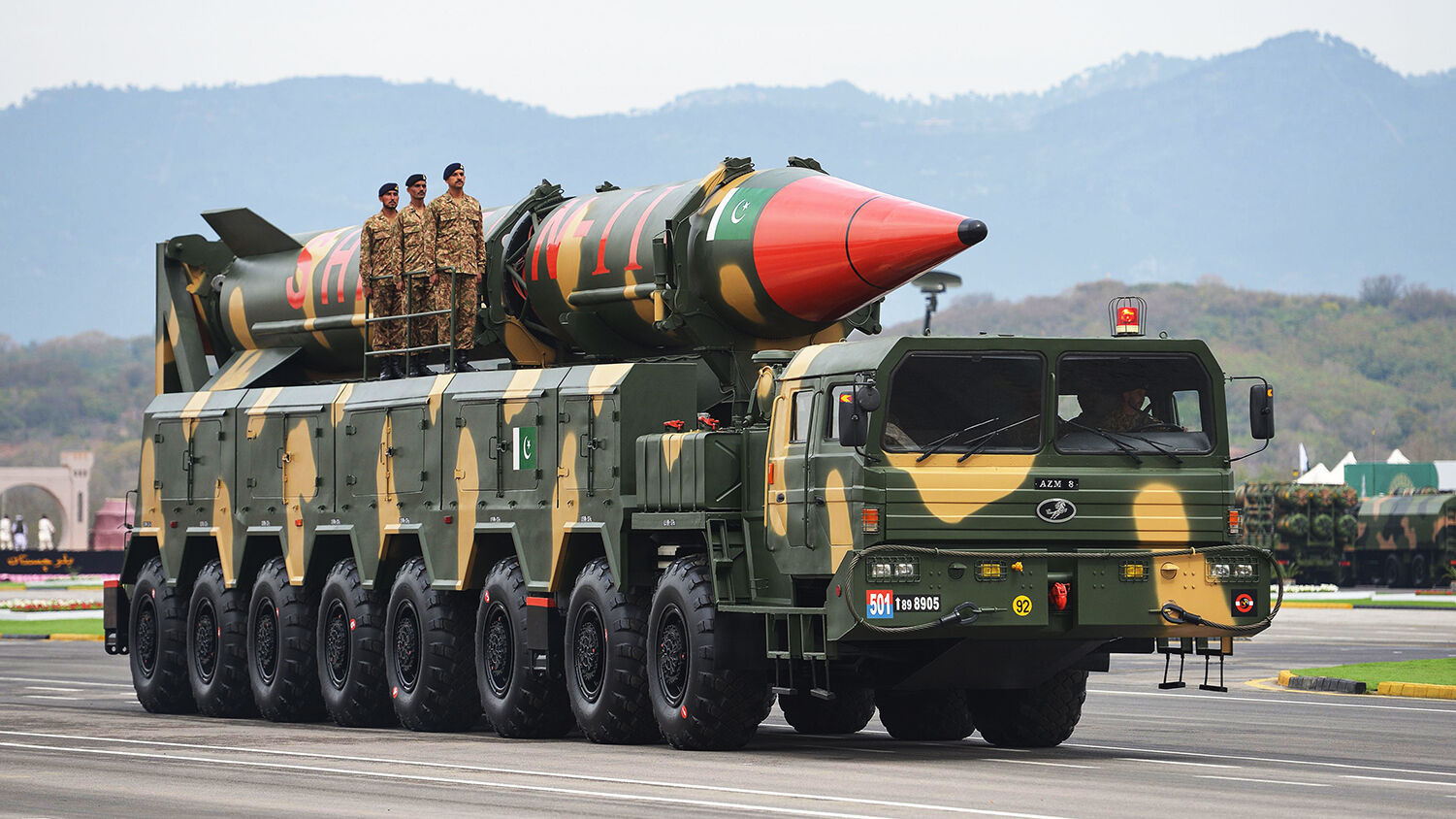 A long-range ballistic Shaheen ii missile is displayed during the Pakistan Day parade in Islamabad on March 23, 2019.
FAROOQ NAEEM/AFP via Getty Images

How difficult would it be for one of the nation’s ruthless terrorist groups to gain control over its nuclear arms?

Pakistan successfully test-fired a new version of its Ra’ad ii nuclear-capable air-launched cruise missile on February 16, in the latest sign of the nation’s thermonuclear weapons advancement.

The Pakistan military’s Inter-Services Public Relations (ispr) said in a statement that the new version of the Ra’ad ii can travel up to 375 miles, nearly twice the range of the earlier model. It noted that the missile is “equipped with state-of-the-art guidance and navigation systems ensuring engagement of targets with high precision.” The combination of the longer range and the precision navigation “significantly enhances” the military’s “air delivered strategic standoff capability on land and at sea,” the ispr said.

A video accompanying the ispr statement shows the weapon being launched from one of the Pakistani Air Force’s Mirage iii fighter jets:

The successful launch underscores how far Pakistan’s nuclear weapons program has come since 1998 when it became the first Islamic nation to join the short list of nuclear-armed powers. Since its first successful nuclear detonation in May of that year, Pakistan has steadily developed more powerful, more compact and more numerous nuclear warheads—and, as evidenced by the new Ra’ad ii variant, more deft systems to deliver them.

Meanwhile, parts of Pakistan have become hotbeds of intensifying Islamic radicalism, which calls the security of these unfathomably destructive weapons into question. “Pakistan is the most dangerous country in the world,” Michael Morell, a former acting Central Intelligence Agency director, told Axios in 2018. “[A]nti-state jihadist extremism is growing in Pakistan, creating the nightmare society down the road: an extremist government in Islamabad with nuclear weapons.”

The Pakistani military has control over the nation’s 70 to 90 nuclear weapons. But the military routinely works with some of the most dangerous terrorist groups on the planet, including the ruthless Haqqani branch of the Afghan Taliban. The Brookings Institution noted, “Pakistan has provided direct military and intelligence aid” to the Haqqani, which has resulted in “the deaths of U.S. soldiers, Afghan security personnel and civilians, plus significant destabilization of Afghanistan.”

Despite the chaos such jihadist groups sow, Pakistan’s military, even at the senior levels, keeps funding and supporting them. The trend has spawned fears that Islamic terrorists could soon gain control over the nation’s nuclear weapons.

Nabil said he is “skeptical about Pakistan’s ability to keep its nuclear weapons safe from extremists,” and warned that the international community “must take action to prevent a global catastrophe before it is too late.”

The Trumpet has often warned of the danger of Pakistan and its increasingly advanced nuclear arsenal falling into the hands of Islamists radicals, particularly those with ties to one of the world’s other Islamic Repbulics. In our January 2008 issue, editor in chief Gerald Flurry wrote: “Pakistan also has the nuclear bomb and could be taken over by radical Islam, with plenty of help from Iran.” The nation’s military could soon become a “proxy of the Iranian mullahs,” he wrote.

Whether Pakistan’s nuclear weapons fell under the control of Iran-linked jihadists, homegrown terrorists or some other faction, the results could be catastrophic.

During His ministry on Earth, Jesus Christ warned of the modern age of nuclear proliferation, saying it would indicate that the end of the age of man’s rule over man was near, and that His return was imminent: “For there will be greater anguish than at any time since the world began. And it will never be so great again. In fact, unless that time of calamity is shortened, not a single person will survive …” (Matthew 24:21-22; New Living Translation).

At the time that Christ spoke those words in the first century, a war that could threaten to slaughter every “single person” was not technologically possible. But today, with at least nine nations in possession of thousands of nuclear warheads, and with the security of Pakistan’s nuclear weapons so much in doubt, the conditions are right for this prophecy to be fulfilled.

Yet as we see nuclear cataclysm looming on the horizon, there is reason for hope! In verse 22, just after Christ stated that the war at the end of this age would be so destructive that it could end all human life, He added a crucial statement: “But it will be shortened.”

Nuclear World War iii will be interrupted! Just before the nations detonate enough weaponry to wipe out all human life, Jesus Christ will cut the conflict short. After the time of unprecedented war, He will bring in a new era of unprecedented peace and security. Regarding this future epoch of worldwide harmony, Isaiah 2:4 says: “[N]ation shall not lift up sword against nation, neither shall they learn war any more.”

To understand how Pakistan’s increasingly advanced arsenals could connect to this hope-filled future, read Mr. Flurry’s commentary “Pakistan and the Shah of Iran” and his free booklet Nuclear Armageddon Is ‘At the Door.’