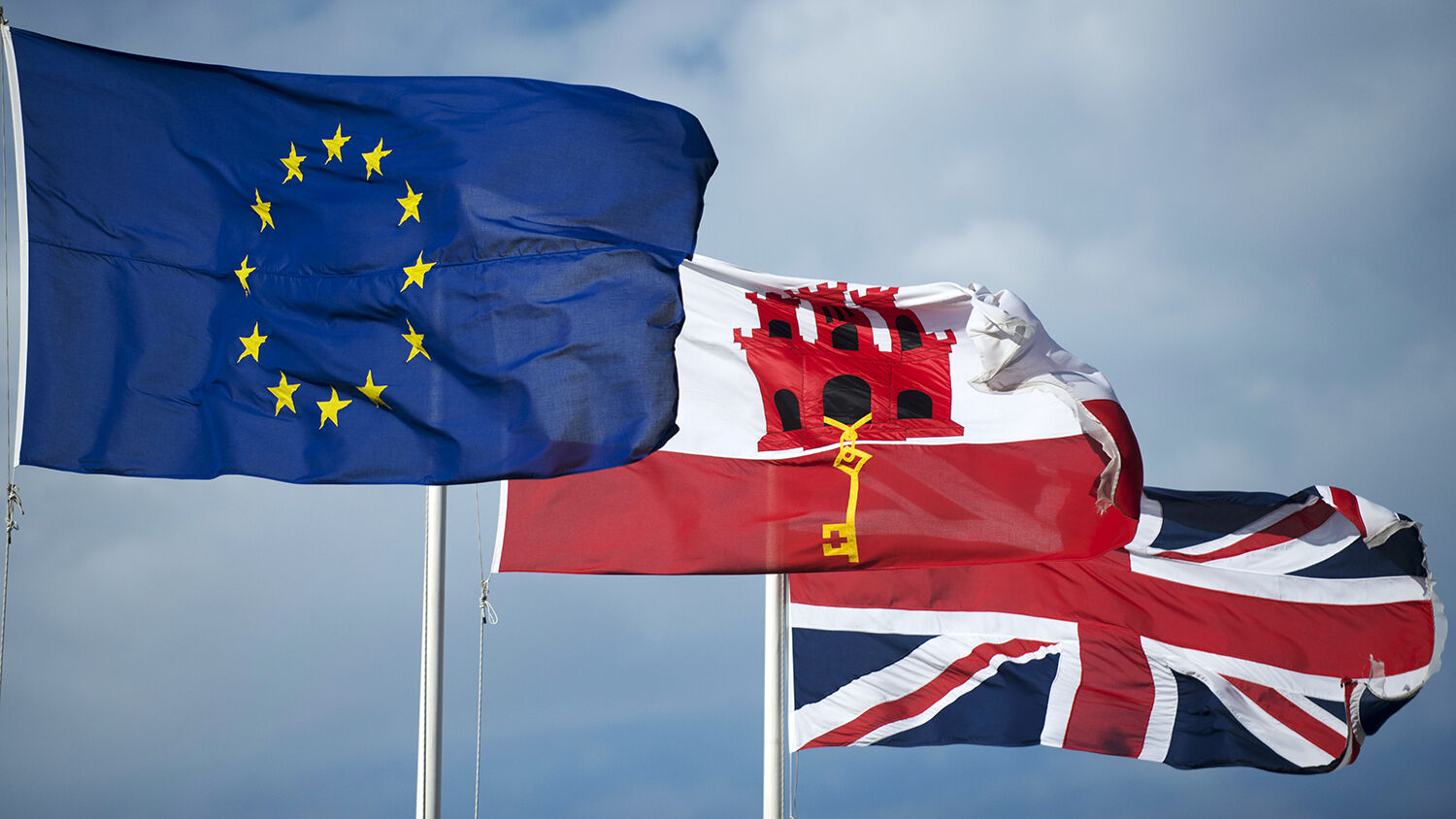 The EU flag flies next to Gibraltar’s flag (center) and the Union Jack in Gibraltar on January 31.
JORGE GUERRERO/AFP via Getty Images

The United Kingdom officially exited the European Union on January 31 in a stunning fulfillment of what the Trumpet has been forecasting for decades. Now, Brexit seems to be precipitating the realization of another Trumpet forecast: Britain’s loss of Gibraltar and the Falkland Islands.

Spain has worked to regain Gibraltar for years, but it has been relatively unsuccessful. Yet it has maintained the struggle, emboldened by weakening British resolve epitomized by former Prime Minister Tony Blair who tried to hand Gibraltar over to Spain in an effort to improve UK-EU relations.

Ever since Spain ceded Gibraltar to Britain under the terms of the 1713 Treaty of Utrecht, it has been working to regain control of the valuable island, recently demanding the “decolonization” of the territory.

In the 19th century, Britain’s naval base in Gibraltar was an important stopping point for vessels en route to India. During World War ii, British possession of Gibraltar gave the Allies key control of access to the Mediterranean Sea. Today, as a British possession, it is one of the wealthiest areas of the European Union.

On April 14, 2015, Gibraltar’s chief minister, Fabia Picardo, said that remaining in the EU would be in its best economic interests. Gibraltar’s independent economy does more trade with Europe than with the UK; therefore, staying in the EU makes financial sense for Gibraltar. But despite having voted to remain a part of the EU, the inhabitants of the island are incredibly patriotic, with 99 percent of the population voting to remain part of Britain in its most recent referendum.

But now, with the precipitous decline of the British Empire, Brexit seems to have further muddied the waters.

Article 50 of the EU Council declares that any decision to be made on the future of Gibraltar would have to be decided by Britain and Spain, without Gibraltar’s involvement. Those living in Gibraltar responded with outrage. Spain, however, welcomed it as the first step toward finally reclaiming “the Rock.”

Now that Brexit has actually happened, Spanish authorities are claiming to have an “advantageous” position in regards to the acquisition of Gibraltar. Britain’s weakening resolve is encapsulated in the “memorandum of understanding” it struck with Spain, which recognizes the need for Spain’s approval between any future EU-Gibraltar agreements. In addition, Article 50 states:

Brexit has emboldened Spain in its pursuit of Gibraltar. It has allowed the EU to be partial to Spain in the negotiations, not neutral as it had been when the UK was still part of the EU. With some help from Britain, Spain seems to be as close as it has ever been to successfully reacquiring Gibraltar.

Britain is facing a similar situation with the Falkland Islands in South America. In 1982, Argentina attempted to illegally seize the islands from Britain’s control. Although Britain came out the victor, in the 38 years since, Argentina has not given up its claim to the islands.

In 2006, then Vice President Julio Cobos declared that Argentina’s aim was to “recover this territory that is ours, that belongs to us.” Brexit seems to have made this easier.

Argentine officials believe that Brexit provides a boost to their claim over the Falklands. Daniel Filmus, Argentina’s secretary of Malvinas (Argentina’s name for the Falklands), said, “Brexit changes European politics.”

Herbert W. Armstrong, editor in chief of the Plain Truth magazine, predecessor to the Trumpet, used the Bible to predict the UK would eventually leave the EU. He also predicted it would also lose the valuable sea gates of Gibraltar and the Falkland Islands.

These nations were to be the recipients of unconditional promises made to Abraham. One such promise was that his “seed shall possess the gate of his enemies,” referring to sea gates or strategic passageways (Genesis 22:17). Indeed, since the 1800s, America and Britain have possessed the world’s major sea gates.

But just as the Bible prophesies America’s and Britain’s rise, it also foretells their fall. God warned His people that if they disobeyed His law they would be cursed for their sins (Deuteronomy 28:15). Today, America and Britain are breaking God’s perfect law of love. And as such, they are destined to lose control of the world’s strategic sea gates—one of the curses for sin (verse 52). The U.S. and Britain have lost control of the Suez Canal, Panama Canal, Singapore, Malta, Hong Kong and South Africa. Only Gibraltar and the Falklands remain, but these too are about to be lost.

Mr. Armstrong correctly prophesied, decades ago, that Britain would leave the EU; and he also prophesied that the United States and Britain would lose all of their strategic sea gates. This is another major prophecy on the verge of being fulfilled. To fully understand these prophecies and why they are important in this end time, read “Changing of the Guard” in our free booklet He Was Right.