The decline of U.S.-British control over the world’s sea gates 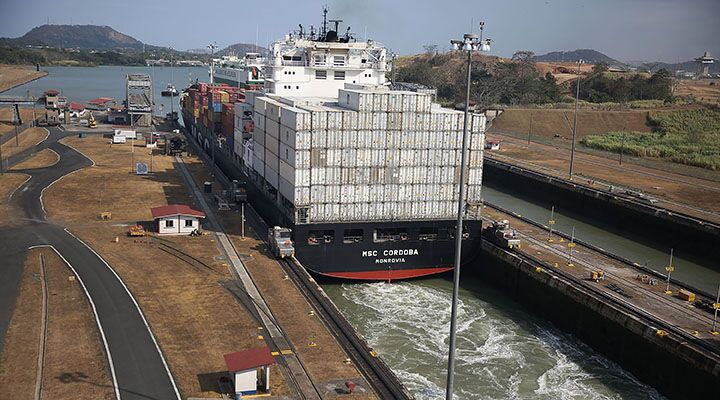 The decline of U.S.-British control over the world’s sea gates

You’re sitting inside a fenced courtyard where all the gates are locked. At each gate stands an armed guard who will not allow you to leave. You are where?

The correct answer is prison.

Now imagine those burly guards laying down their weapons and handing over their keys to the inmates. That’s essentially what the United States and Britain have done. Prior to World War ii, they controlled every major sea gate in the world. These “gates,” as they are called in the Bible, proved indispensable to Allied success during World War ii. Since that time, however, the U.S. and Britain have, without a fight, surrendered their control as gatekeepers.

Herbert W. Armstrong listed a few of the most strategic passageways in the October 1954 Plain Truth: Gibraltar, Suez, Singapore and the Panama Canal. The United States and Britain gained control of these and many others after about a.d. 1800 because of the unconditional birthright promises God made to Abraham’s seed. One of the blessings promised modern-day Israel (U.S. and Britain primarily) was controlling the “gates” of their enemies (Genesis 22:17; 24:60). The fact that our peoples acquired these geographic gateways itself proves our biblical identity. “We must be modern Israel,” Mr. Armstrong wrote.

Further proof can be found in the fact that our peoples have since lost control of those passageways. This is what God said would happen. Mr. Armstrong wrote in 1980, “As the ‘pride of our power’ continues to be broken, as the British continue to lose their foreign sea gates and possessions around the Earth, as America signs away ownership of the Panama Canal—control over this vital sea gate … this focal prophecy alone represents giant proof as to where the modern ‘remnant’ of the peoples of Israel resides today!” (The United States and Britain in Prophecy).

For this reason—the fact that Mr. Armstrong knew the Bible prophesied of the latter-day rise and fall of the American and British peoples—his magazine, the Plain Truth, was able to predict the loss of several sea gates, well in advance of their actual occurrence.

On July 26, 1956, President Nasser of Egypt seized control of the Suez Canal from the British. Two weeks later, on August 5, Mr. Armstrong wrote an article that was printed in the September 1956 Plain Truth. In it, he said the Suez crisis was of “life-and-death concern for Great Britain.” He said the British Empire had attained greatness largely because of its vast shipping by sea. “If Nasser now can take over and retain Suez, Britain’s life-line is severed.” In effect, Mr. Armstrong was saying it would signal the end of the British Empire.

Nearly two months after that article was written, on October 31, British and French forces invaded Egypt for the express purpose of gaining control of the Suez sea gate. Egypt retaliated by sinking 40 ships in the canal. The United Nations, led by the U.S., intervened in November to arrange a “truce”—which amounted to little more than a British defeat. British forces withdrew by the end of the year.

Let us return to the article Mr. Armstrong wrote on August 5, months before the conflict was resolved. He said, “The probable outcome of this Suez controversy—not specifically or directly prophesied in the Bible—is that Britain has lost control of Suez for the rest of this age, and will not be able to gain it back.”

He was right. Britain never regained control of the Suez. He was also correct to say the clash was of “life-and-death” import for Britain’s empire. Ten years after the Suez crisis, on July 31, 1966, the British Colonial Office in London shut down. The British Empire was officially dead.

A year before the Colonial Office closure sounded the empire’s death knell, Singapore withdrew from the British-backed Malaysian Federation to declare independence. The Plain Truth told its readers in the October 1965 issue that this was yet another British defeat.

Britain had acquired this little island gateway linking the Indian Ocean to the Far East in an 1824 treaty. It had prospered under colonial rule, benefiting the British strategically, and thousands of Chinese and Malay immigrants who flocked there for higher wages. Aside from its vital importance during World War ii, the island enclave enabled the British to keep peace on the Malay Peninsula after the war. By 1960, the British had finally crushed repeated Communist attempts to conquer the island.

Just a few years later, however, they surrendered without a fuss. “Maintaining the security of a vast area of the world is tragically no longer deemed important to many,” the Plain Truth wrote in March 1969. “The British are voluntarily giving up one of the world’s most strategic ‘gates.’”

“Going, Going …” read one newspaper headline on Dec. 3, 1999, in reference to America’s handover of the Panama Canal. Twenty-four years earlier, the Plain Truth ran this headline about the canal: “Going … Going … Gone?” (April 5, 1975). The article declared, “Mark my word: the canal will go—if not soon, eventually.” That was written two years before Jimmy Carter signed the controversial treaty with Panama promising U.S. withdrawal by century’s end.

Actually, as early as March 1964, the Plain Truth had warned, “America, before this is all over, is going to lose the Panama Canal unless it repents.” Again, in November 1965: “The United States has done nothing but hedge, crawl, dodge, yield, relinquish, back down and give up ever since we began to build [the canal]!”

Knowing God had broken the pride of America’s power, the Plain Truth then asked, “Can God keep His word? Has He the power to interfere in the course of nations to break our power? Will God make good on His divine promise of punishment upon our peoples? The answer is a thundering yes!”

It then predicted, with confidence, in 1965, “History proves we will lose the canal.”

It correctly predicted how it would happen: “Panama is destined to go—sooner or later. But not in glorious and heroic defeat after faithful resistance—but in utter ignominy. In useless and helpless sacrifice—in disgrace and shame.”

The Plain Truth was also right about who would fill the power void left in the Canal Zone: “And—irony of ironies—we could even see engineers, pilots and technicians from the Communist world manning the canal jobs vacated by Americans!” (July 1977).

That all of these predictions have now happened is astonishing. The U.S. did pull out without a fight—in utter ignominy. Communists did fill many jobs vacated by Americans. As we reported in the Trumpet in 2000, a Hong Kong-based port-facilities company, with Communist connections in Beijing, gained control of the canal’s ports of entry and exit.

In our January 2000 issue, we reminded our readers about what we have said all along—about why the United States lost its most strategic sea gate: “God has ‘broken’ the pride in our power. That is why our people are not stirred by what is happening in Panama. Something is terribly wrong with us! We are afraid to use the power God gave us. … How long must God curse us before we awaken? That is the big question each one of us must answer.”

Of the four major sea gates Mr. Armstrong mentioned in the October 1954 Plain Truth, only Gibraltar has yet to be handed over. But that will happen sometime before the European Union ascends to world dominance.

Already, Britain has seen its hold on the rocky fortress loosen. “If it were expedient, politically or otherwise, Britain would most probably relinquish Gibraltar,” the Plain Truth declared in September 1974.

In August 1982, the Plain Truth predicted, “In the long run, the British government fully intends to negotiate away Gibraltar.”

True enough, in June 1985, the Plain Truth told readers about an agreement forged between Britain and Spain where the British finally agreed to tackle the question of sovereignty in Gibraltar. “For us, this really opens a process of decolonizing the Rock,” a Spanish Foreign Ministry spokesman said.

The Trumpet continued to follow this story throughout the 1990s. In December 1997, we told readers the British would “hand over this mighty Mediterranean sea gate without so much as a whimper!”

Concluding the article, the Trumpet stated, “The fact is that Britain has no objection in principle to handing Gibraltar over to Spain, providing this is acceptable to the majority of the Rock’s inhabitants. In other words—it is just a matter of time.”

Besides the four major sea gates Mr. Armstrong said we would lose, many others have also been surrendered.

Chief among these is Hong Kong. Without a struggle, the British gifted this South China Sea prize to Communist rule in 1997. In Hong Kong, China not only inherited one of the world’s richest trade centers, it took over control of the $380 million naval base built by the British. “Never before has so much, used by so many, gone for so little,” declared a member of Britain’s Ministry of Defense. “With the end of British rule in Hong Kong,” the Trumpet wrote, “we see the final act performed in the closure of an empire—a God-given empire—and the hastening of the fulfillment of the prophesied curses upon a spoiled and ungrateful nation, the British people” (June 1997).

South Africa was another proud possession of the British Empire, controlling the waterway around the southern tip of Africa. But the surrender of South Africa to the Communist-influenced African National Congress ended much of Britain’s control over the Cape of Good Hope. The Trumpet informed its readers about this sea gate handover in July 1994.

The island of Malta is yet another strategic outpost surrendered by Britain. It was vital to British success in the Mediterranean during World War ii. In 1964, however, Britain granted the Maltese political independence. In 1979, the last remaining British troops withdrew from the island, prompting Malta’s prime minister to declare it their “Day of Freedom.” Commenting on the loss of Malta and its Mediterranean island neighbor, Cyprus, the Plain Truth said, “British sea power … has now virtually disappeared from the Mediterranean, once called a ‘British lake’” (September 1979).

Even the lone sea gate victory over the past 50 years did not come without embarrassment. In April 1982, Argentina temporarily seized control of the Falkland Islands from Britain. Located 250 miles off Argentina’s southern coast, this sea gate gives Britain control of the Straits of Magellan. While the British response to the insurrection overwhelmed the Argentinians, it was by no means easy. Argentina downed 34 British aircraft and sank six ships—killing 236. That Argentina would even challenge Britain showed just how much damage had been done to Britain’s image in previous sea gate handovers. Like Gibraltar and the Western Cape, the Falklands’ days under British rule are numbered.

We could go on. But the point is this: During the last half of the 20th century, the United States and Britain have been stripped of almost every critical sea gate in the world. Herbert W. Armstrong prophesied of these strategic losses because he used the Bible as his guide to understand world events.

For that reason, we turn to him to see where this is all leading. The sun has already set on the British Empire, he wrote in the Plain Truth more than three decades ago. And because the U.S. came to power a little later than Britain, its setting sun is just behind Britain’s. But both nations have long since lost the pride they once had in their power. God said this would happen because of their rampant sin and rebellion against His law. For that reason, as Mr. Armstrong concluded in the September 1966 Plain Truth, “Midnight is fast approaching.”