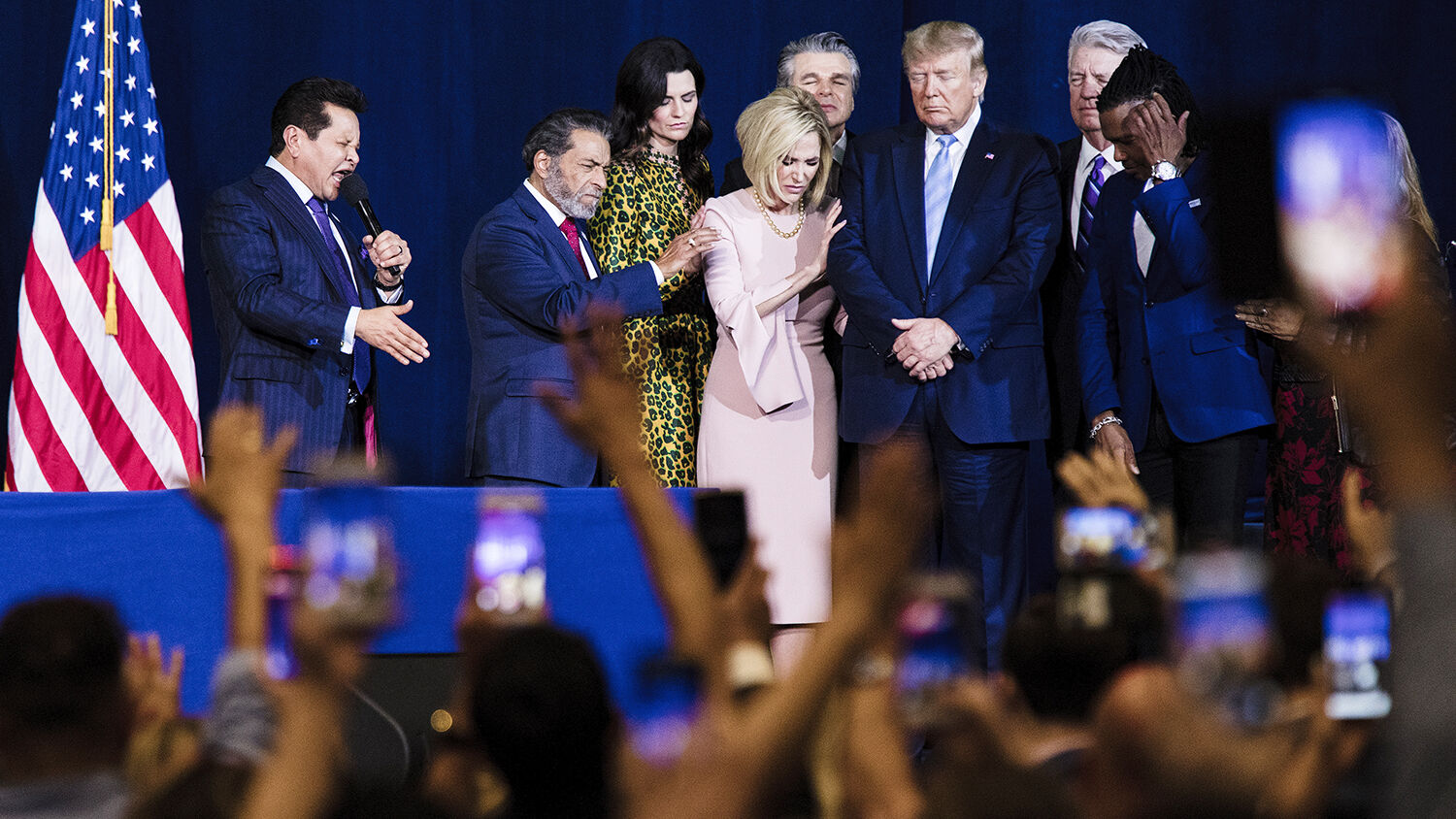 Local religious leaders pray over President Trump at the King Jesus International Ministry during a “Evangelicals for Trump” rally in Miami, Florida, on Friday, January 3.
Scott McIntyre/For The Washington Post via Getty Images

German media opposition to Donald Trump is boiling over.

Since his inauguration, United States President Donald Trump has been under constant criticism in Germany. But recently, Germany’s media has begun to more vehemently oppose his evangelical supporters. “They worship Trump like a saint,” Germany’s Tagesspiegel noted on January 29, pointing out that “Christian Zionists” among the evangelicals are also the source of many of Trump’s policies (Trumpet translation throughout).

Germany’s growing opposition to President Trump and his followers gives a strong sign where German-U.S. relations are leading.

Whether it is to relocate the U.S. Embassy, approve the settlements or confront Iran, conservative Christians influence Trump’s Middle East policy.

All Jews should come to Israel, God’s Promised Land. They should colonize it. The state should become strong and powerful. The satanic regime in Iran, which wants to destroy Israel, must be overthrown. When all of this happens, the prophecies will come true and the Messiah will come back to Earth in Jerusalem. All Christians have a duty to participate in this Second Coming, because the return of the Redeemer heralds the end times, the thousand-year peace.

That is the core of Christian Zionist belief of which there are approximately 30 million adherents in the United States. Some are also convinced that the Jews must convert to Christianity before the Messiah comes back.

Though Tagesspiegel uses provocative exaggeration to appeal to its readers, the overall point is true: Evangelicals do influence Mr. Trump’s policies. The president knows he needs their support. In the 2016 presidential election, Mr. Trump received 81 percent of the evangelical vote. A poll from the Public Religion Research Institute showed that a large majority of evangelicals approve of the president’s job and as many as 99 percent opposed his impeachment.

In “Donald Trump: From Merchant Playboy to Conspicuous Christian,” theTrumpet.com managing editor Brad Macdonald showed how widespread this alliance is and how suddenly it formed. At public meetings, in the Oval Office, and at every other conceivable chance, Trump rallies evangelicals behind him. Both Vice President Mike Pence and Secretary of State Mike Pompeo are evangelicals and closely aligned with the nonprofit organization Christians United for Israel, which was founded in 2006 by conservative evangelicals. Tagesspiegel noted:

Pence and Pompeo moved President Donald Trump to withdraw from the nuclear deal with Iran, move the American Embassy to Jerusalem, recognize Israeli settlements, and kill the top Iranian general, [Qassem] Suleimani. If you want to understand Trump’s Middle East policy, you have to deal with the phenomenon of Christian Zionism.

Evangelical Christians who promote a literal interpretation of the Bible are the largest and most influential religious community in the United States. Many of them worship Trump like a saint; they are his most loyal voters. In return, he appoints strictly conservative constitutional judges and is the first U.S. president to speak at a large demonstration of opponents of abortion. Trump’s character deficits are accepted by the evangelicals.

Tagesspiegel continued to point out that many view these developments critically, because “Israel is being instrumentalized by the desire of radical right-wing Christians for redemption.”

In Germany, Mr. Trump is increasingly seen as a man who blindly follows the advice of radical evangelicals to gain their favor. In doing so, he risks the peace of the world and a crisis in the Middle East.

Austrian Roman Catholic theologian, ethicist and U.S. expert Kurt Remele told Germany’s Vatican News, “Trump persistently represents the evangelicals as they see themselves: as a badly treated minority that needs a defender who acts according to the rules of the world.”

Portraying President Trump as a fanatic who is supported by fanatics is well received in Germany. A U.S. study found that only 13 percent of Germans have a positive view of President Trump. He has greater approval in Russia and France (20 percent), Britain (32 percent), Poland (51 percent) and Israel (71 percent).

In reaction to the study’s findings, Frankfurter Rundschau noted that it is “a political maturity mark, one against nationalism and chauvinism,” for Germany. Germans are proud of their opposition to the U.S. president.

But their criticism doesn’t stop with Trump. America, as a whole, is increasingly being portrayed as fanatical. Of all nations, Germany should know the outcome of such hatred.

The Bible, with phenomenal accuracy, revealed that this breakdown of the U.S.-German relationship would occur. It also reveals where this trend will lead.

In his free booklet Great Again, Trumpet editor in chief Gerald Flurry explains in detail where we currently are in Bible prophecy by pointing to a specific prophesied role President Trump plays.

Amos 7 shows that an end-time type of Israel’s King Jeroboam ii would emerge in our day. Concerning Jeroboam ii, 2 Kings 14:27 recounts: “And the Lord said not that he would blot out the name of Israel from under heaven: but he saved them by the hand of Jeroboam the son of Joash.”

Without doubt, America has greatly benefited from President Trump’s time in office. Under his direction, the nation has been experiencing a resurgence in economy, employment and even military strength. But notice what else God records about Jeroboam ii: “And he did that which was evil in the sight of the Lord: he departed not from all the sins of Jeroboam the son of Nebat, who made Israel to sin” (2 Kings 15:28). Jeroboam i led Israel away from God and into false religion—that is Jeroboam’s sin.

This applies directly today. The end-time Jeroboam is prophesied to align with an end-time priest, Amaziah. In “Who Is the Modern-Day Jeroboam?” Mr. Flurry explained:

Mr. Trump received over 80 percent of the white evangelical vote and a large portion of the Catholic vote. He really is leading most of America’s “religious” people. But where is he leading them? …

Amaziah’s message to Jeroboam is, “The land is not able to bear all his words.” What “words” are so difficult to bear? Amaziah explains: “For thus Amos saith, Jeroboam shall die by the sword, and Israel shall surely be led away captive out of their own land” (Amos 7:11).

Amaziah is identified as the “priest of Bethel.” “Bethel” means house of God. Amaziah came from within God’s own Church, but he rejected God and allied himself with a false religious movement that influences American politics. In the end, Amaziah causes the American government to reject God’s message! This enrages God to the point that He will bring a prophesied captivity on America. God always punishes in love to bring about repentance. But if the recipients of God’s message would heed God’s warning and repent, He wouldn’t need to punish them!

But because this religious movement and the American government reject this message, God will bring about the punishment. This is where Germany comes into play.

The Prophet Amos warns Amaziah: “Now therefore hear thou the word of the Lord: Thou sayest, Prophesy not against Israel, and drop not thy word against the house of Isaac. Therefore thus saith the Lord; Thy wife shall be an harlot in the city, and thy sons and thy daughters shall fall by the sword, and thy land shall be divided by line; and thou shalt die in a polluted land: and Israel shall surely go into captivity forth of his land” (Amos 7:16-17).

Anciently, Assyria, modern-day Germany, took Israel captive. Our booklet Germany and the Holy Roman Empire proves this fact. This booklet connects various other prophesies that show God will use Germany again to execute His punishment in this end time.

This makes Germany’s growing hatred for President Trump and his evangelical support deeply prophetic. God is bringing captivity on America. Many will repent and turn to God while in German captivity. Christ will return to this Earth, but the Bible reveals that He will return under different circumstances than evangelical Christians believe (Matthew 24). To understand this wonderful future, request your free copy of Great Again, by Gerald Flurry.