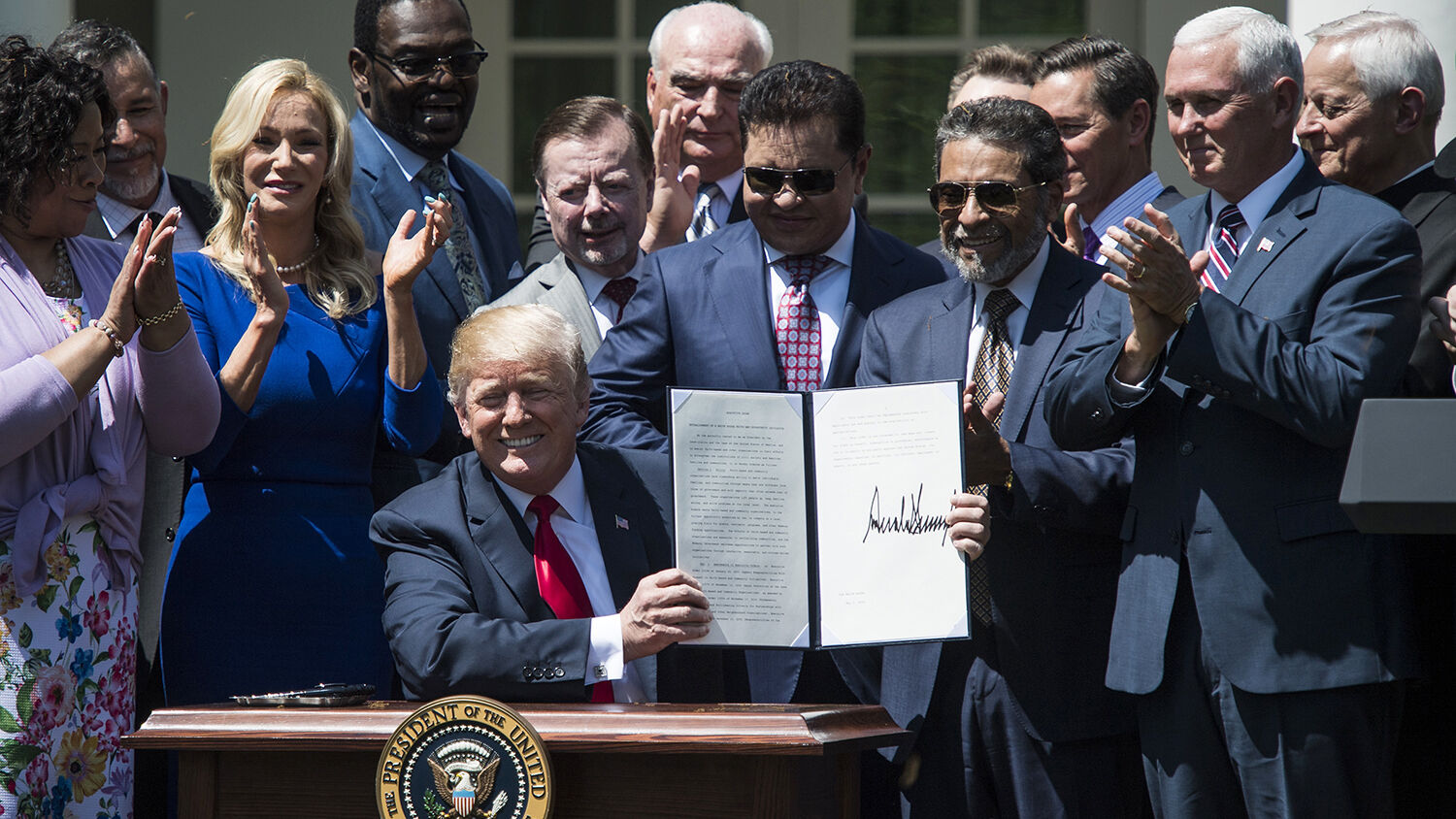 President Trump signs an Executive Order on the Establishment of a White House Faith and Opportunity Initiative during a National Day of Prayer event in the Rose Garden of the White House on May 3, 2018, in Washington, D.C.
Jabin Botsford/The Washington Post via Getty Images

A movement with the appearance of religiousness and piety is gaining strength in America today.

The Democratic Party’s push to impeach United States President Donald Trump is gaining steam. There are 228 Democrats in the House of Representatives who publicly support the impeachment inquiry, and it only takes 218 to impeach the president. The betting website PredictIt has odds of President Trump’s impeachment at $0.79 against the dollar, which means people are betting there is a 79 percent chance Mr. Trump will get impeached.

The White House is cranking up its support for evangelical Christians.

On October 29, two dozen evangelical leaders met and prayed with President Trump in the Roosevelt Room at the White House; they assured him that evangelicals across America support him. Two days later, the Trump administration promised to reverse Obama-era policies restricting federal funds from flowing to Christian adoption organizations that refused to allow homosexuals and transgenders to adopt children.

The White House also announced that televangelist Paula White, who has served as a sort of spiritual adviser to the president, will advise the Trump administration’s Faith and Opportunity Initiative. This initiative coordinates federal government outreaches to religious communities. And on November 5, White launched a prayer effort for the president, asking God to protect him.

During the 2016 presidential election, roughly 81 percent of white evangelical voters cast a ballot for Donald Trump. That means almost half of President Trump’s supporters (over 29 million people) are white evangelicals. So as attempts to impeach the president mount, Mr. Trump will undoubtedly turn more and more to his evangelical base. He will want the support of every evangelical Christian he can find to win reelection.

Beyond the realpolitiks of catering to supporters, Bible prophecy predicts that an end-time leader in the United States will gain strong support from a religious movement. (Herbert W. Armstrong’s book The United States and Britain in Prophecy explains how Bible prophecies directed toward end-time Israel actually apply to the United States and Britain.) A prophecy in Amos 7 speaks of a time when America is ruled by a type of the ancient Israelite King Jeroboam ii. A prophet from God warns this king about the nation’s imminent destruction, but the king refuses to listen and his religious advisers turn against the prophet.

“Amos 7 is an end-time prophecy about America,” Trumpet editor in chief Gerald Flurry wrote in the January 2019 issue of the Philadelphia Trumpet. “This passage in Amos speaks of a prophet warning Jeroboam of God’s impending judgment. God says He is measuring destruction against Israel—which in prophetic terms means America. He also warns, ‘I will rise against the house of Jeroboam with the sword’ (verse 9). This prophecy then describes a religious man, ‘Amaziah the priest of Bethel,’ speaking to Jeroboam and conspiring to expel the man delivering this warning from the country. This Amaziah then goes to God’s prophet on Jeroboam’s behalf and says, ‘O thou seer, go, flee thee away into the land of Judah, and there eat bread, and prophesy there: But prophesy not again any more at Bethel: for it is the king’s chapel, and it is the king’s court’ (verses 12-13).”

It is easy to see how the radical left is trying to destroy Judeo-Christian moral values in the U.S. But the Bible also foretells that a movement with the appearance of religiousness and piety will gain influence in America and try to stop God’s prophecies from being declared to the American people. To avoid being deceived, you have to “prove all things” from the Bible (1 Thessalonians 5:21), but very few are willing to do so.

What the Bible prophesies concerning the United States in the end time is very different from what most religious preachers teach. Request Gerald Flurry’s free booklet Great Again for an explanation of why America is rapidly falling and why its greatest glory ever is yet ahead. You need this understanding to see through the nation’s political turmoil.