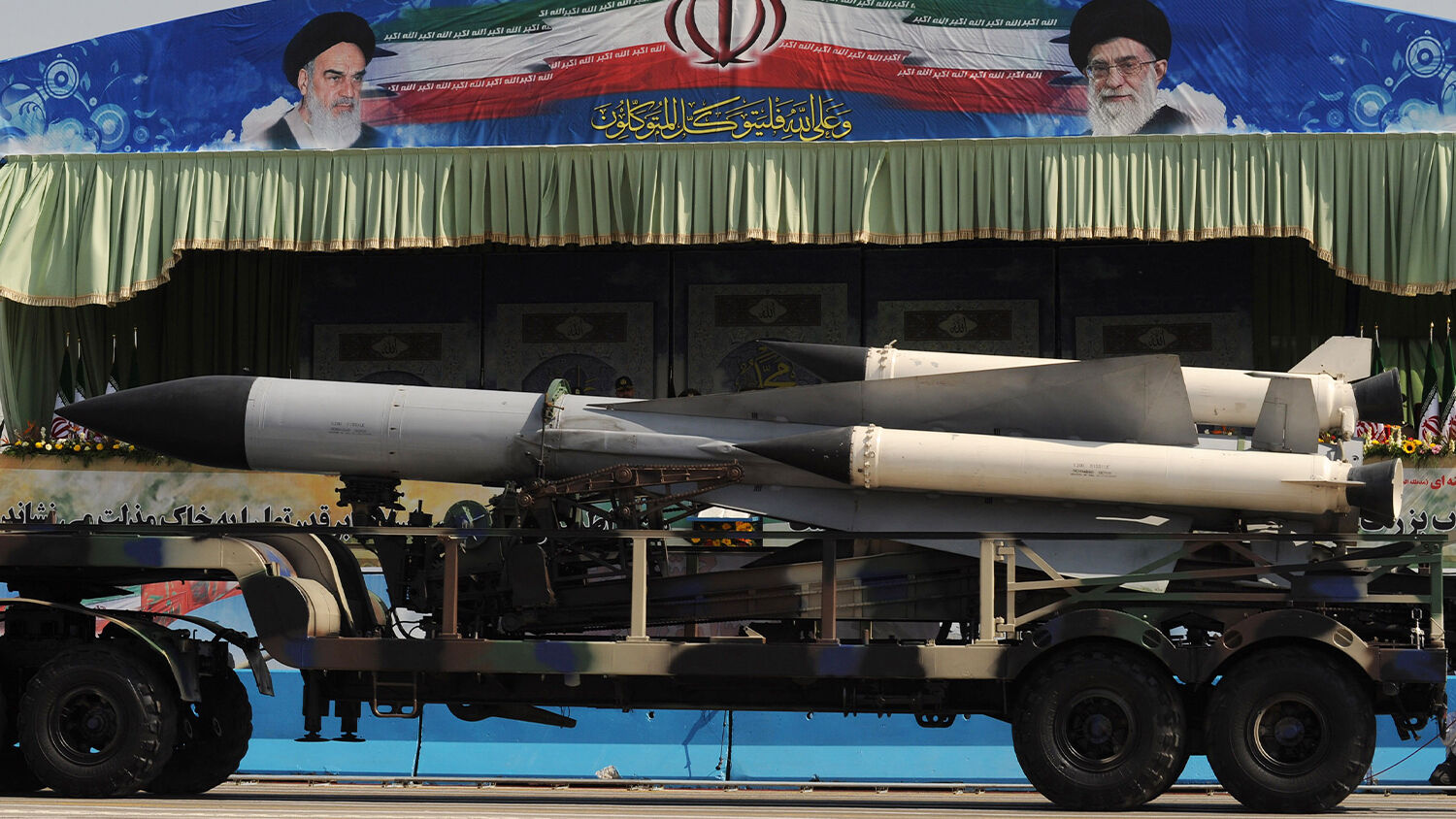 Ballistic missiles during a parade commemorating the 31st anniversary of Iran-Iraq war on September 22, 2011 in Tehran, Iran.
Kaveh Kazemi/Getty Images

Despite several reports, the majority of the world chooses to deny the assertion that Iran wants to build a nuclear bomb. Last week, former executive director of the International Institute for Security Studies Mark Fitzpatrick asked, “Is Iran building the bomb?” He answered, “No, Iran has not restarted its nuclear weapons program.” While this may or may not be true, what Iran has done is far more dangerous.

It has significantly reduced the time it would take to build a nuclear bomb.

Just two years ago, experts estimated Iran’s breakout time to build the bomb to be as little as seven to 12 months. However, as a result of Iran taking several steps away from the terms of the Joint Comprehensive Plan of Action by increasing its uranium stockpile and enrichment purity, experts now believe Iran’s breakout time to be about four to five months. According to the New York Times, some believe it is even as low as two months. This reduced time frame would make it even easier for Iran to build a nuclear bomb if it chooses to do so.

This raises the question: Does Iran want to build a nuclear bomb?

On January 18, the Daily Mail released a new exclusive report providing additional proof that Iran has intended to build nuclear warheads as far back as 2002. According to the Daily Mail, a document dated Nov. 28, 2002, reported on a “senior Iranian official requesting the parameters of a warhead fitted on a missile.”

A note scribbled in the top left corner of the document read: “In the name of God. Right now in a treatment process. Please archive the original script of the document. Fakhrizadeh.” Moshen Fakhrizadeh is an officer in Iran’s Islamic Revolutionary Guard Corps; he played a lead role in Iran’s nuclear program and can be seen in photos next to Iranian Supreme Leader Ayatollah Ali Khamenei.

According to the Daily Mail, this document proves that, despite its claims otherwise, “Iran intended to become a fully operational nuclear state” and that there is a “military dimension” to its nuclear program.

And this is only one document of a growing trove of condemning evidence.

In The Iran Threat, Alireza Jafarzadeh explains how Iran managed to hide its nuclear program from the world for 18 years before he first exposed it in 2002. Iran concealed its actions through the use of several front companies. Prior to 2002, Iran used private firms as camouflage for acquiring expertise, conducting research, and purchasing equipment and material required to build a nuclear weapons program.

“This allowed the regime to buy nuclear-related materials from a number of foreign countries under the cover of benign civil purchases,” writes Jafarzadeh. Many nations justified these sales simply “because they were written up as sales to nonmilitary and nongovernmental entities.” Iran’s network of front companies allowed it to hide what it was doing to partially avoid suspicion.

When the program was finally exposed, Iran quickly put it under the control of the Islamic Revolutionary Guard Corps and literally moved it underground. Iran is one of the most mountainous countries in the world, with 50 percent of the country covered by mountains; burying its facilities under these mountains has made the nuclear program practically untraceable.

In a second revelation on March 24, 2005, Jafarzadeh made an announcement to the International Atomic Energy Agency (iaea) in Washington, D.C. His contacts in Iran had discovered illegal operations at the Parchin Military Complex, 19 miles southeast of Tehran. According to the report, the Iranian Defense Ministry had secretly built an underground nuclear development facility.

In late 2005, proof in the form of satellite imagery and firsthand accounts emerged that nuclear operations at the facility were underway. The Parchin facility was being used for explosives testing, the development of a nuclear core, and the production of a nuclear warhead.

Not far from the Parchin facility, Iran’s Hemmat Industries Group manufactures Shahab-3 and Ghadar ballistic missiles—both of which are capable of carrying nuclear warheads.

When the iaea confronted Iran about the facility, it was initially not allowed to inspect it. About a year later, Iran finally invited inspectors to take soil samples. Inspectors reported seeing several new renovations to and mass terraforming around the facility—an obvious indicator that Iran was hiding something.

An Oct. 23, 2018, report by the Institute for Science and International Security confirmed these reports and published proof in the form of documents, photos and satellite imagery of the nuclear activities Iran has conducted at the Parchin facility.

A Nov. 20, 2018, report by David Albright, founder and current president of the Institute for Science and International Security, said that by the end of 2003, Iran had put into place “the infrastructure for a comprehensive nuclear weapons program” intended to build five nuclear warheads, each with a 10-kiloton explosive yield.

On Jan. 11, 2019, Albright reported on the newly discovered Project 110, which was tasked with the smelting and forging of “uranium metal components for nuclear weapons.” The activities, which were previously hid from the world, were conducted in separate facilities in the Parchin Military Complex.

Two months ago, Iran had resumed uranium enrichment at its Fordow facility—the only facility capable of achieving 20 percent uranium purity, which is only a short technical step away from weapons-grade uranium necessary for building a nuclear bomb.

Most recently, on January 5, Iran announced it would no longer abide by the restrictions of the nuclear deal. “It’s finished,” said Albright. “If there’s no limitation on production, then there is no deal.”

This history shows that Iran has intended to build a nuclear bomb from the beginning. Its recent behavior defying the nuclear deal has brought the bomb even closer within reach.

The more Iran pushes, however, the more resistance it receives from Europe.

While traditionally a key proponent of the nuclear agreement with Iran, continually working to keep the deal alive, Europe has begun to show signs of resistance against Iran.

In addition to its maritime security mission in the Persian Gulf, three European nations—Britain, France and Germany—triggered the nuclear deal’s Dispute Resolution Mechanism on January 14, expressing concern over Iran’s ballistic missile development and nuclear program. If no solution is reached over the next 65 days, then the United Nations Security Council will have to vote on reimposing sanctions lifted by the Joint Comprehensive Plan of Action. Russia or China will probably veto any meaningful sanctions, but it is still a symbolic step.

While this is only a small step, much greater confrontation is on the horizon.

The Bible prophesies that in the end time, just before the return of Jesus Christ, a Middle Eastern power bloc called “the king of the south” will arise with a very pushy foreign policy.

As far back as 1994, Trumpet editor in chief Gerald Flurry identified the king of the south as radical Islamic extremism, led by Iran. This nation is the world’s largest state sponsor of terrorism, and its Twelver Shiism beliefs make it one of the most erratic and irrational nations in the world.

In The King of the South, Mr. Flurry proves that Iran is the nation leading this Islamic power. He writes:

The king of the south is about state-sponsored terrorism. That is how Iran became king! … It is a nation that is always pushy in its foreign policy. It pushes until it starts a war. …

Iran’s unrelenting push for the nuclear bomb is pushing the world closer to World War iii. However, Iran will not succeed in its ultimate goal of establishing an Islamic caliphate headquartered in Jerusalem.

Daniel 11:40 says that Iran’s push causes a mighty German-led European Union to “come against him like a whirlwind.” This confrontation leads directly into Daniel 12:1, which describes “a time of trouble, such as never was.”

Iran is pushing the world toward this prophesied war, largely through its nuclear program. The closer Iran gets to the nuclear bomb, the more uneasy Europe becomes and the more it stands up to Iran.

Continue to watch for the complete collapse of the nuclear agreement and for Europe to stand up against the Iranian push.